LANSING — Federal agencies are assisting state authorities in an ongoing investigation of former Michigan House Speaker Lee Chatfield, a revelation that points to a broader law enforcement probe of the Levering Republican than previously known.

Michigan Attorney General Dana Nessel’s office recently told a judge “there are other federal agencies that are assisting” in the investigation, according to a new transcript of a hearing over search warrant records sought by Bridge Michigan and the Detroit Free Press.

Michael Frezza, an assistant attorney general with Nessel’s Public Integrity Unit, did not name the federal agencies involved in the Chatfield probe. The investigation was initially led by the Michigan State Police, who he said had been more active early on but “remain involved” as of late October.

State authorities began investigating Chatfield early this year after his sister-in-law accused him of sexually assaulting her beginning when she was a 15- or 16-year-old as part of a sexual relationship that continued during his time in office, a story she first publicly shared in interviews with Bridge.

The probe has since expanded to include allegations of potential embezzlement, bribery and campaign finance violations, according to affidavits obtained by The Detroit News through what the state has called an accidental release of investigative documents by a district court judge.

Chatfield, through his attorney Mary Chartier, has repeatedly denied any criminal wrongdoing.

“It doesn’t matter to Mr. Chatfield who investigates the case — he believes that all financial actions were in accord with the law,” Chartier said Wednesday.

Nessel’s office declined to comment on the federal assistance, citing the ongoing investigation. A spokesperson for Mark Totten, the U.S. Attorney for the Western District of Michigan, did not immediately respond to an email.

Frezza has disclosed elements of the ongoing Chatfield probe during a separate legal dispute over public access to affidavits, which the attorney general’s office used to show probable cause to obtain search warrants from a series of judges.

“Without going into specific detail, this investigation involves a series of former Michigan officials, current officials, lobbyists, governmental appointees, at high levels, and other government employees,” Frezza said in a Nov. 21 hearing.

Some of the search warrant affidavits the attorney general wants to suppress include "financial information from PACs and 501(c)(4) organizations that law enforcement believes may be involved in crimes," Frezza wrote in a Nov. 18 court filing.

Chatfield was a prolific fundraiser who used four separate political action committees to raise nearly $5.2 million over a six-year period in the Legislature, an unprecedented amount for a legislator, according to earlier reporting by Bridge and the Michigan Campaign Finance Network.

Chatfield’s nonprofit Peninsula Fund, which is subject to federal rules, raised more than $750,000 his last year in office and spent $454,337 on food, dining, travel and entertainment, according to IRS documents.

Chatfield "believes that the law has been complied with and that the fund has met all its legal obligations,” his attorney previously told Bridge.

The Detroit News has published several reports based on search warrant affidavits it obtained, including an allegation that Chatfield's brother and sister-in-law told investigators they would give the lawmaker money after cashing checks provided by a political consultant who oversaw Chatfield’s various fundraising accounts.

A prominent Democratic lawmaker said Wednesday there should be at least one other entity investigating Chatfield: the Michigan House. Departing Minority Leader Donna Lasinski, D-Scio Township, repeated her criticism of House Republicans for failing to examine the full scope of Chatfield's actions during his time leading the lower chamber.

Departing House Speaker Jason Wentworth, R-Farwell, recently said his team pursued a third-party investigation of Chatfield but was asked to hold off by Nessel’s office. Lasinski argued the House still could have found a way to probe Chatfield's conduct — and his use of state resources — without hampering the criminal investigation.

"We all know, there's a difference between criminality and ethical violations,” Laskinski said. “We had every tool and we had every opportunity to look into that, and we were unable to under the previous, now outgoing leadership.”

Lawyers representing Bridge and the Free Press are seeking additional information about the ongoing criminal case through search warrant records the attorney general’s office has sought to shield from public release. At issue are two state laws regarding suppression of search warrant records.

In early November, 54-A District Court Judge Stacia Buchanan ruled that the law the state had been relying on to permanently suppress affidavits is limited to the person whose property was searched or seized.

A separate statute says search warrant affidavits should become public 56 days after they are issued, unless investigators request an extension in order to protect a victim or witness.

The attorney general’s office never requested an extension, so the affidavits and related documents should be publicly available, Buchanan ruled, ordering the district court to release the affidavits by Nov. 22.

But on Nov. 21, Ingham County Circuit Court Judge Wanda Stokes granted a request from Nessel’s office to “stay,” or delay, the lower court orders and block release of the documents indefinitely while the attorney general prepared to appeal the district court ruling, which the state has not yet done.

Stokes considered the matter in a court hearing that attorneys for Bridge and the Free Press were not given notice of. There, Frezza argued that the public release of the affidavits could cause professional or personal “embarrassment” to people named in the documents but not necessarily suspected of crimes.

While two of the search warrant affidavits were released to The News “inadvertently by accident,” Frezza argued they should not be released publicly or to other news organizations because “maybe there are folks that didn’t see what The Detroit News published.”

In that hearing, Frezza said the attorney general’s office was also concerned about the release of other affidavits related to the Chatfield case.

Stokes ultimately agreed, ruling against public release of the documents.

The “legislative intent” of the suppression law that the attorney general cited “was to protect an ongoing investigation,” the judge said in a bench ruling. “The Court finds that by making the affidavits public information, there could be genuine harm to the progression of this investigation, or any future one.”

Bridge and the Free Press attorneys have asked Stokes to modify her “stay” order by setting a deadline for how long it should last if and when the state appeals Buchanan’s order. 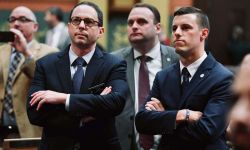