Michigan’s congressional delegation could face sweeping changes in 2022 that have nothing to do with shifting political winds.

The first draft maps designed by a nonpartisan citizens redistricting commission appear to pit seven of Michigan’s 14 incumbents against one another, which could force them to square off in primaries, move or run in districts where they don’t live. 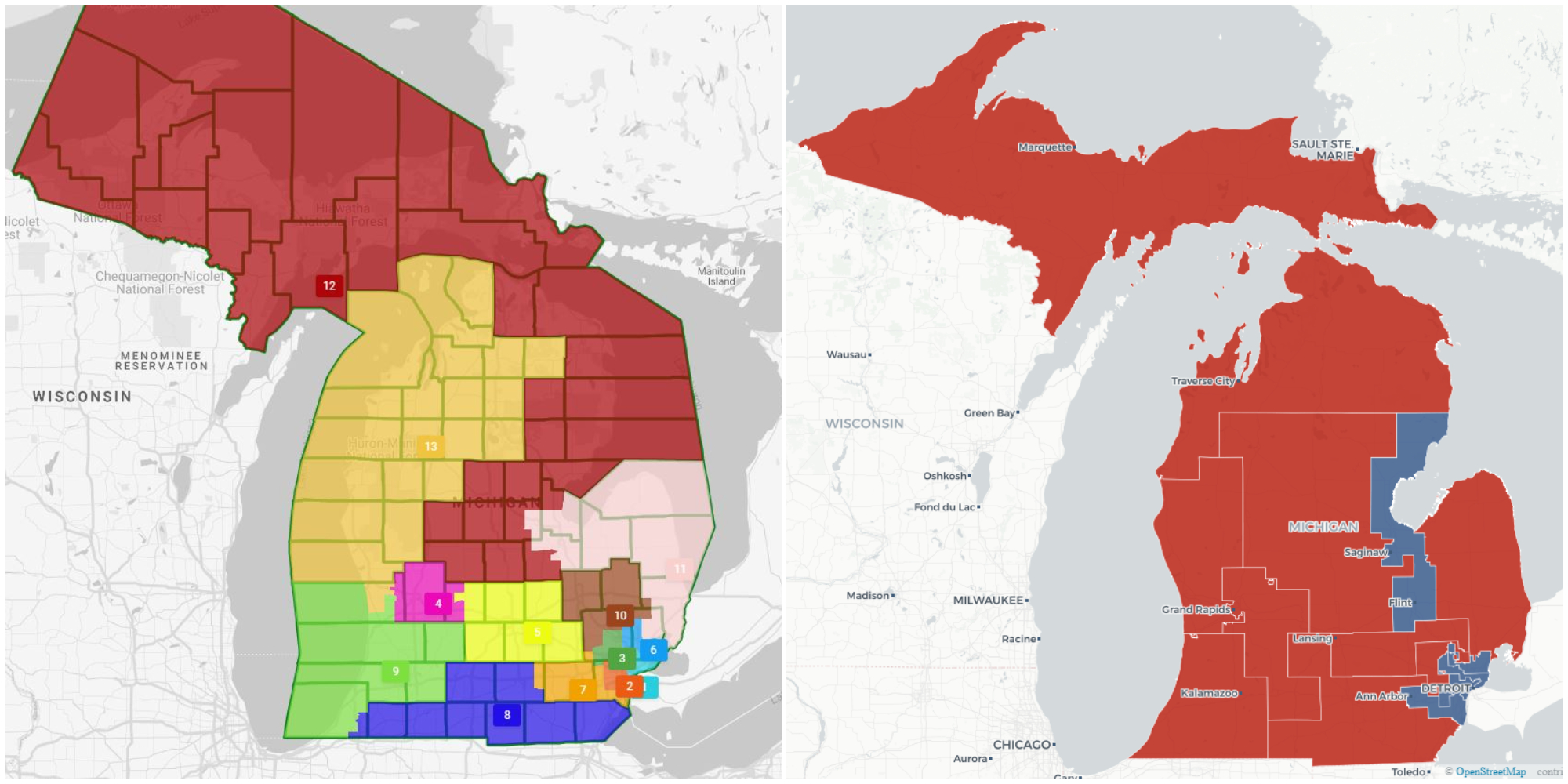 Michigan currently has a 7-7 split in Congress (right) but is losing a seat due to slow growth. The first draft congressional map (left) would pit incumbents against each other and create other districts that would have no incumbents.

The drafts also create two districts that have no incumbents — one in the counties around Lansing and another in the northwest counties of the Lower Peninsula.

Michigan is losing one congressional seat due to stagnant population, declining to 13 districts — and the tentative maps leave the state with just one district, centered in Detroit, with a majority-minority population.

Since the passage of the Voting Rights Act in 1965, which required the preservation of such districts, Michigan has had at least two majority-minority districts.

Like most states, Michigan’s old system allowed the party in charge in the Legislature to draw districts every 10 years after the release of U.S. Census Bureau population counts.

But Michigan voters agreed in 2018 to change the Michigan Constitution to create a nonpartisan commission to draw the districts. The commission is a panel of four Democrats, four Republicans and five independents.

Minority loss: Currently, Reps. Brenda Lawrence, D-Southfield, who is African American, and Rashida Tlaib, D-Detroit, who is Arab American, represent the 14th and 13th districts, each of which is majority-minority.

But under the plan first drafted on Thursday, Tlaib would be the only one in a majority-minority district, with over 63 percent of the population either Black, Hispanic, Asian or another minority. 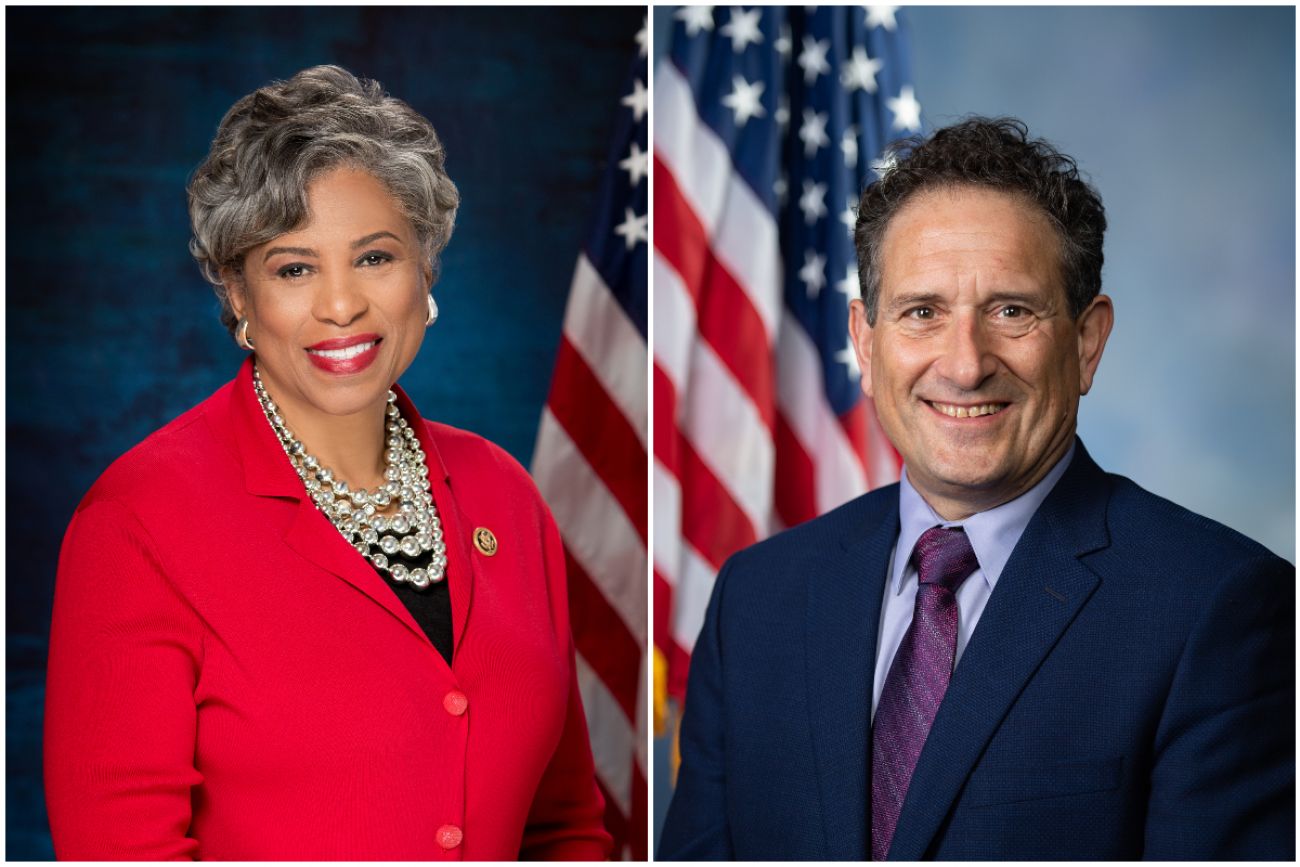 Under a draft redistricting plan, Rep. Brenda Lawrence, D-Southfield, would no longer represent a majority-minority district but instead be in the same district as Rep. Andy Levin, D-Bloomfield Township.

According to the Michigan Independent Citizens Redistricting Commission, that district would be 56 percent non-Hispanic white.

In the past, when partisans drew the maps, they would take into account incumbents and where they lived. The proposed maps show that they are not much of a consideration to the commission.

Slotkin’s current district stretches from the eastern edge of Oakland County to Lansing. 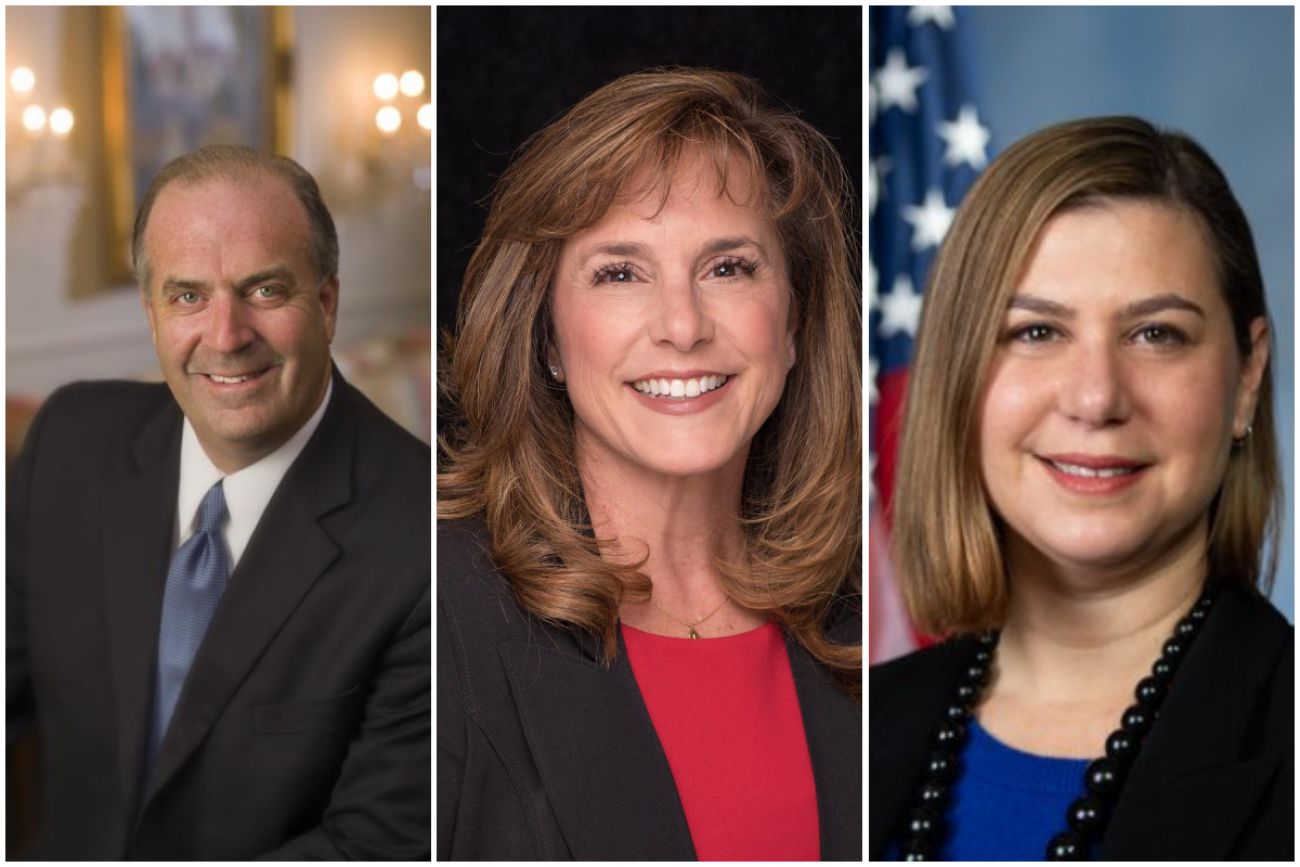 But the new maps create a compact district centered on Lansing — and far from Slotkin’s home in Holly. That would leave her facing her fellow Democrat, Kildee, who saw his district lose numerous northern counties but retain his base in Genesee County.

McClain, who just won office after the retirement of the late Paul Mitchell, would live in the far southeast corner of the new district. She currently represents parts of Macomb County and much of the GOP-rich Thumb region.

But the latest draft map creates a district that includes all of growing Kent County and parts of Ottawa and Ionia counties.

Meijer’s 3rd Congressional District currently includes most of Kent and all of Ionia, Barry and Calhoun counties, which have leaned Republican.

But Kent County voted for President Joe Biden, a Democrat, in 2020 and the region as whole has trended Democratic.

No one home: Two districts were tentatively created that would not have an incumbent. The proposed 5th District would include all of Shiawassee, Livingston, Clinton, Ingham, Eaton and eastern Ionia.

Slotkin represents some of that area now, as does Rep. John Moolenaar, R-Midland, and Meijer.

Likewise, northwest Michigan, now represented by Reps. Jack Bergman, R-Watersmeet, Bill Huizenga, R-Holland and Moolenaar, would be part of a new 13th District that would include 18 entire counties and parts of Ottawa County.

Moolenaar’s home in Midland would be in a new district that runs into the Thumb; Bergman’s district would include all of the Upper Peninsula but stay in the northeastern and central part of the lower peninsula and Huizenga’s district shifts dramatically south.

County borders matter less: In the past, partisans drawing maps were required to try to keep entire counties with districts and, if possible, districts within counties.

But the redistricting commission is not required to do so. The result is many districts — both the state senate ones already proposed and these congressional maps — split counties.

In previous years, those splits were typically in metro Detroit, necessary to include the roughly 775,000 people each district has. But partisans also created incredibly odd shaped districts like Lawrence’s that zigged and zagged across Wayne and Oakland counties.

The city of Midland would be in one district but most of its surrounding county would be in another. Ottawa County, currently entirely in Huizenga’s district, would have people living in three different congressional districts. Macomb County, now represented by Levin and McClain, would be in parts of four districts.

One of those would include a new 6th Congressional District, with parts of eastern Oakland County. It would include Rochester Hills, home of Democratic Rep. Haley Stevens.

But her new district, if she chose to run, would be far different than her current one, which is in Oakland and Wayne counties. She would also represent Sterling Heights, Mount Clemens and St. Clair Shores in Macomb County.