GOP vows fight to keep candidates on Michigan ballot. ‘This is far from over’

Michigan Government
GOP vows fight to keep candidates on Michigan ballot. ‘This is far from over’

LANSING — Michigan Republicans are preparing for a legal fight as they attempt to keep high-profile gubernatorial candidates on the ballot despite an “unprecedented” signature fraud scandal poised to upend the August primary.

“This is far from over,” Michigan GOP Chairman Ron Weiser said in a Tuesday statement, arguing that Democrats who challenged the nominating petitions of Republican candidates are trying to “take away choice” from voters.

The Michigan Bureau of Elections on Monday recommended the Board of State Canvassers keep Perry Johnson, former Detroit Police Chief James Craig and three other Republican governor candidates off the Aug. 2 primary ballot because of widespread signature fraud on required nominating petitions. 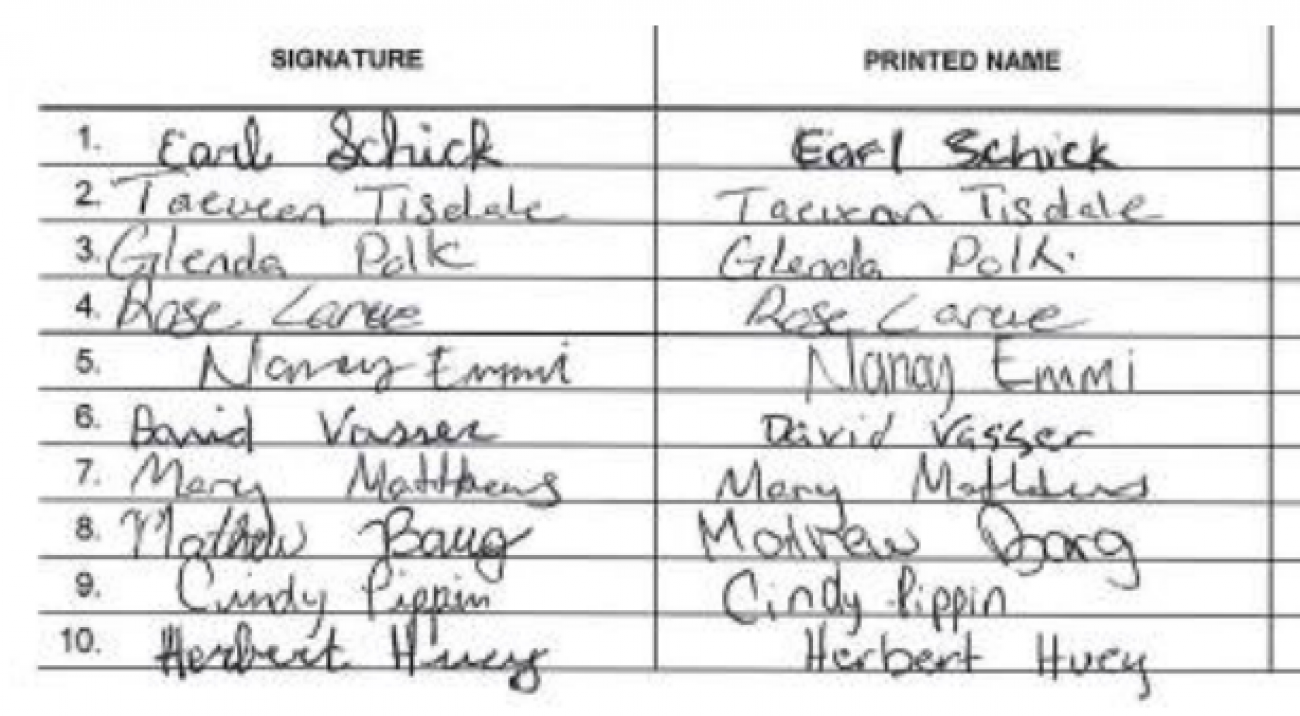 The state says some fraudulent signatures were “more obvious than others,” as seen on this petition for James Craig. “At times fraudulent-petition circulators made little effort to vary handwriting.” (Michigan Bureau of Elections)

A decision is coming this week.

Johnson, the Bloomfield Hills businessman who has pumped millions of his own dollars into his campaign, is expected to send a trio of attorneys to Thursday’s Board of State Canvassers meeting — and later to court, if necessary.

The campaign will argue to keep Johnson on the ballot and could also pursue legal action against paid circulation firms or subcontractors that hired members of an alleged forgery ring responsible for submitting thousands of fake signatures.

Craig, who has led all polling of the GOP gubernatorial field, said Tuesday he will also continue to pursue ballot access.

Democratic Attorney General Dana Nessel should “fully investigate those responsible for defrauding my campaign” and others, Craig said in a statement. “Whether for political or monetary gain, these individuals must be held accountable for their actions.”

Nessel said Tuesday the Bureau of Elections has not yet referred any signature fraud cases to her office but expects that will happen soon. If it does, she promised "extensive investigations where we see evidence of criminal activity."

The bureau is also working to ”refer incidents of apparent fraud to law enforcement for criminal investigation,” according to a staff report, which linked at least some of the paid circulators to First Choice Consulting, a firm run by Shawn Wilmoth of Warren, who did not return a voicemail or text seeking comment.

Wilmoth was convicted of election fraud in Virginia in 2011 but has chalked it up to a "once in a lifetime mistake." In April, Wilmoth told Bridge he was struggling to find Michigan circulators so was paying $20 per signature, an unusually high rate that experts say may have incentivized cheating.

He encouraged all five GOP gubernatorial candidates to drop out of the race.

Brown, a Michigan State Police captain, did so Tuesday morning. He accused paid circulators — who he said had collected signatures for his campaign as independent contractors — of going on a “money grab” by submitting fakes for other candidates.

“I cannot and will not be associated with this activity,” said Brown, whose campaign filed 13,775 signatures collected by accused circulators, according to the Michigan Bureau of Elections.

Circulators that “defrauded these candidates for governor should be prosecuted to the fullest extent of the law,” Michigan GOP spokesperson Gustavo Portela told Bridge Michigan.

But there’s “almost certainly going to be legal action” because of the process the Bureau of Elections used to disqualify signatures, Portela added, suggesting state staff disqualified full petition pages “without verifying each signature.”

Other Republicans, however, said the rules are clear and candidates have followed them for years without trouble.

Jamie Roe, a GOP consultant working with gubernatorial candidate Kevin Rinke, said "it's ultimately the campaign's responsibility” to check the validity of signatures. Rinke’s petitions were not challenged.

"It's dumbfounding that the campaigns let this stuff get through," Roe told Bridge Michigan. "You have to have quality control. The fact that the 'quality guru' is one of them is just amazing,” he added, referencing Johnson, whose campaign has branded him as a “quality guru.”

The Michigan Bureau of Elections developed a new process for weeding out forgeries this year after an initial review revealed an "unprecedented number of fraudulent" signatures on candidate nominating petitions, according to a report released late Monday.

For each candidate, state staffers began by separating petition sheets submitted by the 36 circulators believed to be part of the forgery ring. They then conducted a "targeted signature check" on those sheets and concluded that all signatures were invalid.

But the Michigan GOP and Johnson’s campaign contend that by disqualifying entire sheets, the bureau may have thrown out some legitimate signatures with the fakes.

They pointed to a state law indicating “the invalidity of 1 or more signatures on a petition does not affect the validity” of other signatures on the same sheet.

“We strongly believe they are refusing to count thousands of signatures from legitimate voters who signed the petitions and look forward to winning this fight before the Board, and if necessary, in the courts,” Johnson campaign consultant John Yob said in a statement.

"Some of these candidates will be on the ballot once this goes to court," Michigan GOP Co-Chair Meshawn Maddock added in a tweet.

State staffers began reviewing nominating petitions in late March and began to notice an unusual number of sheets that appeared fraudulent, containing only invalid signatures, according to a Michigan Bureau of Elections report.

Some petitions appeared to have been signed in a "round table" scheme, with circulators passing around and signing each other's sheets so each line had unique handwriting. Others, however, contained "near-identical" handwriting on every signature line.

An unusually large number of petitions showed "no evidence" of typical wear and tear, such as folding, scuffing or clipboard marks, according to the state.

The Michigan Bureau of Elections then compared signatures on those suspect sheets to  versions stored in the Qualified Voter File and found an unusual amount of anomalies, suggesting the forgery ring used an out-of-date list of voters.

There were signatures from voters whose registration had been canceled because they died months or years earlier.

Others contained spelling errors, including a signature on a Johnson petition purportedly from a voter named "Lia" that appeared to instead read "Liar." 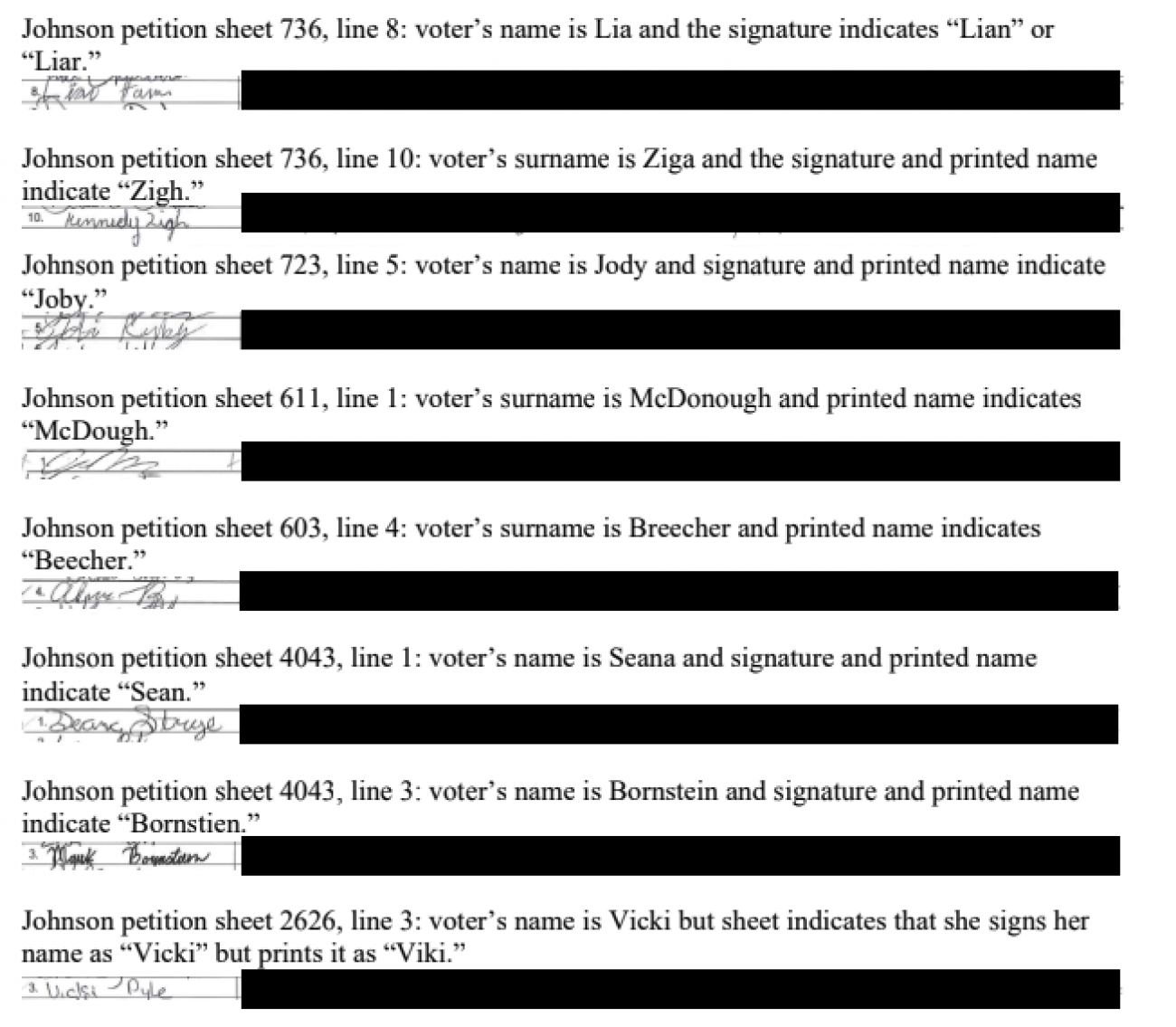 On some Craig petitions, circulators appeared to "intentionally scrawl illegibly" for some or all signatures in an apparent attempt to avoid detection. On others, they "made little effort to vary handwriting," making the forgeries "more obvious." 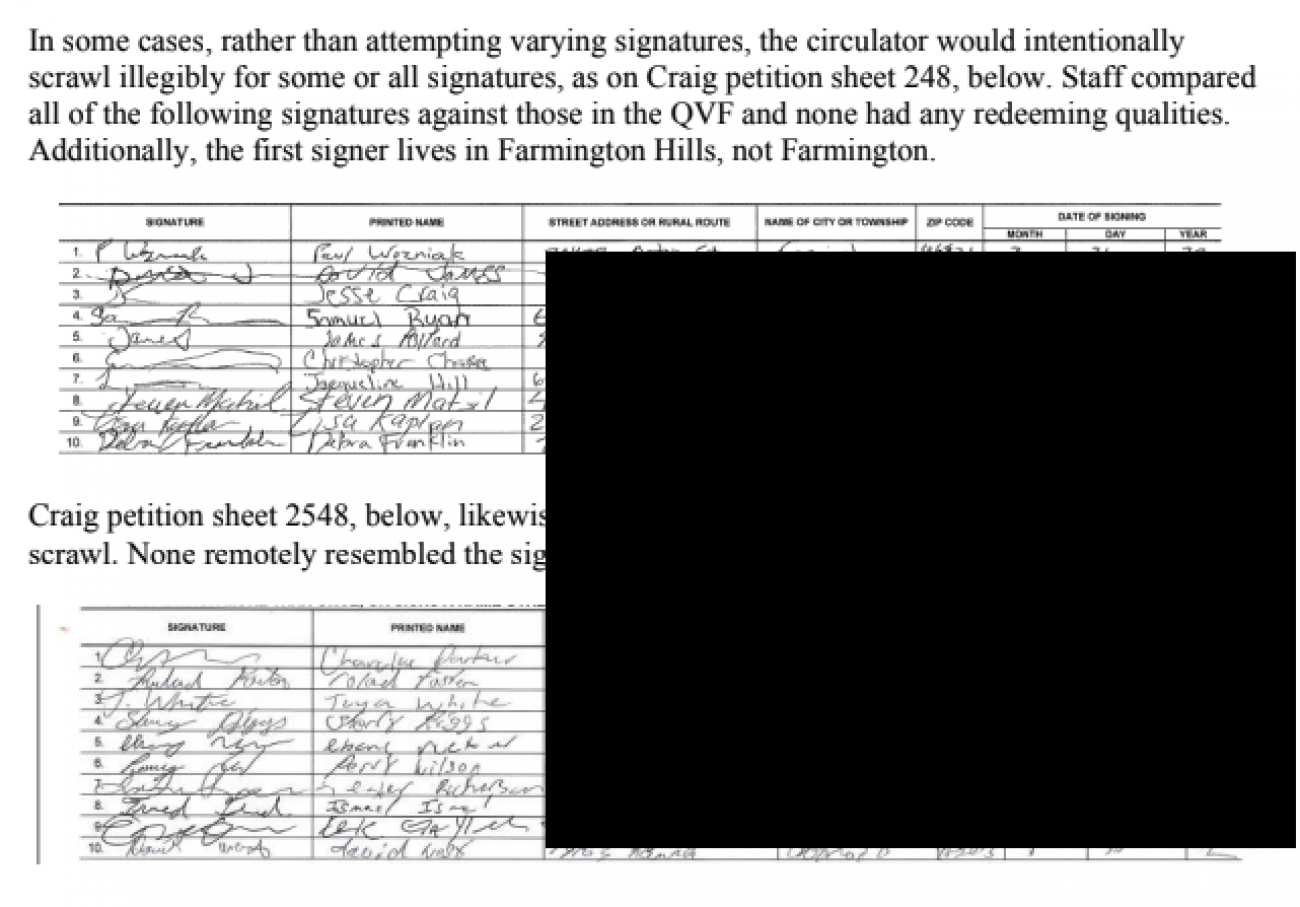 The state says some circulators accused of fraud "would intentionally scrawl illegibly for some or all signatures," as seen here on a petition for James Craig. (Michigan Bureau of Elections)

Democrats on Tuesday produced new affidavits from four voters who said their signatures were forged on nominating petitions for Craig and Johnson. Others "may never know that they were exploited," said Michigan Democratic Party Chair Lavora Barnes.

Republicans who submitted forged signatures “robbed voters of their voice and democratic agency to genuinely support the candidates of their choosing," Barnes said. "They abused a core pillar of the very government they’re running to lead. It’s unacceptable and disqualifying.”

Johnson and Craig can still fight for ballot access before the bipartisan Board of State Canvassers, which is set to meet Thursday, and the Michigan Court of Appeals. They have limited time: the state must finalize the ballot by June 3, 60 days ahead of the primary.

Both candidates have suggested they were “victimized” by the alleged forgers, and the Bureau of Elections said it “does not have reason to believe that any specific candidates or campaigns were aware of the activities of fraudulent-petition circulators.”

But even if they still make the ballot, experts say Craig and Johnson have failed what amounts to an early test of whether they could organize campaigns capable of making the ballot.

“The fact that they were hiring people that were unable to accurately collect signatures was a bad omen for their potential gubernatorial (tenure)," said Andrea Bitely of the Truscott-Rossman public relations firm, who worked as an aide to former Attorney General Bill Schuette, a Republican.

The signature forgery scandal could cap an inauspicious fall for Craig, who left public service for politics to great fanfare last summer, delivering an origin story speech in Jackson, where he was joined by GOP officials like Weiser and Maddock.

Craig entered the race as the presumed frontrunner, but his campaign had problems from the start. He was drowned out by protesters during a launch event on Belle Isle in Detroit. He cycled through campaign staff and missed a debate this month in Livingston County after organizers say he promised to attend.

"We're seeing what happens when you gain that frontrunner status but you aren't necessarily in a position to have actually earned it," Bitely said.

Tudor Dixon, the Norton Shores businesswoman and conservative media personality, appears to be the new candidate to beat after making the ballot and securing an endorsement from the powerful and wealthy DeVos family of west Michigan on Monday, Bitely said.

Dixon has failed to crack double digits in public opinion polls of the GOP field. But in a single day, she went from "being an afterthought to being more of a frontrunner," Bitely said.

Garrett Soldano, who has placed second in several public opinion surveys, also has to be considered a "first-tier candidate” now, she added. Rinke, meanwhile, has pledged to spend up to $10 million of his own money on his campaign. 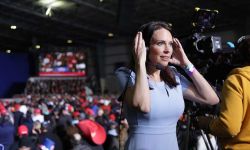