May 25: Michigan board to decide if Craig, Johnson, others make ballot: What to expect
May 24: GOP vows fight to keep candidates on Michigan ballot. ‘This is far from over’
May 23: James Craig, Perry Johnson, three others shouldn’t make GOP ballot, state says
May 11: James Craig seeks to stay in Michigan governor race, says campaign ‘defrauded’

LANSING — A petition fraud scandal threatening the candidacy of Republican gubernatorial front-runner James Craig has spread to at least three other Michigan candidates accused of submitting forged signatures from the same circulators in their quest to make the primary ballot.

Michigan gubernatorial, congressional and judicial candidates are required to submit voter signatures to qualify for the ballot, but experts say unusually high demand for paid circulators this spring led to a price spike that may have incentivized cheating or sloppy collections.

Now, political foes are challenging petitions and other campaign paperwork filed by 29 Michigan candidates, who can rebut those claims by Friday. State canvassers will decide who makes the ballot within the month.

A review by Bridge Michigan shows five of the challenges involve specific accusations of forged signatures on nominating petitions. Four of those — including petitions submitted by Craig and fellow GOP gubernatorial hopeful Perry Johnson — identify alleged forgeries by a group of circulators who collected for multiple candidates.

Challengers claim the ring used a "round-robin" technique to fill out each other’s petitions by forging names from a list of legitimate voters. Tell-tale signs made fakes easy to spot: Similar handwriting, repeated spelling errors and consistent patterns across multiple petition sheets, according to the challenges. 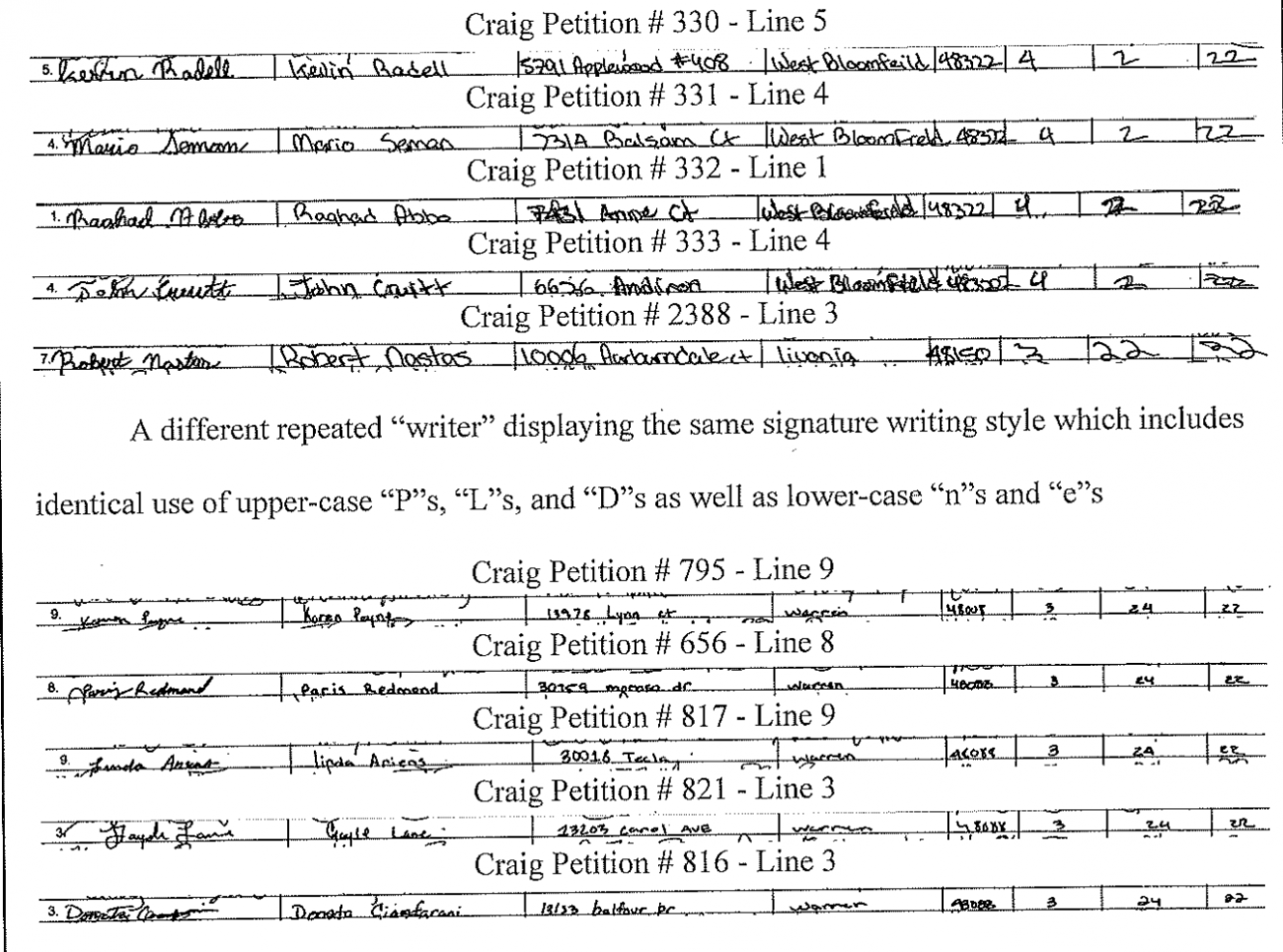 Democrats challenging former Detroit Police Chief James Craig’s signatures to qualify for the ballot say many appeared to be in the same handwriting, such as these. (Courtesy photo)

The independent but nearly identical accusations against circulators for judicial candidates in Oakland and Wayne counties "corroborate our allegations," said Mark Brewer, a Democratic attorney who challenged Craig's nominating petitions.

“The proof just keeps piling up of a massive forgery scheme,” added Brewer, a former chair of the state Democratic Party.

Democrats also seek to disqualify a third Republican candidate for governor — Tudor Dixon — because of a technical claim she has called “bogus”: Every one of her nominating petitions told voters she is running for a term that ends in 2026. The gubernatorial term will actually end Jan. 1, 2027.

Michigan candidates facing a ballot access challenge, either because of allegedly invalid signatures, affidavits of identity or other issues:

There is precedent for similar challenges succeeding, and the stakes are high heading into fall elections in which Republicans will try to topple Gov. Gretchen Whitmer and other incumbent Democrats.

Should all three gubernatorial challengers be disqualified, national donors “will see Michigan's GOP primary as a complete and total disaster, sending their dollars to other states until, and if, a strong Republican candidate emerges from the ashes later in the year,” said John Sellek, founder of Harbor Strategic Public Affairs in Lansing.

“And, despite her pollster saying 2022 is the worst Democrat political environment in 30 years, Team Whitmer will allow themselves again to dream about national office,” added Sellek, referencing past reports that President Joe Biden considered her as a running mate in 2020.

Experts say a huge field of 10 GOP gubernatorial candidates, other ballot proposal petition drives and poor weather drove demand for a limited number of circulators who were able to command sky-high pay.

As Bridge Michigan reported last month, some firms were offering $20 per signature, four times what they paid four years prior. Gubernatorial candidates alone were required to collect at least 15,000 signatures.

At those rates, circulators could earn good money collecting legitimate signatures, but it was “a whole lot easier to cheat than it was to actually stand in front of the Kroger in the drizzle and try to get people to stop and talk to you,” said Mark Grebner of Practical Political Consulting, a Democrat who discovered alleged forgeries on petitions filed by two non-partisan judicial candidates in Wayne County.

“People are generating exactly what the market demands, except the market would kind of like it if the signatures didn't all have the same handwriting and maybe the city names were spelled correctly.”

The challenges are merely accusations, and candidates can submit formal rebuttals to the state by Friday. Staff at the Michigan Bureau of Elections will review all petitions, including any that are challenged, before determining how many valid signatures they think each candidate filed.

Grebner said that candidates likely “got bilked,” but should have reviewed the petitions and spotted the alleged forgeries before filing them.

Craig, the former Detroit police chief, is facing two separate but similar challenges: One from a super PAC supporting Dixon that alleged numerous issues including “apparent fraud” on his petitions, and another more extensive complaint from the Michigan Democratic Party.

The Craig campaign has dismissed the challenges as a “last-ditch effort” by opponents to keep him off the ballot, expressing “total confidence” in the 21,000 signatures he submitted, which exceed the 15,000 required. A spokesperson did not respond to follow-up questions from Bridge this week.

But the Democratic challenge alleges, in unusual detail, a “round-robin” operation that at least eight individual circulators used to quickly sign forged signatures on each other’s petitions. And independent challenges to other candidates’ petitions allege a similar scheme.

Those eight circulators collected a combined 6,933 signatures for Craig, which, if tossed out by the Board of State canvassers, would keep him off the ballot. Challengers allege other signatures he submitted are also suspicious and could be invalidated.

The circulators themselves, if prosecuted by the state, could face up to five years in prison and a fine of up to $1,000 for each petition they filed.

“I have never seen such evidence of forgery and fraud and a petition drive in the nearly 40 years I've been practicing electoral law in Michigan,” Brewer told reporters last week.

In a separate challenge, Democrats alleged that six of the “James gang” circulators identified by Brewer also collected signatures for Johnson, the wealthy metro Detroit “quality guru” who has put millions of his own money into the gubernatorial race but was the last candidate to file petitions.

Grebner, an East Lansing political consultant who specializes in petition reviews, independently accused seven of the same eight circulators of forging signatures on nominating petitions for John Malone, a judicial candidate running for the Third Circuit Court in Wayne County.

The alleged scheme, he explained, involves a small number of people alternately writing names and addresses on petitions, with each forger adding a name in turn from a list of genuine voters.

“As a result, round-robin petitions often contain periodic patterns, where for example, every sixth name might be drawn from a particular election precinct, or might show similar handwriting,” Grebner wrote.

Malone, who declined comment, may have “unwittingly submitted inauthentic ‘signatures’ concocted” by the circulators “without appreciating the true scope of their deceit,” an attorney, Peter Ruddell, wrote in the challenge,  “but that does not excuse his failure to demonstrate that he possesses a modicum of support from actual voters.”

Ruddell and Grebner teamed up on another challenge in the same race, alleging two other circulators forged more than 20 percent of the signatures filed by Third Circuit Court judicial candidate Philip Cavanagh of Detroit.

“We did not have a word for” the alleged round-robining until we read the Craig complaint filed last week, said Kay Shelton, whose wife Amanda Shelton is running against Dare for the Oakland County judicial post.

“It did not take us very long (to identify the alleged forgeries), and we’ve never done anything like this before,” Shelton told Bridge Michigan. “I believe, seeing all this now, that this is pretty widespread.”

The Michigan candidates who the accused circulators collected signatures for have not yet been required to file campaign finance disclosure reports that could indicate which petition firms they hired.

None of the campaigns responded to questions from Bridge Michigan about how the circulators ended up collecting for them.

"Unfortunately, the nature of campaign-finance reporting in this state doesn't require that to be revealed," said Brewer, the Democratic attorney.

Speaking to Bridge last week, Grebner said the circulators likely worked for multiple petition firms, comparing them to ride-share drivers who work for both Uber and Lyft to maximize profits.

And in the final weeks before the state’s April 19 petition deadline, as candidates scrambled to collect signatures, every firm seemed to be hiring.

Of the challenges filed against 29 Michigan gubernatorial, congressional and judicial candidates, 18 include requests to invalidate signatures. Others allege false claims on affidavits of identity or errors on petition headers, including seemingly mundane discrepancies highlighted as “fatal flaws.”

Attorneys for Democratic U.S. Rep. Elissa Slotkin, for instance, argue Republican challenger Tom Barrett should not make the ballot because his petitions reference both Charlotte (his mailing address), Carmel Township (where he technically lives) and a ZIP Code, which was not required.

Similarly, petitions from Amanda Shelton, the Oakland County judicial candidate, should be “disallowed” because she wrote "Beverly Hills" in a header field reserved for a city or township even though Beverly Hills is technically a village, according to a separate challenge.

The bipartisan Board of State Canvassers is scheduled to meet on May 26 for votes on whether to certify nominating petitions.

Candidates kept off the ballot could file emergency court appeals, but the state is required to finalize the ballot by June 3, 60 days ahead of the August primary.

Bureau of Elections staff will prepare recommendations for canvassers, and they’re going to have a busy month, according to Director Jonathan Brater.

He told canvassers on Monday that his team will review every petition filed by gubernatorial, congressional and judicial candidates - whether they are challenged or not.

The state will look for “things that would make every signature on the sheet invalid,” including “errors in the heading,” Brater said. They’ll look at every line to eliminate duplicate, forged or otherwise invalid signatures, and could also refer circulators for criminal investigation, he added.

Candidates will have another opportunity to argue their case for ballot access later this month before canvassers in what is expected to be a marathon session. On Monday, canvassers asked state staff to provide them with lunch – and maybe dinner — at their May 26 meeting.

“If the staff does a good job, the meeting won’t be as long because some of these candidates who are supposed to be on the ballot are going to realize they’re done,” said Norm Shinkle, a GOP canvasser who is also running for state House.

But the challenged candidates “sound very confident” they will still make the ballot, Shinkle added. “There’s two trains colliding on the tracks here, so we’ll see what happens.”

Shinkle and fellow GOP canvasser Tony Daunt could be put in an awkward position given the challenges filed against Craig, Johnson and Dixon. Each are top-tier candidates in the crowded GOP gubernatorial primary, and their exclusion would upend that contest.

Daunt told Bridge Michigan he plans to follow the law.

Both Daunt and Shinkle said they are concerned about the alleged signature forgeries and, if the allegations prove true, said circulators should be prosecuted. Each petition they filed — and signed — included a warning that signature fraud is a violation of Michigan election law.

“I just hope they go to prison so they learn a lesson,” Shinkle said of the accused circulators.

“Cheating on a high school test or college test is one thing, but when you’re doing this in state government, that’s serious stuff, and we can’t accept it.” 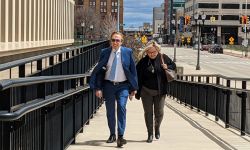