The first-term Democrat said she did not personally learn about the contract until after it was signed on April 20, despite an email that showed her communications director discussing the “arrangement” days before the $194,250 deal was finalized.

“When I found out about the contract, I told them to cancel it,” Whitmer told reporters Thursday during a briefing on the state’s response to the coronavirus pandemic.

Communications Director Zack Pohl is “not a person that signs off on state contracts,” she said. “So any interpretation that implies that that was a part of his role was absolutely incorrect.”

Her denial follows a Bridge Magazine story Tuesday about emails obtained through a public records request that appear to show Michigan officials tried to avoid controversy over the contact tracing contract by shifting planned work to apolitical subsidiaries of firms with known partisan leanings.

The contract nonetheless sparked accusations of political patronage and questions over whether data collected from COVID-19 patients could be used for political purposes. Whitmer cancelled the contract a day after it was signed, delaying the project by weeks as the state scrambled to find a new vendor.

Andrea Taverna, a senior adviser in the Michigan Department of Health and Human Services, told colleagues in an April 17 email that “we got the green light from EOG [the executive office of the governor] to move forward with a slightly different organizational arrangement of the contact tracing volunteer work.”

“This would still be working with Mike Kolehouse,” she said, referencing a longtime political consultant from west Michigan, “so work there isn’t lost — it’s just organized somewhat differently.”

Three days later, the state signed a contract with Great Lakes Community Engagement, a firm run by Kolehouse that Taverna said serves nonprofit and corporate clients, rather than Kolehouse Strategies, which had been working with the state “pro bono” since April 1.

The Whitmer administration said Tuesday that Taverna’s email followed a phone conversation and email exchange about “optics” with Pohl, the governor’s communications director.

Those emails were not included in the documents originally provided to Bridge Magazine on Tuesday.

The exchange “simply got missed when the [Freedom of Information Act] office uploaded the files” to a web portal on Tuesday morning, Lynn Sutfin, a state health department spokesperson, told Bridge on Wednesday.

“It was realized by the staff member a couple hours after they initially uploaded them and the folder was reuploaded,” Sutfin said. 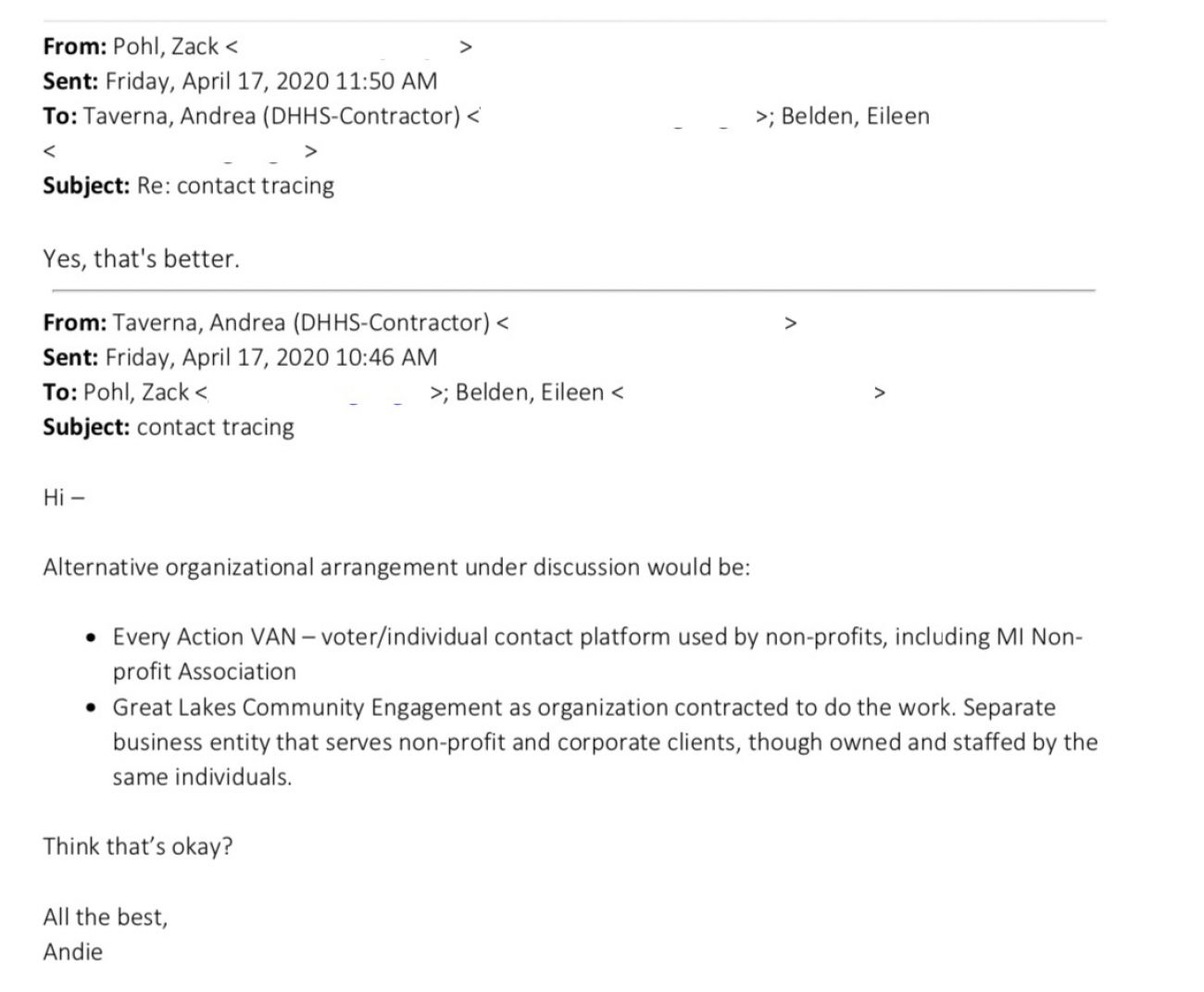 The exchange in question, finally obtained by Bridge on Wednesday, shows Taverna emailing Pohl and fellow Whitmer communications staffer Eileen Belden with an outline of what she called an “alternative organizational arrangement” for the contract tracing program.

Great Lakes Community Engagement would be hired to do the work, Taverna said. And that firm would use EveryAction VAN, a “voter/individual contact platform used by nonprofits” to call anyone who came into contact with COVID-19 patients, she said. Training documents suggest the state had considered using software from NGP VAN, a leading provider of Democratic campaign tools owned by the same company as Every Action.

In a previous phone call with Taverna, Pohl had “raised concerns that using a political vendor would be a distraction from the important work that needed to be done,” according to Whitmer spokesperson Tiffany Brown.

That’s not clear from the email he sent Taverna.

Communications within the governor’s office are not subject to public records requests under the Freedom of Information Act in Michigan, and Whitmer said Monday she does not know if anyone else in her office knew about the contact tracing conversation beyond Pohl and Belden, her communications staffers.

“I can tell you that I did not know that this contract had been entered into by the department,” Whitmer said, “and as soon as it became known to me, I told them to cancel it, and they did.”

Taverna’s email, as first reported Tuesday by Bridge, prompted a new round of partisan outcry over the contract process.

Michael Joyce, a spokesperson for the Republican National Committee called Whitmer’s previous claim she had no prior knowledge of the contract “a contender for lie of the year.”

“We still have questions about how much data the vendor handled while under contract, what happened to that data, and any other contracts that are in place for political vendors,” Hernandez said Wednesday. “I am hopeful that now our remaining questions on contact tracing can be answered and the governor will let the people of Michigan know why statements made in the past on this topic were not clear and factual.”

Taverna, in an April 16 email to colleagues, noted that Kolehouse had also signed a separate data use and non-disclosure agreement that required his firm to “destroy” any data after completing work for the state.

“The reason we’re using this system is that it allows for remote phone banking & data collection — exactly the process we need for contact tracing,” Taverna said, referencing the EveryAction Van software that Kolehouse was going to use.

“But there’s a big firewall between this & firm’s other work.”

Under emergency rules, the state is not required to solicit bids from multiple vendors. But Whitmer has said the contract should have been reviewed by the State Emergency Operations Center, which is overseeing state contracts during the pandemic.

An April 18 email obtained by Bridge shows at least one person in the Emergency Operations Center — spokesperson Dale George — was aware of the matter before the contract was signed and approved a media statement from the health department stating that NGP VAN was “no longer under consideration” and that a final vendor decision was expected the following week.

George said Wednesday he had simply been doing his job as a communications specialist and that his comments did not reflect any contract review process.

“The Joint Information Center is made up (of) state agency (public information officers) working together to create a one stop shop for the public and reporters to get information and answers to questions,” he said. “It is not involved in the approval of contracts.”

Michigan defies expectations, bringing in $1.7B more revenue than expected