LANSING — Michigan Gov. Gretchen Whitmer’s office gave the “green light” for a COVID-19 contact tracing “arrangement” she denied knowledge of and canceled amid outcry over a contractor with Democratic ties, according to emails obtained by Bridge Magazine.

Andrea Taverna, a senior adviser in the Michigan Department of the Health and Human Services, told colleagues in an April 17 email that Whitmer’s office was on board with using a firm run by Mike Kolehouse, a longtime Democratic campaign consultant from west Michigan.

“We got the green light from EOG [the executive office of the governor] to move forward with a slightly different organizational arrangement of the contact tracing volunteer work,” Taverna told other health department officials.

“This would still be working with Mike Kolehouse, so work there isn’t lost — it’s just organized somewhat differently.” 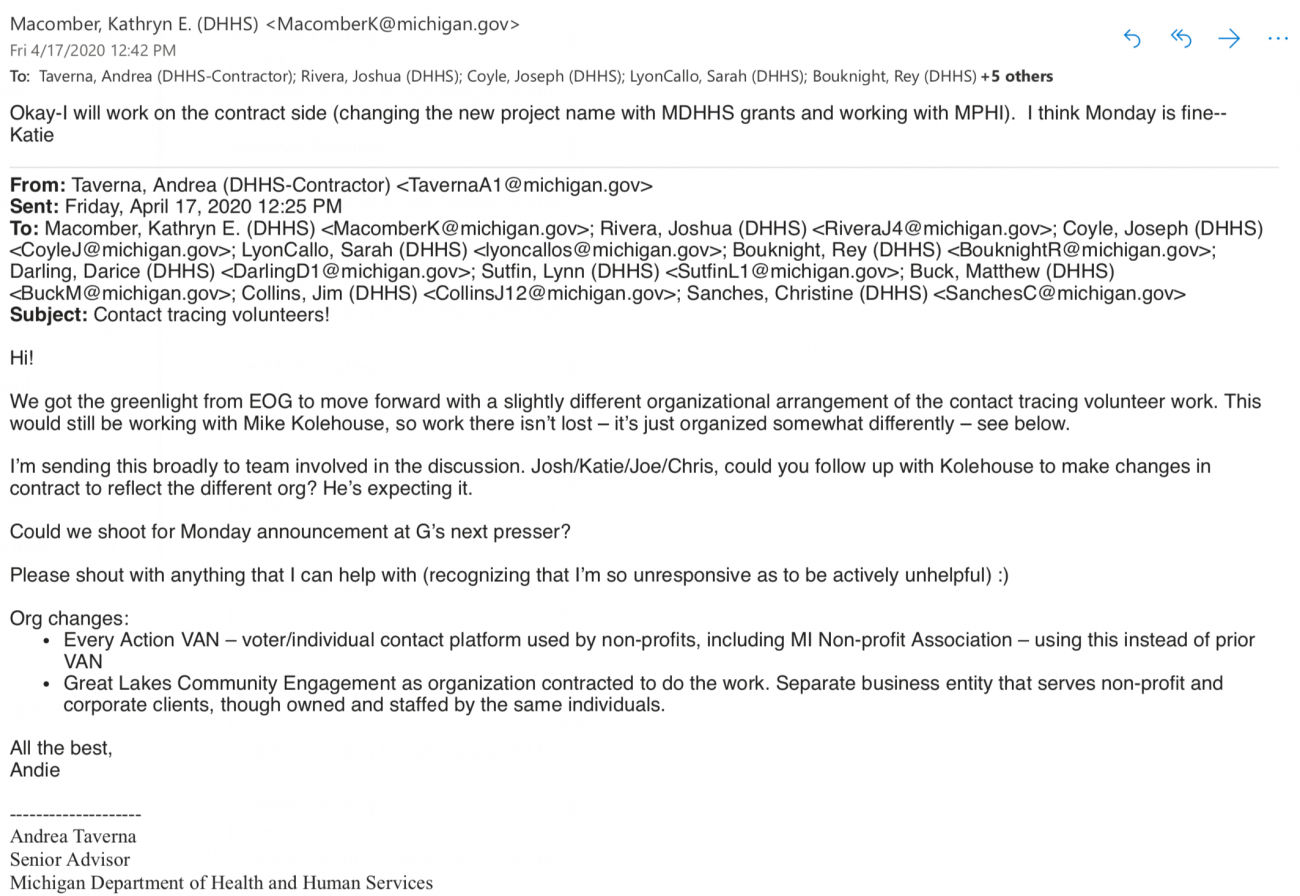 Health officials say contact tracing is necessary as Michigan tries to control the coronavirus pandemic, which has killed more than 5,200 state residents since March. Used to identify and track those with the disease, the tracing is an important step to inform decisions on when to lift social distancing restrictions.

But the Whitmer administration’s initial contract ignited a partisan controversy that led to the cancellation of the Kolehouse contract and delay in selecting a new vendor.

Taverna’s email explained the state would sign a $194,250 contract with Kolehouse’s Great Lakes Community Engagement firm instead of Kolehouse Strategies, which had been doing planning work “pro bono” since early April and previously submitted its own statement of proposed work.

In the April 17 email, Taverna did not explain the motivation for using the alternative firm but noted that Great Lakes Community Engagement is a “separate business entity that serves nonprofit and corporate clients, though owned and staffed by the same individuals” as Kolehouse Strategies.

She also told colleagues that contact tracing volunteers would use call center software from EveryAction VAN instead of NGP Van, which is a well-known technology provider for Democratic campaigns across the country. EveryAction is a subsidiary more often used by nonprofits, including the Michigan Nonprofit Association, Taverna said.

Asked about the email Tuesday, Whitmer’s office reiterated that Kolehouse’s firm was “identified and ultimately approved” by officials within the health department and the Michigan Public Health Institute, which formally hired Kolehouse as a subcontractor – not the executive office.

Whitmer communications director Zack Pohl “had responded to a question in an email about the optics of using a vendor that does work primarily for nonprofits,” said the governor’s spokesperson Tiffany Brown.

“He was not approving a contract. Based on a previous phone conversation, the governor’s communications director had raised concerns that using a political vendor would be a distraction from the important work that needed to be done.”

Less than an hour after Taverna’s April 17 email, Katie Macomber, director of the department’s HIV and STD prevention programs, asked the Michigan Public Health Institute to change its pending contract with Kolehouse to instead name Great Lakes Community Engagement.

State records show Kolehouse, who declined to comment Tuesday, has used both Great Lakes Community Engagement and Kolehouse Strategies as “assumed names” for his K2K Consulting firm based in Grand Rapids.

The contract finalized April 20 prompted criticism from Republicans, including state GOP chair Laura Cox, who accused Whitmer of using taxpayer dollars to enrich “Democratic associates” while handing them “the keys to our highly sensitive data.”

Whitmer canceled the contract a day after it was signed, saying it should have been vetted by the State Emergency Operations Center that oversees contracts signed amid the coronavirus pandemic.

Under emergency rules, the state is not required to solicit bids from multiple vendors.

“When it was brought to my attention, I told them to cancel it,” Whitmer said in an April 22 press briefing, calling the contract an “unnecessary distraction” she wanted to move past in order to launch the “incredibly important” contact tracing program.

The controversy delayed the volunteer program by weeks. Michigan announced May 9 that it had signed a contract of more than $1 million with Rock Connections, a call center company that is part of Detroit billionaire Dan Gilbert’s business group.

The governor said she did not know why the health department initially contracted with Great Lakes Community Engagement, “but I do know the Department of Health and Human Services does not have a political bone in their theoretical body,” she said in late April.

Taverna, who had previously worked directly for Whitmer as her deputy cabinet director, told colleagues the governor’s office was OK with the contact tracing arrangement on April 17, one day after Bridge Magazine and The News first started asking about vendors.

Emails show multiple media outlets, including The Washington Post, later asked the health department and Whitmer administration about the contract.

Nakagiri raised questions about whether data collected from COVID-19 patients or contacts could be used for political purposes. And he noted that Nationbuilder, a separate software firm often used by political campaigns, was offering free accounts to help entities respond to the global pandemic.

Taverna, in an April 16 email to colleagues, noted that Kolehouse had also signed a separate data use and non-disclosure agreement that required his firm to “destroy” any data after completing work for the state.

“The reason we’re using this system is that it allows for remote phone banking & data collection — exactly the process we need for contact tracing,” Taverna said, referencing the EveryAction Van software that Kolehouse was going to use.

“But there’s a big firewall between this & firm’s other work.”

In an April 18 exchange over media inquiries, department spokesperson Lynn Sutfin told a colleague that “NGP Van and open VPB are a package deal used by Democratic Party during elections. We are not using them.”

But at least one health department official appeared to question the distinction between Kolehouse Strategies and Great Lakes Community Engagement.

“Same organization but a different name?” Farah Hanley, senior deputy of financial operations for the Michigan Department of Health and Human Services wrote in an April 17 email to Christine Sanches, a senior management executive in the bureau of grants and purchasing.

Other emails call into question the governor’s claim the contract did not go through the state Emergency Operations Center and indicate her office signed off on messaging before she canceled the contract.

In an April 18 email, a spokesperson for the Emergency Operations Center approved a media statement Sutfin had proposed saying that NGP VAN was “no longer under consideration” for the contact tracing contract and that a final vendor decision was expected the following week.

“Looks good, Lynn,” Dale George wrote in the email, which he also sent to the governor’s communications team two days before the contract was signed and three days before Whitmer cancelled it. “Fine with SEOC/JIC.”

On April 20, the day the state formally announced the contract with Great Lakes Community Engagement, Whitmer communications director Pohl approved another round of media statements prepared by Sutfin.

“I would hit the fact that it’s used by (the Michigan Nonprofit Association) again,” Pohl recommended.

The next afternoon, Whitmer chief legal counsel Mark Totten asked Taverna to provide a copy of the contract between DHHS and EveryAction. The state never contracted with EveryAction, however. Documents show Kolehouse’s firm was planning to contract with EveryAction.

Less than an hour after Totten’s request, Taverna emailed colleagues and told them the governor’s office had reviewed the contract with Great Lakes Community Engagement and asked that the health department “terminate it.”

“The State Emergency Operations Center at MSP is coordinating emergency response effort and the practice is to send contracts that are part of the emergency response through SEOC, which ensures that all relevant parties have opportunity to review,” Taverna wrote.

“That step did not happen here,” she said April 21, hours before Whitmer’s office publicly announced the state was canceling the contract.

Taverna continued: “In addition, this firm raises questions about partisan affiliation. It is extremely important that the public have full confidence in the state’s emergency response and we not give any reason for doubt.”

Emails obtained by Bridge do not shed much light on how the health department selected Kolehouse.

Officials only explained the decision after the fact, on April 21, when Deputy Director Elizabeth Hertel asked for background on the contract. Macomber told Hertel that she and Coyle learned of the company through Taverna, who she suggested may have heard about Kolehouse’s firm from Detroit Mayor Mike Duggan.

Duggan spokesperson John Roach disputed that suggestion Tuesday, telling Bridge the mayor does not know Macomber or Taverna and had “no interaction or conversation with anyone at the State of Michigan” about the firm.

“We can only assume this email reflects a misunderstanding on the part of the email’s author,” Roach said.

Lyon-Callo, the state epidemiologist, confirmed she was part of the decision-making process in an April 21 email to colleagues, noting she signed the data use non-disclosure agreement with Kolehouse.

“The point of this is to ensure close contacts of COVID-19 cases are reached out to, educated about their exposure, and told to self quarantine to prevent further exposures,” Lyon-Callo said, explaining the volunteer contract tracing program was already behind schedule.

“Our goal was to have a training academy [done] for public health oriented volunteers [done] so that we could have contract tracing underway well before the end of the month [ideally last Friday.]”

Hertel and Hanley, the department’s senior deputy of financial operations, had questioned the pending contract a week earlier.

“$21,000 a week and a pre pay for a firm to do where we should be using employees sitting at home,” Hanley said in an April 15 email to Hertel.

“Why are we spending money on this instead of trying to work with google or Microsoft on tracing through smartphones,” Hertel responded. “This seems a bit antiquated.”

After canceling the contract with Kolehouse, the state did not make any payments to Great Lakes Community Engagement, Sutfin said Tuesday.