LANSING — For the Michigan Republican Party, life after President Donald Trump may look a lot like life under Trump, according to activists and experts who expect him to remain a power broker in politics for years to come.

While Michigan GOP Chair Laura Cox, a Trump loyalist, announced this week she is not seeking re-election, her presumed successor Ron Weiser has placated the Trump base by teaming with conservative activist Meshawn Maddock, who is poised to become party co-chair next month barring any last-minute changes.

Maddock is a vocal figure in the "stop the steal" movement alleging Trump won the election and organized buses to Washington, D.C. this week for a massive rally where some Trump supporters stormed the U.S. Capitol in a violent siege.

"There's no question that until Trump makes an announcement about [whether he'll run again in 2024,] he is the titular head of the Republican Party, both in Michigan and nationally," said Michigan strategist Dennis Lennox, who has called for Maddock to withdraw as the presumed state co-chair because of her organizing efforts for the U.S. Capitol protest.

Weiser is standing by Maddock, a national advisory board member for the Women for Trump group who spoke at a Tuesday rally in Washington, D.C. with her husband state Rep. Matt Maddock, R-Milford.

That was a day before the riots, and Weiser said Maddock was “in a hotel room watching it from a window” when the chaos ensued.

"I don't know," said Weiser, a real estate magnate and former U.S. ambassador to Slovakia who now serves as a University of Michigan regent.

“I didn't read any of that stuff, and I didn't watch television. I watched Michigan destroy Minnesota in basketball, and that kind of contest is something that I strongly support."

The game started about 8:30 p.m. Wednesday, more than five hours after the House and Senate chambers were evacuated amid reported of gunfire inside the Capitol, where police say one woman was fatally shot and three others died from other causes. 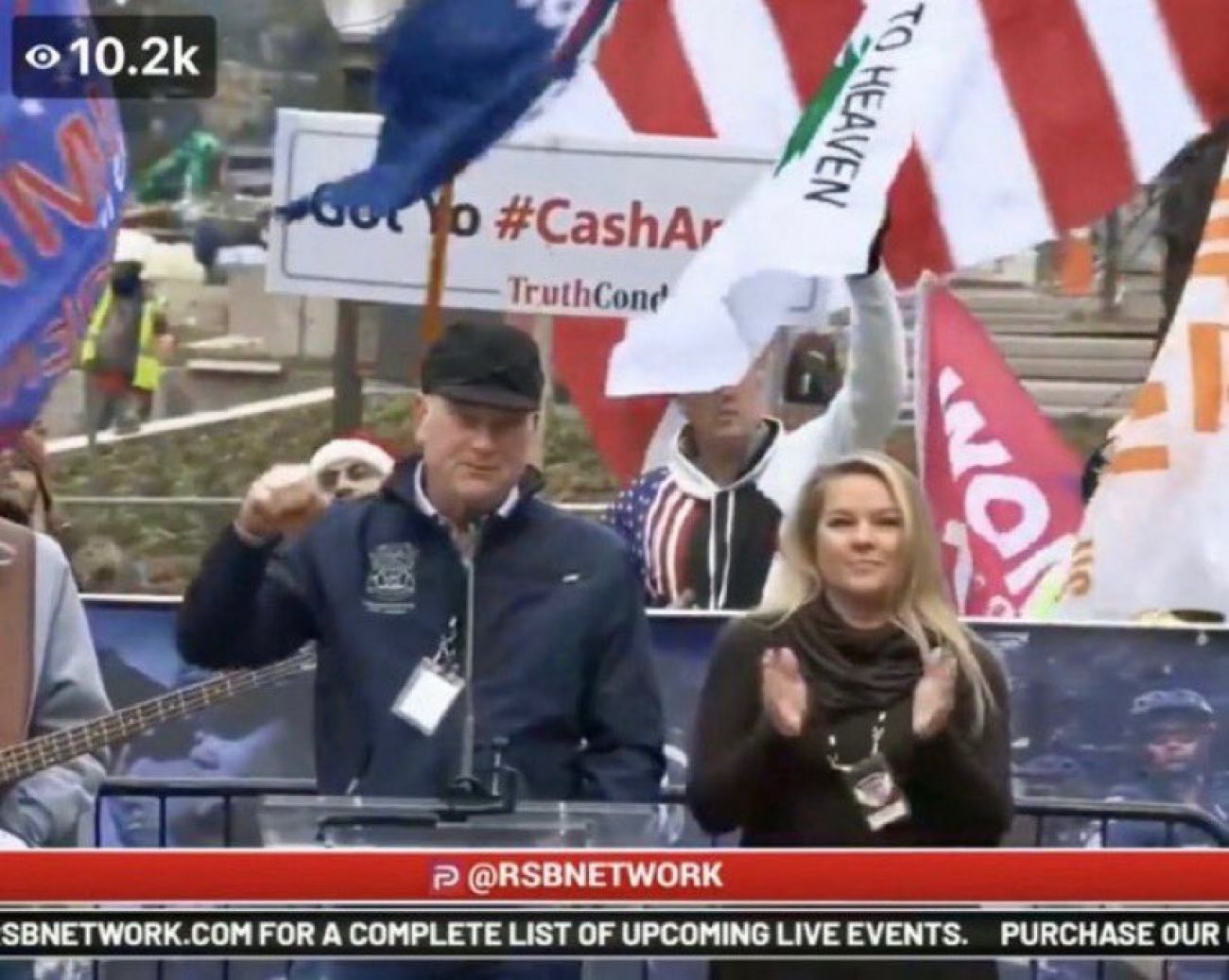 Trump will have a lasting imprint on the party, for better or worse, according to party insiders, some of whom fear the Trump brand is growing toxic because of his refusal to accept his election loss to Democrat Joe Biden, fomenting outrage that culminated in his supporters storming the U.S. Capitol on Wednesday.

While Michigan Republicans retained control of the state Legislature and congressional seats in the 2020 election, the party's electoral record under Trump has been far from successful: Democrats now control all top statewide offices and flipped the Michigan Supreme Court.

Nationally, Republicans lost control of the U.S. House in 2018, lost the White House in 2020 and this week lost their majority in the Senate after Democrats knocked off two Trump-backed incumbents in Georgia's runoff elections.

While the 2022 midterm would typically benefit the party out of power, Michigan GOP insiders have yet to coalesce around a candidate to take on Democratic Gov. Gretchen Whitmer, and top-tier recruits have opted out, including former U.S. Rep. Candice Miller, who is now Macomb County’s public works commissioner.

"Trump is the 800-pound gorilla in the room," said John Sellek, a Republican consultant with Harbor Strategic who worked on GOP nominee Bill Schuette's 2018 gubernatorial campaign.

The president's attempts to undermine an election he lost appeared to be "aimed at avoiding admitting he lost and leaving him in a position to still control the party based on the grievance that it was taken from him," Sellek said. "Regardless of if he runs again [in 2024,] so much of that rhetoric appeared to be to position him to still be the de facto in charge of the party."

If there was any momentum for the GOP in Michigan's largest city, however, the president may have squandered it with his efforts to invalidate Detroit ballots amid unsubstantiated fraud claims and corruption, said Republican activist Wayne Bradley.

"The worst thing is that it feels like some people feel like their votes are being disenfranchised," said Bradley, former ethnic vice chair of the Michigan Republican Party, who has spent years recruiting Black voters.

Weiser, a GOP donor who amassed a fortune in the real estate industry, is an establishment figure poised to take over the state party for a third time.

He made no public comment this week as Trump supporters stormed Congress but told Bridge Michigan he condemns the violence.

“I support peaceful protests … and I condemn anybody who condones violence,” Weiser said.

In a brief phone interview just one day after Cox dropped out of the race, making him and Maddock the presumptive party leaders, Weiser declined to discuss his plans to reshape the Michigan GOP, noting that when “Biden won the election, he took weeks to name his cabinet and figure out what his policies were.”

In a Thursday morning statement, Trump committed to a peaceful transition of power, “and therefore the 2020 elections are over,” Weiser said in a follow-up text message to Bridge. “It is time for Republicans to rest, regroup, and focus on defeating the Democrats in 2022."

Facing a potential fight with Cox, Weiser had appealed directly to Trump supporters by teaming with Maddock, who rose from the tea party ranks to become a major force in Michigan politics and last spring organized a massive state Capitol rally against Whitmer’s coronavirus lockdown.

She spoke at a Trump rally on Tuesday and posted video footage of an activist gathering on Wednesday morning in which a man was heard saying “we need to march to the Capitol when we’re done here and drag these people out of power.”

Maddock did not respond to a voicemail seeking comment on this story, but she condemned the violent riots in a Thursday tweet, saying the protest was “supposed to be a peaceful event.”

Maddock has established herself as an unapologetic firebrand who has described political compromise as weakness.

“I feel like it’s time for conservatives to start using the same tactics that the left has used for a long time, and I don’t want to be passive about it anymore,” Maddock, who is a leader of the Michigan Conservative Coalition, told Bridge last year.

“I’m really not interested in bipartisan or reaching-across-the-aisle politics. The world is divided right now, and I’m OK with it, because the truth is, I feel like I’m on the right side.”

Former Republican National Committee member Dave Agema of Grandville, for instance, has accused Weiser of offering Maddock cash to join him in the party takeover.

He called Weiser a “member of the deep swamp" who has "eliminated true conservatives for those that take his orders."

Other GOP activists, like Wes Nakagiri of Hartland Township, see Weiser and Maddock as a "great combination" that could coalesce various party factions.

"We need grassroots activists, we need organization, and Meshawn has proved to me that she can mobilize people and she can bring enthusiasm," said Nakagiri, a onetime tea party leader who now chairs the Livingston County Board of Commissioners.

"But we also need funding, and Ron Weiser brings that experience and that success."

Weiser is well-known and respected in Republican circles, but his decision to team with Maddock shows "poor judgement," said Greg McNeilly, a GOP strategist with ties to the powerful DeVos family of West Michigan.

"Meshawn has a history and legacy of irresponsible speech that immediately makes her not a credible candidate for future chairmanship or leadership in the party," McNeilly said.

"So aligning yourself with people like that I think is a mistake."

No room for never Trumpers

Maddock is among many once-fringe activists who have worked their way into the upper echelons of the Michigan Republican Party under Trump. She now serves as chair of the chair of the 11th Congressional District Republican Party that represents parts of western Oakland and Wayne counties.

In the neighboring 13th District, GOP Chair Dave Dudenhoefer has spent weeks echoing the president's false claims of a "rigged election by spineless members of the political elite."

"The revolt is just getting started,” he said.

In what was widely seen as a sign of the Michigan GOP’s fealty to Trump, Cox last year lambasted former Gov. Rick Snyder, a Republican who has called the president the “divider-in-chief” and endorsed Biden.

Cox, the outgoing chair, lashed out at Snyder for the endorsement, going so far as to call the party's most recent governor "Mr. Irrelevant” as Trump excoriated the former governor on Twitter, blaming him for the Flint water contamination crisis.

"It wasn't surprising," Snyder told Bridge in November as Trump was pressuring officials to overturn his election loss.

"In many cases it's the party of Trump today. And so I would expect them to be espousing a Trump-oriented attitude towards anyone who opposes them. I'm still a proud Republican. And I think we need more proud Republicans to stand up and say, it's not the party of Trump. Long term, historically, and we need to get back to it representing the values that it was created for."

He said he hopes that "sanity" will eventually prevail and is looking toward 2022 primaries to see whether GOP candidates can win by running on the Trump brand.

“Nothing will change in the next four years,” Timmer said."Trump will run a shadow presidency, because he has control of the megaphone and the Republican apparatus. He's not going to give that up. And so the only thing that's going to change after Jan. 20 is where he watches TV and where he tweets from."

Trump has already put his hands on the levers of the party, endorsing Michigander Ronna McDaniel to continue running the Republican National Committee, a post the incumbent would typically vacate after a presidential election loss.

Locally, some Michigan Republicans are urging McDaniel to run for governor instead and challenge Whitmer in 2022.

"The RNC controls a lot of what state parties do,” Timmer said, “and so if Ronna is re-elected it would signal an iron-hand control by Trump of the RNC, and therefore continued ironclad control of the Michigan GOP.”