LANSING — Gov. Gretchen Whitmer won’t have to testify next week when her attorneys argue for a continued injunction against enforcement of Michigan’s 1931 abortion ban, an Oakland County judge ruled Wednesday.

David Kallman, an attorney for two Republican county prosecutors who want to enforce the law, had subpoenaed Whitmer, arguing the first-term Democrat should have to testify since she is lead plaintiff in a suit challenging the ban.

The long-dormant law would make it a felony for physicians or nurses to perform an abortion unless the life of the mother was in jeopardy.

Whitmer’s testimony would "only serve to detract from the governor's performance of her official duties, needlessly complicate the proceedings before this court, and improperly raise the level of spectacle surrounding the case,” deputy attorney general Christina Grossi argued in a motion to quash the subpoena.

Whitmer is not personally a party to the case and is a plaintiff only in her “official capacity” as governor of the state, Grossi told the court.

Oakland County Circuit Judge Jacob Cunningham agreed with Whitmer’s attorneys. There is “good cause” to quash the subpoena, the judge wrote in a one-page order, excusing the governor from testifying at an Aug. 17 hearing.

It’s the latest wrinkle in an ongoing challenge to Michigan’s 1931 abortion ban, which would have otherwise been reactivated in June when the U.S. Supreme ended federal protection for legal abortion by overturning Roe v. Wade.

Whitmer is asking the Michigan Supreme Court to declare that the law violates the state constitution. But her legal challenge began in Oakland County, where Cunningham last week issued a temporary injunction after the Michigan Court of Appeals ruled a state injunction did not apply to county prosecutors.

Violations of the law would be punishable by up to four years in prison and/or a fine of up to $5,000. Physicians could also face administrative penalties, including revocation of medical licenses. Clinics could face possible penalties too.

Right to Life of Michigan and the Michigan Catholic Conference are among the groups attempting to intervene in the Oakland County case in order to defend the 1931 law in court.

Those groups have a vested interest because Whitmer's asserted constitutional right to abortion would "impact all pro-life laws," including parental rights and informed consent statutes they advocated for in the Legislature, attorney John Bursch argued Wednesday in a court filing.

"It is difficult to envision interests that would assure more sincere and vigorous advocacy," wrote Bursch, a former state solicitor general representing Right to Life and the Catholic Conference on behalf of the Alliance Defending Freedom.

Whitmer wants Cunningham to extend his prosecutorial injunction while she awaits word from the Michigan Supreme Court, which has not yet responded to her April request to rule on the constitutionality of the 1931 law.

"The statute denies Michiganders their fundamental constitutional rights to make the intimate, personal, and profound decision whether to bear a child," Grossi argued on Whitmer’s behalf in a Wednesday filing.

“It does so with the unconstitutionally discriminatory purpose of forcing women to perform the traditional sex role of motherhood,” she added.

2022 Michigan ballot issues tracker: What to know about election proposals 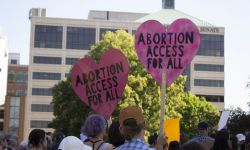