Mail delivery delays up in southeast Michigan in weeks before election

Mail delays have increased in southeast Michigan for the weeks ahead of the Nov. 3 election, a congressional investigation spearheaded by Michigan Sen. Gary Peters concluded in a report published Tuesday.

About 70 percent of mail was delivered on time (within five days) in the Detroit region the week of Oct. 3, the most recent period available — the worst on-time delivery rate of any district in the nation. Nationally, the Postal Service made more than 86 percent of deliveries on time.

The delays persisted months after purported cost-saving policies implemented by Postmaster General Louis DeJoy were quashed, with one federal judge writing it was “easy to conclude” the policies were intended to “disrupt and challenge the legitimacy” of the election that will be conducted disproportionately by mail in Michigan.

It’s unclear whether the delay in southeast Michigan would impact election-related mail, which is supposed to be prioritized. But the findings align with a message from state election officials to drop absentee ballots off in person at a ballot drop box or local clerk’s office in the two weeks before the election.

“If you have a ballot in your possession right now, fill it out and drop it off in a drop box or come into a clerk’s office and make sure you hand-deliver it,” Gov. Gretchen Whitmer said Wednesday. 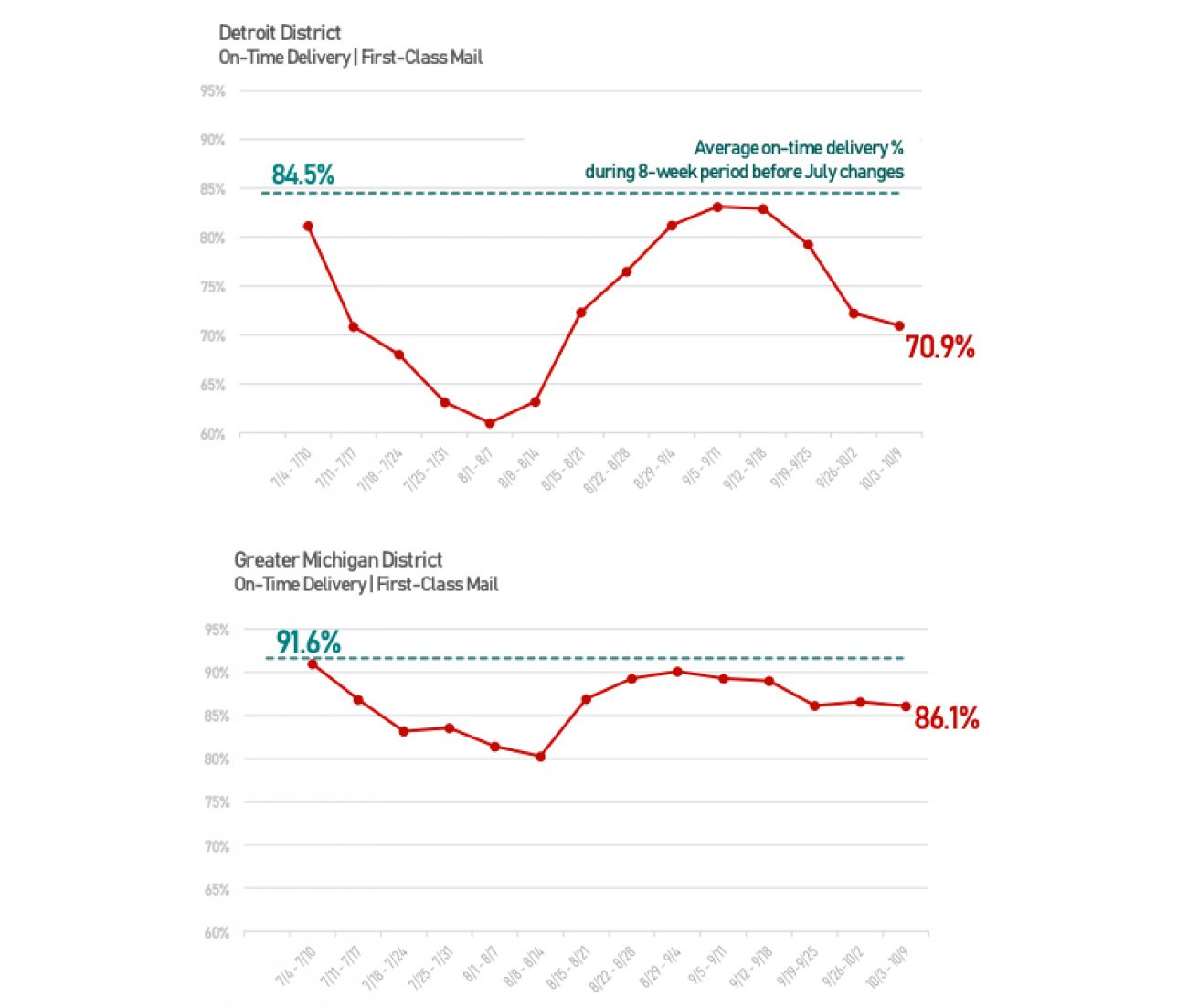 “We’re getting too close to the election to throw it in the mail. We want to make sure that these ballots get in.”

State election officials estimate turnout will break the record of 5 million votes set in the 2008 presidential election. At least 3 million of those votes are expected to be cast by mail.

Already, more than 1.5 million people have already voted absentee in the election, and an additional 1.5 million have requested ballots.

Ballots must reach clerks by 8 p.m. on Election Day in order to be counted. That deadline has been the subject of litigation in Michigan, with one judge ruling the extraordinary circumstances of the pandemic and reported postal delays may fundamentally impede the right to vote this fall.

A panel of judges reversed that ruling late last week, leaving voters who choose to vote by mail with a firm deadline of Election Day.

Overall, on-time deliveries in the Detroit area dropped by more than 12 percentage points since the start of September, according to the report.

Four other districts across the country — those covering Washington, D.C.; Baltimore, Mississippi; Alabama and Philadelphia — also had on-time delivery rates below 80 percent the week of Oct. 3.

Nearly all of the recent delays have slowed deliveries by one to three days, the report read, adding that “a delay of even one day can have a significant impact on important mail, including medicine, bills, or election mail.”

Michael Mize, president of the Michigan Postal Workers Union, told Bridge that shipments of absentee ballots from clerks to voters are pulled, marked and prioritized to get into the system quickly. But it’s possible any delays could impact ballots being returned to clerks from voters, which trickle in individually.

“Some of our offices have diligently tried to pull out a lot of that mail … and take it right to the city clerk the next day,” Mize said.

But official ballots have trackers on the envelope now so it can be traced through the postal system, “so anything coming back is just kind of going through the regular mail stream the way that every other letter goes.”

The other Michigan postal district, the “Greater Michigan District,” has had stable delivery rates over the last few weeks, at around 86 percent.

“Michiganders are counting on the Postal Service to deliver their mail on time, and this decline in service across the state is completely unacceptable,” Peters, D-Bloomfield Hills, said in a statement.

“The postmaster general must immediately comply with all court orders and confirm he has reversed damaging changes that caused severe disruptions to mail service.”

In late September, a federal judge ordered DeJoy to reverse many of those policy changes and required the agency to prioritize election mail amid an unprecedented number of absentee ballots expected to be cast in the November presidential election.

However, equipment in Michigan that was removed or taken out of operation weren’t replaced after DeJoy’s other policies were reversed, Mize said. At least 10 machines in Michigan facilities were dismantled over the summer.

A spokesperson for the Postal Service’s Detroit District did not immediately respond to a request for comment on Peters’ report Wednesday.