More than 13,000 people registered to vote and cast a ballot on Election Day, Secretary of State Jocelyn Benson told reporters Tuesday night. Just over 6,000 of those registered and voted after 4:30 p.m. Many were young people voting for the first time.

Around 1 million people voted absentee — nearly doubling the total number of people who voted absentee in the 2016 presidential primary and on par with the number cast in that year’s general election.

To Benson, that’s a “great thing.”

“While this expansion of our democracy was historic, it also brings with it challenges for the more than 1,500 election clerks across our state,” Benson said.

Others weren’t so impressed.

“It’s time to work together to make sure all Michiganders have fair and equal voting access,” Lyons-Eddy said.

At some city clerk’s offices, the waits to register to vote stretched hours.

It’s nearly 10 pm, AP has called the presidential primary for #Biden and people are still in line to register in #EastLansing @LSJNews pic.twitter.com/dri1FNLKdp

Benson said long lines there and in Ann Arbor, Kalamazoo, Grand Rapids and Dearborn were due to a “bottleneck” caused by residents registering and casting in-person absentee ballots on the same day.

She said her office will explore ways to help those locations open satellite offices to help ease congestion in November.

The problems largely seemed confined to a handful of cities, however.

Elsewhere, lines were short. Some estimated that was because so many had already voted absentee.

Lansing City Clerk Chris Swope told Bridge Tuesday evening that the city had registered more than 200 people that day and sent out 11,791 absentee ballots, which is “presidential general election level.”

“It's really exciting to see” the uptick in registration, Swope said. “It's not just young people. I'm actually surprised by the number of people with driver's licenses that show that they've been at this address for six years who are coming in registering for the first time. It’s really heartening.”

One other result of the reforms that final results likely won’t be complete until Wednesday, Benson said.

Biden was cruising to an easy victory and several news outlets declared him the winner, but the exact count may be delayed. That’s because absentee ballot counters must remove each ballot from two envelopes and prepare to put into a tabulator, and they can only begin at 7 a.m. on Election Day.

Benson and local clerks have pushed the Legislature to allow for early processing of ballots to speed up counting on Election Day, but legislation stalled before the primary.

There are likely to be more than 2 million people casting absentee ballots in the general election in November, “significantly more” than in 2016, she said, urging lawmakers to push changes forward.

“We predicted the significant surge in absentee votes,” Benson said. “What we've encountered is a number of others who are not, particularly in the legislature, willing to make those same data-driven analyses and decisions.”

The level of absentee voting that happened across the state was “remarkable,” said Adrian Hemond, partner and CEO of Lansing-based consulting firm Grassroots Midwest.

The Sanders campaign, which performed well with college-aged voters in 2016, “made a concerted effort” to get out the vote among their supporters using the new access to last-minute registration. “But it doesn’t appear to have paid off,” Hemond said.

In the future, that may mean campaigns may begin ads with voters “earlier and earlier” because they’ll be able to cast ballots within 40 days of the election, Hemond said.

In Detroit, few polling places saw long lines, said Ernest Johnson, Detroit Democratic operative, partially because people voted early through absentee ballots. And that could have a big effect on the November election, he said.

“We’re going to have way more voters participate in November,” Johnson said. “That’s bad news for Donald Trump. The 10,000 votes that he won by four years ago — we’re going to double that number in Detroit alone.”

Senate Majority Leader Mike Shirkey says Democrat Joe Biden is the president-elect and the Legislature’s investigation of the election won’t change the results in Michigan. 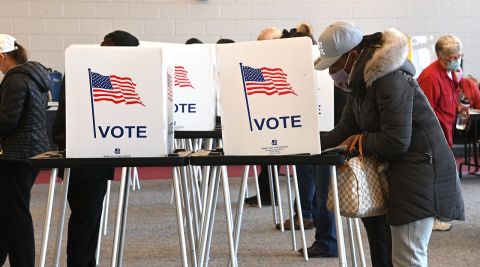 Four partisans must certify Michigan’s election. One makes no promises.

A majority on the Board of State Canvassers — which consists of two Democrats and two Republicans — must vote to certify Michigan’s election. One GOP member, whose wife was a poll challenger in Detroit,  offers no guarantees. “What prevents people from cheating?” he asks.

Of course there were problems. That's what the proponents of Prop 3 wanted in the first place: Mess up the (then) current system, so you can go back and take another crack at making the problem even worse.

What other possible outcome did they expect would occur when they overwhelm the system by having people showing up in large numbers at the very last minute on election day?

You reap what you sow.

I cannot get over how your comments keep getting dumber. I mean, we all know you probably are cool with voter suppression of the poor and minorities, given your misanthropic stance on literally every position, but I don't know how your addled brain is squaring the circle with this take

Ah, Bones, using the same old (and very tired) reply when you cannot think up a valid response.

So, let me bottom line it for you: Why is expecting the "poor & minorities" to adhere the most basic level of personal responsibility (you know, the same exact thing as everyone else does on a daily basis) now viewed as...{cue the foreboding music} "voter suppression".

You're telling me that the poor & minorities now incapable of using a computer? A cell phone? A calendar? A newspaper? Their local library? How about the US Postal Service?

Another fact doesn't change either, you cannot swamp local clerks with an influx of work at the last minute and still expect them to perform as usual. Our elections, by their very nature, are a VERY labor intensive process. The people pushing for "Promote the Vote" (or anyone with knowledge on how politics work here in Michigan) knew this irrefutable fact very well. To claim otherwise strains all credibility.

I cannot get over how your comments keep getting dumber. I mean, we all know you probably are cool with voter suppression of the poor and minorities, given your misanthropic stance on literally every position, but I don't know how your addled brain is squaring the circle with this take

I've said it before and I'll say it again: the only reason for the delay in counting absent voter ballots is poor planning and preparation on the part of the local units. If you know there is going to be a huge increase in AV ballots, hire more people! And as for the long lines to register-that's what you get for waiting until 8:00 PM to register on election day-get your butt in gear and get registered ahead of time!! Such nonsense.

They should recruit retired state employees to volunteer. We can certainly open envelopes.