Democratic presidential hopeful Joe Biden rallied in Detroit on Monday night, where he touted his past work on the Great Lakes Restoration Initiative. (Bridge photo by Jonathan Oosting)

U.S. Sens. Kamala Harris of California and Cory Booker of New Jersey rallied with Biden at Detroit’s Renaissance High School, where hundreds of supporters packed a small gymnasium to support the former vice president on the eve of Michigan’s closely watched primary.

But protesters interrupted the kumbaya moment, chanting “Joe Biden has got to go” moments after he took the stage. 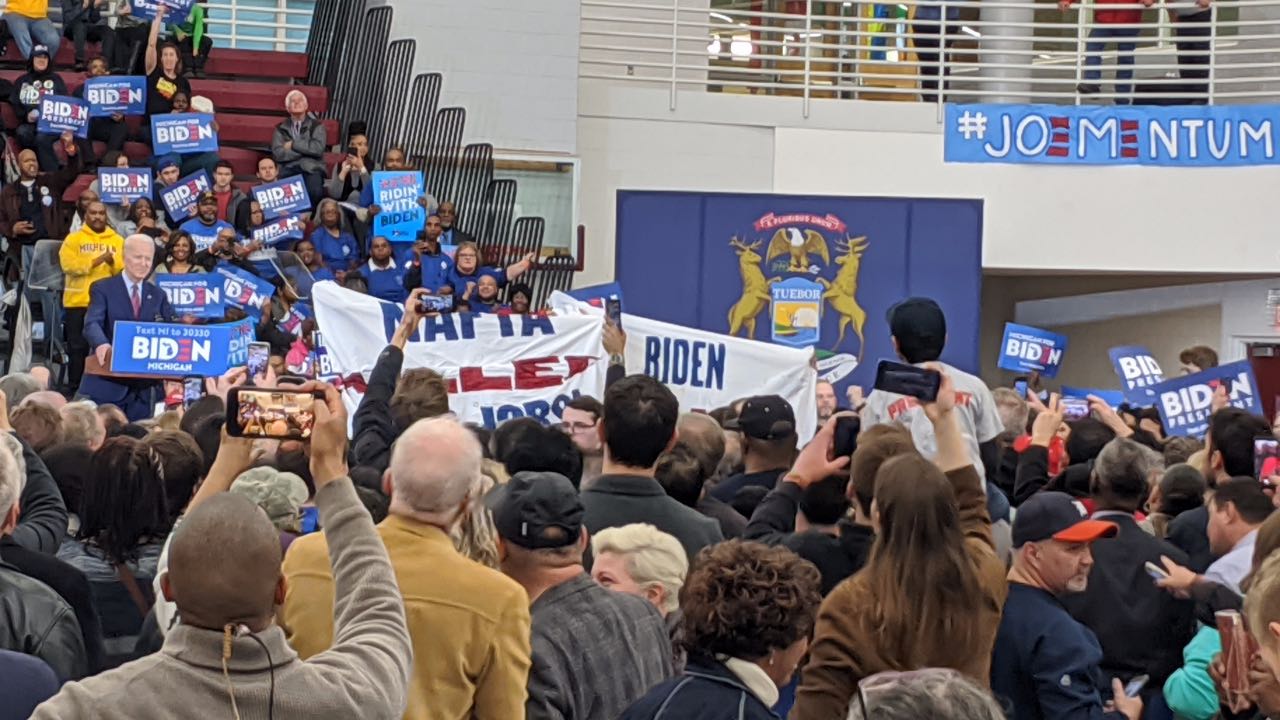 Sanders, locked in a tight fight with Biden for the Democratic Party nomination, won Michigan’s 2016 primary and is again aggressively targeting the state and the 125 pledged delegates at stake in Tuesday’s primary.

In his roughly 23-minute speech in Detroit, Biden touted his past work on the Great Lakes Restoration Initiative and plans to fight climate change, vowing to immediately rejoin the Paris climate accord that Trump abandoned.

After four years of Trump in the White House, “we have to heal our division, otherwise our democracy is going to be in real jeopardy, beyond what it is now,” Biden said. “The world is watching.”

Michigan Gov. Gretchen Whitmer and Detroit Mayor Mike Duggan, who are both backing Biden, spoke at the rally and praised the former vice president for his role in the 2009 auto industry bailout expansion that is widely credited with helping save General Motors and Chrysler from collapse.

Booker, whose mother was born in Detroit, urged local voters to “stand up, speak up, and rise up” to defeat Trump in November.

Sanders has promised a political revolution and is campaigning on a platform that includes creation of a single-payer health care system, free college tuition and student debt forgiveness.

“I just don’t think any of those ideas are radical," Sanders said in his Fox News town hall, later arguing his philosophies are too often conflated with communism.

Biden enters Michigan with a delegate lead and momentum following a series of wins in Super Tuesday states and South Carolina, where he fared particularly well with African American voters.

Polls show Biden with a big lead in the Michigan primary, but Sanders was also behind in 2016 when he pulled off an upset in the state against eventual nominee Hillary Clinton.

Biden drew a diverse crowd in Detroit, a Democratic stronghold that backed Clinton in 2016. Several supporters wore hats and pins honoring former President Barack Obama, who Biden served under as vice president from 2009 to 2017.

“If he was good enough for President Obama for two terms, he’s good enough for me,” said Thomas Wilson, a 73-year-old retired Detroit Public Schools teacher. “We got to bring some normalcy back to this country. We’ve got to get some lost respect back.” 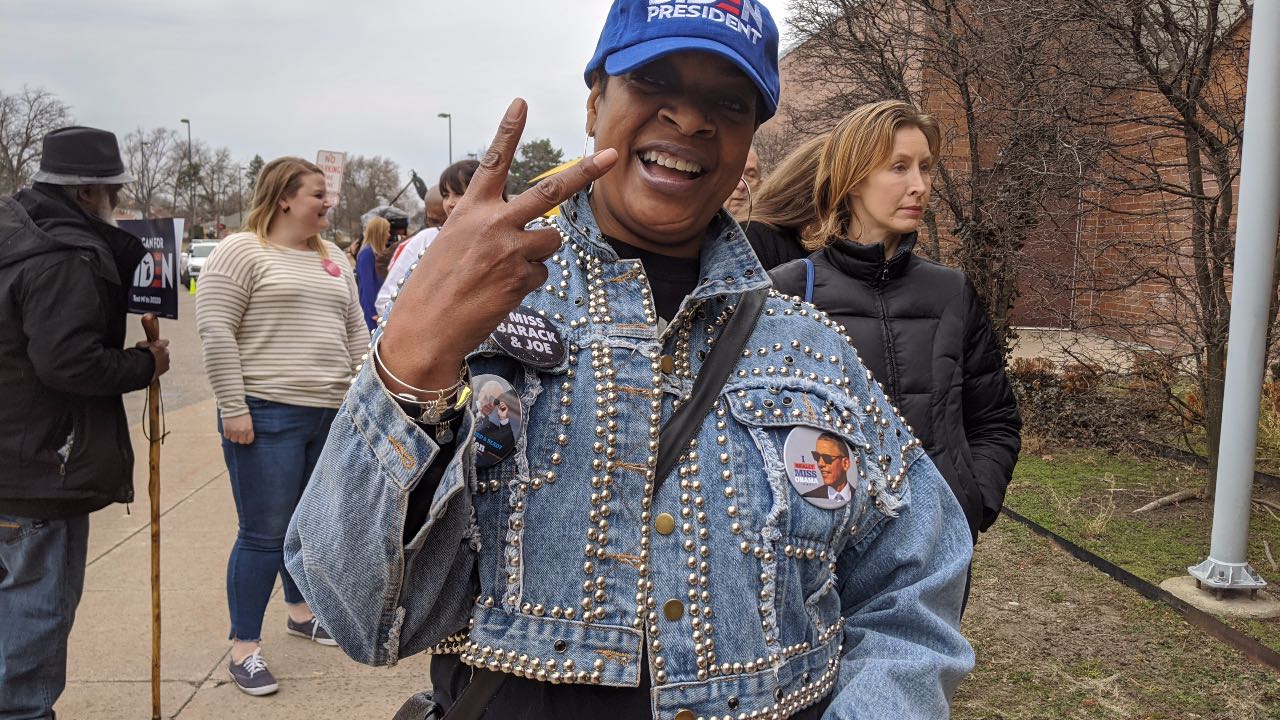 Corlette Selman, a 59-year-old Detroit cosmetologist and a self-described “Biden-Obama Democrat” said she would vote for Bernie Sanders if he ends up winning the party’s presidential nomination. (Bridge photo by Jonathan Oosting)

As a former vice president, Biden is "abreast of the friends and foes of our country, and he is trustworthy," said Corlette Selman, a 59-year-old Detroit cosmetologist. "I love his beautiful, kind heart.”

Selman described herself as a “Biden-Obama Democrat” but said she would vote for Sanders if he ends up winning the party’s presidential nomination.

"I love Bernie as well, but I feel that at this time, when the country is in so much chaos, we cannot afford to be further divided over a whole new thing of health care," she said, referencing Sanders push to create a single-payer health care system.

But the rally was not without its problems, including long gaps between speakers that caused some attendees to leave. Earlier Monday, Biden stopped in Flint and Grand Rapids at events that were coordinated late and drew comparatively small crowds.

Sanders, in contrast, drew huge crowds during rallies Sunday in Ann Arbor and Grand Rapids. His key demographic remains young people, who turned out in big numbers in Michigan four years ago to fuel his upset.

While youth turnout has waned in early states, there were some signs of another surge Monday in Ann Arbor, where students registered and voted absentee.

Janani Gandhi and two friends stood in line more than an hour to cast early absentee ballots for Sanders, whom they saw speak Sunday night on campus before an estimated crowd of 10,000.

"A lot of people have been waiting here for a long time, so I think people are excited," said Gandhi, 23. But "it is kind of discouraging because we have also seen a lot of people walk in, see the line and then just leave."

Gandhi had planned to vote for Sen. Elizabeth Warren of Massachusetts but decided to support Sanders after Warren dropped out because "they're really aligned ideology."

Gandhi said she'd "definitely" vote for Biden if he is the nominee but is concerned that he won't inspire the same sort of enthusiasm as Sanders would in the general election.

"A lot of people who are voting for Joe Biden are voting against Trump, rather than for Biden," she said. "I think that Sanders supporters are a lot more excited and more likely to show up for the general and campaign really hard." 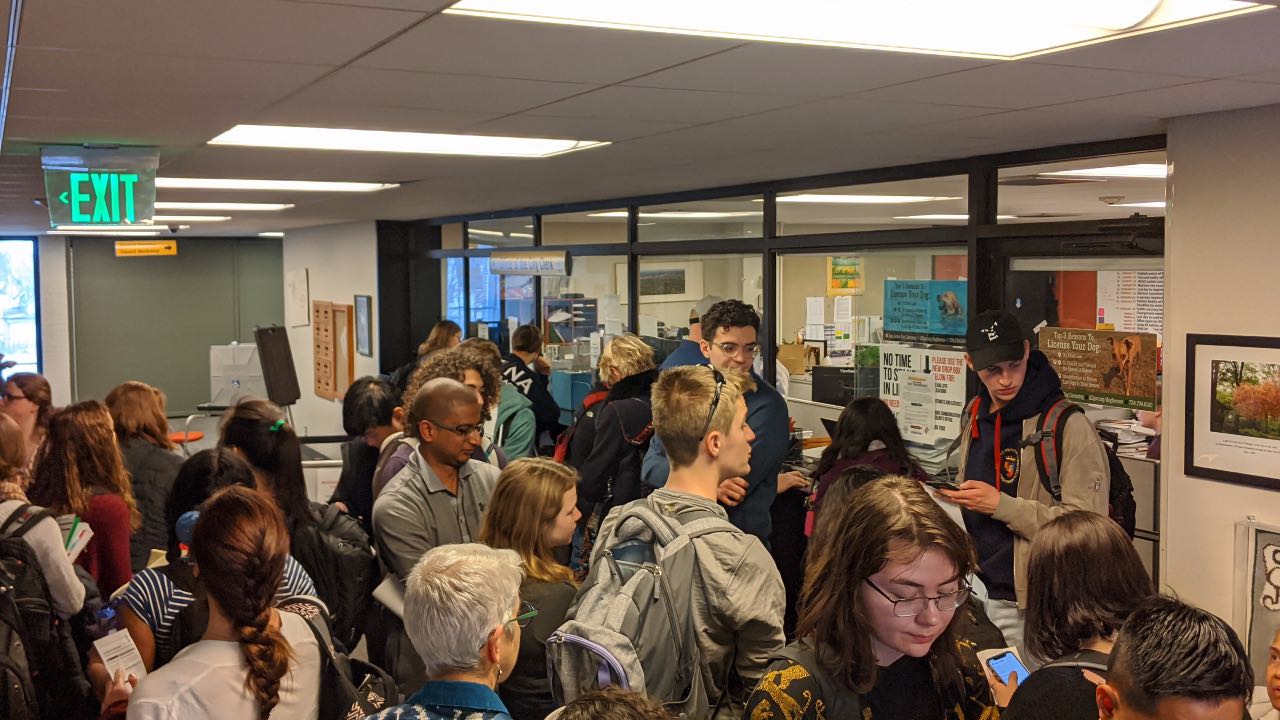 In Ann Arbor, lines were long at the clerk's office, where voters showed up for absentee ballots. (Bridge photo by Jonathan Oosting)

Early voting is more widely available in Michigan this year because of a new voter-approved law allowing anyone to cast an absentee ballot without the need for an excuse, such as age.  Under the 2018 law, first-time voters can now register up to an on Election Day.

The Ann Arbor line was frustrating for J.C. Rosenberg, a 91-year-old retired physician who said he had to come to the clerk's office because he did not get an absentee ballot application by mail this year, as he had in years past.

"It was originally meant to accommodate individuals who were unable to come down or had difficulty coming down," he said of the absentee option. “This isn’t an efficient way to do it.”

Rosenberg and his wife, who had voted Republican earlier in their lives but started backing Democrats more than a decade ago, planned to vote for Biden.

"He knows the Republicans and can work with them, and I think that right now is essential," Rosenberg said of Biden. "Right now the polarization is self-defeating. I think Trump has been so disruptive."

Will Biden remember us if he wins the nomination or will he pull a Clinton and assume that Michigan is in his pocket for November. Also anyone supporting Biden should worry about his lackluster and disorganized campaign. The republicans are organizing all out for Trump and will blitz the opposition in the months to come. If Iowa is any indication of the national parties disfunction under the Clinton holdovers and lackeys then we’re all in trouble eh. Trumps a lousy president and a disinterested administrator but a great marketer and player of roles. People are inclined to buy into a compelling narrative. Trump has one, it’s all lies and nonsense but it’s compelling just the same.

A bigger question is how many ballots will duggan destroy fr that republicans backed Bernie
Remember in2016 election 75000 ballots were destroyed AND NOT COUNTED!!!!

Warring bernies group "OUR Revolution" that he started in 2016 is a very violent they have threaten Elisabeth Warren, AOC, and event OUR Gary Peters!!! If bernie does not win they will do all that they can to disrupt OUR elections and make sure trump is re elected!!! Go to their meeting it like being in one of Hitler meeting before he took over Germany!!! They are far worse then trumps KKK and Neo-Nazis. they will stop at nothing to get bernie into the white house!

First I would compel you to actually visit the daily stormer. You want to KNOW WHAT NEO NAZIS ARE? Copy and past the name. I am not going to do it for you, you are the one that has the magnanimous attitude that you are RIGHT, So.................PUSH IT!

What I am going to tell you is this, those people in Southern Florida who "ran away from Castro?" I would ask them this : Who is Fulgencia Batista? And are you for him and the way he ruled the Island of Cuba under the auspice of America?

Fulgencio Batista y Zaldívar (/bəˈtiːstə/;[1] Spanish: [fulˈxensjo βaˈtista i salˈdiβaɾ]; born Rubén Zaldívar;[2] January 16, 1901 – August 6, 1973) was a Cuban military officer and politician who served as the elected President of Cuba from 1940 to 1944, and as its U.S.-backed military dictator from 1952 to 1959, before being overthrown during the Cuban Revolution. Batista initially rose to power as part of the 1933 Revolt of the Sergeants, which overthrew the provisional government of Carlos Manuel de Céspedes y Quesada. He then appointed himself chief of the armed forces, with the rank of colonel, and effectively controlled the five-member "pentarchy" that functioned as the collective head of state. He maintained this control through a string of puppet presidents until 1940, when he was himself elected President of Cuba on a populist platform.[3][4] He then instated the 1940 Constitution of Cuba [5] and served until 1944. After finishing his term he lived in Florida, returning to Cuba to run for president in 1952. Facing certain electoral defeat, he led a military coup against President Carlos Prío Socarrás that preempted the election.[6]

Back in power, and receiving financial, military, and logistical support from the United States government,[7][8] Batista suspended the 1940 Constitution and revoked most political liberties, including the right to strike. He then aligned with the wealthiest landowners who owned the largest sugar plantations, and presided over a stagnating economy that widened the gap between rich and poor Cubans.[9] Eventually it reached the point where most of the sugar industry was in U.S. hands, and foreigners owned 70% of the arable land.[10] As such, Batista's repressive government then began to systematically profit from the exploitation of Cuba's commercial interests, by negotiating lucrative relationships with both the American Mafia, who controlled the drug, gambling, and prostitution businesses in Havana, and with large U.S.-based multinational companies who were awarded lucrative contracts.[9][11] To quell the growing discontent amongst the populace—which was subsequently displayed through frequent student riots and demonstrations—Batista established tighter censorship of the media, while also utilizing his Bureau for the Repression of Communist Activities secret police to carry out wide-scale violence, torture and public executions. These murders mounted in 1957, as Fidel Castro gained more publicity and influence. Many people were killed, with estimates ranging from hundreds to about 20,000 people killed.[12][13][14][15][16][17][18]

Remember, Marco Rubio claimed his mommy and daddy ran away from Castro, but really thy ran away from Batista! That is the same reason that Ted Cruz dad fought WITH Castro against Batista!

I know! Facts suck! And the Truth HURTS!

Glad I could help!

That's all I can say.

To get a better idea why, go to 0:15 in the video below to see what is actually missing here.