LANSING — Kylie Myrand describes it as the scariest three minutes of her life.

The 16-year-old Oxford High School student was locked in a classroom and waiting for her brother, a freshman, to text her back while a shooter opened fire in the school’s hallways.

When her brother finally responded three minutes later to say he was OK, her relief was short-lived, Myrand recalled Monday.

There was shouting in the hallway. Then, someone handed her textbooks to try and "counter the shooter if he got past the locked doors and barricaded desks," she said during a conference call on Monday. "I was trembling... just knowing that this is what we've been trained for since whenever I can remember."

Myrand survived the school shooting. But four classmates were killed: Hana St. Juliana, 14, Madisyn Baldwin, 17, and Tate Myre, 16, whom Myrand described as her "close friend" with a "goofy and dedicated personality." A student, Ethan Crumbley, 15, faces murder charges in the spree.

Less than three months later,  Myrand is back at school and urging action in Lansing, where she wants the Republican-led Legislature to pass safe storage gun bills introduced by Democrats. The bills would require adults to secure guns in a lock box if they have minors in the house.

"Oxford isn't the same without those four kids," Myrand said of classmates killed in the shooting, which occurred days after authorities say Crumbley’s dad took him to a gun store and purchased the 9mm Sig Sauer SP 2022 pistol he would later bring to school.

"Things are different, and things need to change," she said. "I will never understand how a 15-year-old could go into a gun store point at the weapon of choice, and then days later use it to kill four students."

Myrand spoke during a virtual launch for End Gun Violence Michigan, a new coalition of community and faith leaders exploring plans for a 2024 petition drive and ballot proposal to reform Michigan gun laws if the Legislature does not do so on its own.

Organizers announced the potential petition drive Monday, the four-year anniversary of a school shooting in Parkland, Florida, that left 17 dead and spurred firearms reforms in that state.

"We're sick and tired of nothing happening in Lansing," organizer Ryan Bates told Bridge Michigan. "For years, the deaths have mounted, not just school shootings, but everyday violence in cities like Detroit, and we're just horrified that nothing's changed.

"We're coming together to give the Legislature one last chance to make some changes and if not, we'll start the process of putting a ballot initiative together,” he said.

Organizers are urging GOP leaders to hold hearings and votes on Democratic bills, including proposals to ban the sale of high-capacity ammunition magazines, create a “red flag” gun confiscation law and create criminal penalties for adults who fail to secure guns that minors use to hurt themselves or others.

The fate of gun control legislation remains uncertain in Lansing, where Republicans who control both chambers have generally worked to expand gun rights and reduce government regulations.

Senate Majority Leader Mike Shirkey, R-Clarklake, plans to hold a public hearing on the red flag bills, which would let a judge authorize police to temporarily confiscate guns if there is "reasonable cause" to believe the owner would hurt themselves or others.

Florida passed similar legislation in the wake of the Parkland shooting, and Shirkey promised a hearing on similar bills in 2018.

But the GOP leader has not backed the bill or promised a vote, and he's taken heat from gun rights groups who have accused him of "caving to anti-gun demands." They call the red flag bills "an affront to law-abiding Michiganders."

The task force has spent the past month meeting with stakeholders and could release an initial set of policy recommendations "soon," co-chair Luke Meerman, R-Coopersville, told Bridge Michigan last week.

Meerman declined to say whether the task force recommendations will include any gun reforms or focus primarily on school security and other less contentious issues.

The task force has so far met with parents of children involved in the Parkland shooting, along with Oxford Superintendent Tim Throne and parents impacted by the 2012 Sandy Hook Elementary School shooting in Connecticut.

Gun control advocates considering a ballot initiative are waiting to see what the task force recommends and whether the Legislature approves any reforms, according to Bates.

"There's a whole package of bills — everything from universal background checks to red flag legislation to safe storage laws that haven't even gotten a hearing,much less a vote," he said. "So we're going to be demanding the Legislature vote on these measures."

The group will not pursue a 2022 ballot initiative because the timeline is too tight, Bates told Bridge Michigan.

Instead, the group is beginning to develop plans for 2024, including potential funders for a petition drive and campaign that could cost millions of dollars.

"We're not ready to talk about finances yet, but the goal is to put together a credible organization that can do these sorts of things," he said.

An initial "steering committee" for the organization includes Michigan United, March for Our Lives and Oakland Forward community groups, along with the Episcopal Diocese of Michigan, Council of Baptist Pastors of Detroit & Vicinity, Church of the Messiah Detroit, Interfaith Action of Southwest Michigan and the Charles W. Reid Community Help Center.

Teen activists are joining the cause.

"Instead of teaching students how to survive a school shooting, we should be doing everything we can to prevent them from happening," said Jayanti Gupta, a student at Troy International Academy East and a Michigan organizer for March For Our Lives, a national group initially formed by students at Marjory Stoneman Douglas High School in Parkland.

"If the Legislature won't act then we're ready to put on our marching shoes, get out our clipboards and put gun violence on the ballot,” she said.

Reina St. Juliana, an Oxford junior whose sister was killed in the recent shooting, is expected to join legislative Democrats at the Michigan Capitol on Tuesday for a news conference touting safe storage bills.

Under the legislation, adults who fail to keep their guns inaccessible from minors could be charged with a felony if the gun is used in a shooting death, including suicide.

Supporters contend the growing package of Democratic-sponsored bills awaiting action in the Michigan Legislature are common sense measures that even many gun owners support. In 2018, for instance, an EPIC-MRA survey found roughly 70 percent of Michigan voters supported the idea of "red flag" legislation, including 64 percent of Republicans.

But gun rights groups are attempting to pressure Shirkey in the other direction, urging him to instead hold a hearing on legislation that would make Michigan a "constitutional carry" state by repealing penalties for carrying a concealed pistol without a permit.

Shirkey has not responded to that criticism but has urged a cautious approach to legislating in the wake of the Oxford shooting.

“If we get obsessed with eliminating all risks, we will then develop and evolve into a country we won’t recognize, because we'll also have no freedoms,” he said in December. “It's a very narrow road, and it's hard." 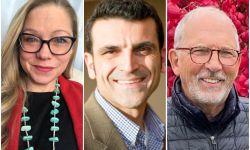