Redistricting proposal to appear on Michigan ballot, only Supreme Court in way

An effort to change the way Michigan draws voting district lines will officially appear on the ballot this November, pending a challenge before the state Supreme Court.

The Michigan Board of State Canvassers unanimously approved the proposal Wednesday as cheers of supporters filled a fluorescent-lit hall of the Lansing Center.

“Now our job is to make sure the people of Michigan know what this is about,” Katie Fahey, executive director of the group behind the proposal, Voters Not Politicians told reporters Wednesday. “This is a really critical reform that will impact elections from now until Michigan stops doing elections.”

Currently, Michigan’s state legislators redraw district lines every ten years after the U.S. Census. Whichever party is in power during that process can greatly influence how those lines are drawn, which has led to accusations of partisan gerrymandering. The ballot initiative would change the system to create a 13-person board of citizens responsible for drawing the lines with the help of consultants and public hearings. 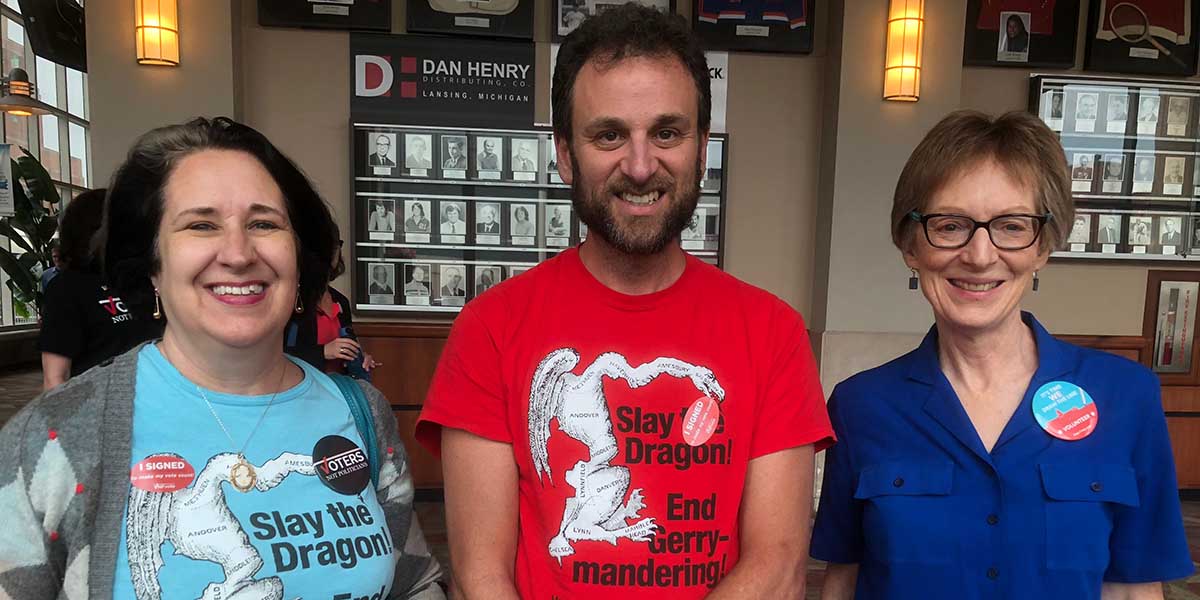 Supporters of the Voters Not Politicians proposal were thrilled with the Board’s decision to certify. At least 200 volunteers attended the board of canvassers meeting.

“We wanted to make a statement of how many people this is passionately important for,” said Gayle Steiner, a volunteer who came from Ann Arbor to witness the vote.

While Wednesday’s ruling was a major victory for supporters of the Voters Not Politicians’ proposal, opponents still hope a possible Supreme Court challenge to its legality will knock it off before election day rolls around.

“I think it just helps spread doubt, which is probably part of the opposition’s strategy,” Fahey said when asked how the outstanding decision could affect the campaign. “But today we had a very clear decision by the Board of State Canvassers that we will be on the ballot and we plan to proceed with that ruling.”

The challenge, introduced by group Citizens Protecting Michigan’s Constitution, argues that the Voters Not Politicians proposal would too broadly change the state constitution and doesn’t properly specify those changes in the petition language.

The state Court of Appeals disagreed with the group’s argument in a decision issued earlier this month. The group appealed to the Supreme Court, which has yet to determine whether they will consider the case.

“We believe the Court of Appeals got this wrong,” Citizens Protecting Michigan’s Constitution, the group opposing the initiative, wrote in a statement released after Wednesday’s ruling. “The action of the Michigan Board of Canvassers is a step in the process but not the end of the process.”

“What the Board of Canvassers is doing is an administrative function,” Dave Doyle, spokesman for Citizens Protecting Michigan’s Constitution, told Bridge earlier this week. The Supreme Court has pulled a proposal off of the ballot after certification as recently as 2001, according to the court clerk’s office.

The groups are expecting to hear from the High Court in mid-to-late July, Fahey said. The Court has until September 7, when constitutional amendment wording is due to the Secretary of State, to issue a decision.

If the state Supreme Court rules against the ballot initiative, I hope The Bridge and other publications will feature each of the justices and the campaign funding they receive. I suspect that at the very bottom of this complex issue is a lot of money sloshing about from monied interests (the Chamber of Commerce, for one) seeking to preserve their unfair grip on elections. Maybe the next ballot initiative should be changing the way the Supreme Court is chosen and getting truckloads of money out of elections.

I fear the Supreme Court will take this case and find a reason to pull this off the ballot. Political forces will not be happy to let the people decide, after all it is best if politicians pick their voters.

I fear the Supreme Court will take this case and find a reason to pull this off the ballot. Political forces will not be happy to let the people decide, after all it is best if politicians pick their voters.

People often feel their Chamber Of Commerce represents the interests of their citizens - they don't ! They represent the businesses against citizens rights as evidenced by their attempt to influence the State Supreme Court into throwing out the ballot initiative to properly redistrict voters areas. They do this by paying off the judges. If this happens for the second time we must vote those bad politically bent judges out of office in their upcoming election effort. Next - businesses in their Chamber of Commerce must tell their officers to let the political process do what it is intended to and that is to do the right thing for their Michigan Citizens. To do otherwise is denying citizens their rights.