More than a quarter of Michigan residents have at least one credit card that is in collections. (Shutterstock)
November 16, 2022
Jonathan Oosting (Email)
Michigan Government
Michigan Supreme Court

LANSING — Debt collectors overwhelmed Michigan district courts with more than 200,000 lawsuits in 2019, and the state must do more to help consumers avoid default judgments that can ruin lives, according to a new report.

The lawsuits comprised 37 percent of all district court cases that year and can be “devastating” for Michiganders who may owe money but not understand the legal process, said Katie Hennessey, an attorney and workgroup co-chair for the Michigan Justice For All Commission.

The commission, created by the Michigan Supreme Court, analyzed the most recent data dating back to 2010 and found that 60 percent of all district court debt collection cases ended in a default judgment, typically because the defendant did not file a written response to the complaint against them.

That's an "alarming” rate for default judgments, which give creditors a sweeping set of "court-sanctioned collection tools" to recoup debts by garnishing paychecks, bank accounts or tax returns, Hennesey said in a media briefing.  Most cases are filed by third-party collectors who buy debt from credit card companies.

The Michigan Justice for All Commission is chaired by state Supreme Court Justice Brian Zahra and includes a coalition of judges, attorneys and other legal experts.  The group is now urging Michigan courts to reform the debt collection case process and consider alternatives to litigation, primarily through rule changes that would require public review.

The report is "groundbreaking" because it shines a light on debt collection cases that "have tended to fly under the radar, in part because of lack of data," said Erika Rickard of the Pew Charitable Trust, a national nonprofit that partnered with the commission on the project.

"Debt collection lawsuits had been overwhelming state court dockets" across the country, said Rickard, who leads Pew’s civil legal system modernization project. "This is a big shift that has largely gone unnoticed by state leaders and yet has profound lasting implications for states, for taxpayers."

Debt collection cases were second only to traffic filings in the state’s 105 district courts, according to the report.

The commission findings have broad implications in Michigan. Statewide, an estimated 26 percent of all residents with a credit card — and 53 percent of people of those who do who live in Black-majority neighborhoods — have at least one debt currently in collections.

Surveys suggest most Americans would be unable to afford an unexpected $400 expense. But debt collection garnishments can "wipe out" a lower-income person's bank account or take up to 25 percent of their paycheck that could otherwise be used on rent, food, utilities or medical expenses, Hennessey said.

Court costs and fees in Michigan typically increase judgment awards by about 10 percent, but can also damage credit scores, according to the report.

Most of the cases appear to stem from "the plastic safety net” as consumers use credit cards to cover basic living expenses, according to the report. Debt collection lawsuits are more likely to be filed against lower-income and minority residents.

Michigan lawsuits from third-party collectors have increased 40 percent over the past decade and in 2019 accounted for 60 percent of all debt cases filed, according to the report.

Like other civil cases, Michigan law requires debt collectors to notify residents when filing a lawsuit against them. Defendants then have the option to file a written response in court and appear for a hearing.

But residents often fail to respond to the initial complaint and typically only begin to "engage in their lawsuit" after a default judgment has been entered against them or their wages are already being garnished, Hennessey said.

In some cases, residents do not understand the complaint against them because it is filed by a third-party debt collector they’ve never heard of, she said. It’s “particularly confusing” for consumers who use store-sponsored credit cards managed by a separate bank that sells the debt to a collection firm.

"From an access-to-justice perspective, this is highly problematic because consumers have fewer options to challenge the plaintiffs claims or raise viable defenses after the judgment is entered," Hennessey said.

The Michigan commission is recommending a series of court rule changes designed to help consumers navigate the debt collection process.

That includes “modernizing serving of process” rules to help ensure consumers receive notice of the lawsuit filed against them, increasing the amount of information and evidence that debt collectors include in a complaint and developing pilot projects to find alternatives to litigation that could benefit both creditors, consumers and courts.

The recommendations, if adopted by the Michigan Supreme Court, "will remove barriers to consumers understanding the claims being made against them, allow them to make more informed decisions on how to proceed with their claims and defend themselves in court if they choose to do so," said Bay County District Court Judge Timothy Kelly, who co-chaired the commission’s debt collection workgroup.

Arizona, Maryland and New York are among a growing number of states who have adopted policies to ensure that creditors and debt buyers disclose "the necessary information to substantiate their claims," Brown said.

But Michigan does not require debt collectors to submit a breakdown of costs and fees when seeking a court judgment. And there's no requirement that third-party debt collectors prove they actually "own" the debt they are seeking to collect, she said.

Many consumers who face a debt collection lawsuit do not have a lawyer, and some others seek one after it is already too late to help, said Patrick Clement, an attorney with Legal Services of South Central Michigan, which represents low-income residents at no cost.

It's "great" that the Michigan Supreme Court is "taking a lead on this issue" through the commission, but "more needs to be done," Clement said.

Michigan is one of four states to receive a failing grade last year from the National Consumer Law Center, which analyzed states based on how well their garnishment laws protect consumers' ability to stay afloat while paying off debts.

"It can be a very difficult fight for people to obtain an installment payment order that truly meets their budget and ability to meet all of their household obligations, and yet pay towards the judgment," Clement said.

"People think that people who owe money are trying to get one over on someone, and it's not that. It's just allowing people to pay off debt at a rate that allows them to live and pay their other bills.” 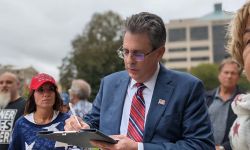