Michigan’s busiest district court will limit the use of cash bail, saying the practice disproportionately burdens poor people and puts them behind bars.

The American Civil Liberties Union of Michigan, the National ACLU and law firm Covington & Burling joined 36th District Court judges on Tuesday to announce that the Detroit court will not detain people for being unable to pay bail, unless a judge determines — after reviewing evidence — that their release poses a flight risk or danger to the public.

The announcement, in front of the 36th District Court, settles a 2019 federal class-action lawsuit, filed on behalf of seven Black plaintiffs, against the court for discriminating against low income people because they were unable to post bail. It argued that poor defendants didn’t have access to lawyers during arraignment hearings when bails were set. The suit called for an overhaul of the bail system.

“This is a historic day for Detroit and a day that will be important for justice in the city for years to come. For decades, thousands and thousands of people presumed innocent were needlessly locked in jail simply because they were too poor to pay bail,” said Phil Mayor, a senior staff attorney with the ACLU of Michigan, at a news conference.

The cash bail system requires that those accused of a crime pay in order to get out of jail while their trial is pending. If they show up to court, they get the money back. If they skip court, the court keeps it. The system is meant to ensure defendants come back to court and face the charges against them, but proponents of bail reform say it has harsh consequences.

They say it unfairly punishes people who can’t pay the money, who then wind up in pre-trial detention. The system places an unfair financial burden, disrupting housing, families and employment and costing taxpayers money by keeping people who have not been convicted in jail, Mayor said.

A report released earlier this year from the U.S. Commission on Civil Rights said that people of color and those with low income are disproportionately impacted by being unable to afford bail. More than 60% of those unable to pay bail bonds fall within the poorest third of society and 80% land within the bottom half, according to the Prison Policy Initiative.

“Throughout Michigan and the nation, it has morphed into mass incarceration of the poor, it punishes people, not for what they’ve done but for what they don’t have,” Mayor said.

Pre-trial incarceration can impact the outcome of a case — spurring guilty pleas, higher conviction rates and longer sentences, according to the Michigan Bar Journal.

Judge William McConico, chief judge of the 36th District Court, said the policy shift has been in the works for three years.

“No longer will being poor result in disparate justice,” he said. “This agreement preserves judicial discretion, while ensuring that judges are exercising that discretion lawfully and wisely.”

The move, McConico said, will also mean the pressures of being in jail don’t result in plea bargains.

“We believe this agreement will serve as a model (for) courts in Michigan and indeed throughout the nation. It is possible to develop policies and practices to reduce unnecessary incarceration associated with cash bail, while still protecting the public,” McConico said.

Judge Larry Williams, of the 36th District Court, said the court recognized there was a problem with people being in custody for low level offenses, like civil and traffic infractions. 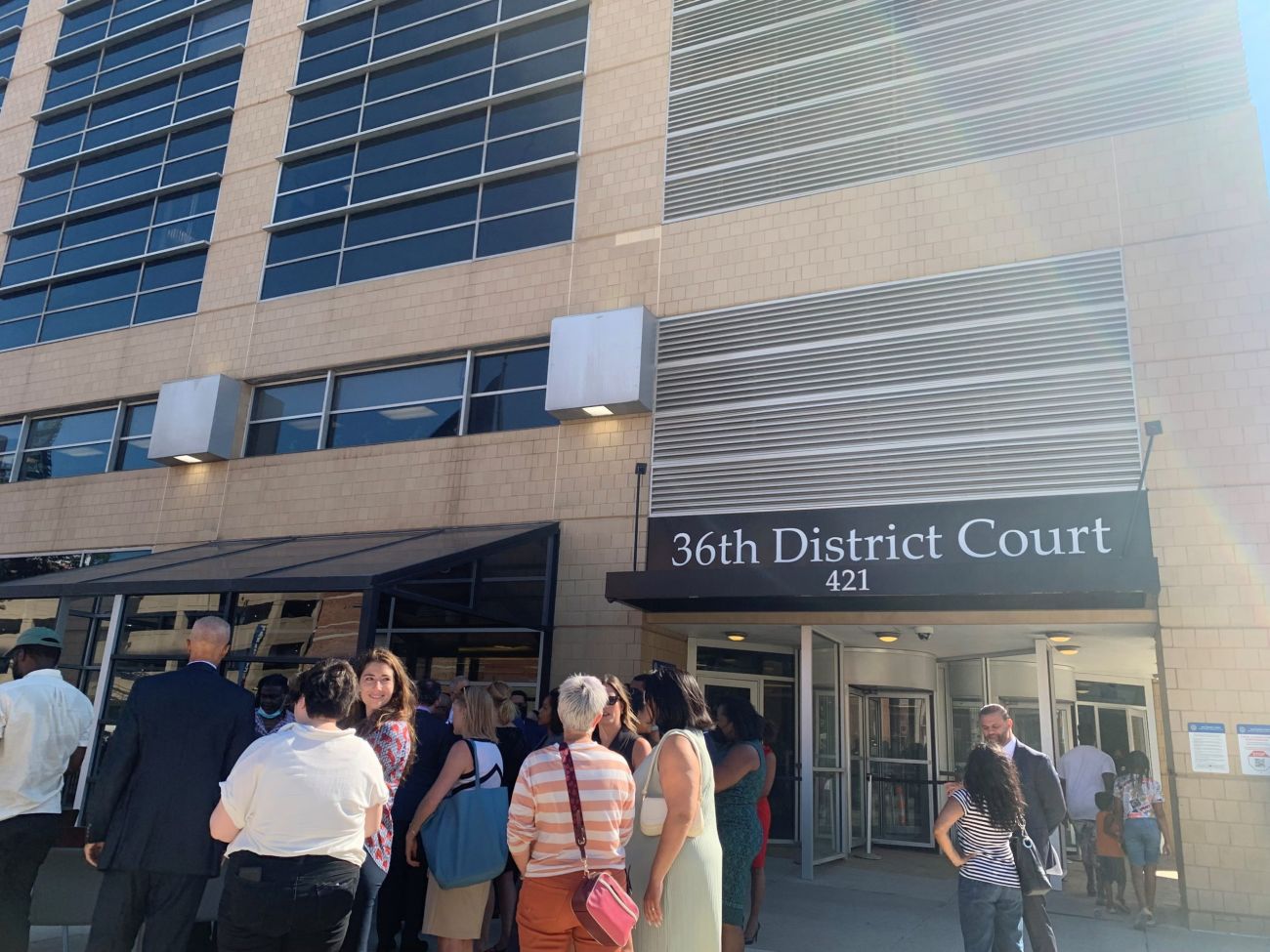 Michigan’s busiest district court will limit the use of cash bail for low level offenses, saying the practice disproportionately burdens poor people and puts them behind bars. (Nushrat Rahman)

“Judges will not impose cash bail, without first making a finding about how much the person can afford,” Mayor said.

Among the reforms under the new agreement, which would be in place for two to five years, according to a news release:

“This agreement will allow people charged with low level, low risk offenses to return to work and to family. This will give some relief to our deputies who are burdened with processing individuals who don’t pose a public safety or flight risk,” said Wayne County Sheriff Raphael Washington.

McConico said the Wayne County Prosecutor’s Office and Detroit Police Department were not part of the negotiation of the settlement, but noted that the Wayne County Sheriff’s Office was a partner in the policy shift because that department runs the jails.

Wayne County Prosecutor Kym Worthy said Tuesday in a statement that she doesn’t have an issue with no cash bond for lower level and non-violent offenses and traffic violations with the exception of drunk driving, domestic violence, civil infractions and ordinance violations.

“It is unfortunate that (the Wayne County Prosecutor’s Office) was not part of the process when 36th District Court and the ACLU were discussing this,” Worthy said. “The agreement is a bridge too far when it comes to violent crime. We have recently seen disturbing results when defendants with violent crimes are given inappropriate bonds. I am not at all convinced this is the solution for serious felonies.”

The Detroit Police Department said in a Tuesday statement that the department has not thoroughly reviewed the agreement and cannot yet comment.

“It is important, however, that appropriate bonds are fixed for individuals who commit serious offenses to better ensure public safety,” the statement reads.

Starmanie Jackson, a plaintiff in the 2019 ACLU suit, spent time in jail because she was unable to pay $500 bail. It left long lasting scars. She was never asked if she could afford the amount, she said. At the time, she had two kids at home, ages two and four.

“I had never been separated from my children for that length of time. It was devastating for all of us,” Jackson said in a video statement. She described the experience as torture and said her children suffered separation anxiety, seldom allowing her to leave their sight when she returned.

Jackson was arrested on a misdemeanor charge related to an alleged domestic violence dispute and it was her first time arrested, she said. Appearing before a judge during the bail hearing was confusing and she had no legal representation.

Her friends and family took care of her kids and put together the cash to get Jackson out of jail.

“Unable to call into work, I lost my job at a nursing home. Because I could not pay my rent, we lost our home,” she said. The agreement means others will be spared the hardships she faced, Jackson said.

Plaintiff Davontae Ross said a week in jail cost two years of being in his kids’ lives, because he was unable to make a custody hearing while locked up.

“Losing your kids like that is like having your heart ripped out of your chest,” he said in a statement. He missed holidays and birthdays and his daughter’s first steps.

Three years ago, he was arrested for failure to appear in court after getting a ticket for being in a city park after dark, he said. Cash bail was set at $200, which he could not afford. Ross said he was not asked if he could pay that amount. He said he was only released because of overcrowding at the jail.

“I never had to serve any time because of the ticket, only because of bail,” he said. “Emotionally it was very difficult to deal with, just functioning was hard. At times, I even considered suicide.”

Ross was able to get back on track and has a steady job at a sandwich shop. He has since reunited with his children.

“No one should have to sit in jail and have their world turned upside down just because they are too poor to buy their freedom.”

“The practice that we’re dealing with here today harms defendants, their families, but it also harms our communities and in particular, communities of color and as a result, it further risks eroding the public’s trust in the criminal justice system,” Holder said.

Mayor, of the ACLU, said the 2019 lawsuit was brought against Detroit because it was the busiest court.

“The knee jerk use of cash bail, the inequities that it causes is unfortunately widespread throughout the state,” he said.

Michigan lawmakers have introduced legislation to reform the cash bail system, but those bills haven’t had committee hearings yet, Mayor said.

In 2021, lawmakers adopted a slate of jail reform bills inspired by recommendations from a statewide task force, including eliminating driver’s license suspensions for unpaid tickets and courts fines unrelated to safe driving.

The taskforce in a 2020 report found that the number of people in Michigan jails tripled from 1975 to 2016. And while Black men make up 6% of the state’s population, they account for 29% of jail admissions, according to a sample of jails the task force analyzed.

A number of states, including New Jersey and Georgia, have passed bail reform laws.