“We don't have a gun problem; we have a mental health crisis,” Mattawan chiropractor Garrett Soldano said on outdoor stage at the Mackinac Policy Conference, an annual gathering of business and political leaders.

The four-candidate debate came less than two weeks after a gunman opened fire with an AR-15 at an elementary school in Texas, killing 19 students and two adults, and six months after 15-year-old Ethan Crumbley allegedly used a handgun his parents had bought to kill four classmates in Oakland County.

Among other ideas, Soldano proposed allowing teachers who choose to carry guns to be armed in the classroom and providing them with annual training so they are ready to respond to an active shooter.

“When evil comes knocking at that door, they should know there's going to be a fistfight in a phone booth on the other side of that door,” he said.

“It doesn’t need to be teachers that have guns,” Rinke said. “We'll have folks that are familiar with guns and comfortable with them.”

Ralph Rebandt, a longtime pastor at Oakland Hills Community Church in Farmington Hills, said he’d put gun-sniffing dogs into Michigan schools and require buildings to have a single-point of entry, an idea some experts have dismissed as unrealistic.

Tudor Dixon of Norton Shores, a conservative media personality and businesswoman who has worked in the steel industry, said Michigan needs to “harden” schools, which she said are “soft targets” for gunmen.

The winner of the Aug. 2 GOP primary will take on incumbent Gov. Gretchen Whitmer, a first-term Democrat who is seeking re-election.

In a Wednesday interview at the policy conference, Whitmer told Bridge MIchigan she is optimistic she can find “common ground” with the Republican-led Legislature this year on ways to improve school safety.

“Something is going to happen,” Whitmer told Bridge. “I’m confident of it.”

Whitmer has personally backed several gun reform proposals that remain longshots in the GOP-led Legislature, including safe storage gun bills that  she said “make sense to the vast majority of people.”

In Texas, police did not kill the gunman until more than an hour after he first arrived at Robb Elementary School, according to reports. Videos taken outside the school during the shooting showed parents begging police to respond.

But “roaming hall monitors” armed with guns would “respond much quicker than police, who need to drive up, assess the situation, determine what the situation is and then enter the building,” Rinke told Bridge after the debate.

He contended that “red flag” laws — which would allow a judge to authorize law enforcement to seize guns from people who pose risks to themselves or others — and safe storage laws are “against the Constitution.”

“If you buy a handgun for self defense, and it is a law to lock that gun up, how are you going to defend yourself? You make law-abiding citizens break the law to accomplish the task that they bought the gun for,” Rinke told Bridge.

Thursday’s debate gave voters a first-look at the new GOP field, which thinned significantly in the past week after polling leader James Craig, big spender Perry Johnson and three others were kicked off the ballot amid a signature forgery scandal, a decision several are now appealing to the Michigan Supreme Court.

Another candidate who qualified for the primary — Allendale Township real estate agent Ryan Kelley — boycotted the outdoor debate because of the conference’s COVID-19 vaccine or testing requirement for indoor events.

In a poll conducted for the Detroit Regional Chamber, Czuba’s firm found 69 percent of Michigan voters think the nation is on the "wrong track" and 50 percent believe the state is on the wrong track, with inflation ranking as the top concern.

But the poll also included good news for Whitmer: Democratic voter motivation has reached "extraordinary levels,” Czuba said, attributing the spike to expectations that the U.S. Supreme Court this month will overturn Roe v. Wade, the decision that made abortion access a national right.

"The discussion over Roe has provided a jolt of motivation, particularly to Democratic women," he said. "I'm surprised they aren't lined up to vote already."

In Thursday’s debate, Republican candidates reiterated their support for a 1931 Michigan law that would ban abortion in the state if Roe is overturned. Whitmer has asked the Michigan Supreme Court to invalidate the law.

Dixon, endorsed earlier Thursday by the anti-abortion Right to Life of Michigan, touted her relationship with former President Donald Trump, who has not yet endorsed in the gubernatorial contest.

"I have sat down with President Trump several times and we have talked about his focus on Michigan,” Dixon said. “He's watching it closely, I know that for a fact... I think he will likely get into this race, but we'll see what he does."

They also criticized Whitmer's progress to “fix the damn roads,” as promised in her 2018 campaign, but offered few concrete ideas of their own.

Whitmer and the Republican-led Legislature should not spend the state’s nearly $9 billion surplus in an election year because it is “too tempting to buy votes right now,” Dixon said, suggesting the only thing she’d want to spend additional COVID money on now is improving school safety over the summer.

"Is this an inflated budget or is this buying votes?" Dixon said of Whitmer’s $74.1 billion state budget recommendation for 2023, which includes tax cut proposals to expand the Earned Income Tax Credit and increase exemptions for seniors.

Whitmer has vetoed larger tax cut legislation from the Republican-led Legislature but has proposed using some of the state’s surplus to send $500 tax rebate checks to “working families” across the state.

Rinke used the debate to tout his plan to completely eliminate Michigan’s 4.25 percent income tax, which would reduce state revenue by an estimated $12 billion per year.

He’s proposed giving the Legislature a year to figure out any spending cuts that may be required as a result.

Soldano has questioned Rinke’s income tax-elimination plan but said Thursday he too would be “cutting the budget every single year” when he is in office.

His No. 1 target for potential cuts: public universities. They are partially funded by the state, as required by the Michigan Constitution, but Soldano said they should be “raising privately” instead.

"With all this COVID spending relief money that's coming in, it's almost comical that we're almost trying to bail out the state of Michigan with this governor and what she's done the past few years,” he added.

Rebandt went a step further, saying he wanted to eliminate the state’s “general budget.” He didn’t elaborate, but the state’s $12 billion general fund pays for prisons, state police and a host of other services. 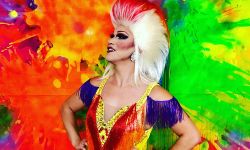