State of Michigan not releasing details of kids' coronavirus deaths 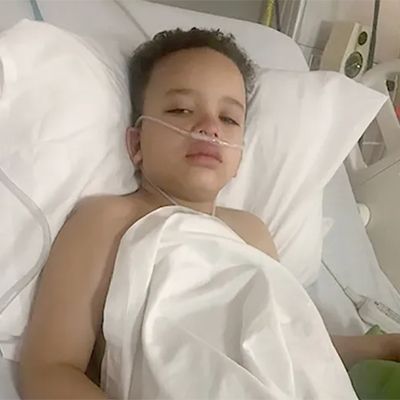 Michigan is among eight states nationally that have not released details about the number of children who've died from novel coronavirus since the pandemic began.

The state Department of Health and Human Services told the Free Press on Tuesday that "fewer than five" children have died of COVID-19 or its complications so far this year, but it would not disclose specifically how many kids have died or provide any other details.

The MDHHS also would not tell the Free Press specifically how many children in the state have died of Multisystem Inflammatory Syndrome-Children, the rare and serious post-infection disease associated with COVID-19. It would say only that "fewer than five" have died with that condition, noting that total pediatric COVID-19 deaths and deaths from MIS-C may overlap.

"We suppress information in order to protect the privacy of individuals who can be more readily identified in a smaller cell when information such as the age can be used along with other publicly available information to identify someone," said Bob Wheaton, a spokesperson for the MDHHS.

Privacy concerns have not stopped other states with similar populations from reporting pediatric COVID-19 deaths. Georgia, for example, has 2.5 million children, and reported 28,717 COVID-19 infections and six deaths from novel coronavirus among children, according to a state-by-state report on children and COVID-19 published by the American Academy of Pediatrics, which details cases, hospitalizations and deaths.

Comparatively, there are 2.4 million children in Michigan ages birth to 19. Of them, 16,042 have had confirmed or probable cases of COVID-19.

"I have been puzzled with why certain states are being reticent to share data," said Dr. Sean O'Leary, vice chair of the Committee on Infectious Diseases for the American Academy of Pediatrics.

The AAP report for Oct. 1 shows a 13% rise in COVID-19 cases among children nationally — as schools reopen and U.S. case counts overall continue to climb. Since school resumed this fall, the state has logged 88 outbreaks in schools that were responsible for almost 4,200 cases of COVID-19.

"There should be transparency around what we know everywhere," said O'Leary, who also is a pediatric infectious disease specialist and professor of pediatrics at the University of Colorado Anschutz Medical Campus and Children's Hospital Colorado.

"We really need to understand what's going on. ... It does surprise me that they're not being more forthcoming with with those data."

Early in the pandemic, many people wrongly believed that children were not seriously affected by novel coronavirus. But, he said, it's evident now that isn't the case.

"We're still learning about the risk to kids," O'Leary said. "I I think the thing that is obviously clear at this point is that it's less severe in in kids. ... Once you get beyond that, we're still kind of trying to understand how high is the risk."

The AAP has reported 112 deaths among children as of Oct. 1. But that number doesn't include deaths in the states that didn't report data.

"In an average flu year with influenza, we roughly have 100 to 200 reported deaths in children," O'Leary said. "We think of influenza as a potentially severe infection in children. ... Most kids do well, but a lot do get hospitalized. I think of COVID in the same ballpark for children in terms of risk, overall risk, as similar to influenza at this point. But I think we need more data to really better understand that for sure.

"The risk of MIS-C that's also still being worked out. At this point, it is a rare condition under any circumstance, by any measure. But you know that the absolute risk if you get infected is still not entirely clear."

So far, only two Michigan children — a 5-year-old girl and 2-month-old boy — are known to have died of the virus. Their deaths were announced at news conferences and later were identified as Skylar Hebert of Detroit, who developed meningitis and died in April, and Hudson Cowboy King of Gladstone in the Upper Peninsula.

A medical examiner's death report suggests Hudson had a birth defect called gastroschisis and necrotizing enterocolitis along with COVID-19 when he died in September. His mother has disputed on social media that his death was due to novel coronavirus.

Hudson's case sparked controversy over how COVID-19 deaths are classified.

Wheaton explained that MDHSS follows national standards and considers a death to be associated with COVID-19 if "the death is due to natural causes, there is a positive COVID-19 test, and one of the following is true:

MIS-C cases can be included among overall pediatric COVID-19 deaths, he said.

In the last few months, far fewer kids have been admitted at Children's Hospital of Michigan with symptoms of MIS-C, said Dr. Rudolph Valentini, a pediatric nephrologist at Children’s Hospital and the Detroit Medical Center’s group chief medical officer.

The disease can cause inflammation of several organs, including the heart, lungs, kidneys, brain, skin, eyes, and gastrointestinal organs. Children with MIS-C may have symptoms such as fever, abdominal pain, vomiting, diarrhea, neck pain, rash, bloodshot eyes, or exhaustion, according to the CDC.

Valentini estimates doctors at Children's have treated more than 40 cases. Of them, only about five have been hospitalized since the end of June.

"The ones that we're seeing now are far fewer in number ... and the severity of illness is less than what we saw previously," he said. "Early on, we saw patients who presented ... with significant inflammation of the heart muscle. And it led to what we call myocarditis, and low blood pressure. Children often needed to go to the ICU (intensive care unit) and get IV medicines to increase the blood pressure. Sometimes, patients were put on a ventilator.

"And a couple of patients ... required heart-lung bypass, which is called ECMO. We haven't needed that anytime recently."

He suspected the reason is because Michigan has contained the spread of COVID-19 in the last few months. Fewer infections overall mean fewer cases in kids.

"We also alerted the community of the risks," Valentini said. "Early on, the original message was that kids were fine. It was not going to be a big risk to them, and then we saw MIS-C. That gave us a new evidence that children were not immune to COVID-19, and they were not going to escape all of the morbidity from the infection.

"We raised the level of awareness in the pediatrician community as well as with parents, and so perhaps kids are getting seen sooner, too. We definitely are not seeing the severity like we were getting."

The U.S. Centers for Disease Control and Prevention reports that there were 1,027 confirmed cases of MIS-C nationally as of Oct. 1, and 20 deaths.

Most cases have been in children ages 1-14, although young adults up to age 20 have developed the condition. More than 70% of reported cases have been in those who are Hispanic, Latino or Black. Of them, 98% of children tested positive for SARS CoV-2, the virus that causes COVID-19. The remaining 2% reported close contact with a person who had COVID-19.

But even getting a definitive number of MIS-C cases in Michigan isn't simple. MDHHS reported that as of Sept 23, there were 54 cases under investigation. Of them, 26 cases had been confirmed and reported to the U.S. Centers for Disease Control and Prevention.

Wheaton acknowledged it might be an under-representation of the true number of cases in children in Michigan, and said the classification of a MIS-C case is complex.

"The evaluation of these cases is a collaborative process. In complicated cases, CDC subject matter experts’ input is requested and taken into consideration," he said.

"Difficulties in access to COVID-19 testing could contribute to an undercount of the true number of MIS-C cases in Michigan. We do not, unfortunately, have the available data to quantify the effect this could have on the total number of MIS-C cases, but we recognize the potential impact on our surveillance efforts."

Valentini said that as more children are exposed to COVID-19 at school and in the community, there is a risk that MIS-C case counts will rise again.

"We are we keeping our eyes and ears wide open," Valentini said. "There's a chance that we will see what we keep calling a second wave. And if we see a second wave what we find is it is a lagging indicator.

"We saw that the big kind of tsunami of COVID infections were happening in March and early April yet we didn't see MIS-C until the end of April, May and early June, and it started to tail off at the end of June.

"So it comes later because it seems to be like a post-infectious phenomenon that happens after the infection."

If there is a resurgence of MIS-C in Michigan, Valentini said doctors will apply what they learned from the first wave to offer better, more informed treatment to kids.

"We have to respect this entity greatly," Valentini said.

"What we learned very early was because the heart involvement could be very severe, we couldn't give them a standard fluid bolus when we suspected they could have MIS-C ... because their heart wasn't working as well. So we learned to be very cautious with fluid administration.

"We realized that we needed to run a panel of labs early on to triage if the patient needed to go to the ICU early. We would much rather put the patient in the safest environment possible first, rather than put them on a standard floor and watch them kind of take a step backwards and get into trouble.

"So, our emergency room doctors, our infectious disease doctors, our cardiologists, intensivists worked hand in glove to get so that we could risk stratify these patients and get them in the right place early and recognize the level of support they would need."

O'Leary said it's vital that people understand that though it's less common, kids are susceptible to severe illness and death from COVID-19.

"Some people still have this misconception that kids aren't affected at all," he said, "and that is absolutely wrong. Kids absolutely can be severely affected by COVID-19 and we need to do everything we can to protect the entire population from getting this infection, including kids."

Kate Wells from Michigan Radio contributed to this report.  Contact her at katwells@umich.edu.