If you have a television and live in Michigan, then you’ve almost certainly seen campaign ads about health care — and are likely tired of them.

Democrats (like Peters) accuse Republicans (like James) of jeopardizing protections for 4.1 million Michiganders with pre-existing conditions by advocating for the repeal of the Affordable Care Act.

This election season, Bridge Michigan has seen so many of the ads, framed in such familiar ways, that fact-checking each political advertisement would be redundant.

Instead, Bridge is laying out the facts in one place, compiling a list of where each of the candidates in key federal races across the state stand on health care, how they have voted while they have held office, and what they plan to do if they are in office in 2021.

Here’s what you need to know about the health care debate.

The Affordable Care Act, or “Obamacare,” was approved in 2010. It expanded Medicaid, gave  subsidies to those within 400 percent of the federal poverty level, made it illegal for health insurance providers to discriminate against people with pre-existing conditions, banned lifetime caps on health insurance coverage and allowed those under 26 to remain on their parents’  plans. It also instituted an individual mandate that made those without health insurance pay a tax penalty.

Within the first five years, 1.2 million Michiganders gained health care access due to the ACA, which lowered the state’s uninsured rate by 53 percent. The law was funded by the individual mandate, and a 3.8 percent tax increase on investment income for households with over $250,000 in income, and individuals with over $200,000 in income.

The individual mandate was repealed in 2017, but a repeal of the rest of the law failed. The ACA is the only U.S. law that protects citizens with pre-existing conditions.

The American Health Care Act was Republicans’ failed effort to replace the ACA. Introduced in 2017, it would have repealed the Medicaid expansion, drastically cut spending and eligibility, eliminated tax credits for health care costs and abolished taxes for higher earners.

But the bill would have kept popular provisions of the ACA, such as the bans on denying coverage to those with pre-existing conditions and lifetime coverage caps, and the rule allowing children to stay on parents’ plans until 26.

A Public Option is a plan favored by many Democrats including presidential nominee Joe Biden that would keep the ACA and allow people to buy government-controlled health plans to compete with private plans.

Different plans come with different levels of coverage and different ways to pay for them, but Biden’s plan will cover an estimated 97 percent of Americans while raising taxes on Americans with an income of $400,000 or more.

Medicare for All is a plan favored by liberal Democrats that would abolish the private health care market and offer universal coverage for all Americans. It would cost some $3 trillion per year, require a significant tax increase (likely on high-income earners and on capital gains tax) but would provide universal coverage with no cost to consumers.

Abolishing the private health care market may cause massive job losses, though some studies dispute that point.

The sprawling district includes much of the northern Lower Peninsula and entire Upper Peninsula. It has been represented by Republicans since 2011, and was represented by the Democratic party for the 78 years before then.

Covers much of western Michigan, including Lake, Muskegon, Newaygo, Oceana, and Ottawa counties and areas of Allegan, Kent, and Mason counties. Held by Republicans since 1967.

Covers Ionia, Barry, and Calhoun counties and portions of Kent and Montcalm counties, including the city of Grand Rapids. It is represented by Justin Amash, a former Republican turned Libertarian who is not seeking re-election.

John Moolenaar, Republican, in office since 2015

Covers the eastern Lower Peninsula, including Arenac, Bay, Genesee, and Iosco counties and parts of Saginaw and Tuscola counties. Democrats controlled the seat since 1993.

Dan Kildee, Democrat, in office since 2013

Covers southwest Michigan, including Van Buren, Kalamazoo, St. Joseph, Cass, and Berrien counties and a part of Allegan County. The seat has been held by Republicans for more than 30 years.

Fred Upton, Republican, in office since 1987

Tim Walberg, Republican, in office since 2011

Covers  central and eastern Michigan, including Livingston, Ingham and parts of Oakland counties. Republicans had controlled the district from 2001 to 2019.

Elissa Slotkin, Democrat, in office since 2019

Covers parts of Oakland and Macomb counties. It has been represented by Democrats for 21 of the past 27 years.

Andy Levin, Democrat, in office since 2019

Covers Michigan’s Thumb, including Huron, Lapeer, Sanilac, and St. Clair and parts of Macomb and Tuscola counties. Republicans have controlled the district since 2003. Incumbent Republican Paul Mitchell is not seeking re-election.

Coves suburban Detroit, including parts of Oakland and Wayne counties. It had been represented by Republicans for six years before 2019.

Haley Stevens, Democrat, in office since 2019

Coves Detroit’s western suburbs, including parts of Wayne and Washtenaw counties. It has been a Democratic district for decades.

Debbie Dingell, Democrat, in office since 2015

Covers parts of Wayne County, including much of Detroit and western suburbs.  It has been represented by Democrats since 1949.

Rashida Tlaib, Democrat, in office since 2019

Covers parts of Wayne and Oakland counties, including parts of  Detroit and northern suburbs up to Pontiac. It has been represented by Democrats since 1949.

Brenda Lawrence, Democrat, in office since 2015

Patrick pledged to Campaign for Liberty that he would work to repeal the ACA and reduce government involvement in healthcare. Patrick reiterated the pledge to Bridge on Oct. 21. 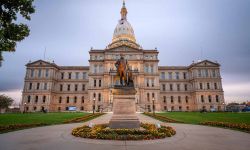