Gov. Gretchen Whitmer’s administration is blocking the payout of a $10 million grant that would aid the development of vacant land tied to a well-connected Michigan Republican.

Kurt Weiss, a spokesman for the Department of Technology, Management and Budget, told Bridge Magazine on Tuesday that the payment is being withheld following multiple articles in Bridge that showed the grant –   approved on the last day of lame duck with no debate among legislators –  would help spur commercial and residential development on land owned by a company headed by Bobby Schostak, the former chairman of the Michigan Republican Party.

The decision comes just over a week after Whitmer herself had railed against the pork in the spending plan but said she couldn’t stop the grants because they passed a legal review.

Weiss said the state initiated a review after Whitmer’s executive team raised questions about the grants and whether the money, totalling $113 million, was “the wisest use of taxpayers dollars.”

“That project probably rose to the top of that list” of questionable grants, Weiss said.

It’s unclear how long the review will take, Weiss said.

The Schostak company wants to develop 800 homes as well as commercial development on the more than 560 acres it has acquired at a cost of more than $28 million.

Without the utility lines, the land cannot support those plans.

The total cost of bringing water and sewer to the area is at least $30 million; the Legislature awarded another $10 million grant in 2017, also as a last minute add to a huge spending bill.

The state Attorney General’s office has told DTMB that the grants, approved as part of a $1.3 billion spending bill, are legal and should be funded, Weiss said, unless there are problems.

That prompted members of Whitmer’s executive staff to call for an additional review and led to the delay on the Salem Township grant, the largest of all grants, and two others, Weiss said.

The grant is intended to go to Salem Township to bring the utility lines to property near the intersection of M-14 and Gotfredson Road in eastern Washtenaw Township.

But the actual wording of the grant in the law, Weiss said, is open to a broad interpretation. It calls for spending the money “to encourage economic development and future growth” in a small portion of the township.

There is no mention of water and sewer lines, with the language vague enough to suggest the township could spend the money on other things, Weiss said. He said the department is intending to reach out to the township to let it know “that they have options.”

Gary Whittaker, the township supervisor, has told Bridge that the township has not sought the grants and that it has long anticipated that developers would bear the cost of installing utility lines.

In 2009, the Schostak company asked the township to ask the federal government to fund the project; the township declined.

That decision added to the contentious relationship between the township and Schostak Brothers & Co., Inc., with the Schostak company taking legal action against the township. Whittaker has said the township would probably use the money for the utilities out of fear of being embroiled in more legal action.

Whittaker said Tuesday he has not talked with the state about the grant and is unsure what else the township could spend the money upon. Schostak did not responed to a request for comment but he has defended the project and the use of tax dollars. He said the state’s money will lead to an economic boon in the region. 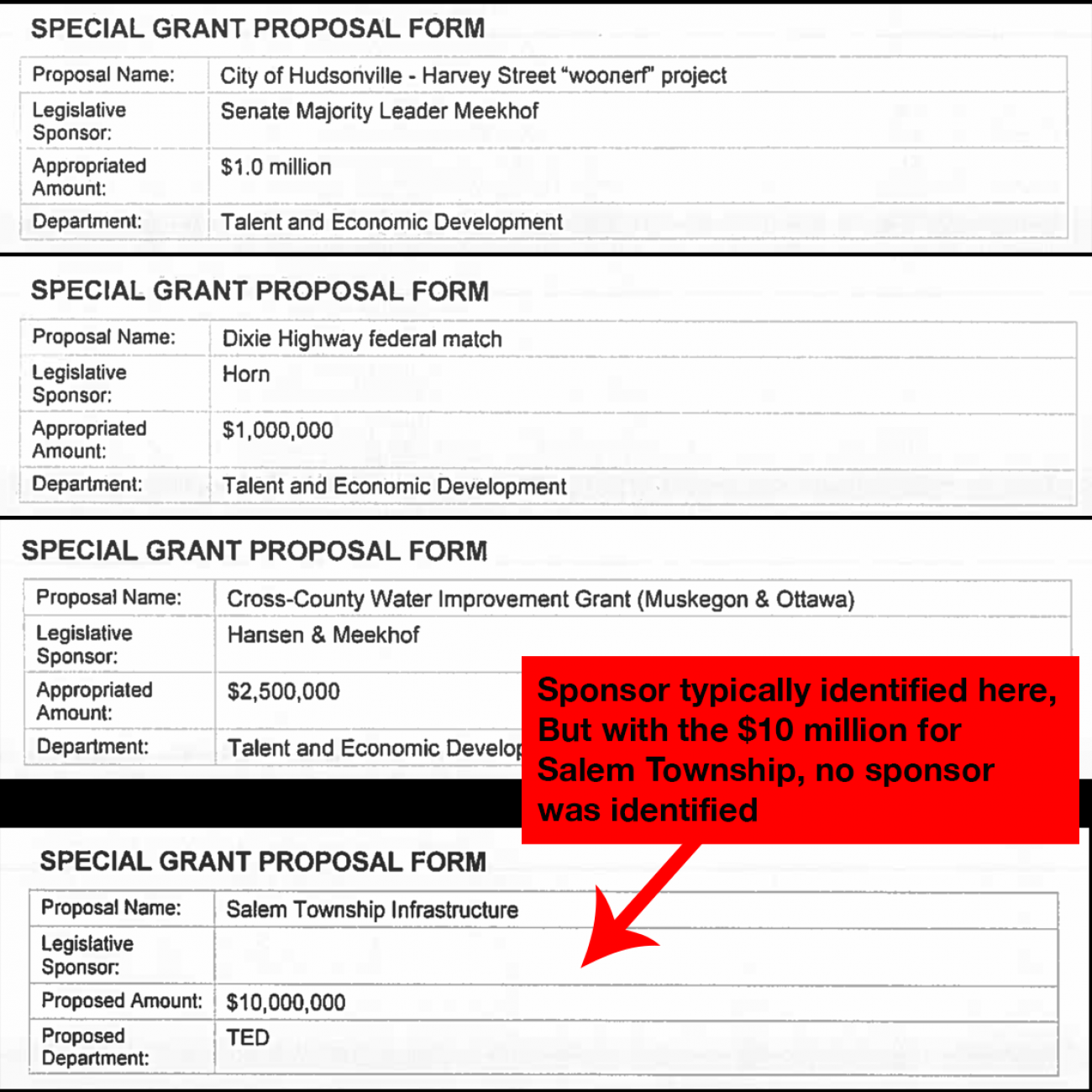 The grant was one of the few approved that didn’t have a sponsor, Bridge reported. Most of the grants were championed by local legislators but the Salem Township one had no advocate.

It was a relative orphan until Arlan Meekhof, the former senate majority leader, told the media he had pushed for the grant.

He said the money would spur economic development –  even though the project is over 150 miles away from his own district.

The vast majority of the grants approved in lame duck funded community projects such as fixes to an armory in Owosso, bridge repairs in Alpena, money for school safety in Van Buren County and parks in Inkster and Rochester Hills.

The money for Salem Township differed in that it would directly benefit a private developer – and because local elected officials didn’t request the money.

State Rep. Donna Lasinski, D-Scio Township, represents Salem Township and she did not know about the grant request. She said she’s upset her peers approved it, saying it has the state subsidizing “a for-profit developer and prefers them over other developers.”