Michigan Health Watch
After a hellish year in Michigan: joy from giving doses of COVID vaccines

For much of last year, Michigan’s nurses and other frontline workers were sometimes called names, cursed at, or lied to.

They scrambled to fill staff shortages, track down masks or other supplies, and, in some cases, as the virus tore through their communities, found there was precious little they could do for thousands of the sick and dying.

Then, finally, vaccines arrived. And nearly one year after the virus was first confirmed in Michigan, these same health workers are finding their days filled with an entirely different emotion:

It arrives in less than a milliliter, appointment after appointment, syringe after syringe. People are “just giddy, ready to be vaccinated,” said Sue Leeson, who oversees the communicable diseases program at the Central Michigan District Health Department in Isabella County.

That happiness is proving contagious.

Mary Wisinski, a nurse for 43 years in Kent County, gathered with colleagues at the health department last week as they handed three balloons and blue foam crown to Shelley Grissom, a Grand Rapids grandmother. Staff applauded. A camera rolled. 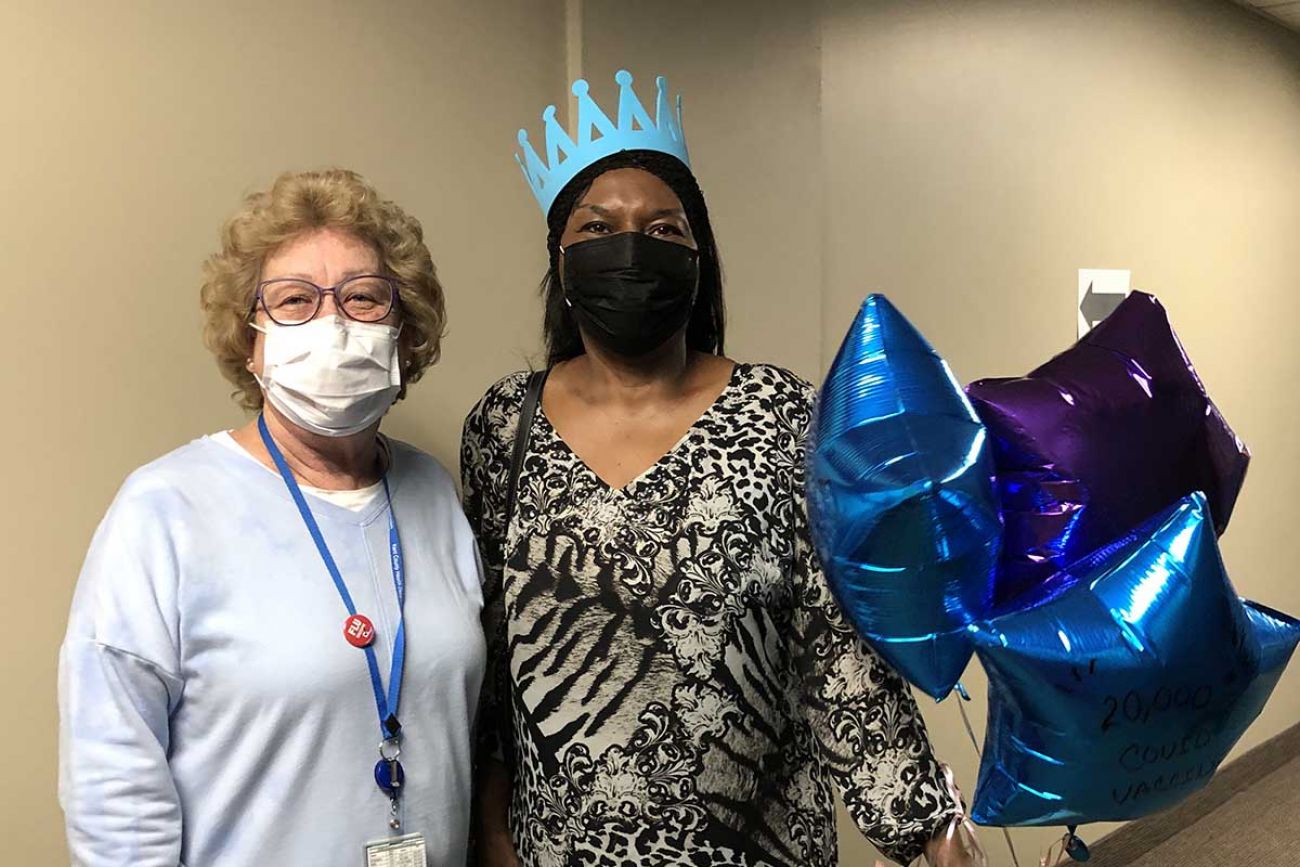 She laughed: “I’m very excited about getting the vaccine. I’ve been waiting forever for it. I’ve … called around and made everybody crazy asking ‘When am I going to get my shot?’”

“People had tears in their eyes,” Wisinski said of that moment. “It was just so inspiring … I could barely restrain myself from crying.”

What a difference a couple months can make.

The stress from a pandemic that remains far from finished overwhelmed public health workers last year. Public health workers routinely faced abuse as they conducted contact tracing to try and slow infection. They grew to recognize quickly — by the tone of the voice on the other end of their calls — whether they would find cooperation or cursing.

One worker was accused of working for Satan. When the worker’s health department in the Upper Peninsula tried to warn men of COVID exposure following a church retreat, it received little cooperation.

Tears and balloons for some workers. Hand-written cards. Happy chatter.

Jessica Andrade, a medical assistant, sees the relief and gratitude in the people she gives vaccines to at Community Health and Social Services, or CHASS, a Detroit health clinic.

“They’ll say the needle on the TV looks so big,” Andrade said. “But then after I’m done, they’ll say ‘Are you sure you gave it to me?’”

For many receiving vaccines, there’s joy in the simple act of traveling to a COVID vaccine site.

“They haven’t left their homes in nearly a year,” Andrade said. “It can be very emotional. They hope this (vaccine) gets them back to routine.”

Isabella County’s Leeson sees these glimmers of optimism, too.

“You can kind of see an end point,” she said, “like hopefully we'll get back to some sort of normal in the next six to eight months, and I think that's the hope of the people that you vaccinate as well.”

Wisinski, the nurse, received Kent County’s first vaccine back on Dec. 18. Two months later, she was present for another milestone. After sorting through the day’s vaccination schedule, someone grabbed a Sharpie, reached for the balloons that would be handed to Grissom and wrote: “20,000th COVID vaccine.”

In January, Kent County nurses wearing scrubs and masks carried their specialized blue transport tote with vaccines into Olivia’s Gifts, a home for residents with developmental disabilities. The residents wore special t-shirts, including one that read “Science will win.”

Before they left, and again when they returned with second doses weeks later, the nurses received home-made cards of colorful scribbles with the words “thank you.” Residents signed them with their fingerprints stamped in bright ink.

Residents at the home, many with high medical needs, hadn’t been able to leave the facility for recreation in nearly a year, Greendyk said. Family members were banned in all but extraordinary cases.

Now, some families are visiting again. Staff are making plans for the younger residents to return to school.

“It just feels like all good things,” she said, “thanks to the vaccine.”

Last spring, Eric Scott and his colleagues at the Detroit Medical Center took the brunt of COVID as it slammed into southeast Michigan. 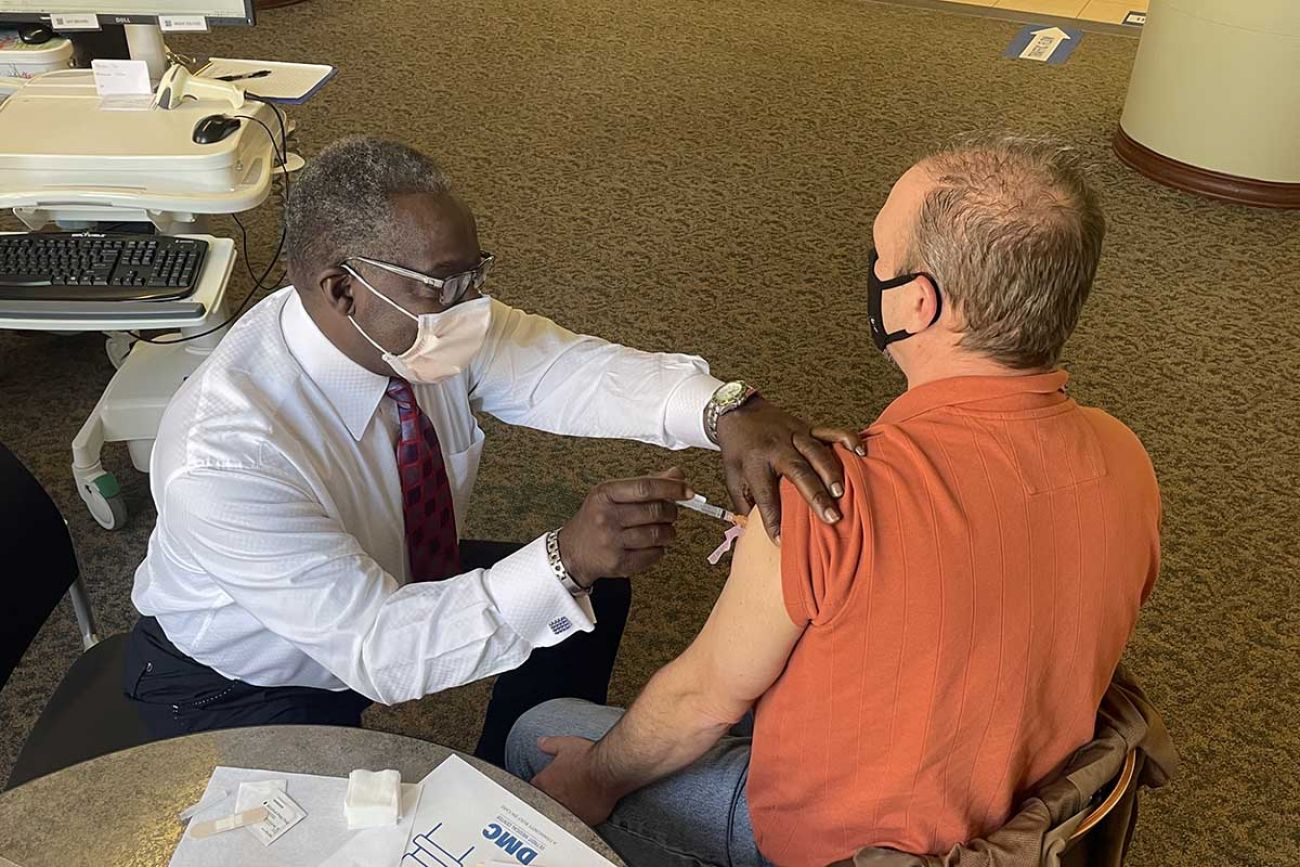 As a clinical nurse manager, Scott had to manage a staff dwindling by fear and their own COVID infections, as sick and dying patients overwhelmed the region’s hospitals.

“The work was so stressful because we didn't know anything (about COVID) and we were developing processes on the fly,” he said.

He got used to a few hours of fitful sleep each night, the 63-year-old said Friday.

He’s still working through staff shortages, he said. And he and others are quick to note that COVID is far from over. As of Friday, 15,545 Michigan deaths had been linked to COVID, and 727 people were hospitalized across the state.

But daily conversations now also include, “Congratulations!,” said Scott, whose main task these days has turned to vaccinating staff and the public.

He says it to everyone he vaccinates.

“To me,” he said, “congratulations now means ‘you're one step closer to not being sick and ill from coronavirus.’”