DETROIT—Detroit officials took steps this week to quell the flood of water shutoffs, as the controversy has become an issue in the Democratic presidential campaign.

On Wednesday, board members of the Detroit Water and Sewerage Department voted to ask a regional authority to double the amount of aid available to residents to avoid shutoffs.

The action came two days after Bridge Magazine reported that city shutoffs last year jumped 44 percent to 23,473. As of Jan. 15 of this year, 37 percent of homes in the City of Detroit, about 9,500, that were shut off in 2019 still didn’t have service.

The board’s vote, which still needs to be finalized this month by the Great Lakes Water Authority, came about four hours after Democratic frontrunner Bernie Sanders condemned the city’s shutoffs.

“Detroiters are having their water shut off because they can’t afford outrageous water bills,” Sanders tweeted, linking to Bridge’s article.

“Meanwhile, Nestle gets to bottle unlimited amounts of water for a few hundred bucks a year. That is a moral outrage. Clean water must be a human right."

Detroiters are having their water shut off because they can’t afford outrageous water bills. Meanwhile, Nestle gets to bottle unlimited amounts of water for a few hundred bucks a year. That is a moral outrage. Clean water must be a human right. https://t.co/QhVXiNwaSa

The tweet referred to Michigan’s decision in 2018 to allow Nestlé Waters North America, to pump 1.1 million gallons of water from private wells in Michigan for a $200 annual fee to the state (plus the cost of water to municipalities) to sell as its Ice Mountain brand.

Before Wednesday’s water meeting, Detroit officials pointed out to Bridge — correctly — that the state’s decision on Nestlé had nothing to do with the city’s ongoing payment collections-campaign that has shut service to 141,000 accounts since 2014.

The statement from the Vermont senator, though, comes as Detroit water officials are increasingly defensive about the shutoffs.

The City Council also is considering asking Gov. Gretchen Whitmer to declare a public health crisis emergency and stop shutoffs for needy residents. That’s based largely on a fear that shutoffs increase water-borne illnesses, as one study suggested they might.

“Do shutoffs in Detroit increase disease?” Gary Brown, director of the water department, asked the council this week.

“I say ‘No. They don’t whatsoever.’ So I think it’s short-sighted to be asking for that drastic of a measure.”

Instead, Brown pointed to his proposal before the Great Lakes Water Authority to increase the amount of assistance to needy Detroit residents to $5 million from $2.4 million for the Water Residential Assistance Program, an income-based program that provides up to $1,000 per household.

It was created when Detroit leased its water system to the suburban authority during the city’s municipal bankruptcy proceedings. The 40-year deal calls for the authority to pay Detroit $50 million per year to help repair the city’s 2,700-mile network of pipes that serves about 4 million customers across much of southeast Michigan.

The proposal, which goes before a GLWA committee this week, would also allocate $10 million in assistance for needy suburban customers, Brown said. The program helped about 17,000 city residents avoid shutoffs in the past few years, Brown said.

“I don’t want anyone to believe this program will solve every issue with poverty, but for a good many people, it could make a huge difference,” he said.

Speaking to water commissioners, Brown noted the shutoffs have improved city water bill collections rates to 95 percent from less than 70 percent, freeing more than $50 million for the aging system.

The shutoffs come as monthly bills have risen astronomically, some 400 percent over the past 20 years to an average of $77 per month.

Unlike other cities, Detroit no longer attaches delinquent water bills to tax liens. Doing so would exacerbate a tax foreclosure crisis that has already caused more than 100,000 homes to revert to government ownership in the past 10 years.

But Bridge reported this week that shutoffs are lasting far longer than initially reported by city officials.

For those whose service was restored last year, the average wait was 29 days, according to city records Bridge obtained through the Freedom of Information Act. Less than 1 percent of shutoffs —  a total of 50 last year — were turned back on in a week or less. 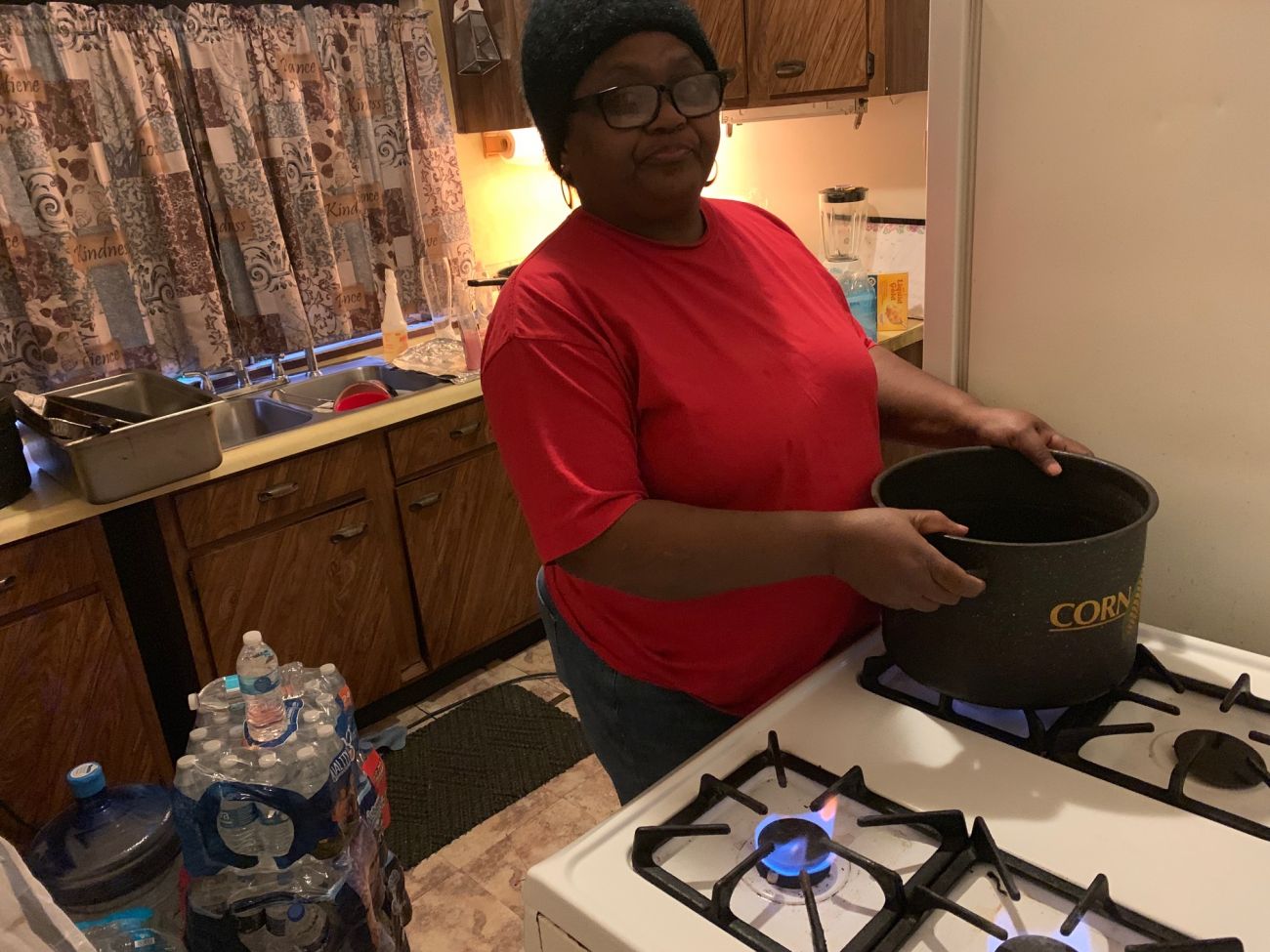 Speaking to water commissioners, Brown addressed Bridge’s findings and a woman featured in the article, Litha Akins. The widow’s water was disconnected in April and she endured a winter without a working furnace by turning on a gas stove and putting blankets on windows.

Brown said city crews restored Akins’ service this week, but her problems go far beyond water. Two-thirds of her $733 monthly income, $500, goes to pay her back taxes to Wayne County.

“This is a poverty issue. A lot of people have let this lady down,” Brown said, listing a litany of issues with her house, including a crumbling roof, flooded basement and broken water meter.

“She needs to be in affordable housing. This is not a safe environment.”

Akins told Bridge on Wednesday she’s grateful for the help. A social services agency this week installed a furnace and water heater, and she is looking forward to taking her first hot bath in months, Akins said.

“God is good and God bless everyone who helped.”