The decision, if upheld, is a major win for thousands of people with severe and long-term injuries from auto accidents, but could have a huge impact on the reform law’s ability to reduce Michigan’s high auto insurance costs.

In the 2-1 ruling, Court of Appeals Judges Douglas Shapiro and Sima Patel found that the 2019 law, which was forged between a Republican Legislature and Democratic Gov. Gretchen Whitmer, did not clearly indicate it was meant to be applied retroactively to past accident victims. Therefore, patients who began receiving care for auto injuries prior to its passage should not be subject to the changes.

Even if the Legislature had spelled out its intent to make the law retroactive, “imposing the new limits would substantially impair no-fault insurance contracts entered into before the amendments’ effective date,” and thus violated the Michigan Constitution’s Contracts Clause, the 15-page majority opinion found.

In dissent, Judge Jane Markey argued that the Legislature “clearly manifested an intent” that the law be applied retroactively and disagreed that retroactive application would violate the contracts provision in the state constitution.

If Thursday’s ruling stands, it could ultimately return more comprehensive care to thousands of Michiganders injured in auto accidents before 2019, although appeals are expected.

“I’ve had so many calls today — people sobbing with joy and relief,” said Maureen Howell, who has a son who was severely injured and has led  protests against the law that overhauled Michigan’s auto no-fault law. It passed after months of tense negotiations between the Whitmer administration and the Republican-majority Legislature in an effort to lower the state’s sky-high insurance costs.

At its core, the legal challenge focused on changes in the 2019 reform that cut the amount home health care providers could charge for reimbursements on services to auto accident survivors not covered under Medicare by 45 percent. That part of the law went into effect last year. It also limited the amount of time for which family members can be reimbursed for attending to the injured person.

Supporters of no-fault reform said the changes were a difficult but necessary compromise to prevent overcharging for auto-related injuries and bring down auto insurance costs.

Erin McDonough, executive director of the Insurance Alliance of Michigan, called Thursday’s ruling a “disappointment” that “threatens to roll back the progress we’ve made and eradicate the savings drivers are experiencing.”

“While today’s court ruling is a setback for drivers, Michiganders have come too far to turn back to the days of unaffordable auto insurance, fraud and rampant medical overcharging,” she said in a statement. “This case will be appealed to the Michigan Supreme Court.”

In addition to placing limits on fee reimbursements for auto accident victims, the law gave Michigan drivers the option to choose their preferred level of coverage instead of mandating unlimited personal injury protection coverage. Those changes would not be affected under the Thursday decision.

But accident victims, their families and providers feared the 2019 overhaul would slash reimbursements too deeply, cutting those who were injured from the coverage they needed to recuperate or even to survive.

For some victims, cuts in reimbursement rates have required them to move from their own homes into nursing homes, said Tom Judd, executive director of the Brighton-based Michigan Brain Injury Provider Council.

A study this month by the Michigan Public Health Institute found at least 4,082 health care worker jobs have been eliminated and 6,857 auto accident patients have been discharged from their care since the policy took effect.

Near Saginaw — two miles from his home — Howell’s son, Sam, had a 3 percent chance of surviving after a snowy car accident in 2005, his mother said.

Then an 18-year-old premed student, his skull had been crushed and his neck broken in three places from the impact of his Geo Prizm with a large tree, the older Howell, a trauma nurse, told Bridge.

Doctors said he would never walk or talk again. But “like a miracle,” Sam Howell graduated in 2019 from Oakland University and is pursuing a career in therapeutic massage, his mother said. 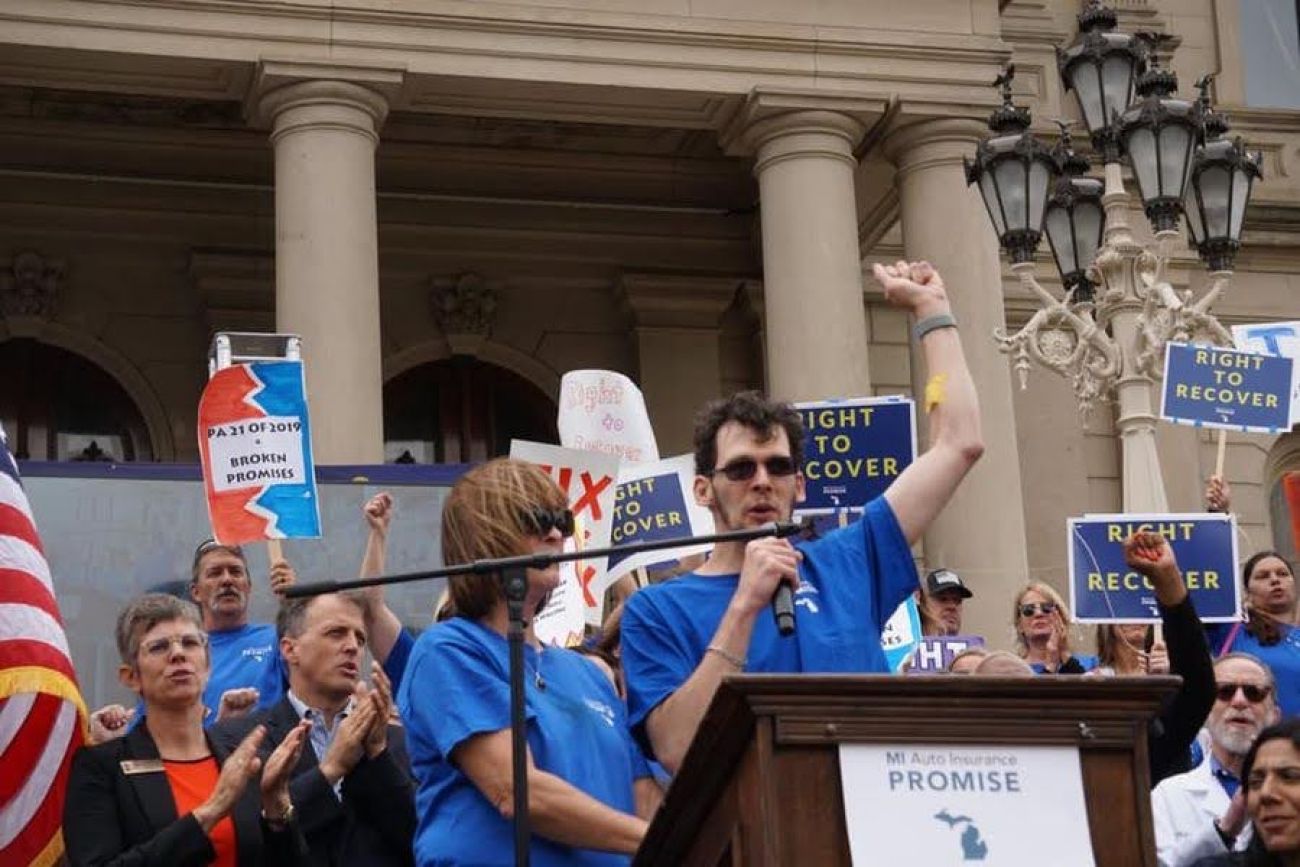 Sam Howell was nearly killed in a 2005 accident, his mother, Maureen said. Now, the two of them protest a 2019 law that limits coverage for Michiganders injured in auto accidents.

“Without auto-no-fault (coverage), none of this would have happened,” Maureen Howell said.

She and others called Thursday’s ruling a “victory” for accident victims who, like Sam, were injured before the law changed in 2019.

It “re energizes” accident victims and their supporters “with some hope,” Judd said.

Earlier this year, Whitmer announced $400-per-vehicle refund checks for insured drivers, citing the 2019 reforms as the reason the Michigan Catastrophic Claims Association could afford to get money back to drivers.

Republicans and Democrats alike have introduced various proposals to tweak the policy, but legislative leadership have rebuffed efforts to dive back in.

The two plaintiffs in the case challenging the law, Ellen Andary and Phillip Krueger, both sustained traumatic brain injuries in auto accidents prior to 2019 and require round-the-clock care. They claim the new limitations don’t apply to them because their policies took effect prior to the law’s enactment.

Their insurance providers argue that regardless of when the injuries happened, they and their providers are subject to the new cost limitations outlined in the 2019 law.

The majority opinion sided with Andary and Krueger, and the case was remanded to the Ingham County Circuit Court for further consideration, although appeals are likely.

If the ruling withstands legal challenges, accident victims “will have adequate care because (their caregivers) will be reimbursed at an adequate rate,” Judd said.

That would be welcome relief to Wes and Cheryl Bush just north of Grand Rapids. The couple said their savings are slowly being whittled away as they struggle to care for their daughter, Angie, after changes to her coverage under the 2019 law.

Angie Bush’s Hyundai sedan had spun out of control on a patch of black ice in Muskegon County in 1985, her parents said.

“Until it's your family, you do not know how that hits you,” Wes Bush, 73, said Thursday about his daughter’s crash.

Angie Bush is now 51, unable to care for herself, even to press a call button to ask for help. But she smiles and continues to be part of the family’s everyday life.

The 2019 law change reduced Angie’s reimbursements for her round-the-clock care to the equivalent of 136 hours a week, 56 of which Cheryl and Wes Bush provide themselves.

The parents are paying their other daughter out-of-pocket to help them out with Angie’s care, even as medical bills from a hospitalization continue to mount.

“Eventually what's going to happen is that my wife and I — and we have had excellent credit — our credit score is gonna go to zero when I have these outstanding bills,” Wes Bush said.

He and others said the case is undoubtedly bound for the state Supreme Court.

“There's still a long way to go,” he said  “But this represents a significant step forward after years of being stonewalled by legislative leadership,” he said. “The courts now have ruled in favor of fairness and decency.”

Judd, who called the ruling a “win for justice,” agreed. “I'm not sure so the immediate problems are solved. There's still a lot of uncertainty. But we’ll take wins where we can get (them) in this fight.”

Meanwhile, Howell said she and others, including her son, Sam, will continue to fight the 2019 reform law, and return Michigan to its previous system.

“This is not just about the people who were injured before,” Howell said. “This is about everyone else in the state. Somewhere in Michigan someone's been catastrophically injured, and they should have the same potential of a miracle.” 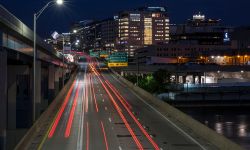