Opposition among some parents to the COVID vaccine may have blossomed into a broader reluctance to get Michigan children inoculated against a host of routine diseases.

Just 68.1 percent of Michigan’s nearly 164,000 toddlers were considered vaccinated in March, compared to 73.8 percent within the age group two years earlier when the pandemic first hit Michigan, according to the Michigan Care Improvement Registry, which tracks state vaccination rates.

That left roughly 52,000 toddlers more vulnerable to vaccine-preventable illnesses that include mumps, measles, chicken pox, polio and diphtheria, based on population estimates in the state’s latest vaccine report card.

Mary Zimmerman, a registered nurse who oversees immunizations for Spectrum Health, the Grand Rapids-based hospital system, is one of several public health experts who said pandemic misinformation has  hardened the public’s distrust of vaccines.

Before COVID, most parents “accepted that ‘these are the vaccines that my children get (and) they're required for school,’” Zimmerman said.

Some of those same parents now are “saying, ‘Wait a minute. Do I really need these vaccines?’ or ‘How are these vaccines made?’” Zimmerman said.

The pushback has prompted at least one one Michigan health department to stop using the V-word in its campaign to get children up-to-date before school begins in the fall.

At the LMAS health department in the Upper Peninsula, a social media post about an “immunization” clinic prompted one resident to accuse the health department of sneaking COVID vaccines in among other routine childhood shots, said Kerry Ott, department spokesperson.

Vaccination opponents have “gained new members because of COVID,” she said.

Ott said “vaccination” is now considered a “trigger word” among those who feel the government overstepped its authority during COVID or who have doubts about vaccines developed to combat the virus.

“I wasn't expecting to be accused of trying to vaccinate people with the COVID vaccine and telling them that it's polio,” Ott said. “There is a solid wall of people that are not going to budge from believing these conspiracy theories, and I have not found a way to even open a conversation with folks on that side (and) behind that line.”

As Bridge Michigan reported back in spring 2020, pediatricians were concerned about children skipping out on regular health checks as their parents avoided health care settings in the early days of the pandemic. Unsurprisingly, childhood vaccine rates tumbled.

But pediatricians and public health staff hoped to catch up immunizations as the pandemic receded, along with serious illness and death.

There was also concern that children from low-income families would suffer even more when vaccine rates dropped. That concern appears justified.

In January, a state report noted that vaccine rates among toddlers covered by Medicaid went down 6.8 percentage points — to a 10-year low of 64.7 percent last October. That rate has remained relatively unchanged since then.

In a way, childhood vaccines may be a victim of their success, said Nick Derusha, health director at the LMAS health department and president of the Michigan Association of Local Public Health, which represents the state’s 45 local health departments.

Because traditional childhood vaccines work, it’s easy for parents to relegate the underlying illnesses to history, skip the doctor’s office, and leave children exposed, he said. The last global case of smallpox, which killed 3-in-10 people infected, was recorded in 1977. Polio has been eliminated from the United States.

“Most of the current parents haven’t seen these diseases, these outbreaks in their lifetimes,” Derusha said.

Zimmerman, of Spectrum Health, said pediatricians and staff now are trying to catch up as many vaccines as possible in a single visit.

Getting multiple shots at once limits the body’s natural immune response — a low-grade fever or fussiness, for example — to a single doctor’s visit, rather than a series of them over several months, she said.

Experts in 10 states told Politico they worry families were “projecting their attitudes toward the Covid-19 vaccine onto shots for measles, chickenpox, meningitis and other diseases,” the news site reported in April.

Michigan has not been exempt from changing attitudes, said Terri Adams, immunization division director at the Michigan Department of Health and Human Services.

“If people are opposed to COVID vaccines, maybe they’re opposing other, more general vaccines that they were not opposed to before,” she told Bridge in February.

Sue Waltman, founder and president of Troy-based Michigan for Vaccine Choice, said she personally rejects vaccines — “I don't want to use drugs as a method of healthcare” — and for years has fought against government vaccine mandates.

She told Bridge she’s not certain how many people have found the Vaccine Choice group since the pandemic began, but its database now has 29,000 names.

Waltman said she frequently meets parents who tell her they are wavering for the first time about routine childhood vaccines because of questions about COVID vaccines. She said they wondered, “What about the rest of these shots? … How good were they or are they?”

India Shiels, 30, of Detroit is not among the doubters, but has seen doubt creep up around her. “It’s the COVID vaccine making people scared,” she contends. 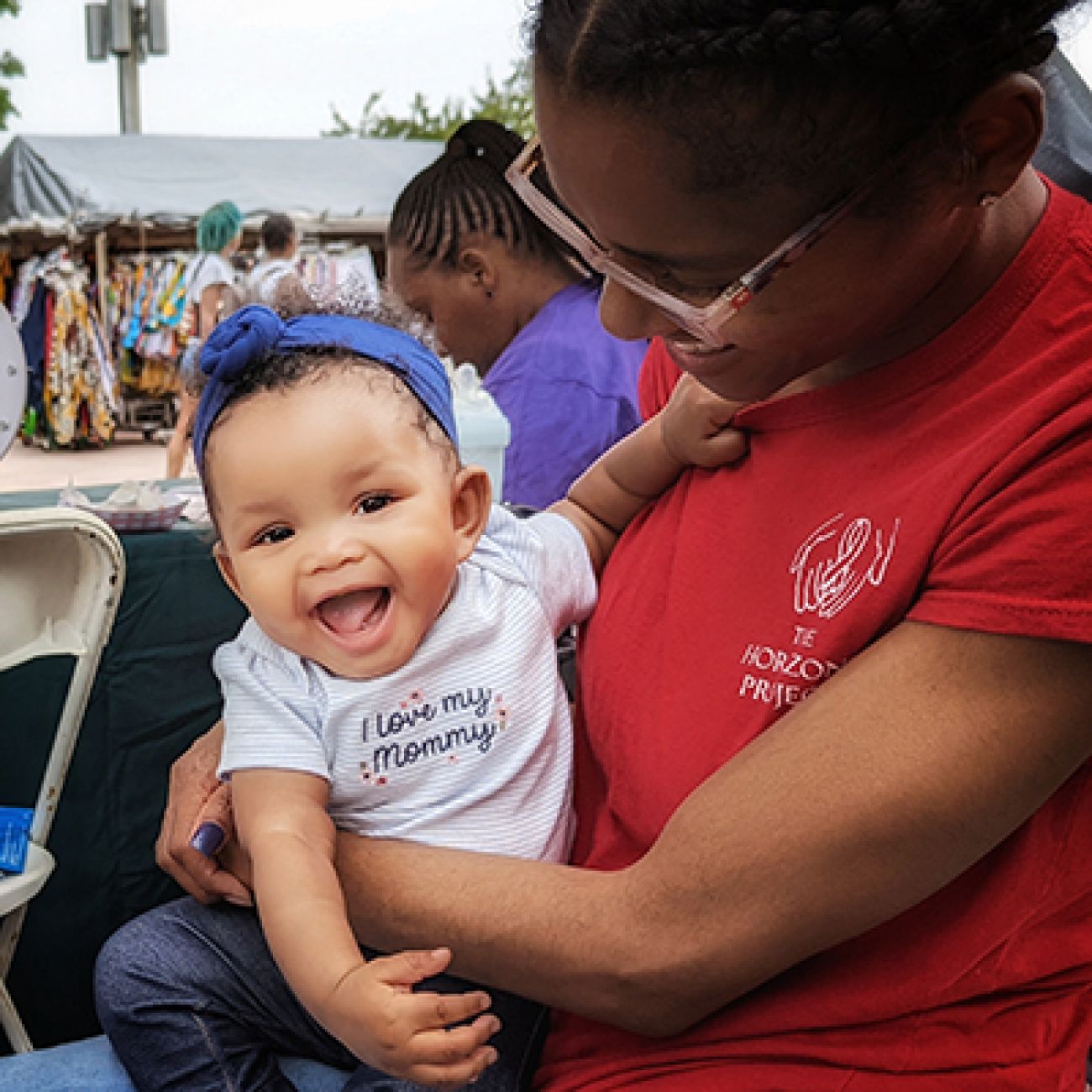 India Shiels, 30, of Detroit, said she had no hesitation her daughter, Marlee, vaccinated against childhood diseases. But other parents are scared off by COVID misinformation. (Bridge photo by Robin Erb.)

Shiels was enjoying a Friday night recently at Hart Plaza in Detroit as her daughter, 8-month-old Marlee, wriggled happily in her lap.

Marlee is fully vaccinated for her age, said Shiels, a case manager at Horizons, an HIV and AIDS prevention and treatment program.

“The vaccines have been around for years,” Shiels said. “I have no hesitation.”

“All along, all we were trying to do is help stop people from getting terribly sick and dying,” Vail said.

“To have your loss of trust be rooted in that — it’s a challenge. How do you recover from that? I don’t know, but we’re going to have to.”