July 13: The Johnson & Johnson vaccine and Guillain Barré syndrome: what to know
April 23 update: FDA ends pause on J & J vaccine for COVID, but with warning to women

Johnson & Johnson’s COVID vaccine is much like the small and fast player on a field full of behemoths: Important not for its size, but for its strategic ability.

And as Michigan pushes toward its goal of vaccinating at least 70 percent of adults against the virus, J & J has proven valuable in protecting some of the toughest-to-reach Michiganders. 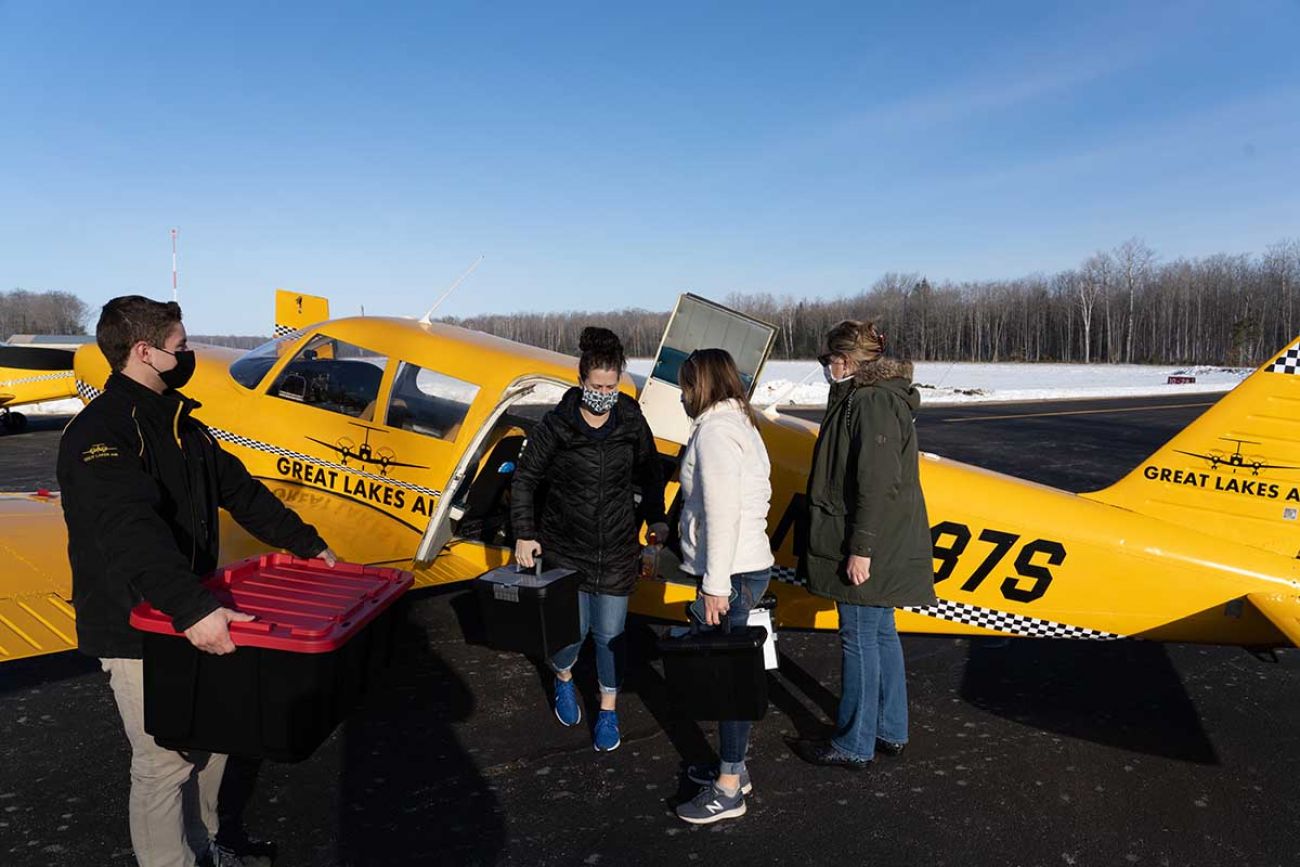 The one-dose Johnson and Johnson vaccine is ideal for remote areas and hard-to-reach Michiganders. (Bridge photo by Dan Welihan)

Even the vaccine-reluctant tended to be reassured by J & J, which offered a single-dose, rather than the two-dose regimen of the other vaccines, said Velma Hendershott, president and CEO of InterCare Community Health Network, which serves southwest Michigan communities, including an estimated 8,000 agricultural workers.

“People wanted to get one dose and be done with it,” she said.

But with Tuesday’s ordered pause of the J & J vaccine, Michigan faces a trickier and potentially longer journey to putting a deadly pandemic behind it.

The state had administered just under 200,000 doses of J & J vaccines, compared with a combined 5.2 million shots of the earlier-approved Pfizer and Moderna versions. That’s a tiny sliver of the vaccine effort — just 3.7 percent of vaccines dispensed in Michigan.

But J & J is the only one of three FDA-authorized vaccines that is a single-dose. And unlike Pfizer and Moderna, which must be kept frozen, J & J doses can be refrigerated for long periods of time, making it easier to store and transport, which is important when traveling to harder-to-reach places.

Rural counties in particular relied on Johnson & Johnson. In the Michigan counties where more than 5 percent of its vaccines were the J & J, all were rural, according to state data.

J & J “turned out to be a good vaccine, and it’s an important player,” said Karen Senkus, a health officer in Chippewa County in the eastern Upper Peninsula, whose office delivers vaccines to island residents as well as lake crews on passing freighters.

At InterCare, text messages among staffers “were going off like crazy” Tuesday morning when news of the halt of the Johnson & Johnson vaccines became known, CEO Hendershott said.

As Bridge Michigan reported earlier Tuesday, the vaccine was temporarily halted after federal authorities reported cases of women developing blood clots in the two weeks after receiving the vaccine. Six reports out of more than 6.8 million doses given in the U.S. are certainly rare, but experts said the decision to nonetheless pause the vaccine shows that health authorities are serious about ensuring the safety of vaccines.

The Center for Disease Control and Prevention’s Advisory Committee on Immunization Practices (ACIP) is expected to meet Wednesday to review the cases. It is not yet clear how long it will take to get guidance on the continued use of the J & J vaccine.

A change in plans

About 30 migrant workers in Van Buren County had appointments Tuesday to be vaccinated with J & J shots. Because job sites change throughout the growing season, it can be difficult to ensure a worker gets a second dose of Pfizer or Moderna before they move on, Hendershott said.

InterCare staff decided to take a chance. They moved forward with the clinic, providing Moderna vaccines instead after talking with the workers’ employer.

They hope the workers will still be here in four weeks — the end of the recommended wait period before a second Moderna dose is given. (There’s a three-week period for Pfizer’s second dose. But with both vaccines, a person may wait up to six weeks, according to CDC guidance.)

“I think they'll still be around,” Hendershott said. “It’s an early crew. While I’m not going to minimize that there are workers that move around, a good portion of people who are working for a particular grower will stay with that grower for a good portion of the season.”

Residents who start with a first dose of one of the two-dose vaccines then move to another area may contact the local health department or vaccine provider in that area for a second dose, said Senkus, the health officer in Chippewa County. 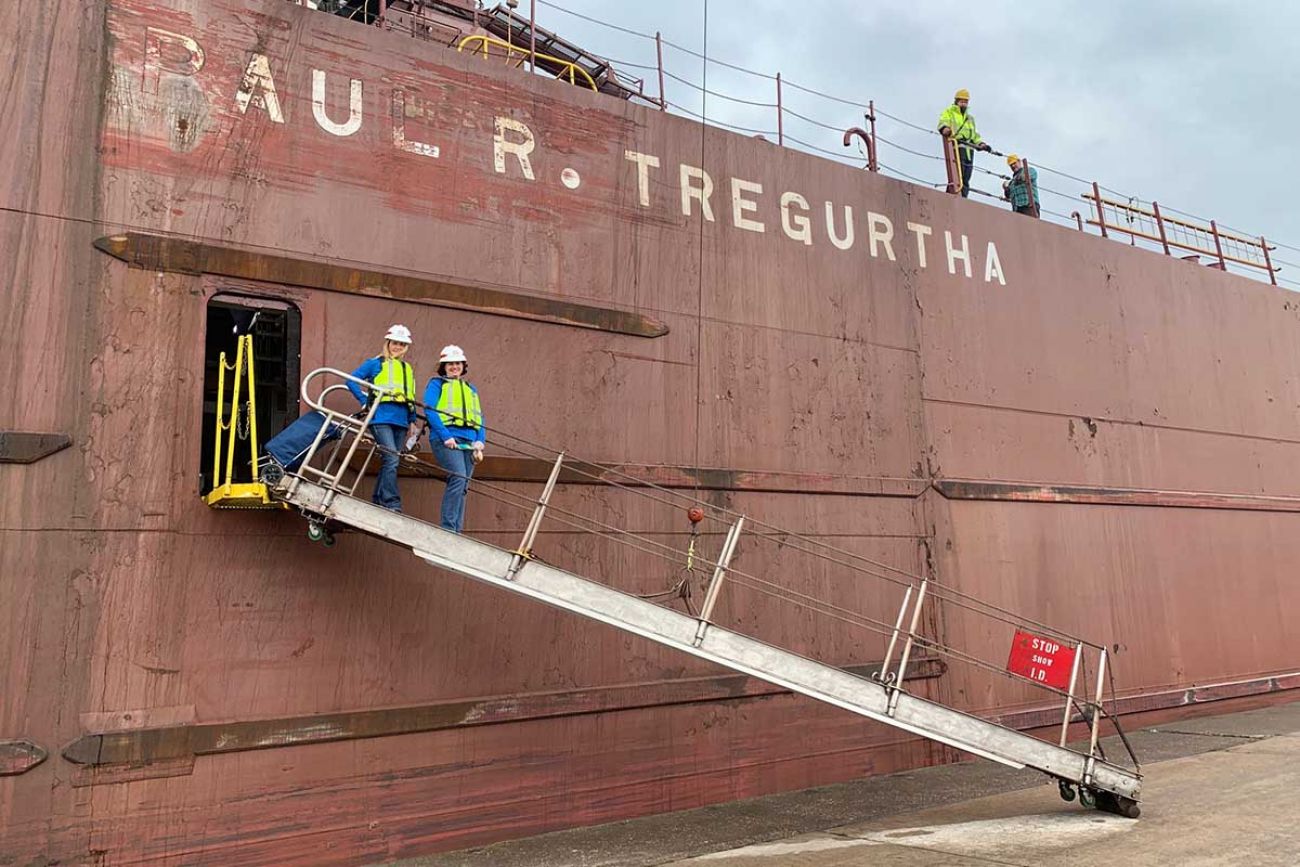 Health workers in Chippewa County are vaccinating crews on Great Lakes freighters as they pass through the Soo Locks, including those aboard the Great Lakes-based bulk carrier, the Paul R. Tregurtha. (Courtesy of U.S. Army Corps of Engineers, Detroit District.)

Tuesday’s halt to the J & J vaccine caused a scramble in Chippewa County. Senkus’s office was preparing the Johnson & Johnson vaccine for the crews of four lake freighters on Tuesday. The Moderna version had to be switched in, leaving health workers with a bit more work to ensure crew members get a second dose.

“We’ll try to catch them on their way back through,” Senkus said.

The one-dose J & J was also relied upon by organizations serving poor and more transient populations, which often are on the move, don’t always have ready access to a phone for making appointments or reliable transportation that allows them to show up for two doses, said Philip Bergquist, operations officer of the Michigan Primary Care Association, which represents health centers across the state.

“It’s not a lack of willingness on their part” to get a second dose, said Bergquist, whose group provides services to about 730,000 residents, primarily people who are medically underserved or uninsured. “It’s a lack of resources.”

On Mackinac Island, 160 seasonal workers were to receive the Johnson & Johnson vaccine Tuesday. But the boat carrying them was canceled at the last minute and appointments were rescheduled for next week with the  Moderna vaccine, said Nick Derusha, president of the Michigan Association of Local Public Health, who also serves as health officer for the LMAS Health Department, which covers four eastern Upper Peninsula counties.

Michigan universities also had to work quickly to sub in replacements for the single-dose vaccine, which they had planned to get into the arms of students before they finished school this spring and left campus.

Health staff at clinics at Oakland University and Michigan State University Tuesday swapped out J & J for the Pfizer vaccines, but a clinic at Eastern Michigan University was canceled, according to the Washtenaw County Health Department.

“We are telling students verbally when they show up this morning that they are getting the Pfizer vaccine and will need to get a second dose,” MSU spokesperson Emily Guerrant said. “We believe, with a three-week wait (before a second dose) that we can see them again here before they leave” the campus for the semester.