GRAND RAPIDS—In a Grand Rapids home she shares with her mother, Sallie Cooper meets each passing day and week, and wonders.

How much time might 96-year-old Lucille Butts have left?

And how long will it be until her mother can be vaccinated against COVID-19, to protect her during visits from home health aides? But also so that another daughter, who lives in Oregon, can safely see her, perhaps for the last time?

“It’s been very stressful,” Cooper said, as her mother rested beside her in a medical chair.

“She’s been declining. You know, it’s like this for a lot of people like my mother — this could be their last year, maybe their last months. It seems like they are being forgotten.”

Since COVID vaccines first arrived in Michigan, the vast majority of people over 65 have received at least one dose, thanks to policies that prioritized seniors in nursing homes or those able to find their way to clinics, sometimes through bus services. But quietly left behind are thousands of seniors like Lucille Butts — living alone or with family, but too infirm to travel, even for a coveted vaccine. 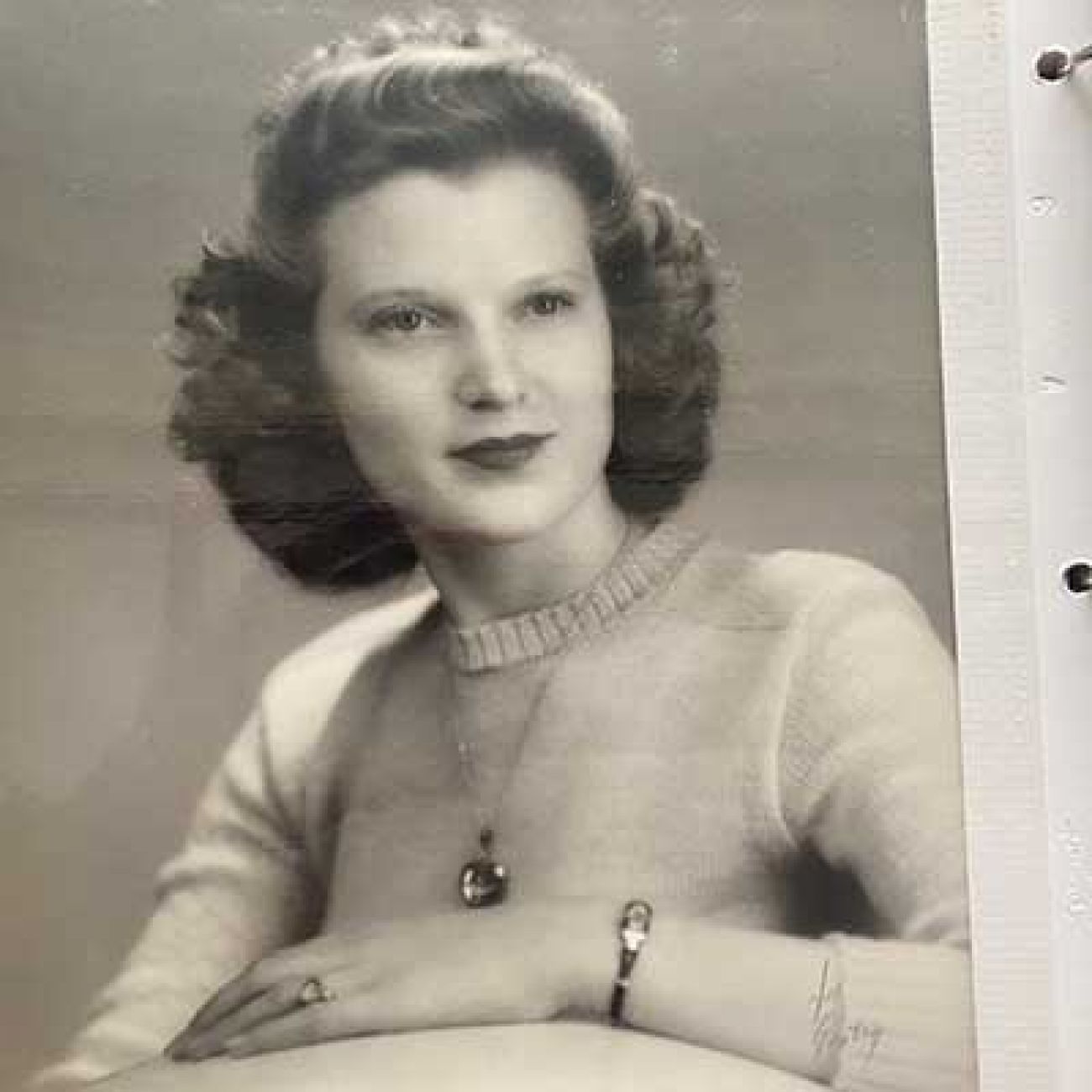 Cooper said she considered arranging a ride for her mother to a vaccination center through a local transit system. But given that her mother must be lifted from bed into a medical chair, has a weakening heart and suffers from spells of low blood pressure, she’s ruled that out.

In a pandemic that has seen Michigan lead the nation in COVID-19 cases, public health officials are trying to vaccinate as many people as quickly as possible — with the goal of immunizing 70 percent or more to reach “herd immunity.”

And among older residents, they’ve largely succeeded. Roughly 70 percent of people age 65 and older have gotten at least one COVID-19 shot. In long-term care and skilled nursing facilities, a vaccination drive spearheaded by Walgreens and CVS administered upwards of 285,000 doses to nursing home residents and staff, driving down COVID-19 cases and deaths in this age group.

And in recent weeks, transit systems across the state have stepped up on-demand rides for seniors and disabled residents to vaccination clinics or mobile vaccination units.

But advocates for seniors say that still leaves a critical void: thousands of isolated, homebound senior or disable adults, often too weak or sick to be transported to a vaccination site.

It’s a challenge rendered more complex as supplies of the single-dose Johnson & Johnson vaccine — the most efficient way to reach and protect this population — have been interrupted: first by contamination at a Maryland vaccine production plant, then Tuesday by suspension of that’s vaccine’s use amid reports of rare but potentially dangerous blood clots tied to the shots.

“I don’t know of any good way to do this, to vaccinate this group, and I’ve been asking for months,” Jackie O’Connor, executive director of the Area Agency on Aging of Western Michigan, said of efforts to vaccinate the homebound.

O’Connor estimates there are at least 1,800 homebound older or disabled adults in need of COVID-19 vaccination in Kent and Allegan counties, based on a survey her organization compiled with service partners including Meals on Wheels of Western Michigan.

“Sometimes they don’t want to get out of the comfort of their home, or they just can’t get into a vehicle,” O’Connor said.

“I had a wife tell me she wants to get a shot for her husband, but I can’t get him into a vehicle.”

A problem of scale

Michigan’s Department of Health and Human Services estimates that 110,000 residents age 65 and over statewide may qualify for homebound vaccination. Of those, only about 1-in-5 have been vaccinated to date, spokesperson Lynn Sutfin told Bridge Michigan this week.

O’Connor said an array of home health care agencies that deliver care, including nursing support, to thousands of older adults might seem a logical source to administer in-home vaccinations.

“But home care agencies in order to provide a vaccination have to have a physician who oversees the staff. Most of those home-care agencies do not have physician oversight,” she said.

In southeast Michigan, senior advocates say they too are frustrated.

“The issue is just the scale and the time it takes to provide vaccinations that way,” Taylor told Bridge Michigan. “It’s going to take a large-scale effort to deploy the appropriate personnel.”

In the Upper Peninsula, health officials face the added difficulty of having to traverse a far larger region, with many homebound residents living along dirt roads dozens of miles or more from a community of any size.

“That makes the challenge more difficult in terms of reaching particularly those seniors who are living alone, without family, and not near any hospital or clinic that serves any need they might have — not just COVID-19, but any health need.”

Mead said officials are still working to identify who those individuals are, so health systems can develop a system to vaccinate them at their homes.

“The biggest challenge is finding out who they are,” he said. “This is going to be front and center for us for quite a while.”

In Detroit, Detroit Community Health Connection, Inc., a nonprofit, community-based primary care organization, recently sent medical strike teams of a nurse, medical assistant and driver by van to the homes of about 30 homebound residents from a list compiled by the Detroit Area Agency on Aging.

But spokesperson Derek Ware told Bridge it had to suspend that operation.

“We just didn’t have the manpower to continue that,” Ware said. “We could only do about 15 people a day, because of the way they are all spread out. And some of these people are alone, so you have to wait 15 minutes to make sure there is no reaction to the shot. So it can take 30 minutes to give one shot.”

Ware said it used the one-dose Johnson & Johnson vaccine, an option it lost due to the slowdown in its production — even before the J & J vaccine was halted Tuesday.

“This week, we’re not getting any Johnson & Johnson,” Ware told Bridge this week, before the halt of the J & J vaccine.

Ware said the organization plans to meet this week with Area Agency on Aging officials to find a way to restart the program.

In southwest Michigan, Spectrum delivered more than a thousand homebound COVID-19 vaccinations since January, through a similar program operated by its affiliate, Spectrum Health Lakeland.

The official who oversees that program said it’s a collaboration between the Berrien County Health Department and the Region IV Area Agency on Aging, which coordinates services for older adults in three southwest counties.

“I would say it’s 90 percent volunteers and 10 percent our staff who are doing this. We put out a call for volunteers and they decided to be part of the humanitarian effort.”

But such efforts have yet to reach the Grand Rapids home where Lucille Butts passes her days.

“Is it time for lunch?” she asked as she sat recently with her daughter in the living room.

“Mom, we just had breakfast,” Cooper replied. “Let’s wait a while.” 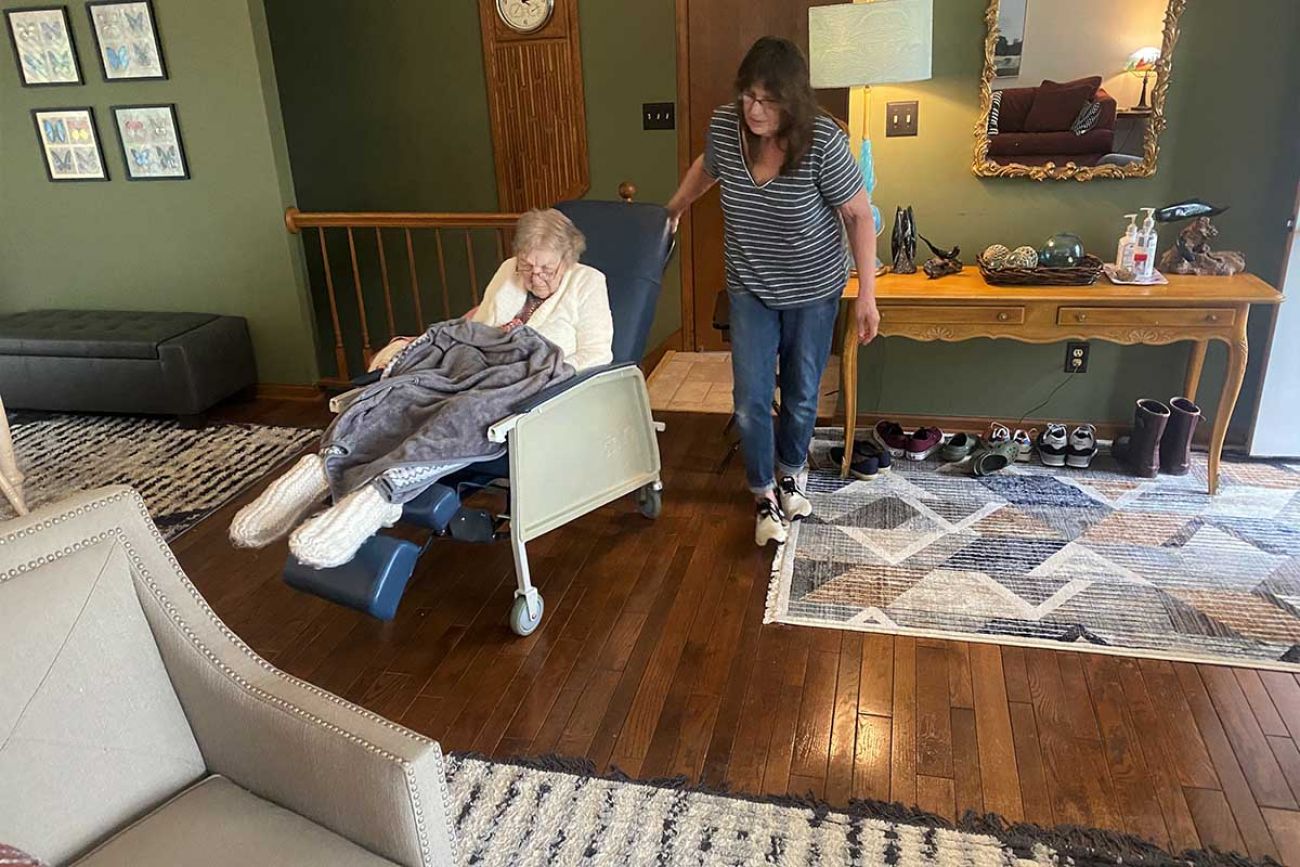 Grand Rapids resident Sallie Cooper said she has been unable to find a way to get her homebound, 96-year-old mother, Lucille Butts, vaccinated against COVID-19. (Bridge photo by Ted Roelofs)

That seemed to satisfy her mother for the moment. Cooper has lived with her mom for five years, moving in after a car accident left her mother with broken ribs, a punctured lung and a fractured shoulder. She lost some of her mobility after that.

In September, her mother’s health took another downward turn. She failed to get out of bed one day and slept around the clock for 48 hours.

“We thought we were losing her. But she rallied.”

Now, Cooper said: “We get about two good days out of seven, days where she knows us and knows where she is.”

Since the outbreak of COVID-19, Cooper said, she canceled the 40-hours-a-week of personal care her mother was authorized to receive under Medicaid because that would mean multiple aides entering the home, posing a risk of infection.

It’s a decision that can leave Cooper exhausted, as she tends to her mother on her own, with help from a single aide who comes two days a week.

Sallie Cooper is one of five children. Lucille Butts’s oldest daughter, Susan Sparkman, has lived in Oregon since 2014.

Until last year, Sparkman flew to see her mother twice a year — cherished visits that abruptly stopped with the pandemic.

Sparkman told Bridge she’d love to get on a plane again to see her mother, yet won’t risk it until her mother gets a vaccine. The family’s inability to make that happen has been difficult.

If her mother was 60, Sparkman said, she could patiently wait.

“But I know she doesn’t have much time,” she said. “Every time we see her, it’s like getting another piece of her to keep when she’s gone.”