Business is booming at Crypt Keepers Halloween Emporium in Center Line, where owner Dave Douglas said the holiday and its mostly outdoor festivities will allow Michiganders to release a pent-up need for fun during the pandemic. (Bridge photo by Michael Revalds)

After more than six months of canceled events and subdued holiday celebrations caused by COVID, Michiganders are ready to party on a rare Blue Moon Halloween.

“People are going to celebrate harder because so much has been taken away from them this year,” said Dave Douglas, owner of Crypt Keepers Halloween Emporium — a 7,000-square-foot retail explosion of the creepy and scary — masks, make-up, plastic rats, claws, fangs, blood and gore.

Others share that excitement, but are adding a giant dollop of precaution to this year’s celebration.

In New Hudson north of Ann Arbor, Josh Kesten said he and his wife, Julie, are eager to give their young daughters trick-or-treating after a summer of social distancing and canceled vacation plans.

Six-year-old Allison and 3-year-old Hannah settled on pink Power Rangers costumes after the parents insisted on costumes with some kind of face covering, and the girls will be asked to wear cloth masks underneath. They will skip crowds as they navigate the door-to-door gauntlet, trick-or-treating as a family instead and awaiting their turn at doors tight with trick-or-treaters, said Josh Kesten, a Ford engineer.

“We’re being cautious,” he said, “but we’re going full force.”

Allison Kesten, 6, and Hannah Kesten, 3, will trick-or-treat this year, but in ways that will keep them safe — like social-distancing from other children, said father Josh Kesten, of New Hudson. (Photo courtesy of the Kesten family)

Indeed, it may be difficult to ignore a pandemic Halloween this year “with the convergence of a full moon, a blue moon, daylight saving time and Saturday celebrations,” according to a color-coded national map. Powered by the Harvard Global Health Institute, the county-by-county map assigns trick-or-treating risk levels for adults and children based on rolling averages of confirmed COVID-19 cases per 100,000 in that county.

But even as a weary public looks forward to Halloween, COVID-19 lingers, with public health officials warning of a possible resurgence this autumn. While children generally don’t suffer the same severe symptoms from the virus, 624,000 already have tested positive nationally, according to the American Academy of Pediatrics.

In rare cases, symptoms can be severe for youngsters, including the development of Multisystem inflammatory syndrome in children, or MIS-C, a condition in which a child’s organ — heart, lungs, kidneys, brain, skin, eyes and others — become dangerously inflamed, said Teresa Holtrop, a longtime metro Detroit pediatrician.

“You will kick yourself if your child gets sick, and more importantly, they can become a vector,” spreading the virus to more vulnerable adults, she said.

But, for now at least, Halloween seems a “go” in Michigan.

Last week, the Michigan Department of Health and Human Services released a three-page set of guidelines for parents and others. The tips add to a national conversation about candy chutes, treats in trees and family costume parties as ways to balance the fun of Halloween with precautions against the virus, which has so far killed more than 6,750 Michiganders, according to state data.

The Kesten family’s pledge to avoid crowds on doorsteps is one of several common-sense guidelines cited by health officials. Frequent hand-washing, bringing along a sanitizer, and not handing out candy if you are sick are among other suggestions.

Local health officials around the state say they are offering advice for now rather than edicts, and leaving it to local governments to determine any legal restrictions on Halloween, public health officials told Bridge Michigan.

“It really is their determination at this time,” said Kerry Ott, spokeswoman for the Luce-Mackinac-Alger-Schoolcraft Health Department, which covers four counties in Michigan’s Upper Peninsula.

She and others urged parents to follow guidelines from MDHHS and the U.S. Centers for Disease Control and Prevention and consult the Harvard risk map.

“No one is recommending trick-or-treating, but we’re saying ‘If you’re going to do it, here are the safest ways to do it,’” ” said Lynn Sutfin, MDHHS spokeswoman.

On Wednesday, the Harvard map, part of a larger website promoted by the Halloween and Costume Association, cited four northern Michigan counties (Benzie, Mason, Clare and Sanilac) and one Upper Peninsula County (Ontonagon) as green counties, meaning the population has fewer than one case for each 100,000 people. “It’s on Like Donkey Kong!” reads one description for the green level, while also advising limited gatherings and encouraging neighborhood trunk-or-treats — where residents decorate cars and offer treats from their trunks — to avoid packing youngsters on narrow sidewalks or doorsteps.

“Watch for 6-foot [social-distancing] markers in front of homes and in driveways. [T]hat’s a great sign that those folks are going the extra mile to help keep you healthy,” the website suggests.

A county’s risk level can change quickly. Six counties in the Upper Peninsula Wednesday were newly assigned to the higher “red” risk level, with more restrictive guidelines after cases there climbed to more than 25 for every 100,000 people. Here, the website urges families to consider a Halloween piñata as a “fun way for the kids to get candy without the spread of germs!” or an online murder mystery party. 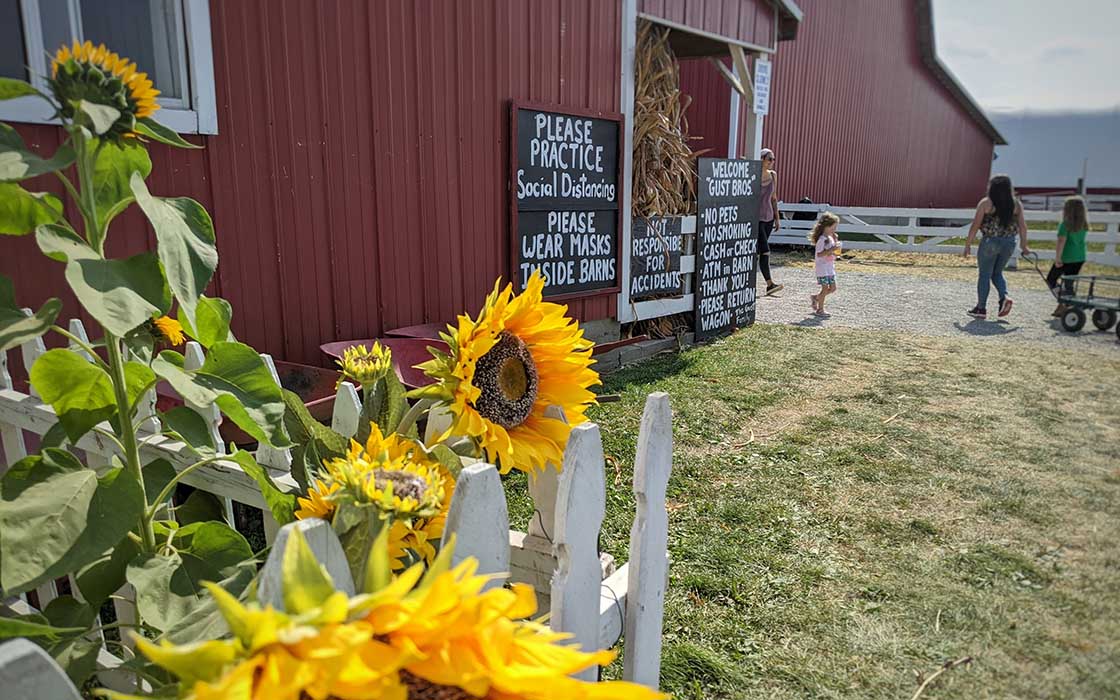 Sunday’s warm sunshine, combined with families who are “anxious to get out and do something normal” packed business at Gust Brothers, a family-owned, 80-acre pumpkin patch, said owner Terese Gust. (Bridge photo by Robin Erb)

On Sunday, customers packed the parking lot at Gust Brothers, an 80-acre autumn attraction in Ottawa Lake in southeast Michigan.

Signs encouraged social distancing, as customers picked pumpkins and fall flowers, fed cows and visited with rabbits and goats, and stocked up on mums, candles and jams. Gust offered spread tables for cider and donuts, but canceled hay rides this year: “You just can’t mix people like that,” owner Terese Gust said.

While school trips have dried up, she said, families have swarmed into the 30-acre, pick-your-own pumpkin patch.

“I can sense it,” she said. “People are anxious to get out and do something normal.”

If candy sales are an indicator, Michigan isn’t alone: The National Confectioners Association reports that Halloween candy sales were up 13 percent for the month ending Sept. 6. Accompanying the announcement was this hashtag: #HalloweenIsHappening 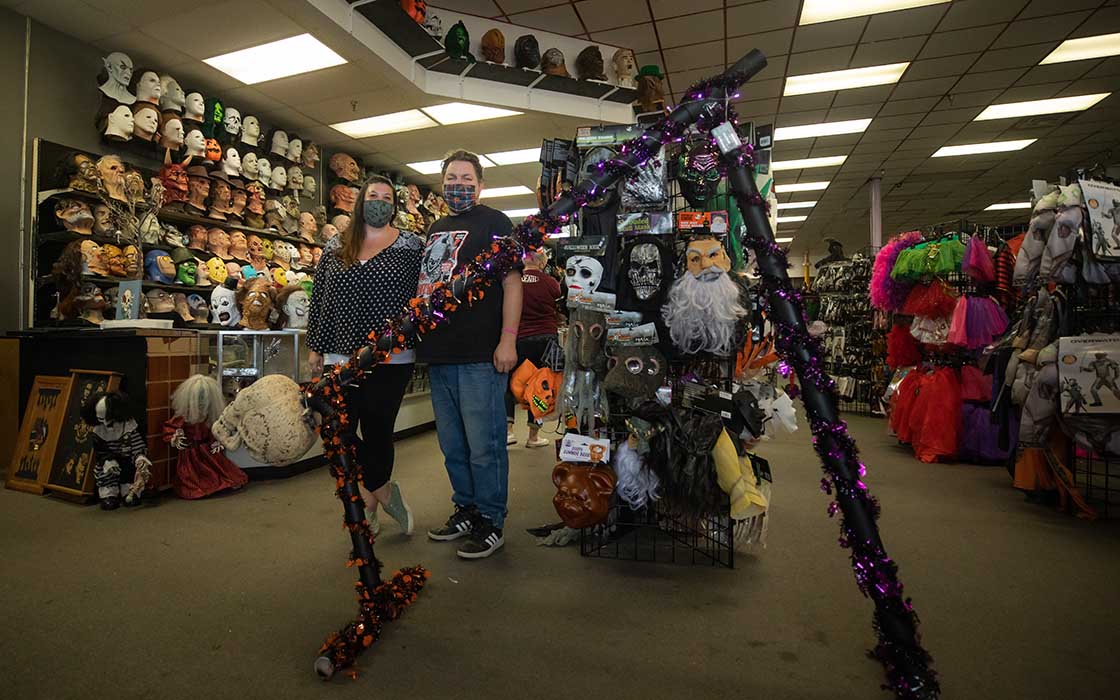 In Center Line in Macomb County, Douglas said his costume and novelty business was “drop-kicked” this year when comic cons and horror cons were canceled because of the virus, he said. Even his May wedding to his long-time partner, Jaime Herbert, has been delayed, further ratcheting a pent-up need to celebrate, Douglas said.

Halloween will offer a perfect outlet — full of make-believe and a greater ability to social distance since so many of the traditions are outdoors, said Douglas. This is, after all, a man whose mother used to dress up as Elvira on Halloween and allowed him as a boy to decorate the inside and exterior of the house.

“They’re just over it,” he said of his customers’ exhaustion with a seemingly unending pandemic. “We’ve never been busier.”

Officials said the organizer hung up on a nurse trying to warn others of possible exposure. Another person accused health officials of ‘working for Satan.’ Meanwhile, infections proliferate in the eastern U.P.

Please do not use photos in your articles where people are not wearing their masks appropriately - unless that is the subject of the article. I am weary of seeing masks worn under the lower lip or with the nose uncovered. Thanks!