Khaldun: Michigan has coronavirus testing supplies ‘through another week'

Testing for the coronavirus in Michigan, which the state said has ramped up to nearly 2,000 tests a day, may soon slow again because of what the state’s medical chief calls a “dire need” for swabs, reagents and other testing materials.

Based on current testing supplies in Michigan, “we could probably get through another week,” Dr. Joneigh Khaldun told Bridge Magazine.

“It’s an ongoing (concern),” she said of the state’s network of labs testing for COVID-19. “We have gotten requests from other hospital labs that say they are running out of reagents and may need to slow their testing if they don’t get more.”

A lack of supplies is particularly worrisome as Michigan logged its biggest one-day jump in cases on Saturday — 993 newly confirmed cases, bringing the state’s total to 4,650, the nation’s fourth highest. (Michigan now has 111 deaths linked to COVID-19.)

Michigan is well behind many other states in testing, a trend that has made it more difficult to anticipate the continued spread of the virus.

Michigan recorded 12,766 tests results as of Friday, according to the COVID Tracking Project, a health research collaboration. That’s far fewer than other states with a high volume of confirmed cases. It’s also far below other states in the upper Midwest. Ohio, for example, had results for 20,418 tests by Saturday; Illinois had 25,491.

Slowing the spread in Michigan requires being able to better identify the virus’s path through additional testing, Khaldun told Bridge.

“There’s an entire chain — from the swab to the transport media to the reagents in the lab — (that) we need to have to keep up with testing demand,” she said.

“Right now we are in dire need of getting additional reagents into our state so we can actually run the tests,” she said.

Possible help may come from the Trump administration, according to Detroit Mayor Mike Duggan. He said Saturday at a press conference that he had spoken to Vice President Mike Pence, who heads the administration's coronavirus task force, and was given assurances the city would receive help with supplies.

Detroit launched an aggressive testing program Friday on the site of the former state fairgrounds. 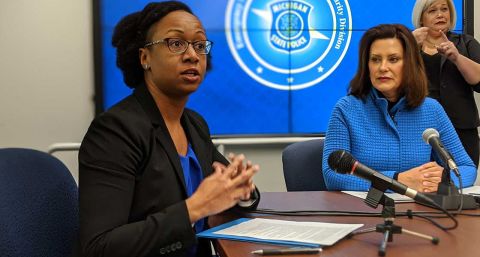 Khaldun also cited as a positive the president's approval late Friday of Gov. Gretchen Whitmer’s request for a disaster declaration, freeing up federal funds that could help set up “alternative care sites.” Whitmer has engaged in a running dispute with the president, with each blaming the other for a lack of sufficient protective equipment and supplies for healthcare workers in Michigan.

The federal funds also will help with mental health treatment to residents in the state, who have been under a general lockdown designed to blunt the pandemic’s spread in Michigan.

Khaldun said the state continues to have a critical need for N95 masks, the specialized masks physicians and nurses require when they evaluate and treat come in contact with COVID-19 patients. Whitmer announced Saturday that the state received 112,800 N95 masks from the Strategic National Stockpile, with another 8,000 on the way.

Khaldun estimated that hospitals need roughly 10 N-95 masks a day to treat a patient with COVID-19.

To put that in perspective, Beaumont Health, the state’s largest health system, had 768 patients hospitalized with the virus on Saturday, and another 180 in the hospital with test results pending, for a total of 948 possible coronavirus patients. So that would mean 9,480 masks just for those patients on a daily basis

“They’ve got nurses who are going to come in and care for them over a couple of shifts,” she said of COVID-19 patients. “Then there’s the ER doctor, and there's the respiratory therapist and all of those people who would need to come in touch with that individual,” she said.

As it is, Beaumont this week was requiring medical workers eligible for N95 masks to use a single one for three days due to a shortage of equipment. Similar restrictions were in place at other hospitals facing the brunt of the outbreak in Southeast Michigan.

It was not clear how many patients are hospitalized with COVID-19 throughout the state. In addition to Beaumont, Henry Ford Health System announced it had 430 COVID-19 patients hospitalized. In Ann Arbor, the University of Michigan hospital was caring for 76 patients; with tests pending for another 147 patients. Several other hospital systems did not make patient numbers available.

Coronavirus Tracker | Another 7,955 cases but some signs surge is leveling off