Michigan continues to stumble in tracking coronavirus in nursing homes

A confusing and incomplete picture of COVID-19 deaths in Michigan nursing homes emerged Friday after the Michigan Department of Health and Human Services listed — for the first time — the total number of nursing home coronavirus cases by county and nursing home.

According to numbers posted to the MDHHS website Friday, there have been 4,886 coronavirus cases in Michigan nursing home facilities. But that figure was immediately undermined by agency officials. MDHHS’s spokeswoman acknowledged the total was likely too low. And Dr. Joneigh Khaldun, the state’s chief medical executive and a deputy director of that very department, released a slightly higher total at an afternoon press conference: 4,949.

Friday’s release was also noteworthy for what the state could not show. Roughly 1 in 10 nursing homes did not provide information to the state on COVID-19 cases, despite an earlier executive order from Gov. Gretchen Whitmer that requires that information.

And Michigan continues to lag most states by not releasing nursing home death counts tied to COVID-19, saying that it lacks confidence in the accuracy of its calculations. Two days earlier, Robert Gordon, MDHHS director, told the Senate Oversight Committee that preliminary data revealed at least 1,216 nursing home residents died of COVID-19 complications, accounting for 23 percent of the state’s deaths from the virus.

The state’s continued inability to produce reliable numbers comes as advocates for the elderly call for greater transparency, and lawmakers amp up their rhetoric over the Whitmer administration’s handling of nursing home safety during the outbreak.

“What happened in Michigan is unacceptable,” he tweeted. “Government should have protected our most vulnerable, not needlessly expose them to the virus. They were counting on us and state government let them down. Innocent lives were lost unnecessarily. We need answers!”

Khaldun said she is “frustrated as well” by her agency’s delays in releasing nursing home data, which she attributed to an outdated system for reporting public health statistics.

Friday marked the first time MDHHS has released cumulative nursing home cases since the outbreak hit Michigan in March. Previously, the data had been a snapshot, revealing only active cases for that day. As Bridge Magazine reported, the state was also slow to publicly identify nursing homes reporting COVID-19 infections, before finally beginning to do so in late April.

State systems “have not kept up with what we need to be able to fight this pandemic and get people the information as quickly as we can,” Khaldun said Friday at a media briefing.

She said new data reported by nursing homes need to be “cleaned” of duplicates and inconsistencies before the department will publish it online.

“What I don’t want to do is put up data that’s not accurate,” Khaldun said. “What we know is that there are some facilities that are reporting to the local health department, but they’re not reporting to us, and we have to understand what that means.” 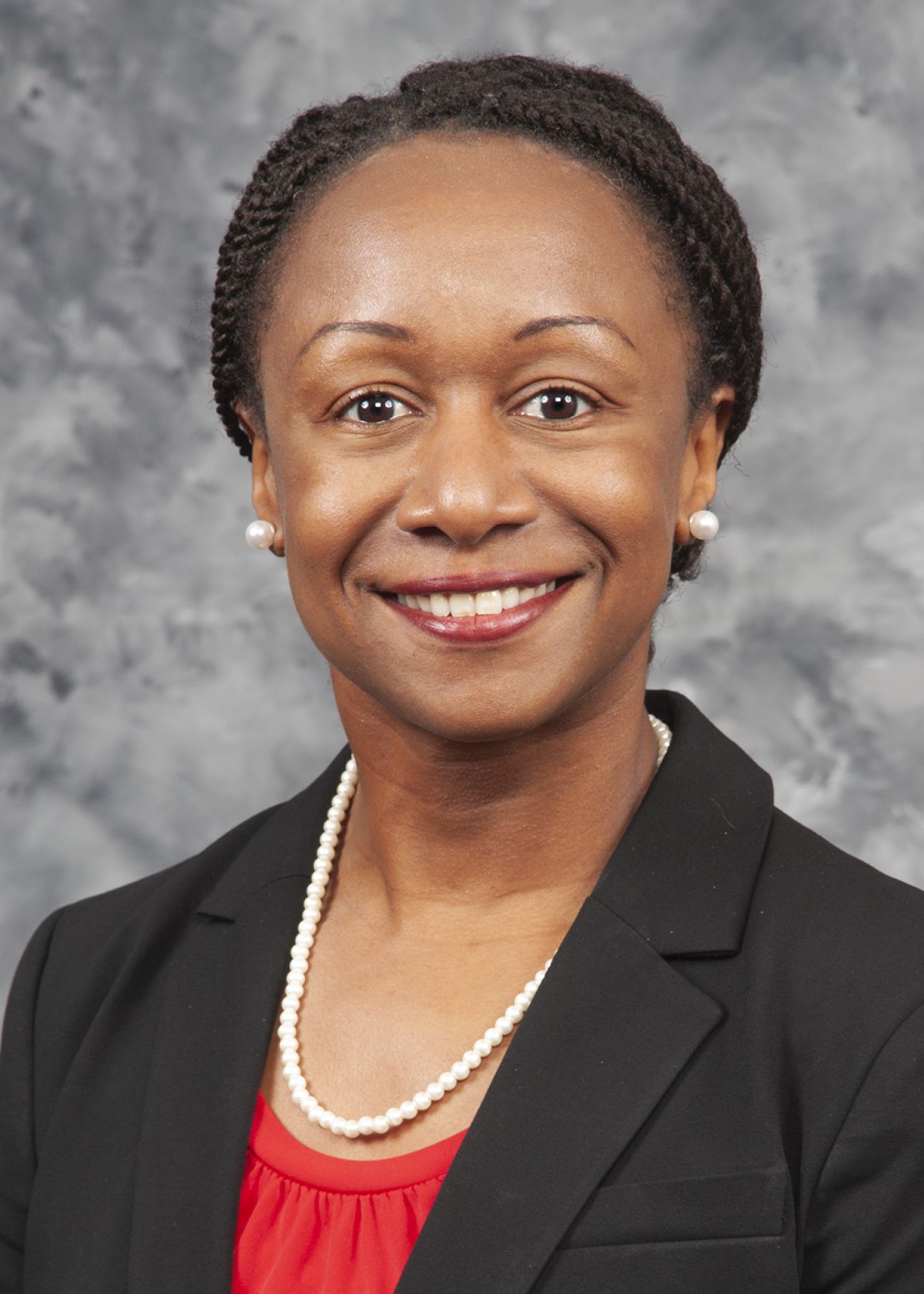 Khaldun said the state is also in the process of gathering data from other long-term care facilities, such as assisted living centers.

“But again, we’ve got to get it right, and we have to make sure people understand what to report, and we’ll continue making progress with it.”

Addressing nursing home numbers in general, Sutfin said some cases might be duplicates and are among the data the department is trying to “validate.”

She said the state began requiring nursing homes to report data differently a week earlier, on May 22, to comply with new guidelines from the U.S. Centers for Medicare and Medicaid Services.

Reporting kinks are still being worked out and the “the overall data (on COVID-19 cases) is an undercount,” Sutfin said. The state held a webinar Thursday to make sure facilities understand how to report data.

Michigan remains among a minority of states which have yet to release coronavirus deaths by individual nursing homes.

Pennsylvania — where about 69 percent of that state’s deaths are in nursing homes and assisted living facilities — lists COVID-19 deaths by county as well as by individual nursing home. It first disclosed that list on May 19.

New York State began releasing the number of COVID-19 deaths by nursing home in early May, though its reported share of coronavirus deaths among residents — at about 14 percent of the overall total — is thought to be low because the state does not count residents who died at a hospital as a nursing home death.

“I’m glad to see any progress toward getting that data out to the public. That’s good,” said Sarah Slocum, co-director of the Program to Improve Eldercare for Ann Arbor-based Altarum, a health care research and consulting firm.

“But I do think it would be reassuring and more informative for the public to include deaths by facility. Michigan homes may feel that makes them look bad but I think the public understands that this virus is deadly and contagious.”

Slocum also said she was puzzled by reported nursing home COVID-19 cases in some rural counties, including Alpena County in the northeastern Lower Peninsula. According to the state database, one nursing home in Alpena reported 61 cases while a nearby home reported zero.

“I think that merits investigation,” she said. “What’s going on there? These are small towns. Staff people would be coming and going from both of those nursing homes and it’s highly likely they are interacting with the same people in the community.

“It’s a question to me. We need to know more about these numbers.”

Whitmer has received praise nationally from public health officials for her cautious approach to reopening the state and its economy following a crush of coronavirus cases beginning in March. Despite high-profile protests against her quarantine policies, a consistent majority of Michigan residents have supported her handling of the crisis.

But she has faced heat for her nursing home protocols, which critics say have jeopardized healthy residents by requiring nursing homes to accept COVID-19 patients discharged from the hospital, possibly exposing other residents to the virus. Under Whitmer’s original emergency orders, nursing facilities were required to either house COVID-19 patients in dedicated units or, if they are not equipped, send them to other homes the state has designated as regional hubs.

At the same Senate hearing where MDHHS director Gordon spoke this week, Rep. Leslie Love, D-Detroit and a supporter of Whitmer’s overall handling of the crisis, labeled the governor’s nursing home policies “an epic fail” after her mother contracted COVID-19 at a Detroit nursing home.

Some nursing homes have had difficulty following coronavirus protocols.

Fairlane had placed the readmitted patients into rooms with residents who did not have COVID-19, inspectors said in a May 15 report. Inspectors also noted that staff entering the rooms did not discard personal protective equipment before leaving, which put other residents in “immediate jeopardy,” the report said.

Whitmer revised her executive order relating to nursing homes last week, recommending but no longer requiring nursing homes to create dedicated units and specifying that they should not accept COVID-19 patients discharged from the hospital if they do not have a dedicated care unit.

“We have taken actions to protect people in nursing homes, to articulate early on that we wouldn’t have visitors anymore, that it was going to be monitored very closely,” Whitmer said in a Thursday briefing.

The state was simultaneously working to keep people safe and ensure that elderly COVID-19 patients discharged from the hospital had “a place to go,” the governor said. “We’ve had to strike a balance. And I think as we continue to learn, we continue to improve.” 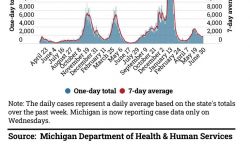 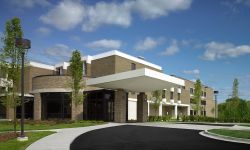