A new federal mandate requires millions of workers to be tested for COVID-19 if they refuse to be vaccinated against it. (Bridge file photo by Dale Young.)
September 10, 2021
Robin Erb (Email)
Michigan Health Watch
Coronavirus Michigan

Some Michigan laboratories could soon face shortages in COVID-19 testing supplies again, as delta-variant-fueled cases rise in the state and schools and businesses step up testing demands.

President Biden’s announcement of broad vaccine mandates — which will force millions of workers to choose between a vaccine or regular testing — could further stretch coronavirus testing supplies.

“I don’t think there’s enough (chemical) reagent in the country to do what he wants to — to test our personnel,” Dr. James Richard, medical director at Sparrow Laboratories in Lansing, told Bridge Michigan Friday. 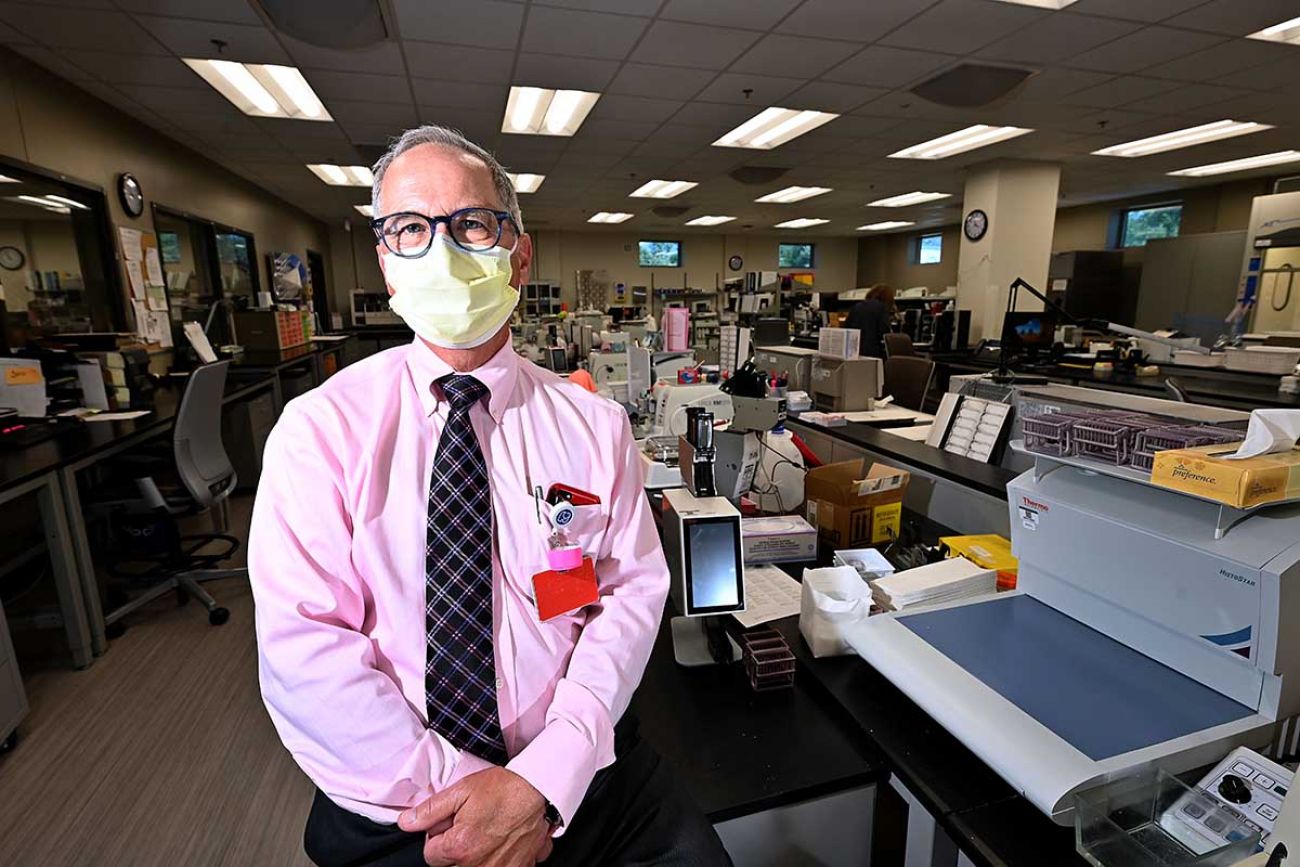 Just what that means for people needing a COVID test is not yet clear — and it doesn’t appear testing turnaround times have yet been affected.

Still, some worry that a continued climb in demand will mean a rush on at-home test kits, more pressure on test sites and the labs that support them, and longer waits for results — for workers, travelers and, in worst case scenarios, for those who are sick.

Dr. Richard lauded Biden’s Thursday announcement that will force millions of workers to be vaccinated against COVID-19 or submit to weekly testing, calling it a “bold move” to curb a resurgence of the virus.

But, he added, “it’s theory versus practice.”

Even when supplies are available, finding enough drivers or other personnel to distribute testing supplies can be a problem, he and others said.

“When you get to boots-on-the-ground, how do you get (supplies) from California to Vermont” and so on, Richard said.

To be clear, he said, supply chain issues haven’t yet affected COVID testing turnaround times at Sparrow as they did last year when global supply shortages meant Michiganders were waiting seven days or more for results. Most PCR test results are still available within 24 hours, he said.

He and others told Bridge this week that demand for testing supplies is climbing as COVID cases and hospitalizations remain elevated — “The volume (of testing) is beating us up,” he said — and they worry that new testing mandates will stretch supplies even thinner.

But it requires a day-to-day effort, he said: “Almost on a daily basis, we’ll see what’s in stock, see what’s coming in, try to predict the demand.”

The Henry Ford lab, he noted, runs the PCR (polymerase chain reaction) tests, considered the “gold standard” for diagnosing COVID-19. But he and his lab staff have seen problems in supply chains elsewhere, particularly in rapid antigen testing supplies — which the U.S. Centers for Disease Control and Prevention warned about last week. A shortage of rapid tests is likely to put more pressure on laboratories.

For now, shortages appear somewhat local as manufacturers scramble to boost supplies once again after scaling back production earlier this summer when testing demand dropped. Lynn Sutfin, spokesperson for the Michigan Department of Health and Human Services, said Friday the state is not aware of any Michigan labs with shortages.

But in the Upper Peninsula, “we have hospitals now relying on antigen testing because they’re running out of (PCR laboratory testing) supplies,” said Kerry Ott, spokesperson for the LMAS health department, which represents four counties in the eastern U.P.

Christ Gorges, CEO of Farmington Hills-based Quick Clinic labs, said his company had hoped to have by now 10,000 of Abbott Laboratories’ BinaxNOW tests — a rapid test widely used by nursing homes. One of Abbott’s facilities had closed this summer as demand for such tests plummeted. But the rise of the delta variant in recent months has changed the calculus.

“We’ve been told it will be December before we see one piece” of the BinaxNOW order, Gorges said Friday.

He said he doesn’t blame Abbott. It’s a supply issue as the delta variant and others pose a global threat. “They’ve been a good partner,” he said of Abbott.

He and others said they now draw supplies from a variety of manufacturers and distributors, so that if one supply chain dries up, they can turn to another.

Beaumont Health has also been keeping a close eye on testing supply chains, especially for rapid tests because of the “extremely high” customer demand. The health system has been “proactively building up stores of rapid testing supplies," according to an email Friday. Beaumont said such challenges have not yet affected its ability to provide routine test results within 24 hours. At its peak, the lab ran about 1,700 cases a day; on Thursday it ran 993.

It’s not yet clear how severely the Biden vaccine mandate will further affect the availability of testing supplies in Michigan.

As part of the sweeping plan to boost vaccination rates and contain COVID, Biden announced Thursday the federal government will buy $2 billion worth of rapid point-of-care and over-the-counter at-home COVID tests — 280 million tests in all — from various manufacturers to distribute to schools, long-term care facilities, community testing sites, homeless shelters, jails and other sites.

The plan also calls for major retailers Walmart, Amazon, and Kroger to sell at-home tests at cost for most customers and free to those on Medicaid.

But just how soon all that happens is unclear.

And that, in turn, can put stress on labs as it did last year during earlier surges of the coronavirus when nursing homes and other long-term care facilities had to do regular testing of staff and residents, said Nick Decker, laboratory services director at Memorial Health Labs, which provides testing for Owosso-based Memorial Healthcare and residents in Detroit.

Last year, when the Centers for Medicare and Medicaid began requiring nursing homes to test, it took several weeks to get the testing supplies distributed and staff trained to administer them in-house, Decker said. Nursing homes contracted with laboratories to run the testing in the meantime.

“There’s usually a lag between when someone strikes the pen (drafts government policy) and when things are fully operational,” he said.

Compounding the problem is that many supplies have been put on “allocation,” meaning that labs can only order them in limited quantities, he and others said.

“I used to be able to stockpile supplies, but I can’t bump up that stock like I used to,” Decker said.

And that’s a problem as the number of new infections in Michigan has risen since early July, with cases likely to climb this fall as students return to school and people spend more time indoors as the weather cools.

Labs continue to face waves of COVID cases, Decker said, and it appears that Michigan may be on the front end of another, even as testing mandates pressure supply chains.

“As the waves go up and down, you need to be in front of them, get ahead of them,” he said. “It’s too late when it’s already here.”