The ravages of vaping to a Michigan teen’s lungs – a 17-year-old believed to be the nation’s first double lung transplant for vaping-related respiratory system failure  – was “an evil I haven’t faced before,” one of the surgeons said Tuesday.

Dr. Hassan Nemeh, surgical director of thoracic organ transplant at Henry Ford Hospital in Detroit, said he had to forcefully manipulate the young man’s lungs from his chest because they had hardened and scarred so severely.

“What I saw on his lungs was nothing that I've ever seen before, and I've been doing lung transplants for 20 years,” Nemeh said during an afternoon news conference with a team of other Henry Ford Health System doctors.  “There was an enormous amount of inflammation and scarring in addition to multiple spots of dead tissue.”

Nemeh and his colleagues said they were holding a news conference to expose the damage that vaping caused to the teenager. And while careful to point out that it’s still unclear precisely what causes this year’s onset of vaping-related lung illnesses, they urged consumers, especially young people, to steer clear of e-cigarettes and other vaping devices.

Doctors said the hospital called the news conference to raise awareness about the dangers of vaping, especially among youth. “It is somehow being portrayed as a benign habit,” Nemeh said. “It’s a potentially deadly situation. 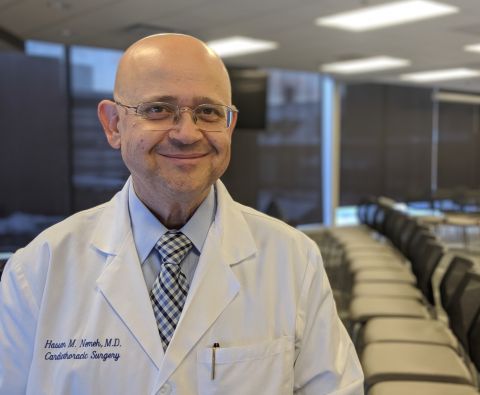 The U.S. Centers for Disease Control and Prevention is investigating at least 2,051 cases of e-cigarette, or vaping, product use associated lung injury, or EVALI. In Michigan, the Michigan Department of Health and Human Services has received reports of at least 46 probable and confirmed cases.

At least 39 people have died in the United States, including one person from Michigan.

It became clear earlier this year that many patients had used e-cigarette products with liquids that contain cannabinoid products, such as tetrahydrocannabinol (THC). Last week, the CDC announced that lab tests of fluid samples from 29 patients with EVALI found vitamin E acetate, an additive in the production of e-cigarette, or vaping, products — a possible “chemical of concern.”

Public health officials and the U.S. Food & Drug Administration have raised alarms about vaping products — noting the presence of formaldehyde, acrolein, and acetaldehyde, which researchers say cause irreversible lung damage, and nickel, lead, and chromium, which are known to be toxic when inhaled.

Doctors Tuesday would not release details on the teenager, including how long he had been vaping and whether the product he used included a cannabinoid product or vitamin E acetate.

But they laid out terrifying, life-and-death moments in which doctors rushed to transfer the teen – at one point moving a life support machine from one hospital to another in the trunk of a doctor’s SUV.

He had been rushed to St. John Sept. 5 with what appeared to be symptoms of pneumonia. His condition worsened, and he was intubated on Sept. 12. He was then transferred to Children’s Hospital, where he was connected to an ECMO, or extracorporeal membrane oxygenation” device to keep him alive.  The device is a long-term heart and lung machine, similar to equipment doctors use during open heart surgery to provide partial or complete support for the heart and lungs. ECMO also is used to give organs time to rest and heal.

“When we got there we weren't sure even how we were going to carry (the life support equipment in), so I grabbed the wheelchair from the front of the hospital to transport this machine,” said Dr. Nicholas Yeldo, anesthesiologist and critical care physician. “But then, one of our colleagues from the receiving hospital came and joined us one of those carts that you usually push for your lunch on.”

The teen was connected to life support, rushed to Henry Ford, and deemed eligible for a lung transplant. His condition was so severe that, combined with this age, he shot to the top of the transplant list.

On Oct. 15, he underwent a 6-hour transplant surgery after donor lungs became available. Doctors would not release information on the donor, only to say that the lungs were healthy. 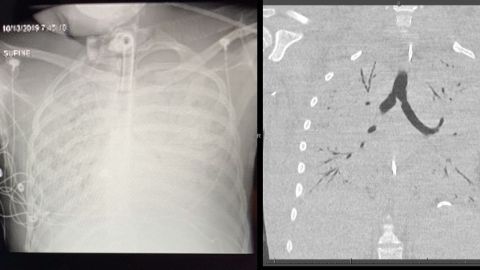 And doctors showed side-by-side comparison of the lungs – the teenagers’ and the donated lungs. The teen’s scan is barely visible, so deadened was much of the tissue, Nemeh said. An enlarged picture of the teenager being rushed to Henry Ford Hospital had been propped nearby.

The prognosis for the teen is positive and he was removed from a ventilator Oct. 27. Still, recovery is slow, said Allenspach, the program’s director.

“We’re hopeful given his youth and the progress that will happen in the future that he will be alive and well for a long time,” she said.

"Without the heroic measures that were taken in this case, this young patient would have died — there is no doubt about it," Yeldo said.