It's official: Flavored e-cigarettes are now illegal in Michigan

A new ban on flavored nicotine vaping products has some Michigan retailers wondering if they’ll be able to stay in business. “I’m gutted,” said one. (Bridge photo by Robin Erb)

Michigan’s ban on flavored nicotine vaping products — the first to be announced in the nation — is now in effect.

Sales and distribution of flavored nicotine vaping products are now a misdemeanor, punishable by up to six months in jail and a $200 fine, according to the emergency rules released by the state’s health department. The rules, filed today at 11:05 a.m., are effective immediately, meaning retailers and resellers, including those who sell online, have 14 days to remove the product from their inventory.

“This bold action will protect our kids and our overall public health,” Democratic Gov. Gretchen Whitmer said in a statement. 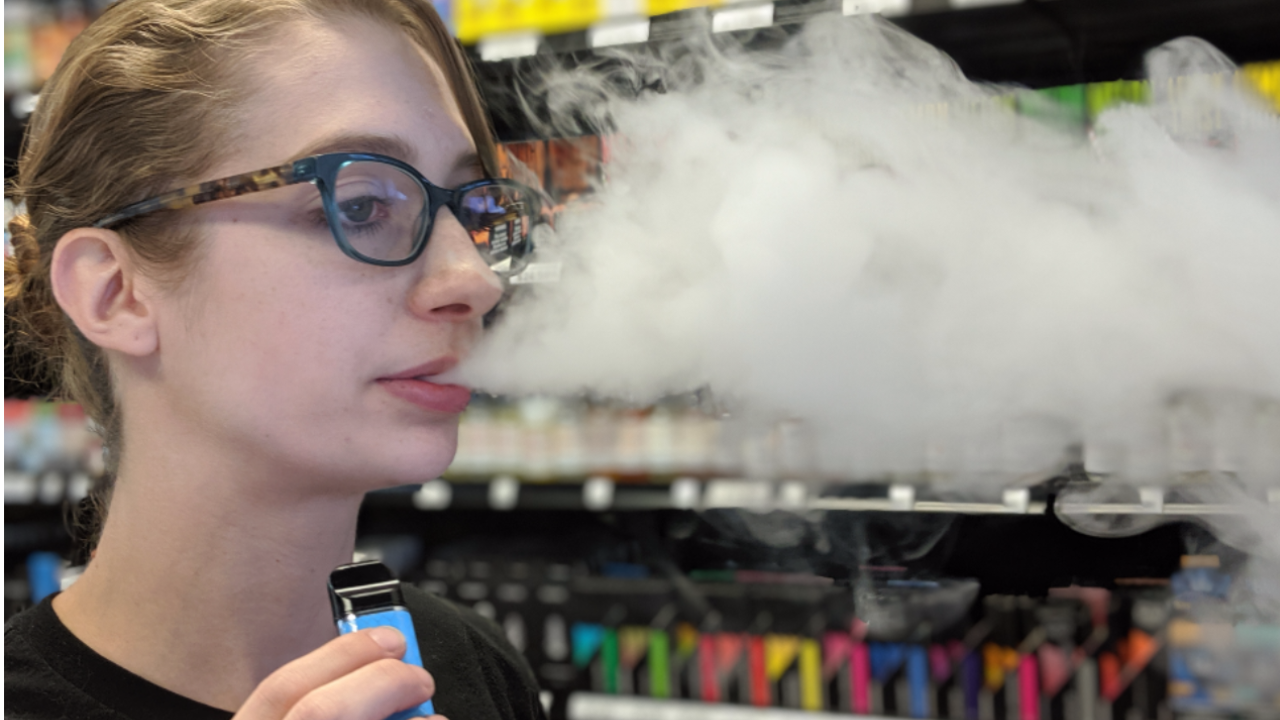 Facing criticism of the ban, Dr. Joneigh Khaldun, the state’s chief medical executive, told the House Oversight Committee last week that the move was necessary because of skyrocketing levels of youth vaping. Vaping surged in Michigan schools between the 2015-16 and 2017-18 school years, rising 30 percent in some districts and more than doubling in others, according to state health officials.

Additionally, the U.S. Centers for Control and Prevention is investigating hundreds of cases of respiratory illnesses, including six deaths, associated with vaping in recent months. Most of the patients reported using e-cigarette products with liquids that contain cannabinoid products, such as tetrahydrocannabinol (THC).

Critics of the ban, however, say vaping helps adults quit the much more dangerous habit of smoking cigarettes. They point to declining rates of smoking among youth as well, suggesting youth may choose to vape rather than smoke.

Some owners of vape shops and party stores say they will be forced to close.

At the Liquor Cabinet in Lambertville, two miles north of the Ohio border, Jason Jindo said the ban “came out of nowhere.”

“I have $400,000 in inventory. What am I supposed to do with that?” said Jindo, who said he smoked his first cigarette when he was 13 and didn’t quit smoking until he turned to vaping in his late 20s.

Vaping products make up 25 percent of his sales, he said: “We’ll lose business to Toledo,” he said.

“I am gutted,” said Marc Slis, the owner of vaping shop in Houghton in the Upper Peninsula.

Slis, 55, drove 501 miles to attend the House Oversight Committee last week.  In an impassioned speech, he told lawmakers he had been a smoker for 41 years, including 30 years in which he tried “everything” to quit, including hypnosis and smoking cessation products in other countries.

Vaping saved his life, so much so that he purchased the shop. A ban will not only put him out of business, it will force smokers-turned-vapers back to combustible tobacco, he said.

Whitmer’s announcement this month made Michigan the first in the U.S. to announce such a ban. The Trump administration since has called for a similar ban by the U.S. Food and Drug Administration, and New York put its ban into effect on Tuesday. California also has announced plans for a ban.

The Michigan ban follows a state law passed this summer prohibiting the sale of e-cigarettes and other non-traditional nicotine products to minors.

A divided court declared unconstitutional  a 1945 law Gov. Gretchen Whitmer has used to issue orders without input from the Legislature. The GOP declares it a ‘great day’ and the fate of 120-plus orders from Whitmer are now in question.

Why does this discussion exempt flavored Marijuana products?

Question: When will the legislature take on recreational and medical marijuana that has similar addictive principles as nicotine, and may be used indiscriminately in vaping apparatus as are most illegal narcotics. Reality check: The "wizards of smart" in Lansing are legislative buffoons when it comes to a comprehensive understanding of the adverse effects of marijuana, the constitution and Federalism. Just saying!