Plasma may hold promise for Michigan coronavirus patients, but where is it?

Michigan Health Watch
Plasma may hold promise for Michigan coronavirus patients, but where is it?

Plasma donated by those who survive COVID-19 might be one of the best immediate hopes for the sickest patients in the coronavirus outbreak. But a logistical logjam — donor confusion, lengthy screening, special scheduling, and extra testing for antibodies — means critically ill patients often cannot get hold of the plasma in a timely fashion. 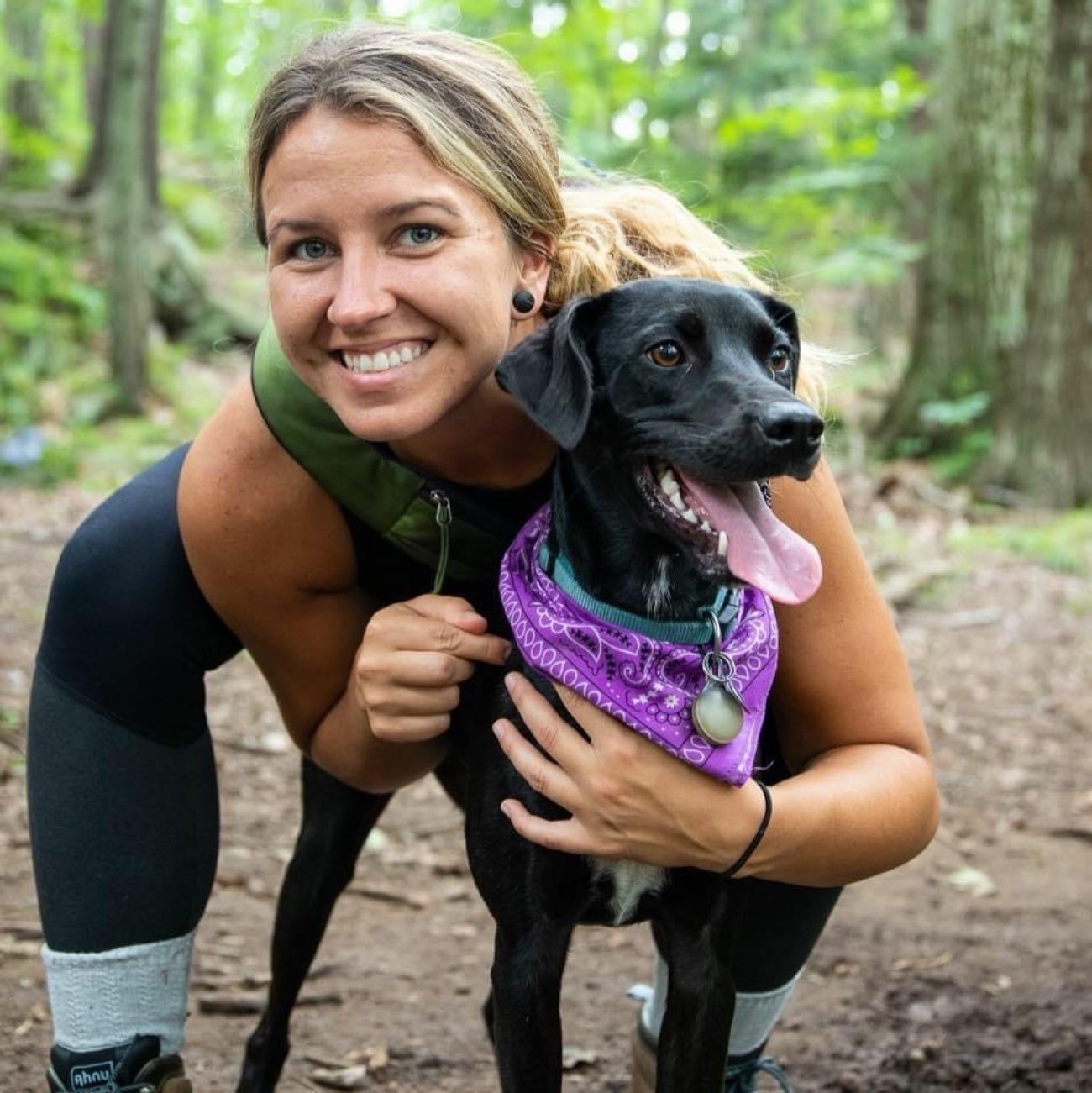 In more routine times at Ascension Providence Southfield Hospital, a doctor could order a unit or two of plasma from the hospital blood bank and have it thawed, prepared and ready for an infusion within an hour. Plasma (the clear, yellow liquid part of blood) typically is used for cancer patients, or people with liver and bone marrow transplants. Its clotting factors also can help hemophilia patients.

But during the new coronavirus outbreak, finding convalescent plasma — plasma donated by someone who recently survived COVID-19 — can be an agonizing search as doctors are forced to make calls and families turn to social media or mass emails in a desperate bid to find donors.

Across the country, just over 6,600 hospital patients have been given the experimental treatment, with demand nearly twice that number.

“A patient on a ventilator doesn’t have five days to wait.”

Convalescent plasma is donated by people who have recovered from a COVID-19 infection and hopefully built an immune response to the virus that can be useful to others. Antibodies captured in plasma are collected by mostly by donation agencies such as the American Red Cross and others in the AABB, which represents the nation’s accredited blood banks.

Plasma transfusions are hardly new as a means to fight back against attacking viruses; there is mixed evidence they have provided at least short-term immunity to diphtheria, flu, measles and other infectious diseases.

Anecdotally and in small studies at least, convalescent plasma as a treatment for COVID-19 patients seems promising, though it is too soon to know for sure. Researchers hope it might even help those with underlying medical conditions or who are most highly exposed to the virus, such as health care workers and front-line responders, to ward off infection.

As doctors scramble to find treatments until a vaccine is developed, convalescent plasma is but one of several possibilities. The U.S. Food and Drug Administration recently approved a drug, remdesivir, to treat COVID-19. But even after its fast-track approval last week, the extent of its benefits remain unclear. Also in doubt is the effectiveness, and safety, of hydroxychloroquine, which early on had also seemed promising.

But with any large, national endeavor, it takes time to set up a system, and delays connecting plasma donors to doctors to COVID-19 recipients “are not trivial,” said Paneth, head of the national project.

One major impediment is a small pool of donors. There are several reasons for this.

Thousands of potential donors may be asymptomatic carriers of COVID-19, and don’t know they have valuable antibodies they can donate. A national shortage of tests means few people without symptoms have been eligible to be tested.

Then there are the strict eligibility requirements for blood (and plasma) donations. The restrictions are designed to ensure a person’s blood (and plasma) is safe to donate, but they can also create a backlog, said Todd Kulman, spokesman for the Michigan region of the American Red Cross.

In addition to the routine criteria for blood donations, until last week a convalescent plasma donor had to have had a prior verified diagnosis of COVID-19 and be symptom-free for a period of weeks and fully recovered.

That left plenty of people who may have had mild cases of the coronavirus but who, on medical advice, stayed home until they felt better and never got tested.

“Only a small number of those who applied are eligible,” Kuhlman said, noting that it can take “up to seven days” for staff to review an application and reconnect with potential donors.

“It's taking more time than we thought it would,” he said.

Last week, the Red Cross changed its policy and began testing plasma from donors who believed they had been sick with COVID-19 but never been tested.

That should break some of the logjam, both Kuhlman and MSU’s Paneth said.

As of Thursday morning, nearly 11,500 COVID-19 patients had received transfusions across the country, according to the COVID-19 expanded access program, which allows patients to receive plasma if they follow FDA-approved protocols set out by the Mayo Clinic.

For one who received plasma, a “miracle”

For Clare Carr’s family, the scramble for plasma was part of a harrowing two weeks that began with a bit of achiness and a fever April 15.

Tested curbside outside her doctor’s office, Carr, a yoga instructor, who, according to her family, had been practicing social distancing, was found positive for the virus.

Still, the 32-year-old Ferndale woman felt well enough to quarantine herself at home, playing with her dog, Luna. For several days, she suffered minor aches and grogginess, but no fever.

But then things changed fast. 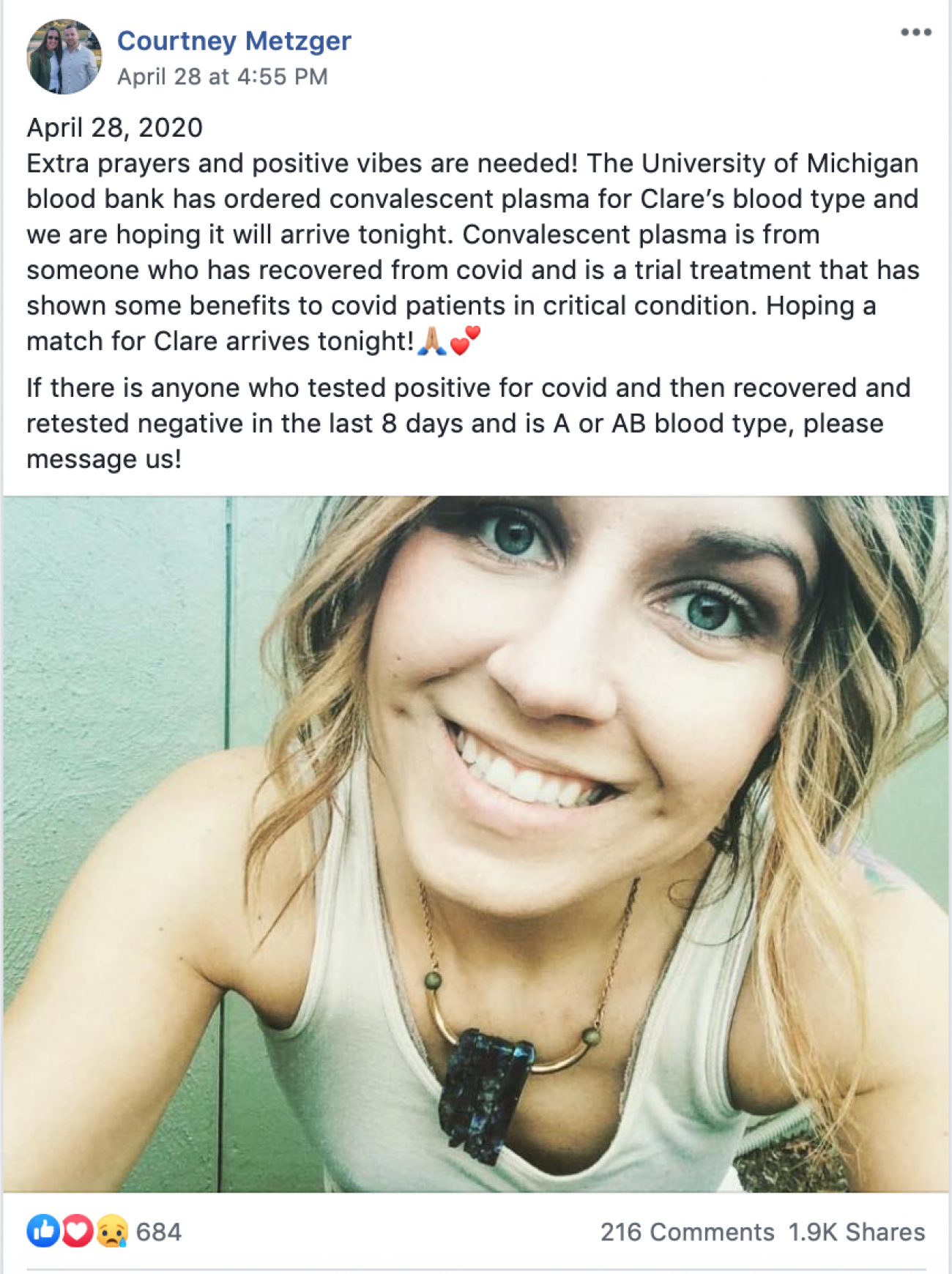 On April 22, Carr was on the phone with her doctor in the middle of the night after experiencing chest pain.

She was sent to Ascension Providence Hospital and, hours later, was flown by helicopter to the University of Michigan where she was immediately connected to an EMCO machine, which does the work of a patient’s lung and heart, allowing these organs to rest as the body fights the virus. On Thursday, U-M’s Dr. Robertson Davenport, head of its blood bank, called Carol Carr, Clare’s mother, to say Clare’s serious condition made her a candidate for convalescent plasma.

The mother signed consent papers for her unconscious daughter; and Davenport ordered the plasma from the hospital's supplier, the Red Cross.

Then days passed with no plasma.

So the family turned to social media in its own search for donors. 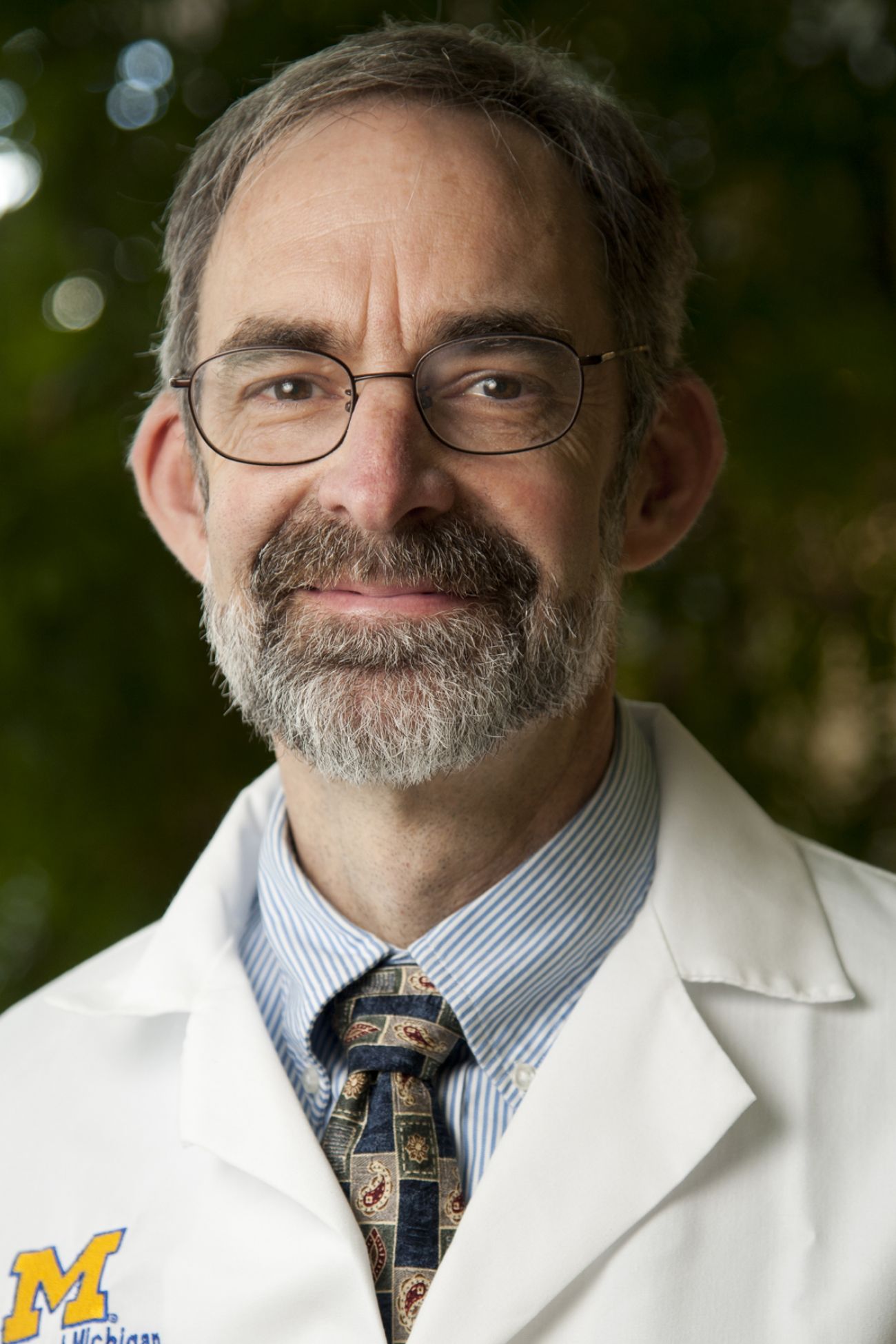 The confusion was apparent among those who responded: Could they donate if they had been sick but hadn’t had a test? How could they get their plasma to Clare?

The uncertainty is understandable, said Paneth. Potential donors don’t know how to navigate a large network of blood banks, and online searches can be overwhelming.

Five days after her family OK’d the treatment — late Tuesday evening, Clare Carr received a transfusion of convalescent plasma. The family said it isn’t sure where it came from.

One week later, she is off the ECMO machine, off the ventilator and has been able to FaceTime with her family, though she remains too ill to speak publicly, according to her family.

“It has been only a couple of weeks, but it feels like forever,” said her mom, a retired teacher.

Whether it was the ECMO, the ventilator, the plasma, the power of prayer,  the “good vibes” from social media supporters, or a combination of them all, she’s improved. “It is a miracle,” said Carol Carr.

As it stands now, COVID-19 patients may receive convalescent plasma one of three ways.

The very sickest patients may be eligible to receive plasma through a special “compassionate use” permit that is fast-tracked through FDA’s Investigational New Drug application process. A doctor submits an online form for each patient; approval can happen within hours.

Hospitals, including Michigan Medicine and scores of others in Michigan, can offer plasma through the Expanded Access program, meaning they’ve agreed to follow protocols established by the Mayo Clinic and approved by the FDA. The 21-page protocol document puts limits on which patients receive plasma (only the seriously ill in acute care facilities) and requires certain paperwork (signed consent forms by the patient or their proxy, among them).

And patients also can receive treatment if they are part of a clinical trial. The University of Michigan is finalizing paperwork that could establish a clinical trial to test whether non-critical patients treated with convalescent plasma can be prevented from getting worse. And Beaumont Health  launched a program to test antibodies as a step toward understanding their effect against COVID-19.

Those large-scale clinical trials will eventually determine whether the donor plasma is effective against COVID-19 and at what stages of the infection.

But with COVID plasma scarce, it’s unclear how quickly those clinical trials can get off the ground, said Davenport at U-M's blood bank.

Without enough plasma, “it’s a very open question about whether we can support any of these trials,” Davenport said.

Davenport would not disclose the outcomes of the seven infusions at U-M, saying in part because it’s too early to discern how much, if any, effect the plasma had on patients who’ve undergone a range of possible treatments.

MSU’s Paneth likewise would not talk about outcomes on a national level, although he notes no patients have reported significant adverse reactions.

“There’s a huge demand for this, and there are a lot of potential bottlenecks in the process,” he said.

Donors are waiting, too

From Ferndale, Michael Schwartz said he wants to do his part as well.

The Wayne State University law student heard about convalescent plasma and immediately thought of a way he could stop feeling so helpless during the lockdown. He’d been mildly sick in the early days of the pandemic, and tested positive at one of the state’s first curbside testing sites.

Online searches led him to the American Red Cross on April 6. He said he registered and got an automated response. Nine days later, someone called to book an appointment for him to donate plasma May 6. Then someone called again, saying that, because of a lack of staff, they’d have to postpone the appointment until May 15, Schwartz said.

Kuhlman at the Red Cross couldn’t say why a specific appointment was rescheduled, but he acknowledges it has been “a challenge” to staff blood drives. With fewer surgeries during COVID-19, the need for donations plummeted. Additionally, mobile drives were canceled as the virus swept through Michigan, and the organization was forced to move staff around “to where we need them.”

“I don’t know, I just look forward to doing it so I feel like I'm doing something,” he said. “Even a little part.”