Treatment and trials go on, but Michigan doctors split on coronavirus drug

Thousands of people are being recruited to participate in southeast Michigan clinical trials — touted as among the largest in the country — to test the effectiveness of hydroxychloroquine in the battle against COVID-19.

But since a 3,000-person Detroit trial was announced April 2, an increasing number of reports have shed doubt not only on the drug’s effectiveness, but also its safety. Some warn of potentially deadly changes to the heart’s rhythm — an alarming side effect so widespread the U.S. Food and Drug Administration last month warned against the use of hydroxychloroquine outside of a closely-monitored hospital setting or clinical trial.

Those concerns, along with growing skepticism about hydrochloroquine’s effectiveness, have fueled a sharp decrease in U.S. hospital orders of the drug. Some hospitals are even pulling the drug from treatment.

“There was a lot of hope for [hydroxychloroquine] initially, but it has not panned out,” said Dr. Dennis Cunningham, medical director of infection control at McLaren Health Care.

A preliminary review of COVID-19 patients at U.S. Veterans Health Administration hospitals found that those who took hydroxychloroquine had higher death rates than patients who didn’t take the drug. Additionally, they were no less likely to end up on a ventilator.

Meanwhile, case reports began building in the FDA Adverse Event Reporting System that raised concerns about serious health problems tied to hydroxychloroquine and related drugs in 2020. In some cases, the results were deadly.

Last week, a research team led by a Harvard Medical School doctor published a review of several studies, raising concerns about whether the drug might actually impair the body’s ability to fight the COVID-19 virus. The review called for limiting the drug to COVID-19 patients in a “carefully constructed randomized clinical trial.”

As the virus began burning through southeast Michigan in March and April, the 14-hospital McLaren system added hydroxychloroquine to its treatment for COVID-19 patients, and a few doctors said there might be “some benefit in some patients,” Cunningham said.

But by this week?

“I have to say that doctors are moving away from using it. It’s just not effective,” he said Wednesday.

The stakes are high to find an effective treatment against the virus, which has sickened more than 45,000 Michigan residents, with a death toll of 4,343 as of Thursday.

There’s no vaccine yet to prevent infection, and medical experts worry about a second wave of the virus as social-distancing rules are relaxed. Hence, the scramble to find an effective treatment.

Just one drug, Remdesivir, was fast-tracked to approval, but results even there have been short of stellar.

That leaves doctors at each health system to make their own decisions, based not only on what the research indicates, but also on results among their own patients. It’s a judgment call that has begun to create stark contrasts in treatment protocols from one hospital system to the next. 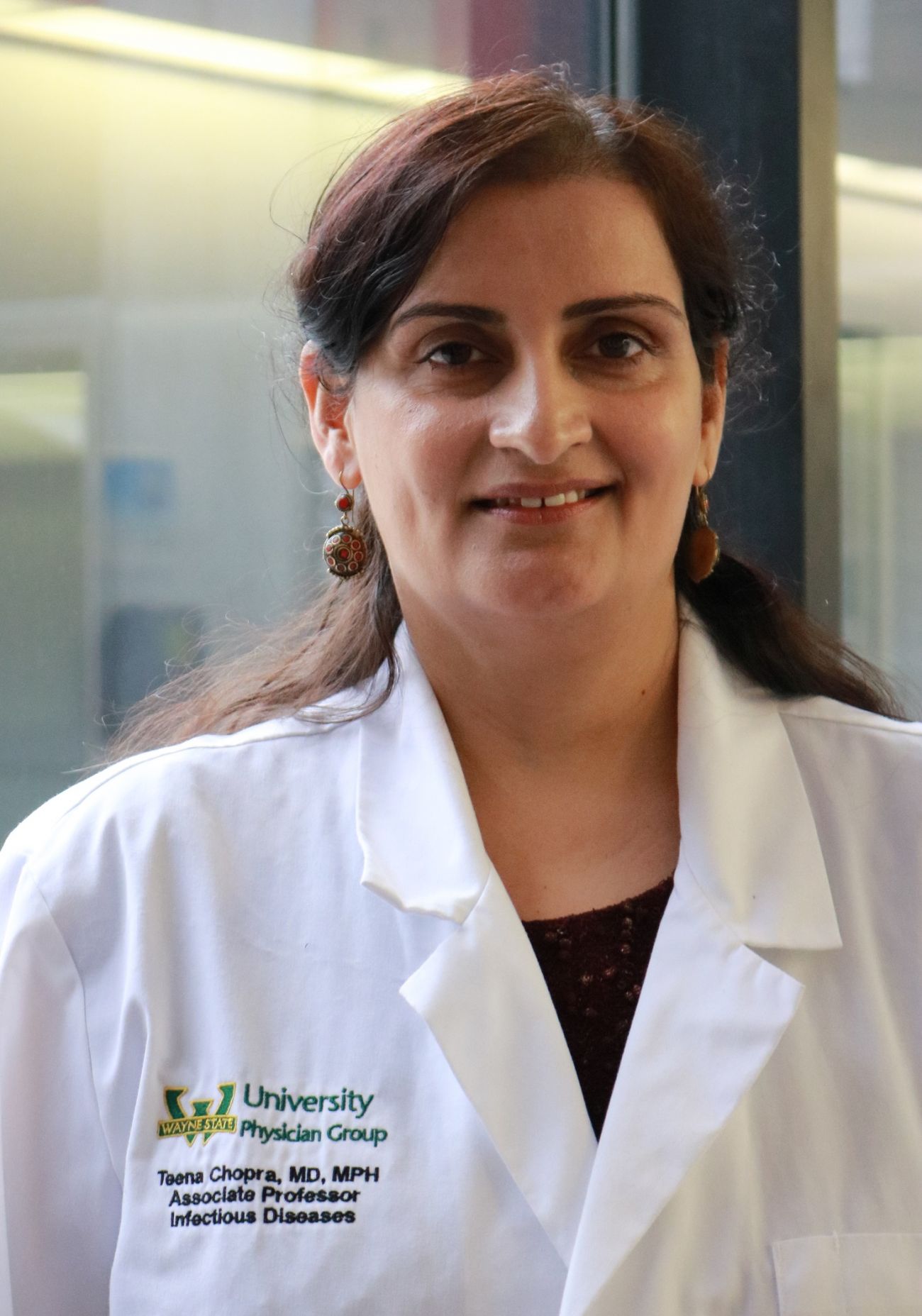 “We haven't seen any harm,” said Chopra, who oversees DMC’s infection prevention efforts. “And we've been able to take patients, use this [drug] and delayed the need for ventilation in some category of our patients.”

Still, she said, doctors are closely watching its use.

Beaumont Health doctors, like those at Ascension healthcare system,  have been less impressed.
“I don't think [it] is hurting anything, but we don't feel that it's been helpful,”  said Heidi Pillen, director of pharmacy for medication use policy at Beaumont.

Michigan Medicine also has stopped using hydroxychloroquine to treat COVID, unless the patient is enrolled in a clinical trial. That’s because of side effects ranging from vomiting to heart and liver problems, said Dr. Vineet Chopra, Michigan Medicine’s Chief of Hospital Medicine.

“I remember that the first few patients we gave it to were just sick to their stomach with nausea and vomiting,” Michigan Medicine’s Chopra said. “...And here’s somebody who's having a hard time breathing, and now they're throwing up."

“We actually use it a lot in outpatient settings for other conditions, like rheumatoid arthritis.”

But Barnes said it’s crucial to first screen patients for underlying heart issues with an electrocardium, or EKG test (the test that shows a patient’s heart rate as a wavy line fluctuating with each heartbeat).

Whether hydroxychloroquine helped Sam Washington fight his COVID-19 infection in early April, he’s not sure, but Washington, 73, is feeling better these days.

The Detroit resident said he was prescribed a dose of hydroxychloroquine and four doses of azithromycin, an antibiotic, at Beaumont Hospital’s emergency room in Dearborn. He’d felt ill, and emergency room doctors told him he’d tested positive for the virus. Medical staff monitored him for several hours, he said.

“Then they called my daughter and told me I could go” home.

If anyone mentioned the possible risks of the medications he’d been given, Washington said he doesn’t remember it. “They said ‘Here, take these.’”

Once home, he started improving. “I got better,” Washington said.

In mid-April, Michigan Medicine announced it would be enrolling participants in a massive, multi-site research pool of healthcare workers run by Duke University, including a 15,000-person study into whether hydroxychloroquine prevents or reduces the effects of COVID.

Meanwhile, Henry Ford Health System, one of dozens of hospitals across the country studying the drug’s potential, said it will continue a similar  clinical trial.

It’s recruiting 3,000 healthy health care workers, first responders and bus drivers for the trial, to find out whether daily doses of hydroxychloroquine taken at home, can help people avoid contracting COVID-19. Participants won’t know whether they’re receiving a regimen of hydroxychloroquine or a placebo, allowing researchers to tease out from the comparison groups whether the drug had an impact.

“And while this is only a study of an unproven medication — there are no proven cures or preventative treatments for COVID-19 — we owe it to them to look for ways to protect them.”

People with “significant heart or retinal disease” and those who are pregnant or nursing can’t join the study.

Once enrolled, participants are assessed three times and give five vials of blood over the course of 8 weeks.They also receive weekly phone calls “to see how you have been feeling,” according to the study’s guidelines.

“The biggest concern is, if you have a complication … [like a] life-threatening arrhythmia, the only way to treat somebody is to shock somebody,” says Barnes, the Michigan Medicine cardiologist, referring to defibrillation.

“We use the paddles you see on TV. If that happens in a hospital setting, you can do that almost immediately. If you’re out in the community, we may not know that’s happening. Again, it’s a rare complication, but it does at least raise concern.”

According to records on public file, both the Henry Ford Health System and Michigan Medicine studies would exclude anyone with a history of QT prolongation, a “heart rhythm condition that can potentially cause fast, chaotic heartbeats” and can be deadly if left untreated, according to the Mayo Clinic.

But it’s not clear whether researchers are screening for that condition with an EKG test — something Dr. Barnes, the Michigan Medicine cardiologist, said is critical.

And as first responders and health care workers, they’re already at higher risk of contracting the virus, raising additional concerns about the possibility of the drug impairing the immune system.

“There is some association with COVID and heart tissues from the virus itself,” Barnes says. “If you were on hydroxychloroquine and you had [underlying issues] and you developed a heart condition from covid, there could be issues there.”

Participants in the Henry Ford trial are required to sign an “informed consent” form that warns about “rare but serious” side effects, including reduced counts of the white blood cells that help fight infections and potentially deadly heartbeat abnormalities.

Such complications are “only likely to happen in fewer than 1% of those who take the study drug,” according to the form.

But a recent study at Boston’s Beth Israel Deaconess Medical Center found that 19 percent of COVID patients treated with hydroxychloroquine “were at increased risk of electrical changes to the heart and cardiac arrhythmias.”

However, patients in that study already had COVID, potentially increasing their risks of heart issues to begin with.

It’s a tricky ethical question, said Kayte Spector-Bagdady, chief of Michigan Medicine’s Research Ethics Service: What should researchers do when new information about potential risks of the medication they’re studying only becomes available after the trial has already started?

“Do you need to update your consent form going forward? And do you need to go back and tell all your [already enrolled] participants, ‘Hey we have this information, do you still want to continue?’ I don’t think it’s clear, but I think it’s an important issue.’”

Even if participants are given that new information, they’re still in a tough spot: Spector-Bagdady says if she were a participant in the study, even she wouldn’t know how to process all this new information and wrap her mind around the risks.

“As a professional research ethicist focusing on COVID...I wouldn’t know how to translate that risk myself. I wouldn't know what to do with that information.”

A spokesperson for Henry Ford declined to say whether participants in its study have experienced any side effects thus far, or whether the emerging concerns about hydroxychloroquine may influence its study, other than to say participants are being closely monitored. Michigan Medicine did not immediately respond to similar requests.