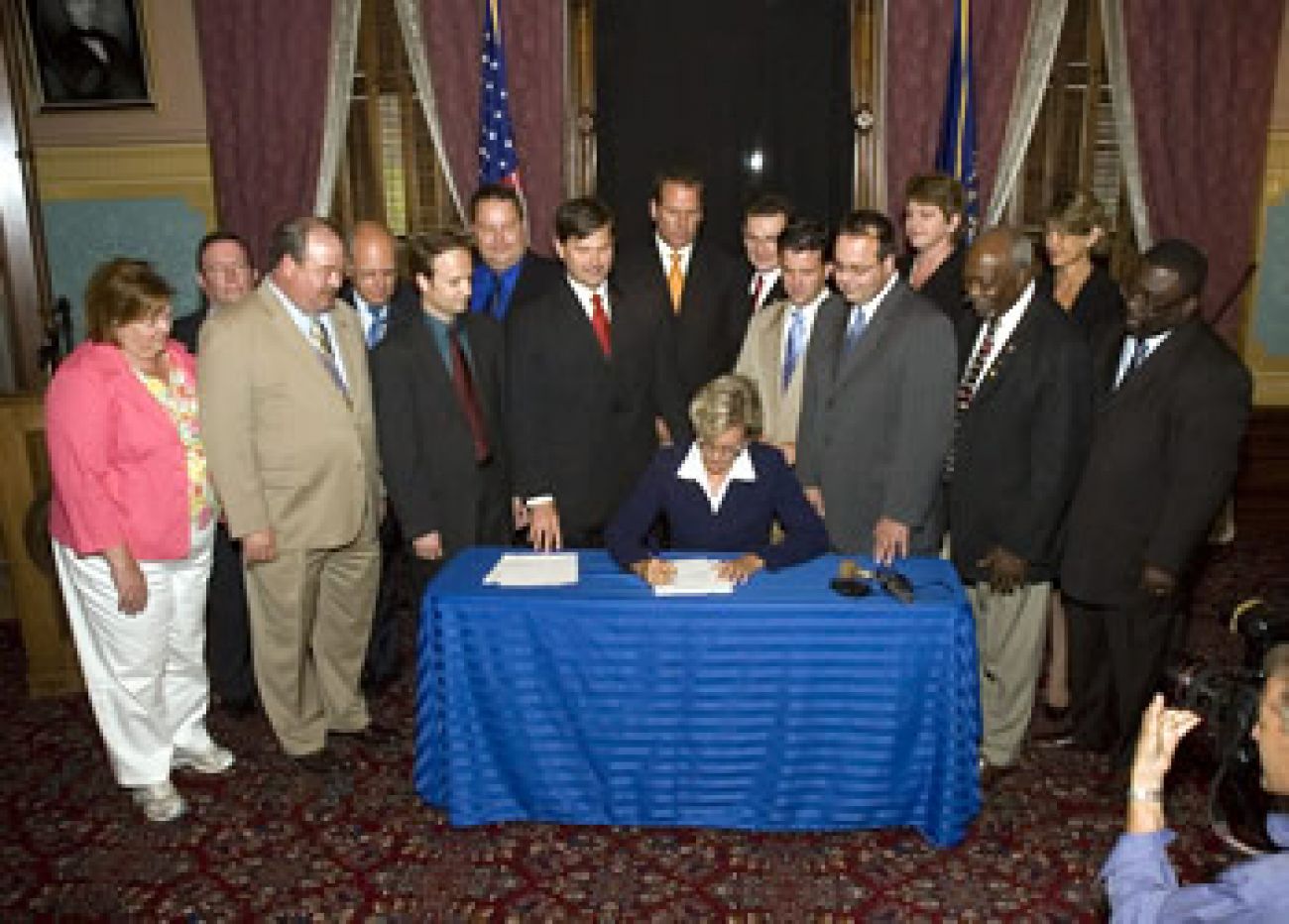 The Republican from Ionia County is running on the Snyder administration’s record to appeal to voters who have supported the governor’s tax and economic growth policies. Calley’s website touts his accomplishments, citing several instances where he said he played a leading role in tax reform.

Snyder is backing his No. 2 over the generally acknowledged GOP front-runner, state Attorney General Bill Schuette — who has had a contentious relationship with the governor. But how much credit can a lieutenant governor rightfully claim for a governor’s political wins?

“Brian was the driving force behind two historic tax cuts, which has (sic) resulted in increased prosperity and substantial job growth. These reforms took Michigan’s business climate ranking from 40th to 12th and the corporate tax ranking from 49th to 8th. He was the deciding vote to balance the budget, creating more stability for every Michigander.”

That influence extended to his role in“(r)eplacing the job-killing Michigan Business Tax with the simple, fair and efficient Corporate Income Tax…”

The organization said it could not find a record of a year in which Michigan ranked 40th in overall business tax climate.

When asked to provide an explanation for the 40th ranking, the Calley campaign shared a link to a 2008 CNBC ranking of states on business metrics, in which Michigan was 40th.

When Truth Squad pointed out the campaign compared two different data sources, a spokesman responded: “By any measurement it is indisputable that Michigan's business climate has improved dramatically.”

On the tax reform issue, as lieutenant governor Calley is president of the Michigan Senate and is able to vote in the event of a tie. He did just that in May 2011, when the Senate deadlocked, 19-19, on a bill that included creating a new flat corporate income tax. 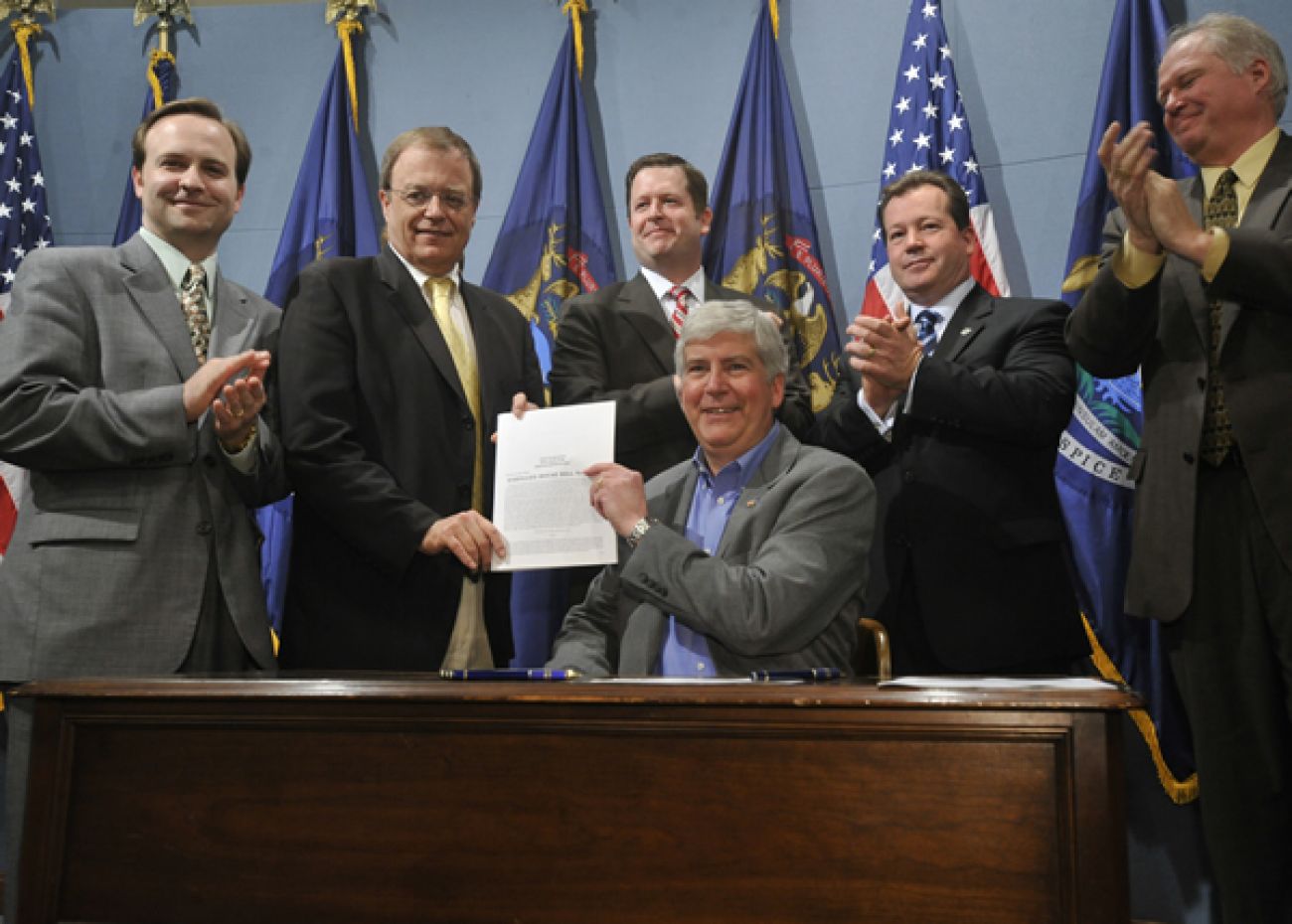 The Calley campaign told Truth Squad in an email he “cast the deciding vote on the budget and tax reform in 2011. He was the administration's point person on tax reform (including its development presentation to the legislature) and cutting regulations to make Michigan's economy (more) competitive and kickstart the state's economic comeback. Later he was the administration lead on developing and passing the phase out of the Industrial Personal Property Tax.”

What Calley and his campaign do not mention, however, is that he was for the MBT before he was against it.

Calley was among lawmakers who helped write the business tax in 2007 when he was a first-term state representative. He was named to a conference committee of six legislators that crafted the version of the MBT language that ultimately was adopted. He even attended the bill signing with then-Gov. Jennifer Granholm, a Democrat.

“Democrats controlled two-thirds of government at that time, and I was a minority member in the House of Representatives,” Calley told Truth Squad. “Once (Republicans) got control of the Legislature … we could take it a lot further and scrap the old tax code and put something more competitive in.”

The rating: HALF ACCURATE.

Quantifying the influence that a No. 2 public official has on the policy wins of the top dog is inherently difficult. Calley seeks to ride the victories of the Snyder administration and the outgoing governor is happy to abet that effort to help boost Calley’s campaign.

But in latching onto the state’s very real economic recovery since Snyder took office, Calley offers truths interspersed with mistruths, while leaving out important details that could easily mislead voters who didn’t know the full story of Calley’s work in Lansing.

His campaign’s use of different data sources to show improvement in the state’s business climate is deceptive and also puzzling, given Michigan’s very real gains on this metric. And in latching onto whatever role he played in eliminating the MBT, he failed to note his own role in helping to create the despised tax, a history that voters are entitled to consider when picking the next governor.