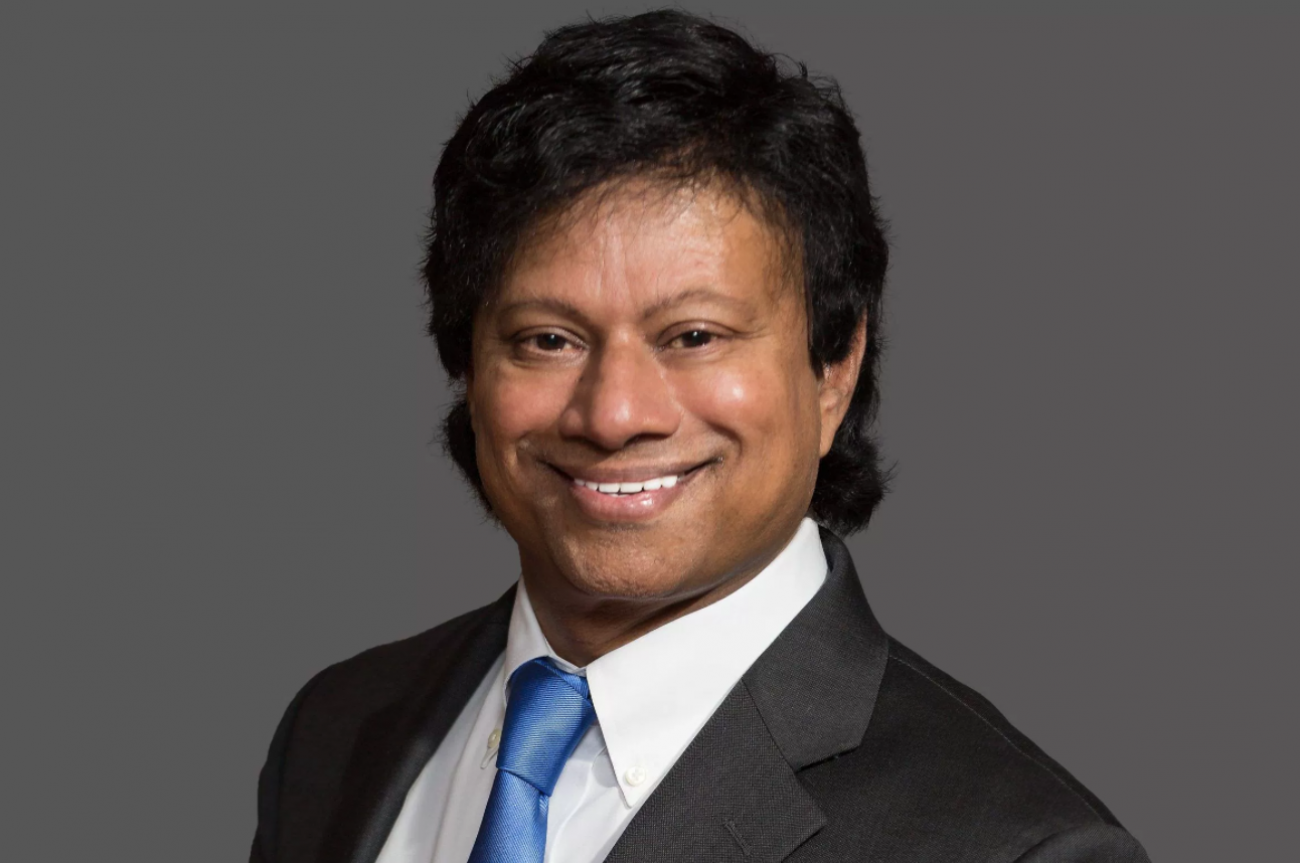 Shri Thanedar, a scientist, entrepreneur and one of the four Democratic candidates for governor, told attendees at a town hall in Ann Arbor this month that he would ban charter schools managed by for-profit companies if elected. He followed that up with a tweet: 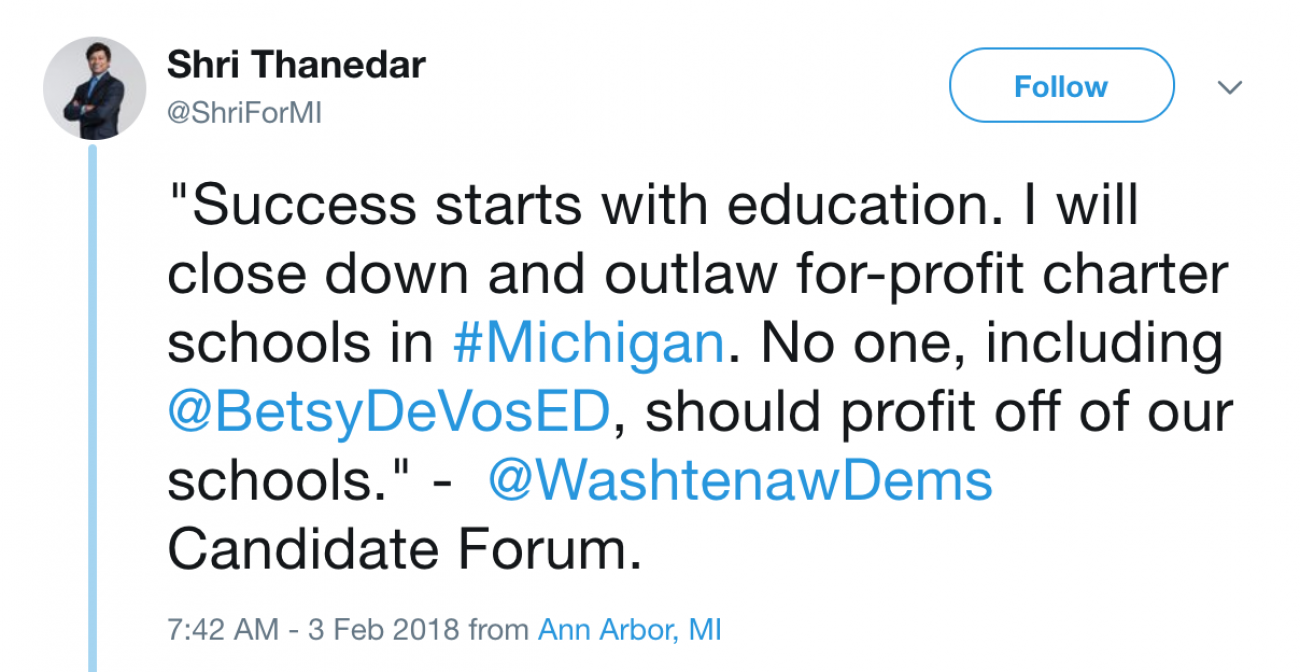 “Success starts with education,” he wrote. “I will close down and outlaw for-profit charter schools in #Michigan. No one, including @BetsyDeVosED,  should profit off of our schools.”

While Thanedar would clearly jump at the chance to close and outlaw charter schools managed by for-profit companies, is that something a governor can do? And is Betsy DeVos ‒ U.S. Secretary of Education, bête noire of teachers unions and progressives and, yes, the driving force behind for-profit charter school expansion in Michigan ‒ personally profiting from Michigan charters?

We find Thanedar’s claims are mostly accurate, while noting they lack context on his ability to ban for-profit charter schools, and on any financial rewards reaped by DeVos.

As governor, Thanedar would have significant influence over the state’s agenda. However, it is not within the powers of a governor alone to change charter school policy — he would need the legislature to alter the law.

Currently, that body is solidly Republican and has been consistently supportive of the state’s charter school industry. Indeed, Michigan has the highest percentage of for-profit charters of any state in the nation.

Sarah Reckhow, an associate professor of political science at Michigan State University who specializes in education policy, said there are pathways a governor could take to enact this kind of change, but it would be a stretch. Universities authorize most charter schools, and the boards of trustees of most of those universities are appointed by the governor. So a governor who felt strongly about stamping out charter schools run by for-profit companies could exercise influence that way, she said.

But in the end, “‘outlaw’ implies law. And therefore legislation and therefore the legislature,” Reckhow said. “But there are potential ways that you could use other points of pressure in the system to try to reduce for-profit charter schools.”

Thanedar “intends to use every tool at his disposal as Governor to prevent charter school operators from reaping a profit off our system of public education,” Bucholz wrote.

As for the implication that Betsy DeVos profits from Michigan for-profit charters, that’s a little more complicated.

DeVos’s long history of promoting school choice in Michigan was a clear reason President Donald Trump chose her to serve as U.S. Secretary of Education. As it happens, being a cabinet member comes with a pretty great tax advantage, and carries a far bigger megaphone for spreading DeVos’s school choice philosophy. So if “profited” is interpreted simply as benefitting, her federal post would indicate she has, but that doesn’t appear to be what Thanedar is getting at in his tweet.

Bucholz said the DeVos family “owns and operates” the West Michigan Aviation Academy, offering that as an indicator Betsy DeVos has personally made money off charter schools.

“You can assume a for-profit school makes a profit, otherwise they wouldn’t be there,” Bucholz said. “We don’t know the financial details since the records of this school are ... private.”

As Bridge Magazine reported, the school was founded by DeVos’s husband, Dick Devos, with her encouragement, and has been ranked among the state’s top high schools, when adjusted for poverty, by Bridge’s Academic State Champs.

CS Partners is not publicly traded, so it’s not required to identify investors. Therefore, it’s hard to determine whether the DeVoses actually profit from West Michigan Aviation Academy.

Betsy DeVos said she would divest her assets in anything that would cause a potential conflict of interest during her time as Secretary. John Truscott, a spokesman for the family’s philanthropic efforts, disputed the suggestion that Betsy and Dick DeVos profit from the school.

Dick DeVos donates money to the academy and raises money to help support it, Truscott said, “But they certainly don’t receive any financial benefit.” Truscott said to his knowledge, the DeVoses are not currently shareholders in Michigan Educational Personnel Services or CS Partners, but that he doesn’t “know that for 100 percent certain.”

“Obviously they have a lot of financial holdings and I’m not familiar with all of them,” Truscott said. “I can tell you this is a school that is subsidized by significant philanthropic effort.”

Like traditional public schools, West Michigan Aviation Academy receives per pupil funding from the state. Unlike most schools, the academy received more than $4 million in donations from the DeVoses, and a private plane donated by Dick Devos.

Gary Miron, a Western Michigan University professor and expert in charter reform, offered another interpretation as to how Betsy DeVos may “profit” from charter schools. Rather than fund private schools or scholarships to achieve their ideological goals, as many affluent donors around the country do, Betsy and Dick DeVos have chosen to put their money into lobbying for legislative changes to the public education system, Miron said.

“They have to spend less of their private resources to get what they want because they’re leveraging access to public dollars,” Miron said. “They profit because they’re accessing the public revenues.”

Governors can enact significant change without the help of the legislature. But they can’t change laws by themselves. Thanedar’s spokesman rightly clarified the candidate’s statement by saying the campaign knows a governor needs the legislature to ban for-profit charters in Michigan.

Thanedar’s remarks on DeVos are more nuanced and harder to analyze. His campaign stands by the implication that backers of for-profit charters likely benefit, though in DeVos’s case maybe not in the way Thanedar imagined.

The opacity of privately traded education management organizations means there is no way to tell if the DeVos family directly makes money from the aviation school. A spokesman for the family says that’s not the case, and the candidate was unable to provide evidence that that is so.

Thanedar is on safer ground arguing that Betsy DeVos’s vast donations to like-minded candidates and groups that support for-profit charters, along with her elevation to education secretary, benefit her longstanding mission to expand school choice policies.