Amid protests over Trump, Muslims and guns, two enemies in Kalkaska bond near a giant trout

Quality of Life
Amid protests over Trump, Muslims and guns, two enemies in Kalkaska bond near a giant trout

KALKASKA – It’s hard to find common ground when the ground between groups is filled with speeding semis.

The liberal-leaning stood in the shadows of a 15-foot-tall trout statue along Cedar Street. One held a sign that proclaimed “Make Trout, Not Hate.”

The conservative-prone lined the other side of the main drag in Kalkaska, in front of a shuttered hotel sporting a “Pray 4 Trump” sign. One wore a shirt emblazoned with two words: “F--- Islam.”

Between passing tractor trailers, protesters and counter-protesters glared at each other, rainbow flags on one side, open-carry weapons on the other. Some hurled insults.

“Get a job!” a man in a leather biker jacket snarled toward the liberal contingent.

“I bet my job pays more than yours,” shouted back a woman holding a “No hate” sign.

It wasn’t your typical quiet summer night in Kalkaska, a village of 2,000 people east of Traverse City surrounded by miles of gently rolling farmland and white pine. Instead of the coffee shops and boutiques of its tourist-centric neighbors, downtown Kalkaska has the Kal-Ho Lounge, an animal clinic and a dollar store. Ernest Hemingway fished there one night in 1916, according to legend. There was a bank robbery in 1951. 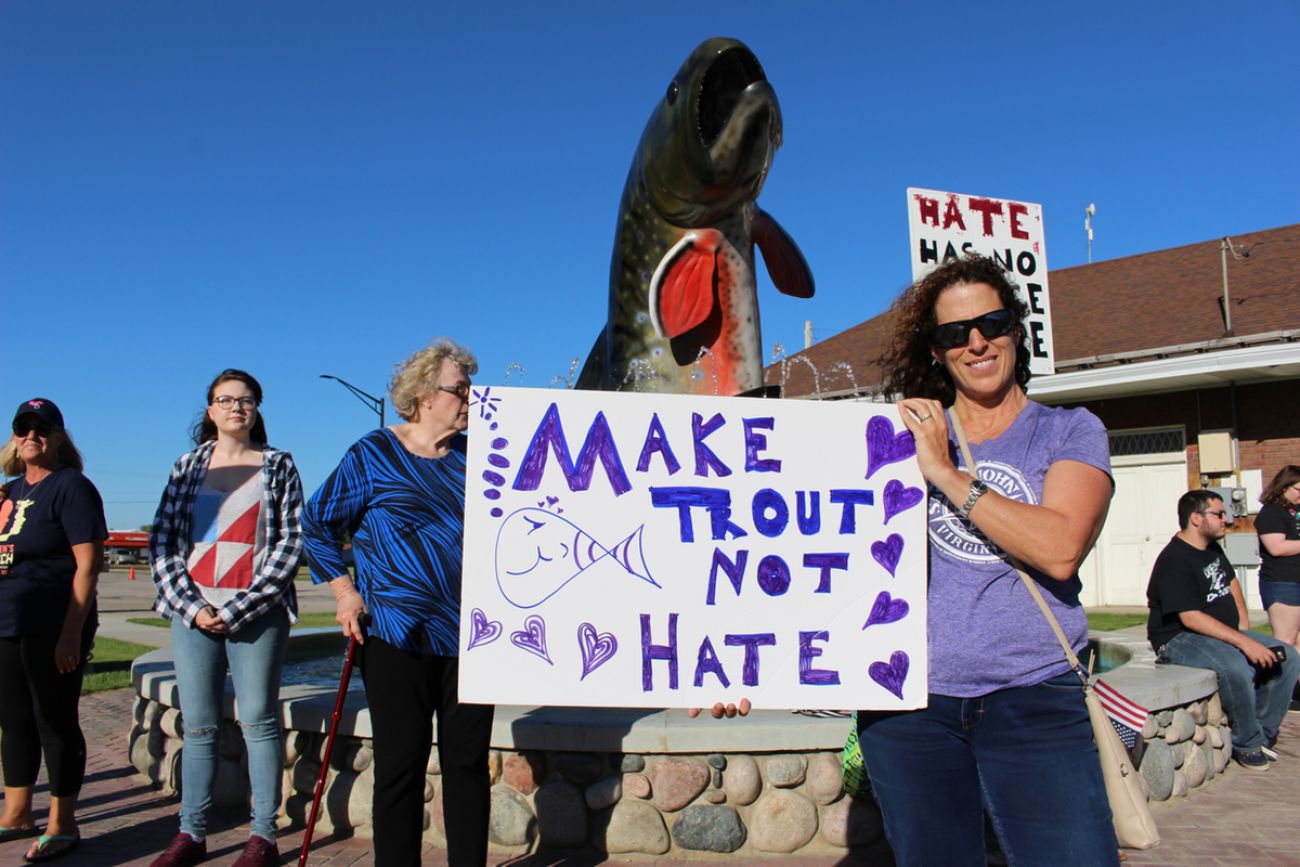 The 2016 presidential election deepened fault lines in Michigan. Bridge is running stories throughout 2017 in an effort to understand – and pierce – the political and cultural bubbles in which we too often live.

The village is known mainly to outsiders for its big trout statue. Recently, though, it’s been known for the kind of political discord people typically travel north to escape.

That controversy led to the discovery of some highly inflammatory Facebook posts the village president had either posted or shared on his public page.

One was a rant he shared, suggesting all Muslims should be killed. Another post, written by Sieting, suggested that if “you want a pet Muslim to make you feel all warm & fuzzy about yourself, go ahead and drag him into your home to stay.”

Yet another, referencing the Black Lives Matter movement, said, “Arm yourselves. It’s time to thin the herd of this crap.”

Sieting could not be reached for comment. But the village president previously told Up North Live: “I have a right to my opinion. If you don’t like my opinion, stay off my social media page.” 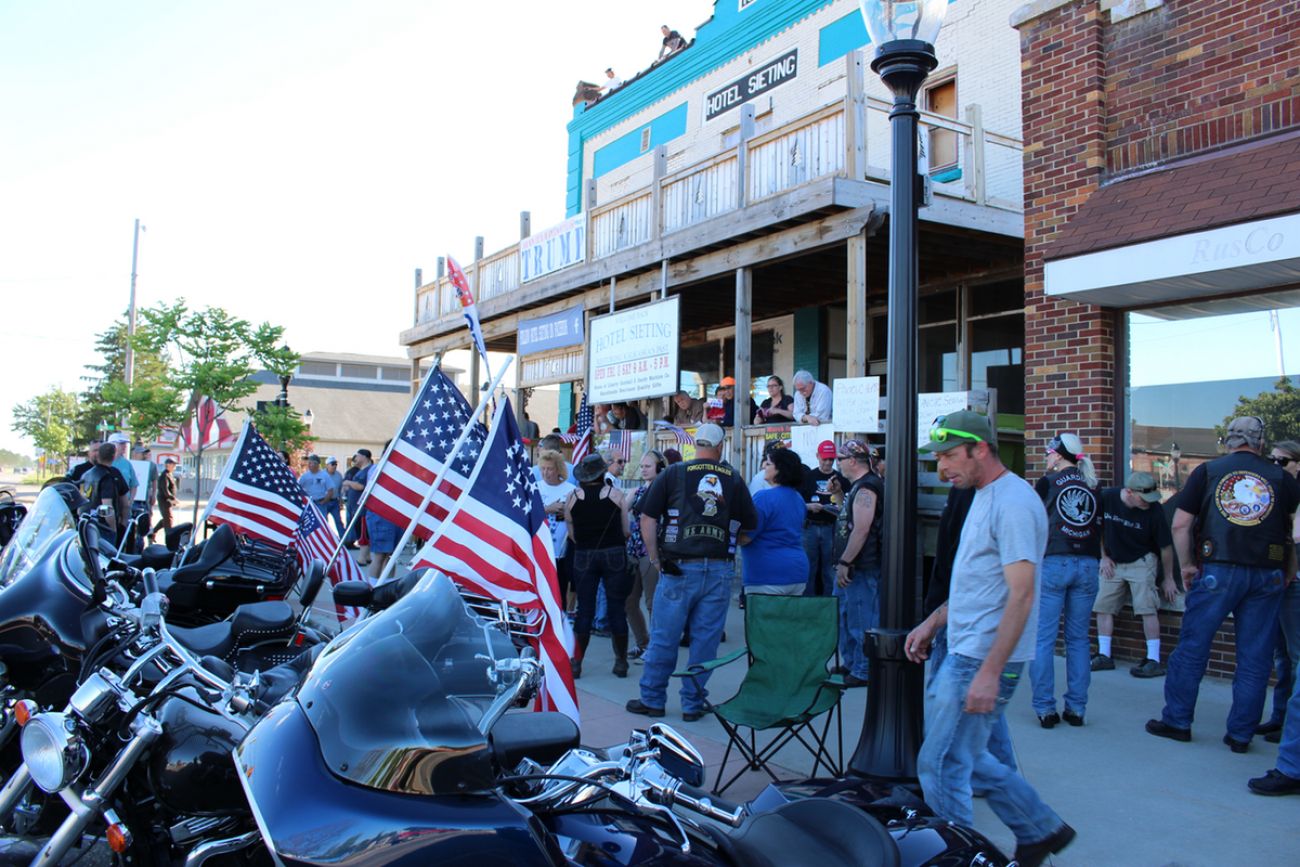 A group of residents organized a protest to demonstrate their disgust for Sieting’s posts. A counter-protest was quickly publicized. “Bikers Welcome,” the Facebook page for the counter-protest read. “Open carry – celebrate your 2nd Amendment Right!”

By 7 p.m. last Friday evening, about 100 people from the village and surrounding towns were on each side of Cedar Street.

As it turned out, many on the side of the street protesting Sieting’s social media posts owned guns (“I keep my freezer full,” said Katie McCleery). Many on the conservative side either didn’t know about Sieting’s Facebook comments, or didn’t agree with them. But those nuances ended up being proxies for the partisan gap exposed by the 2016 presidential election.

“I voted for Trump,” said Mark Rosenberg, a Traverse City home builder. “I’m surprised how the other side is treating him after we were patient with Obama for eight years.”

“There isn’t a stick long enough for me to touch Donald Trump,” said McCleery, who taught ceramics at the University of North Dakota before retiring in Northern Michigan.

Then somehow, amid the insults and rude hand gestures, Rosenberg and McCleery found each other.

Rosenberg had come to Kalkaska for the protest with relatives who live in the village and voted for Trump (as did seven in 10 Kalkaska County voters). An American flag leaning against his left shoulder, Rosenberg strolled over to the other side of the street. Others had crossed lines, too. Most stood tattoo-to-tattoo with their counterparts, expressing support or dismay with the president.

“It doesn’t do any good to stand over there and yell at people,” Rosenberg said. “No one hears you if you yell at them. They just yell back. It’s about being calm and trying to understand why they think like they do.”

McCleery had a similar attitude. “I try to find what we have in common,” she said. “We have an amazing ability to scare the shit out of each other.” 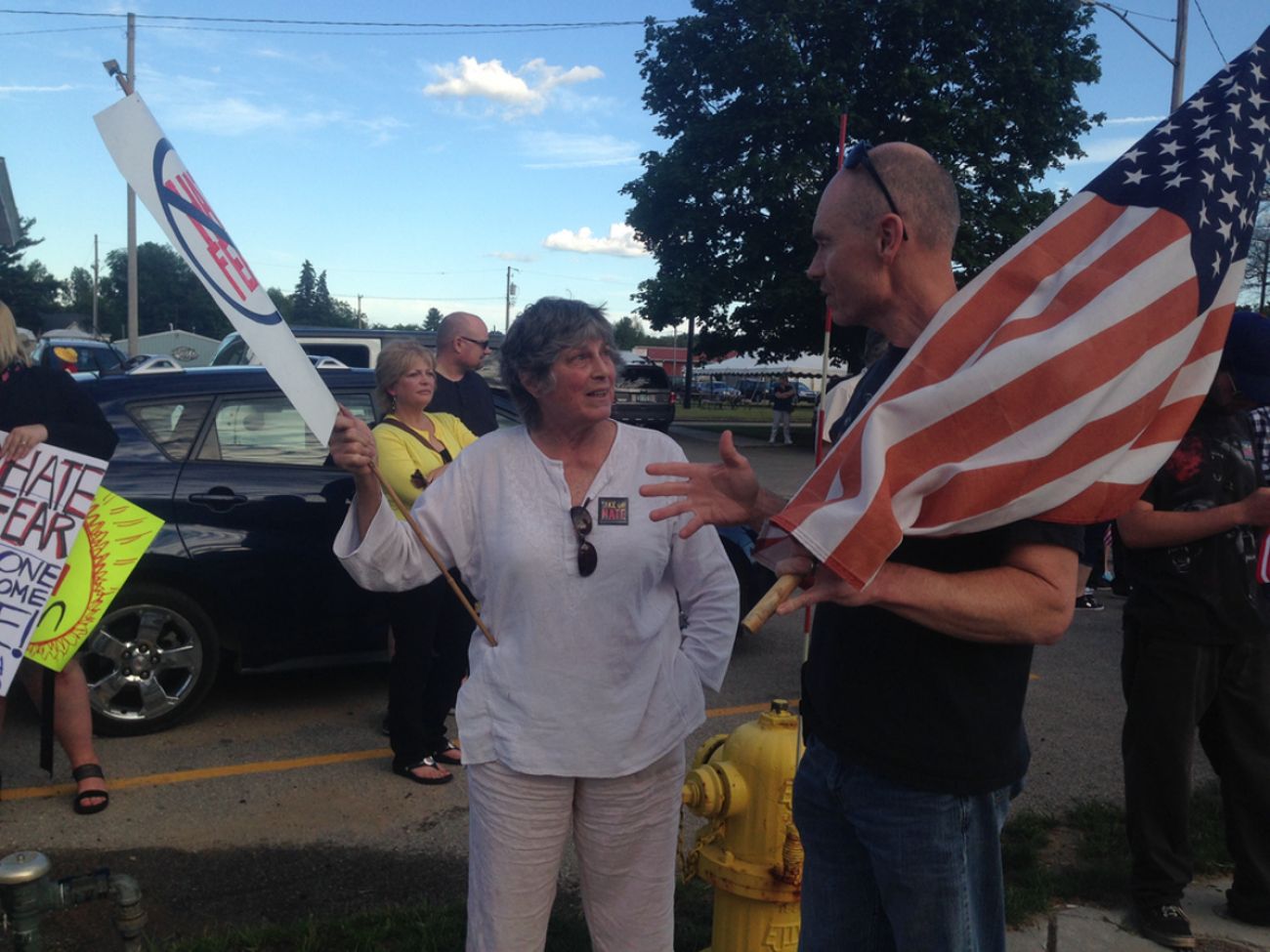 Rosenberg voted for Trump and McCleery for Hillary Clinton.

Rosenberg said he believed in gun rights, and McCleery said she had a rifle at home and if someone threatened her, “I’d drop them.”

“Don’t worry,” Rosenberg said, laughing and putting his hand on McCleery’s shoulder, “I’m not coming over.”

Rosenberg and McCleery stood close so they could hear each other over the revving of motorcycle engines and the shouting of fellow protesters.

Rosenberg said he didn’t realize the protest was about racist Facebook posts. “I don’t feel that way,” he assured McCleery.

“We don’t share the same facts,” McCleery said. “If I believed the same facts they do,” pointing to the other side of the street, “I’d be over there."

The pair shook hands and parted. Rosenberg struck up a conversation with another protester near the trout statue. A big man in a leather motorcycle vest asked if he could get a hug from McCleery, and she obliged.

“Why don’t you respect our president?” the motorcycle man asked, and walked away.

McCleery gazed across Cedar Street. “It bugs me,” she said, “when people just label me and they don’t even know me.”