Albion lost its high school; students did better. Is Benton Harbor next? 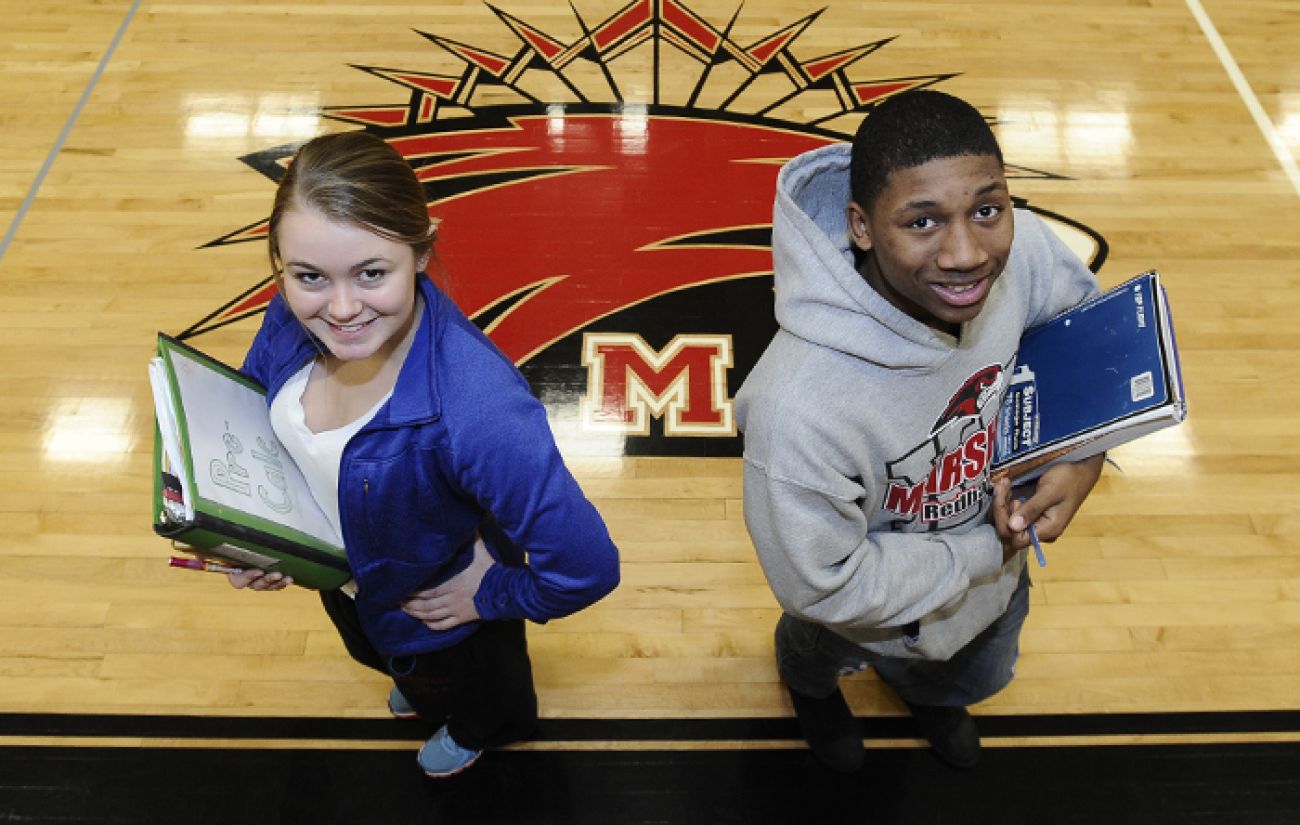 A poor, majority-black high school with low test scores in a district drowning in debt.

But in 2013, it was Albion, a similar-size community in mid-Michigan facing the same troubles and fighting the same possible outcome – the closing of the city’s only high school.

Both proponents and critics of the plan to now close Benton Harbor High School can point to the legacy of the Albion High closing to buttress their arguments.  Graduation rates for students who live in Albion have gone up substantially since they began being bused 13 miles to Marshall High School; Albion students are now graduating at rates well above the state average for African-American students.

But the 2013 closure of Albion High School and conversion of Albion’s schools to a K-8 district, billed as a way to save the lower schools, didn’t work. Three years later, in 2016, facing a growing exodus of students out of the district after the high school closed, Albion voters agreed to dissolve the district and allow Marshall Public Schools to annex what was left of the schools and its students.

“I appreciate what Benton Harbor is going though; it’s a tenuous, divisive issue as you can imagine,” said Albion Mayor David Atchison. “Schools generally don’t close because we want to get rid of the schools. In the end, every community needs to look at what’s best for the children’s education.”

Gov. Gretchen Whitmer has recommended Benton Harbor High School be closed, both because of staggeringly low academic achievement, and to help address an $18 million district deficit. The state wants Benton Harbor to convert to a K-8 district, and allow its high schoolers to attend one of at least 10 traditional and charter high schools in the region.

Whitmer gave the Benton Harbor School Board until this Friday, June 14,  to approve the plan, or risk having the entire district dissolved by a vote in the Republican-majority Legislature. The board has vowed not to even take a vote on the proposal.

Concerns raised at a series of public meetings in Benton Harbor ‒ the community’s desire to keep their local school and about whether Benton Harbor’s mostly African-American, low-income students would be accepted in wealthier, whiter school districts ‒ mirror those expressed in Albion in 2013.

Buena Vista Public Schools in Saginaw County and Inkster Public Schools in Wayne County were dissolved in 2013, with students sent to surrounding districts. The Michigan Department of Education says it has no data analyzing the academic performance of former students of those dissolved districts in their new schools.

The performance of Albion students has been tracked by Marshall Public Schools, however. So far, Albion students, who in general had struggled academically in their home high school, are doing better in Marshall.

According to data analyzed by the district, 94.3 percent of Albion high schoolers who attended Marshall High since the Albion collaboration began in 2013-14 have graduated or are on track to graduate at the end of four years of high school. That’s just slightly below the overall graduation or on-track rate of 97.4 percent at Marshall High School, said Marshall Superintendent Randy Davis.

But it’s a huge gain from grad rates in their old school building. In its last four years, Albion High School had graduation rates of 67 percent, 58 percent, 84 percent and 80 percent.

Among Albion-residing African-American students who switched to Marshall, 96.8 percent of females and 94 percent of males have graduated or are on track to graduate.

Across Michigan, the graduation rate in the 2017-18 school year for black females was 76 percent; for black males, 64 percent.

“You would think that we would succumb to the same pattern that the state has done,” Davis said. “Frankly, it’s surprisingly and gratefully much higher. I think we’re beating the odds.”

That success may be partly because of an intense effort to gain community and student buy-in for the high school merger, Davis said.

Marshall and Albion had a series of community meetings in the months leading up to the move, including a bonding weekend for students from both schools hosted by Albion College. Albion students were greeted on their first day at Marshall High School by the schools’ marching band.

But after seven months at Marshall, Gardenhire and her daughter Tamiyah, a freshman in 2014, were converts. “The teachers are great,” Felicia Gardenhire said at the time. “The parents are great. She’s making lots of friends.”

One notable difference between the Albion experience and the possible future of Benton Harbor, though: all Albion high schoolers were bused to the same new high school. In Benton Harbor, students are likely to be dispersed among at least 10 schools.

Critics can also point to the fact that after Albion High School closed, enrollment at the elementary schools and middle schools plunged, dropping from 577 in 2013-14, the first year after the high school closed, to 454 two years later. Hemorrhaging students and the about $8,000 a year each student brought in state per-pupil funding, the district was forced to cut art, music, physical education and technology, Davis said.

By 2016, Albion voters faced a ballot issue asking if the school district should be annexed by Marshall Public Schools. The ballot issue passed with 71 percent of the vote.

Marshall Supt. Davis warned against drawing too tight of a connection between the closing of Albion High and the closure of the rest of the district.

“They had a great K-8 model,” Davis said of his counterparts in Albion at the time. “Their problem was the devastation of school of choice from other districts. They had 55 students leave the district in one swoop when a charter opened.

The same thing could happen in Benton Harbor, where parents could decide that if their children will have to leave the district for high school, they might just as well start them at another district in elementary school.

There is still one traditional public school elementary physically operating in Albion. Harrington Elementary, which had been an Albion Public Schools’ elementary, is now overseen by Marshall Public Schools with a Marshall staff. The switch in control hasn’t yet led to improved test scores in its first two years.

“Everybody would like to have our own school system; but there’s many challenges with that,” said Albion Mayor Atchison. “At this point, the majority of people, knowing what we know now, would see (sending their children to Marshall) as a positive.”

Back in Benton Harbor, officials and residents say they plan to hold a protest in Lansing on Tuesday. Whitmer will meet with Benton Harbor Mayor Marcus Muhammad Tuesday afternoon.

Atchison, the Albion mayor, has seen it all before, and suggests Benton Harbor consider a similar course.

“My message to Benton Harbor would be: What is most important is the educational opportunities that will be available to the students,” Atchison said. “If the school is failing, changes need to take place. It’s the student education that must come first.”