“Push” by Sapphire and “Red, White and Royal Blue” by Casey McQuiston were both deemed inappropriate for high schoolers while other books are still being reviewed or allowed to be kept on library shelves, the district announced at a school board meeting Monday evening with about 60 people attending.

“Push” is an intense novel about a 16-year-old Black girl who is raped by her father and assaulted by her mother and later finds her voice with the help of a sympathetic teacher. It was later turned into the movie, “Precious.” “Red, White and Royal Blue” is about a romance between the U.S. president’s bisexual son and a gay British royal, both in their early 20s. The book has some sex scenes and coarse language.

But the district’s announcement did little to quell most of the speakers at last night’s meeting, who continue to say the district is not doing enough to protect children.

Dearborn joins a list of public school districts that have faced community members objecting to a number of books with LGBTQ or sexual themes, arguing they are inappropriate for children. Speakers Monday repeatedly said their concerns were not that the books contained LGBTQ characters or information. But at a board meeting last month several speakers decried the books under debate as pornographic or incompatible with their religious beliefs and several LGBTQ speakers were repeatedly being booed when they argued the books were important to making marginalized students feel heard.

In addition to the two books being removed, the district said it is moving the book “Eleanor and Park” by Rainbow Rowell from middle school libraries but will allow it to remain on high school shelves. The novel is about a romance between two 10th-graders. The girl lives with domestic violence at home and both teens struggle with traditional gender roles. The novel contains profanity.

The Monday meeting drew a far lower crowd then the approximately 600 people who attended a meeting last month, which also included Republican candidates running for secretary of state and attorney general. Those who did show up Monday said they plan to continue attending meetings until they get their way. 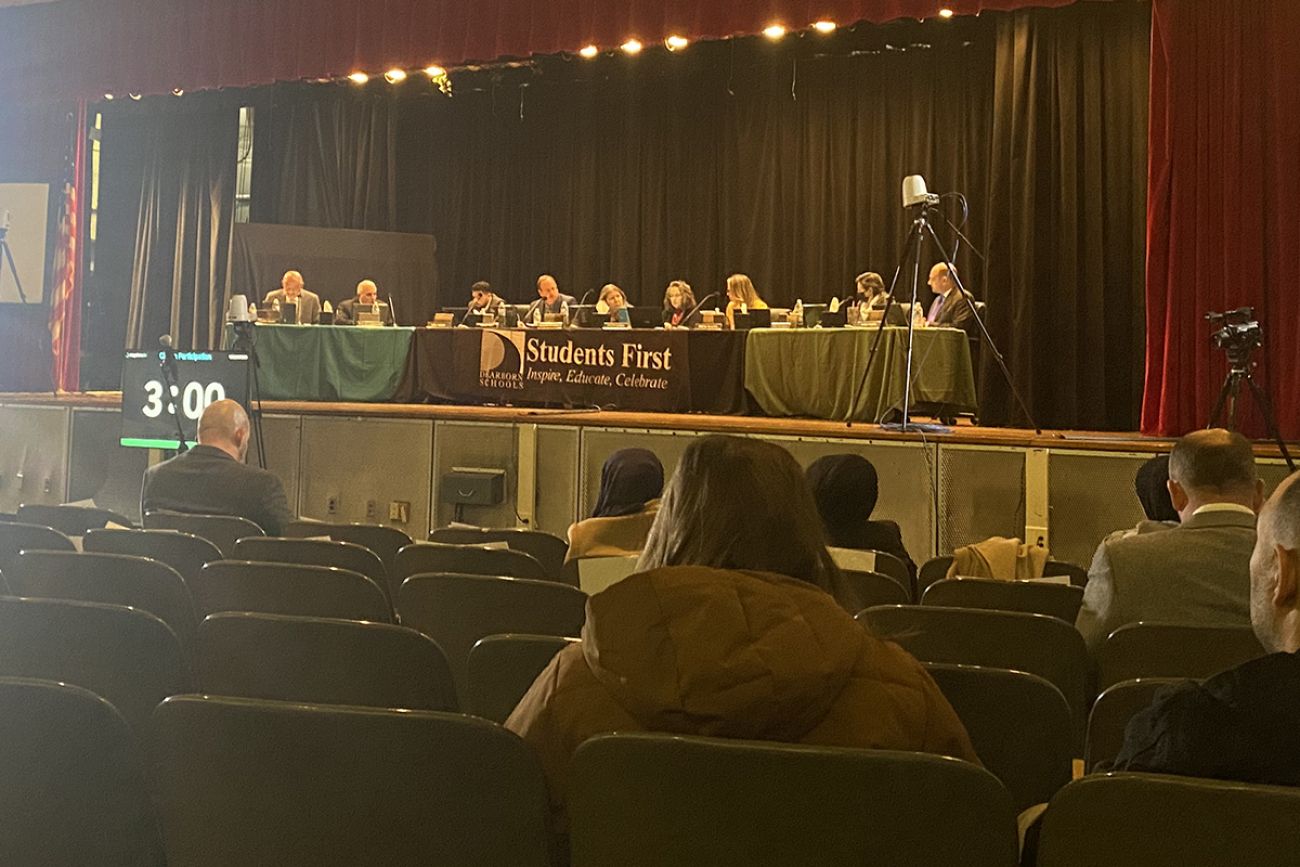 Dearborn Public Schools President Roxanne McDonald had to repeatedly tell attendees to be quiet when they interrupted speakers or board members at Monday’s board hearing. (Bridge photo by Isabel Lohman)

“You can’t just come tell me here ‘oh we did review the books and we figured out two books will be banned and the rest will not, the rest will not be banned,’”  Abdulnaser Alnajjar, a parent of one district student, said during public comment.  “I’m, as a parent, hold the right to understand every single step that was taken to make this decision. I can’t just come here and then listen to you just make those decisions.”

Another speaker said to the board “we should fire your ass,” which was met with cheers.

How broadly such views are shared in the community remains in question. In last week’s board elections, Dearborn voters chose to re-elect two incumbents to the school board, while Stephanie Butler, a Dearborn parent who has been a prominent voice in the parental rights movement, launched an unsuccessful write-in campaign for a board seat.

According to election data, the city also chose to re-elect Gov. Gretchen Whitmer rather than Republican candidate Tudor Dixon, who ran on a parental rights platform and was critical of how schools selected reading material. But Whitmer’s margins in the city were thinner than in 2018.

During the campaign, conservative candidates and parents groups in Michigan and across much of the country criticized schools that allowed books they deemed inappropriate in libraries. Dixon at one point proposed a ban on what she deemed “pornographic” books in schools and used Dearborn as an example of parents being upset about public education.

Jenin Yaseen spoke at the board meeting Monday about the importance of “affirming all members of our community, not by restricting access” to LGBTQ content. She works with the group For the Binat, a group whose Instagram page describes its mission as “Arabs and Muslims mobilizing the community to confront the Patriarchy in Dearborn.”

“Access to identity-affirming histories and education is vital to marginalized students' survival and sense of belonging,” she said.

Board member Hussein Berry told people attending the meeting that he hears their concerns but must ensure the district does not break laws in the process of addressing concerns about books.

“At every level, local, state and federal parental rights are the most important rights…so we respect them, but at the same time, we have to work within the law. We can't allow people to judge other people, judge books at the expense of others,” he said.

The district also released final guidelines of its book review procedure on Monday. The guidelines are available in both English and Arabic.

If the parent is not satisfied with the decision, they can submit a form for a different committee to look at the book. The committee would include three parents and/or community members, three teachers and/or media specialists, one administrator, one social worker/school psychologist and one student.

The parent who filed the complaint cannot be a part of the committee for that specific book. Members are expected to read the book and the committee will hold an anonymous vote to determine the book’s future.

Dearborn already allows parents to opt their children out of checking out a specific book or all books.