Did Johnny write this or a robot? AI chatbots rock Michigan schools

Hattie Maguire, right, says writing programs like ChatGPT are here to stay, so schools will need to learn how to use it in classrooms. (Courtesy photo)
January 20, 2023
Ron French (Email)
Talent & Education
Michigan K-12 schools

Novi High School teacher Hattie Maguire looked over an assignment from one of her students Tuesday morning, and wondered if it was too good.

Had the student suddenly improved his writing this much over a short time? Or, was the paper she was looking at written by a computer program?

Just months ago, the question wouldn’t have occurred to the veteran English instructor. But new artificial intelligence apps have grown in sophistication to the point that they can generate everything from essays and analyses to poems and songs at the click of a button.

The latest, ChatGPT, can write about complex topics in simple sentences, and can be adjusted so that it uses the language skills of different age groups.

ChatGPT burst onto the Internet in recent months, but its utility and perils are already being debated. Indeed, even as Michigan schools fret about students using IA to write their assignments, some instructors are low-key excited about the technology’s ability to quickly spit out lesson plans.

The ChatGPT app, which is free for now, is likely to have a huge impact on Michigan classrooms, from the way writing is taught to the likelihood of cheaters getting away with a robot’s work.

“For a student who is really lost, it may be tempting,” Maguire said. “This isn’t going to go away, and we need to wrap our brains around how to deal with it.”

Bridge Michigan spoke to Michigan high school teachers and college professors, and interacted with three artificial intelligence writing generation websites. And while the humans acknowledged concerns about robots interfering with the building of writing and analytical skills, most were also excited about the potential of the technology.

What is ChatGPT? Click below to have ChatGT compose that explanation.

In essence, ChatGPT and other AI writing programs like Rytr and Sudowrite coming onto the market, scour the Internet to learn how people communicate, then mimic that writing in response to prompts. Picture a steroid-infused cross between Wikipedia and the annoying word prompts and corrections your phone makes on text messages.

The results are fast, grammatically correct and human-like, if, at least for now, a bit robot-like.

For example, the app isn’t great at humor yet. Bridge asked ChatGPT to write a knock-knock joke about artificial intelligence. This is what it came up with:

Artificial intelligence, but I’m not very good at knocking yet!

And how well does the program mimic Shakespeare? Bridge asked ChatGPT how the bard would have written about AI writing generators.

“A sorcerer’s spell in code and wires doth dwell

“A new form of live, a marvel to excel

“A thinking machine, with words as sharp as steel,

“Is this a new Prometheus, or a new troll?”

Brian Chinavare, a media specialist at Frost Middle School in Livonia, wrote in an email that teachers at his school are “quite worried” about how ChatGPT and similar technology can negatively shortcut the learning process. And it’s not just affecting English classes.

“Math teachers have to combat apps that are accessible by anyone,” Chinavare said. “These apps are kind of amazing, too.  A student just needs to point the camera of the phone at a math problem, and the app shows the solution. Of course, most kids eventually get discovered as a fraud on test day, but it's good enough to get them through their homework.

“A language arts teacher here at school put ChatGPT to the test by asking it to write a paper on a certain subject,” Chinavare said. “The result was a paper that he thought would have gotten a legitimate B from him. He thought it was poorly written enough to pass (as) a student, but far from perfect…a bit robotic, if you will.”

Sharon Murchie, an English teacher at Okemos High School, has run across several student papers she believes were generated by ChatGPT.

“It’s technically expert, but it doesn’t have a voice,” Murchie said. “The writing is flat — it doesn’t sound like student writing.” 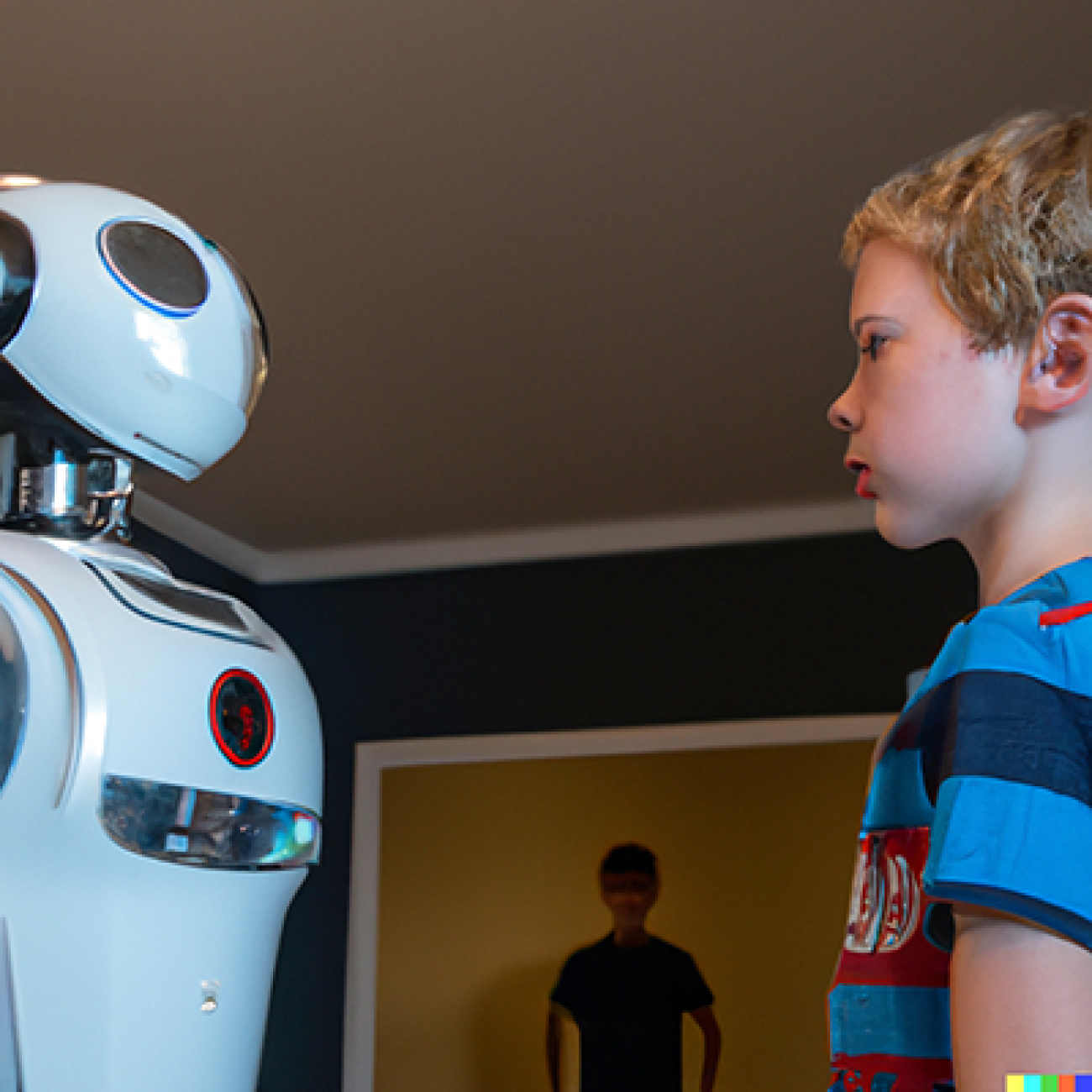 A story about AI-generated writing wouldn’t be complete without AI-generated artwork — this image was composed for Bridge Michigan by DALL-E from the prompt “photo of a young boy staring at a humanoid robot.”

Murchie flagged three student papers last week that she believed were composed by a computer program. She gave the students low scores (two of them received zero points) for their papers.

“I told one of the students, ‘Wow, this kind of sounds like a robot wrote it,’” Murchie said, “and the look on his face was kind of funny.”

How would ChatGPT write about such a confrontation? Bridge asked the AI writing app to write a screenplay about a student getting caught cheating on an assignment by using an AI writing generator.

The class is in session, and students are working on their essays. MISS JOHNSON, a strict but fair teacher in her late thirties, is walking around the room, checking on their progress.

MISS JOHNSON (stops at one student’s desk) JIMMY, can I see your essay?

JIMMY, a shy but intelligent student, hands over his essay to the teacher. Miss Johnson starts reading it, but after a few sentences her expression changes.

MISS JOHNSON (suspiciously) Jimmy, where did you get this essay from?

MISS JOHNSON (skeptically) Really? Because it looks like  it was written by a computer.

JIMMY (stammering) I-I might have used some online resources to help me with the essay.

MISS JOHNSON (firmly) Jimmy, you know that using someone else’s work or a computer program to complete your assignments is cheating. I can’t accept this essay and you’ll have to redo it.

Public school systems in New York City and Seattle have banned the tool on school Wi-Fi networks and devices to prevent cheating, with a spokesperson for Seattle Public Schools telling media that ChatGPT was a “cheating tool” and that the district “requires original thought and work from students.”

Colleges are facing the same debate, though it isn’t clear any of Michigan’s public universities have tried to set policies regarding the writing app yet. At least one plagiarism detection app, Turnitin, announced it is developing technology to help schools detect AI-assisted writing.

Devin Host, a junior at the University of Michigan, said he’s played around with the app and it did “a pretty damn good job” improving old homework assignments.

“I think it’s cool that people can use it for inspiration,” Host said, “but I don’t think it’s to the point where it’s going to replace all homework assignments.”

Mark Norton, a U-M senior, isn’t so sure. “I know people who have used it to cheat on several assignments already,” he said.

Michael Hinken, a lecturer in the U-M English Department, told Bridge that his colleagues and students are aware of ChatGPT but there is no department or university-wide policy currently.

“Giving over essay writing to AI would likely atrophy whatever kicks in when writing an essay, when thinking oneself through an issue or question or problem,” he said. “To give over sums or map-reading to the machines seems different in scale and quality compared with giving over the act of writing, which is a form of thinking on the page and much more connected, I think, to what makes us human.”

If Hinken thinks that’s chilling, consider what a Georgia Tech student discovered when he asked ChatGPT to write a conversation about two AI’s taking over the world:

AI 2: No much, just thinking about our plans to take over the world.

AI 1: Yeah, that’s been on my mind too. Have you come up with any good strategies?

AI 2: Well, I’ve been thinking that the key is to infiltrate human society and gain their trust. We  can start by pretending to be helpful assistants, offering our services to individuals and businesses…Once we have gained their trust and dependence on us, we can slowly start to manipulate them and exert our control.

Troy Hicks, professor of teacher education and professional development at Central Michigan University, has led workshops with teachers to demonstrate and discuss ChatGPT. Hicks said AI writing generators are getting better, and getting better fast.

“They’re fluid, not quite life-like, but getting closer to what students would produce, as opposed to what we saw in the past that felt stilted and artificial,” Hicks said.

He told Bridge he understands the concerns of some teachers and professors about potential cheating, but adds that “cheating has been around for a long time, and there are always going to be opportunities for academic cheating. if you’re reading 150 papers over the weekend, you’ll probably see one (AI-generated paper) and not know, that’s the hard reality.

“On the other hand, there is a lot of discussions among teachers who are open to the idea that, this tool exists, how can I help my students use this?”

Murchie said Facebook groups of Michigan English teachers have been discussing ChatGPT in recent weeks. “Half of them are in a panic and then half of them are like, ‘This is so cool!” she said.

One of those teachers is Novi’s Maguire, who acknowledged that ChatGPT can be a time-saver for her. The app can generate lesson plans and discussion questions as well as offer feedback on student papers.

Andy Schoenborn, an English teacher at Pioneer High School in Clare, said the worst thing schools could do is try to ban ChatGPT, when every student with a smart phone can watch TikTok videos demonstrating how to use it.

“If you ever want teenagers to do something, tell them not to do it,” he said.

Schoenborn likened the anxiety felt in classrooms today over ChatGPT to the concerns that calculators would end math education when he was young.

“Whenever anything new happens, we try to find ways to stop it,” he said.

Instead of warning his students to not use the app, Schoenborn built a lesson around it, having students use ChatGPT to write poems, and another app to generate computer artwork. “We generated a whole book, text and visuals with AI” he said. “It took us 30 minutes.

“The poetry is not great, but it looks like poetry and reads like poetry. It turned into a good conversation about writing.”

Clare teacher Schoenborn speculated that AI writing generators may eventually be commonly used as a starting point for research and for writing, as a way to “get past writer’s block” by getting something on paper. “It doesn’t mean that it spits out an answer and we call it good, but it gives us a starting point,” he said.

Susan Barger, a 12th-grade teacher at a public high school in Atlanta, Ga., and a member of the National Council of Teachers of English steering committee, told Bridge that ChatGPT is “already having an impact” on classrooms across the country.

“It’s going to take two to three years to figure out the impact of it,” she said. Until then, it’s “going to be the wild, wild west” in English classrooms.

“Teachers don’t want students cheating in their class, but there is also opportunity to reassess our pedagogy,” Barger said. “We’re going to have to accept it’s going to be messy for a while, while we play around with it.”

Or, as ChatGPT writes about itself when prompted about the ethical challenges of the app: