If Michigan schools are going to face budget cuts because of the pandemic, low-income students should be spared, says an education advocacy group. (Bridge file photo)

Low-income and special needs children should be spared from the potentially devastating funding cuts Michigan schools may face in the 2020-21 state budget, according to a report released Tuesday by Education Trust-Midwest.

The group is making a pitch to Gov. Gretchen Whitmer and 148 state legislators who will soon negotiate an anticipated $1.1 billion shortfall in the state’s School Aid Fund caused by increased costs and plummeting tax revenue due to the coronavirus pandemic.

With that large of a budget hole, it’s unlikely that schools will be spared, said Amber Arellano, executive director of Michigan-based education advocacy organization. The group’s report calls for schools in affluent communities to bear the brunt of those cuts and spare schools where classrooms are filled with low-income and special-needs children and English language learners.

In the past, school budget cuts have tended to be across the board, with the state cutting the per-student foundation grant. Equal cuts for every student disproportionately hurts low-income schools, because low-income schools, on average, receive less state and local money than higher-income schools. Michigan is in the bottom five states for funding gap between poor and wealthy districts.

“We know there are pragmatic things we can do to protect the most vulnerable students from the most drastic budget cuts,” Arellano said in a news conference Monday.

Michigan schools receive the bulk of their state funding through per-pupil payments, which are roughly the same for most schools. But school districts also receive funding from local taxes, and a handful of districts get extra money based on an agreement made when the current school funding model was developed in the 1990s.

The result: Even though per-pupil funding is similar between school districts, the total pot of money schools have to work with varies quite a bit.

The previous largest school budget cut was in 2011, when the state shaved $470 off per-student funding. School leaders worry this year’s cut could be worse.

Using a $470 per-pupil funding cut as an example (which would be a cut of between 5 percent and 6 percent of the about $8,000 per-student funding, or $685 million total) the report offered models for proposed cuts. In one, the state’s wealthiest districts (with under 26 percent of students considered economically disadvantaged) would get the equivalent of a $764 per pupil cut, while the poorest schools (over 74 percent economically disadvantaged) would get a $147 cut.

The idea is to make the cuts equitable, rather than equal, said business leader Mike Jandernoa, founder and CEO of 42 North Partners, an investment company, and a board member of Talent 2025, a west Michigan association that focuses on improving schools and entrepreneurship opportunities. Jandernoa was one of several community and school leaders who spoke Monday in support of low-income schools being spared from the budget ax.

At the Monday news conference, Jandernoa said his company has had trouble over the past decade finding high school graduates with the academic skills needed to complete tasks.

“In other states where we have employees, that’s not the case,” Jandernoa said. “They are not declining.”

“Michigan needs a skilled workforce to ensure a strong, prosperous economy, and that means we need to give every student equal access to opportunities for a successful future,” Jandernoa said. “Our state’s leaders must commit to an equitable education funding system that helps close the gaps between Michigan’s wealthy and poor districts and supports our most vulnerable children.”

Education Trust is one of several education advocacy organizations that have called for a weighted funding formula that provides for more money for students with more needs, similar to formulas used in high academic-achieving states such as Minnesota and Massachusetts.

“We think this is exactly the moment to call on lawmakers to shield the most vulnerable students from budget cuts,” Arellano said. 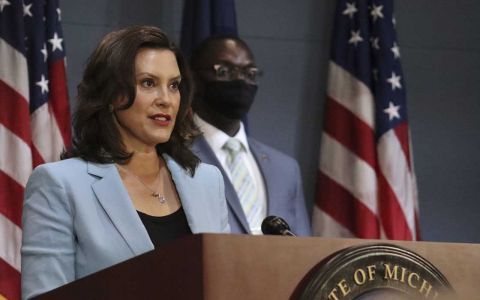 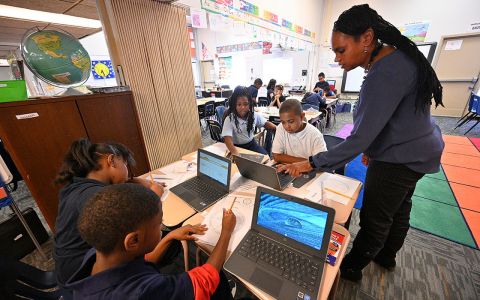 Michigan schools lean toward returning kids to classrooms amid coronavirus

Students may wear face masks and may eat lunch at their desks, but the majority of Michigan schools that have announced plans for the fall are planning to offer families the option of full-time, face-to-face instruction.

Big money for big corporations that don't need it, but cut funding for our most vulnerable.

The only way to be fair and equitable in the budget cuts is to make it equal. Every district should have the exact same percentage cut from their budgets. Anything else is the state picking winners and losers.

Schools want more money, but wait! Since schools will be cutting out sports programs (which are a huge expense), drama performances and other large group gatherings they should have money extra in their budgets. If classes are cut, kids don't show up then cut back on teacher salaries.

Schools in Mi. get the same amount per student, it MUST be left to that formula. NO picking winners and losers!

Mr. Jandernoa seems to be like all other education knowledgeable people, when they speak education they equate it to money they never talk about the students and their role/responsibilities in the learning process, they never talk about new approaches or successful practices they on ask for more money, they never talk about the learning process the only only equate education to money. They seem to presume that low family income seems to indicate academic capability.
If you want my support for added money, I need to hear what will be changed and how it will improve the academic results. I would not invest my money in an organization that is investing in itself for continuous improvement, nothing in this article suggest that anything will change and all the spending will simply deliver the same old results that everyone seems disappointed in.
I wonder if Mr. Jandernoa were to apply 42 North Partners investing principles to Michigan schools if he would invest his money in all Michigan schools or he would select a few 'great' ones and try to leverage their practices to all the rest. Or more importantly learn from the students what makes them successful and apply that in all the other schools.