He loved teaching math in Michigan. Then he quit to manage a Chick-fil-A.

Talent & Education
He loved teaching math in Michigan. Then he quit to manage a Chick-fil-A. 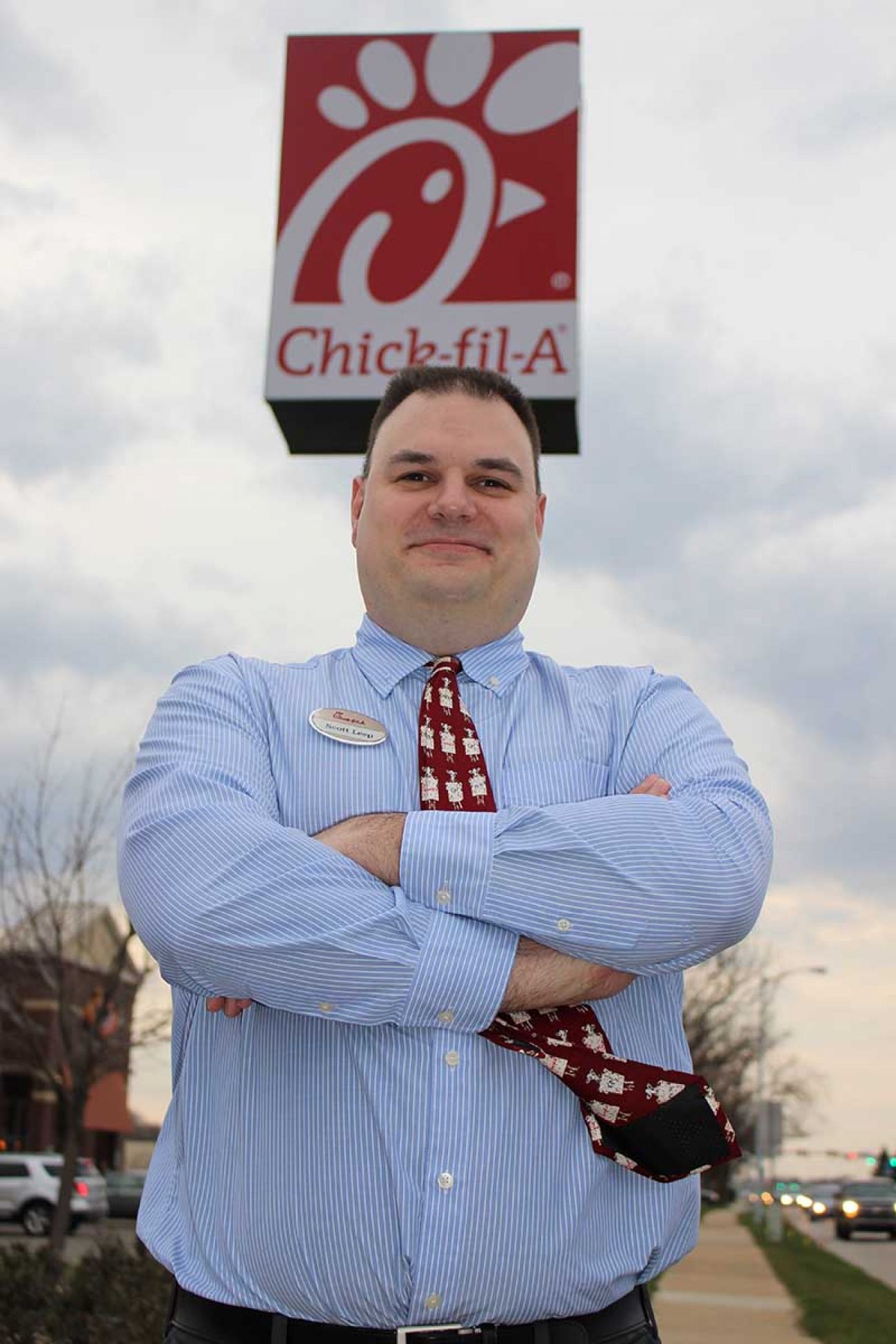 PORTAGE - Scott Leep stood, arms crossed, smiling at a line snaking from the cash registers to the back of the fast food restaurant. A high school baseball team had just tumbled out of a bus, and two dozen boys in dirty uniforms and cockeyed caps jostled to assess the brightly lit menu: chicken sandwiches, chicken nuggets, chicken strips, salads with chicken.

A year ago, Leep was spending his days with kids like the ones in line, teaching math and English at a tiny country school in Southwest Michigan.

“I loved teaching,” Leep said. “I loved being part of their lives, watching them figure out who they are.”

Today, he is general manager of a Chick-fil-A, serving up waffle fries instead of pop quizzes.

How the 38-year-old went from teaching the Fibonacci sequence to breading chicken is a story particular to our age. It’s definitely a glimpse into Michigan economics – he makes more as a rookie general manager at the fast food restaurant than he did as an 11-year veteran teacher. More than that, though, it’s a window into the struggles of teachers – and of schools to keep educators from abandoning ship.

Leep was one of 7,241 Michigan teachers – one in 12 - who left education in the 2016-17 school year. Some retired, but a national analysis estimates that two-thirds of teachers who leave the classroom do so for other reasons. If that estimate holds true in Michigan, about 80 school buses of non-retiring teachers call it quits per year.

“Every single teacher that has left us, it is a tough decision for them,” said Doug Newington, superintendent of Climax-Scotts Community Schools, where Leep was a popular teacher until quitting last June.

“But when it comes down to it, you have to look at the profession and which direction it’s headed.”

Leep earned his teaching certificate from Western Michigan University, and took a job at Climax-Scotts Junior-Senior High in Kalamazoo County, in 2006. With dual teaching certifications in math and English, he taught both subjects to kids in middle and high school. He volunteered to teach night school and was an assistant football coach.

There was a job satisfaction that came with influencing young people’s lives that went beyond a paycheck. Then again, satisfaction didn’t pay the bills for his growing family. After 11 years and a master’s degree, Leep was earning about $50,000 a year to support his wife and two children. In early 2017, Leep decided to apply for a part-time job at a Chick-fil-A opening in Portage.

“The manager looked at my application and said, ‘Why do you want to work here?’” recalled Leep. “I told him, ‘Honestly, I need a second job. I need the money.’”

For four months, Leep caught a ride with a friend at 5:30 a.m. each day  from his Kalamazoo home to get to Climax-Scotts Junior-Senior High School, where he’d discuss the novel “Brave New World” one hour and linear programming the next.

He worked in the kitchen, breading chicken breasts in a flour mixture and frying them in peanut oil in a pressure cooker.

Last June, Leep was offered a full-time position as general manager at the restaurant. He left the chair and the school supplies he’d paid for himself in his classroom of 11 years, and walked away from teaching.

Michigan’s teacher turnover isn’t unusual. The state was slightly below the national average for educators leaving the profession in 2012-13, the last year national data was available. And the rate isn’t increasing: the same percentage of Michigan teachers left the classroom in 2004-05 as in 2016-17.

Still, when one in 12 teachers leaves every year, it stunts learning. In general, teaching skills increase for at least the first five years a teacher is in a classroom. Veteran teachers like Leep often are replaced with teachers straight out of college. Students typically learn more in the classrooms of veteran teachers.

What could keep an experienced educator like Leep in the classroom?

More money would help, but Leep said it wasn’t the biggest factor. Michigan is 12th in the nation in average teacher pay ($62,000), but teachers like Leep who worked in rural districts often are paid substantially less.

“It was a raise” to move from teaching to Chick-fil-A, Leep said. “But for me, (leaving teaching) wasn’t the pay or my colleagues or my superintendent. I loved teaching.

“It was the politics,” Leep said.

“You get politicians in Lansing who have never been in a classroom telling me I have to teach a certain way. And every few years, things would change. When you go from one testing idea to another testing idea and then back to the first, it’s the definition of insanity.”

Leep said he grew frustrated being given the same standards for all students, and students are all judged on the same tests, like the girl from the broken home and the banker’s son are as interchangeable as the cuts of poultry Leep’s workers prepare each morning.

At Chick-fil-A, every chicken breast weighs the same, is battered in the same mixture and is cooked for the same number of minutes, Leep said.

Students can’t all be prepared the same way, Leep said. “There are things you can’t measure on a test score.”

Recently, Leep’s restaurant threw out a shipment of lettuce because of concerns nationally (not connected to Chick-fil-A) about an E. coli outbreak traced to romaine lettuce.

“As a teacher, I don’t have that option. I have to work with the students who come in the door, whether they’re hungry or their father’s in prison, and try to turn them into success stories,” Leep said.

Because Climax-Scotts couldn’t find a teacher with Leep’s unusual dual certifications in math and English, the district was forced to hire two teachers to replace Leep. Superintendent Newington laughed as he noted that Leep probably would have stayed if the district would have paid him what the district now has to pay for two teachers.

“I miss the kids, the way they touch your life. But I have the same thing here,” Leep said, looking around the restaurant. “This is my home. The folks in red (Chick-Fil-A team member uniforms) are my family, and we’re inviting people into our house as guests.”

Those guests sometimes include former students. Leep hired one recently. Another sent him an English paper to edit.

His advice to state leaders: Stop thinking of teachers as overpaid and underworked, and stop treating all students the same.

“Teachers are looked at as the saviors of society,” Leep said. “I can’t fix every issue with a kid.