In 2013, Michigan embarked on the largest expansion of taxpayer-funded preschool in the nation, with the goal of improving academic achievement among low- and moderate-income students.

When students from the first class of the expanded Great Start Readiness Program reached third grade in 2017-18, they scored higher on Michigan’s standardized test, the M-STEP, in both English language arts and math than their demographically-similar classmates who didn’t enroll in GSRP. 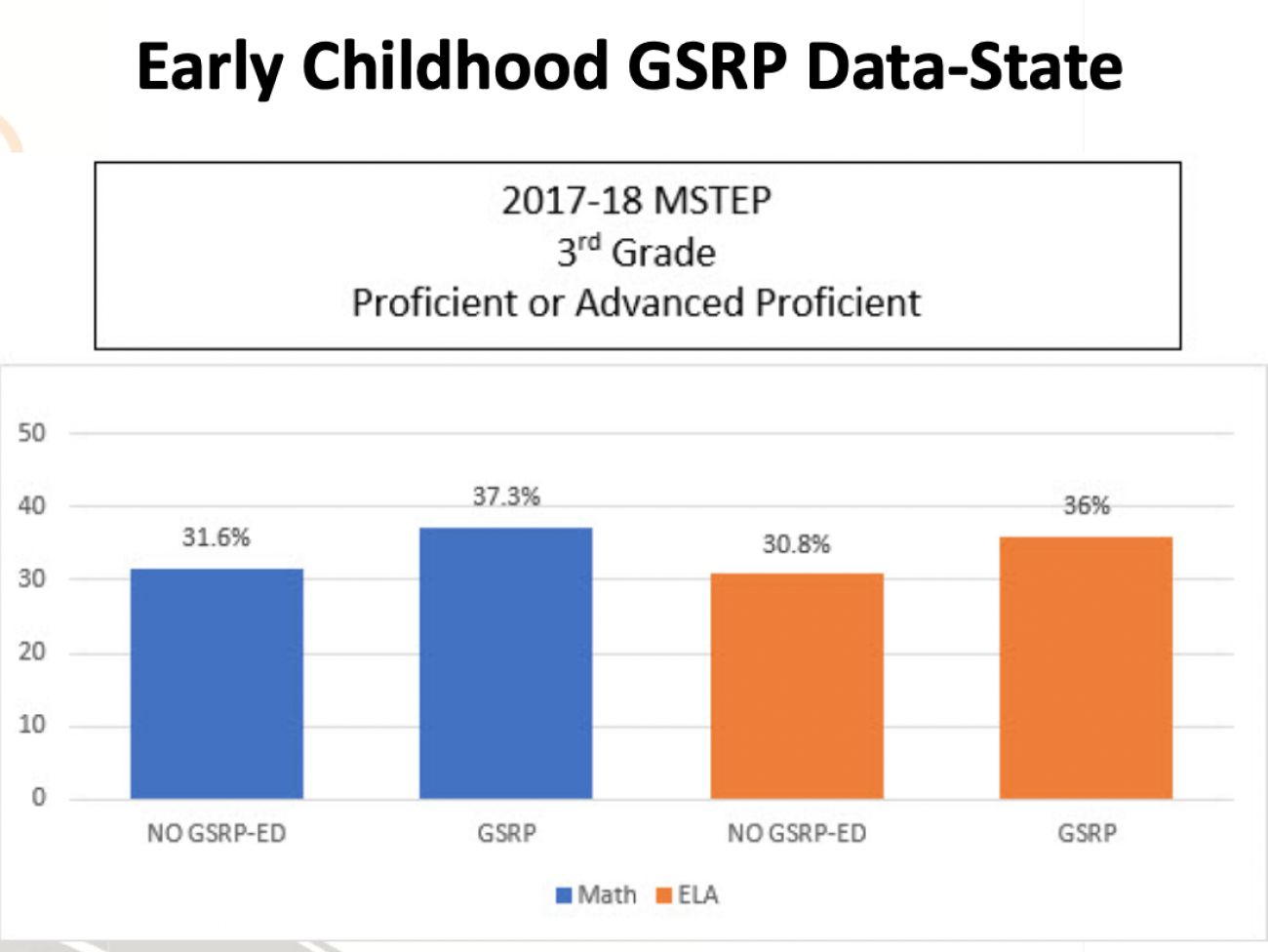 Scores were higher for students who attended GSRP as 4-year-olds in every racial group and among students with disabilities.

“GSRP has a disproportionate [positive] impact on minority children,” said Richard Lower, director of preschool learning at the Michigan Department of Education. 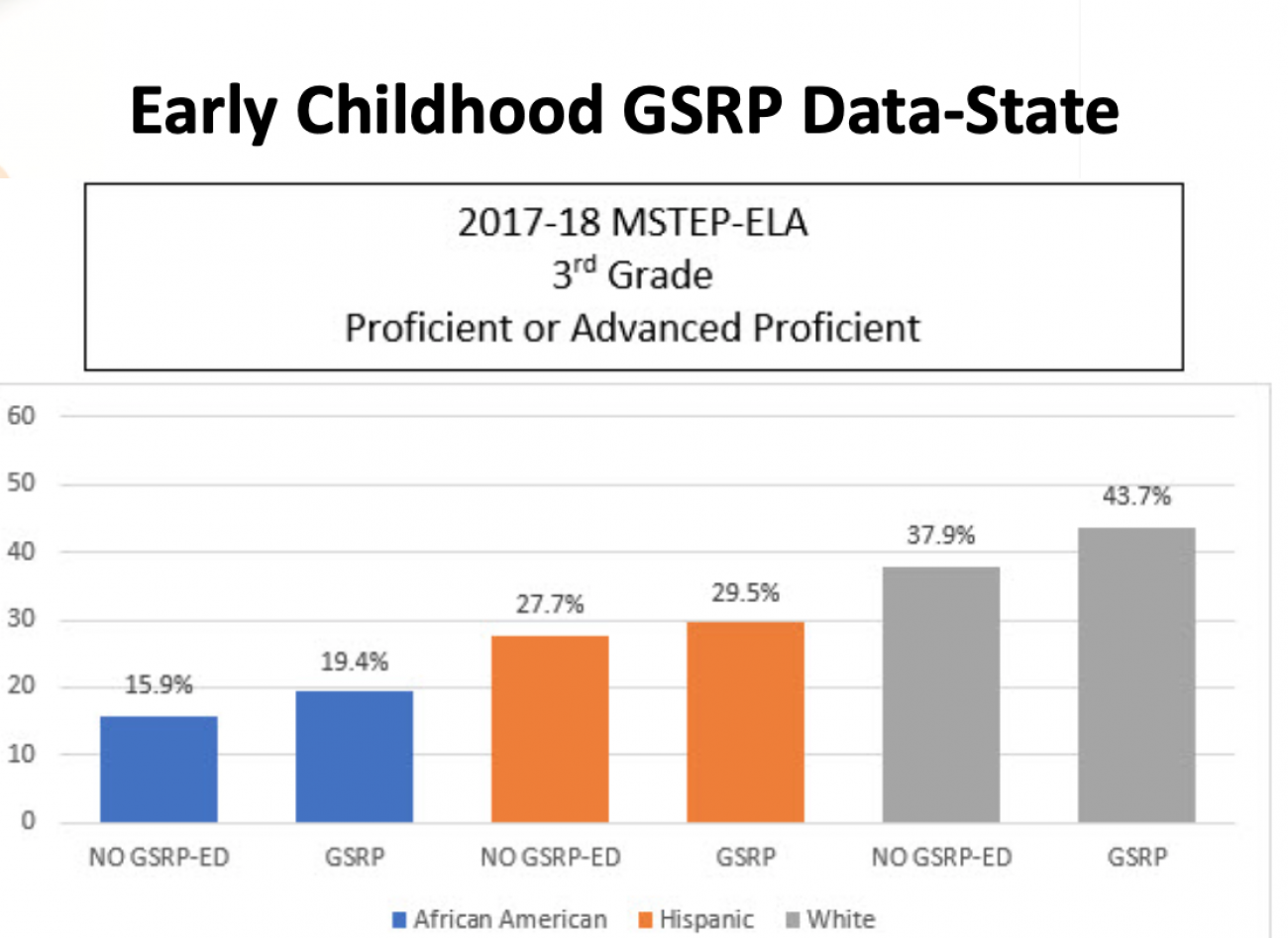 Those scores, which MDE shared with the State Board of Education and school leaders in October, affirm the value of the almost quarter-billion-dollar program that now enrolls more than a third of the state’s 4-year-olds.

The biggest downside, for now, is that about one-third of students eligible for the program remain unenrolled in either the state-funded preschool or federally-funded Head Start.

The impact of GSRP on learning is heightened this year, as current third-graders for the first time may be held back in grade if they are reading more than a year behind grade level.

“I was pretty confident our students would fare well,” Lower told Bridge on Wednesday.

In 2012, Bridge wrote a series of stories on the state-funded preschool program that found 29,000 Michigan 4-year-olds who qualified for free preschool but weren’t receiving it because of underfunding by the state.

Gov. Rick Snyder more than doubled spending on the program in 2013 and 2014 to increase the number of preschool slots available for children from low- and moderate-income families.

What was a $100 million program in 2012 has grown into $250 million in state funds annually and served 37,140 children last year. Most of those students are in a full-day preschool program, rather than the half-day sessions that existed before GSRP expansion.

That first expanded class of GSRP students, who attended preschool in 2013-14, were in third grade in 2017-18. According to an MDE analysis of that class, tracking GSRP enrollment with test scores:

The scores provide the first evidence that the taxpayer-funded preschool expansion effort has improved learning for Michigan students.

Godfrey-Lee, a high-poverty school district near Grand Rapids, dropped GSRP for a few years because it didn’t have classroom space. The result: Kindergarten readiness, as measured on a standardized test, dropped among its students.

“Readiness is just critical,” Polston said “We can’t afford not to [have GSRP classes].”

Michigan’s preschool program now is ranked as one of the best in the nation, according to an annual report by Rutgers University.

But even with the expansion and praise for the program, about one in three 4-year-olds eligible for GSRP is not enrolled in the program, or the federal preschool program Head Start.

Some of that is because of parental choice, and some because of a shortage of teachers and space, said Lower of MDE. Enrollment rates vary wildly across Michigan, from over 90 percent in Barry, Midland and Gratiot counties, to 27 percent in the U.P.’s Dickinson and Iron counties.

Even with the large expansion, “There is still more demand than [slots for students] in some parts of the state,” Lower said. “The more rural areas are the most difficult because often school districts or Head Start are the only partner in town and they have all their spots filled.”

Lower said MDE’s best estimate is that there are about 9,000 additional 4-year-olds who would enroll in GSRP if seats were available near them. That would cost the state another $65 million per year, according to a report MDE shared with legislators.