When high school student Vanessa Peltoniemi listened to college students talk last summer about their campus experiences, she was struck by a realization.

Every one of them was struggling with something, whether it was uncertainty about financial aid, lack of knowledge about how to get involved in extracurriculars or even just feeling alone.

“They all had such similar problems and they all felt like they were going through it alone,” she said. “They weren't.”

Vanessa, 17, a rising senior at Holton High School in Muskegon County, was in a national program designed to ferret out new, student-centered ways to solve some of the challenges students face in college, particularly low-income and first-generation students.

She and other selected high schoolers in her group listened to what the college students struggled with, or were surprised by and, in tandem with administrators at Grand Valley State University, devised new initiatives that are now being piloted at the university, near Grand Rapids.

That included a prototype for students named FAB App, a one-stop shop for “anything you needed to help you with the college experience,” Vanessa said. The app would help students feel safe communicating their feelings, questions and concerns about college life, finances, or academics. Students would use the app to connect to peers, with the option to speak anonymously. There also would be resources for how to reach out to college advisers and counselors.

The program that brought the students together is called REP4, or Rapid Education Prototyping, which aims to gather fresh ideas from young students to improve equity and remove some of the barriers to college. High school students who took part report developing better speaking and empathy skills along with the satisfaction that they are helping make a difference.

Students in other U.S. regions are designing their own prototypes. A group from Pennsylvania, for instance, crafted an app intended to measure high school students’ persistence in reaching their goals, what they call a GRIT score, that college admissions officers might use to help determine if an applicant is likely to succeed in college.

GVSU, the alliance’s founder and Midwest partner, told Bridge Michigan the alliance will receive $1.5 million from the Bill & Melinda Gates Foundation, the Meridian Foundation, and the Grand Rapids-based Steelcase Foundation to continue the work of improving higher education.

When students step foot on a college campus, they often recognize there is a “hidden curriculum” in higher education, said Chasity Bailey-Fakhoury, GVSU’s director of engagement for educational and community innovation.

Bailey-Fakhoury said this “hidden curriculum” can “totally upend your persistence at the institution.” But when high school students get to meet current college students and staff before they ever enroll in higher education, they have more opportunities to get their questions answered.

“That is currency, that is capital, that can help you reach the goals that you have for yourself to help you realize your potential. And so it is extremely important for eradicating that barrier around the way in which you do college,” she said. 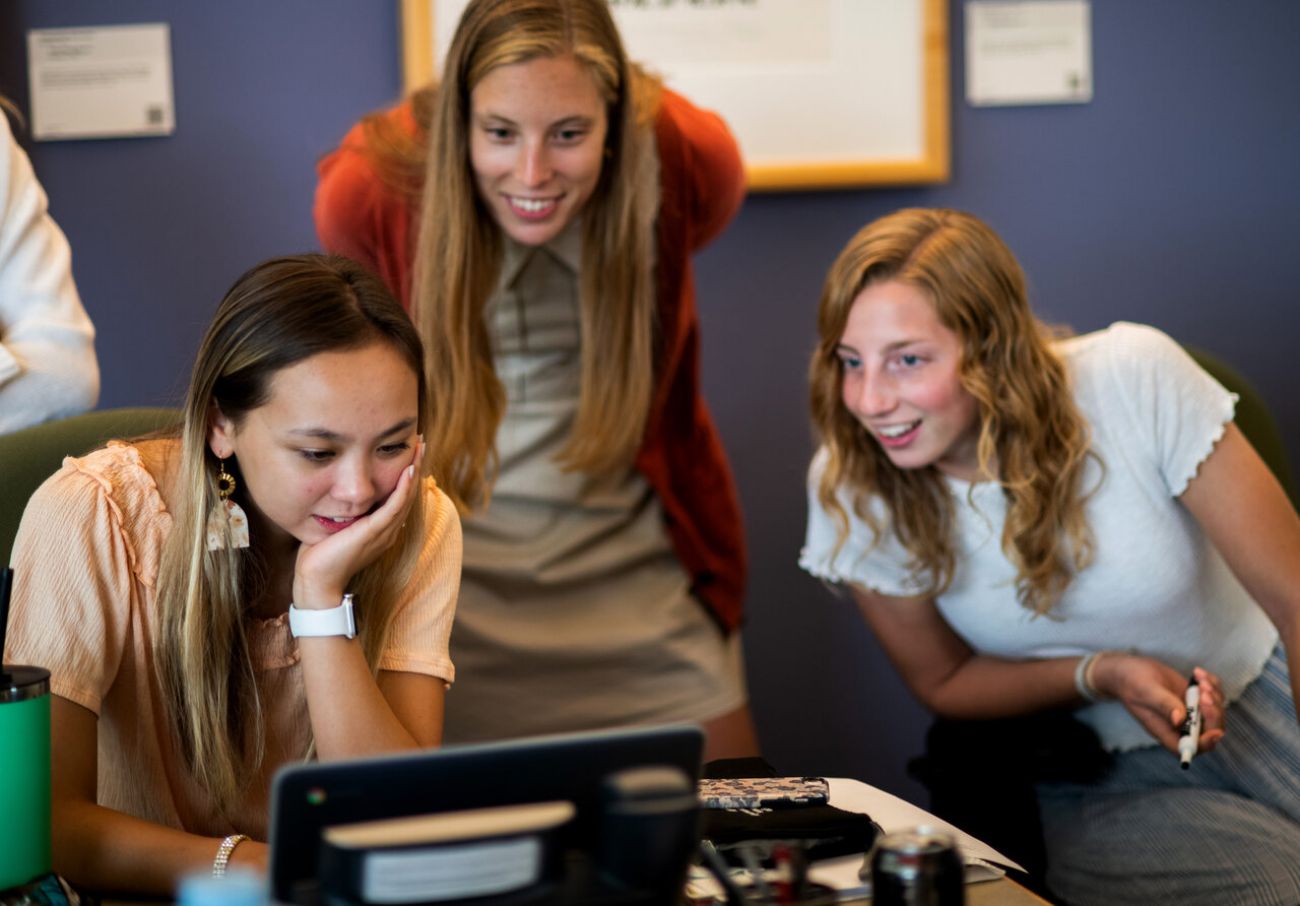 Higher education across the country faces several headwinds including less funding from state government, higher tuition for students and declining enrollment. Young students also report feeling confused and lost in navigating the college environment. That feeling is more likely to arise among students from families with no deep history in attending college.

REP4 takes the position that young voices are critical to helping reform the college landscape.

“There's no better person to solve problems than people who are actually experiencing them,” Vanessa said. “Because, adults, they've been through it, but we're living in new times today. Things are totally different than when our parents were in school.”

“Financial aid was a big one that (college students) talked about,” Vanessa said. “They didn't even really know what it was. High school didn't really tell them what that was. And I was surprised because my high school, fortunately, we have a really good college advisor who, you know, he gives us all the information, but they didn't have that information.”

The students’ FAB App prototype is in development and ready to launch, according to Elizabeth Doyle, executive associate for presidential initiatives and inclusion and equity at Grand Valley.

It will be called the “Money Smart Digital Studio” and will include on-demand information about finances. Doyle said the tool will be available to high schools, with particular focus on schools in low-income Midwest communities and Grand Valley college students. The hope is to eventually expand nationwide.

GVSU will also offer a financial literacy course for its students  this upcoming school year as well.

GVSU President Philomena Mantella told Bridge she has been surprised by some of the ideas. She thought she would see ideas about curriculum, such as concerns about how math is taught.  Instead she heard a lot about food insecurity, financial literacy, mental health and a need for empathy from adults.

“We found a whole lot of…‘How do I manage my life so I have the time and energy to put it into my studies,’ and less about the way in which academic content was delivered,” she said.

The program uses principles of design thinking where people aim to understand the user (in this case, a high school student who might end up in higher education). Students develop empathy, ideation, building and prototyping skills as they solve a challenge around getting through college, GVSU Center for Educational Partnerships Associate Director Mei Mah said.

In another student group, participants identified a need for more empathy from everyone, specifically educators, said Camille Evangelista, a student at Lakeview High School in Battle Creek.

One participant talked about his disability and that led the group to come up with the concept of an empathy robot for classrooms that would help students’ emotional health.

The robot was inspired partially by the healthcare robot Baymax in the movie “Big Hero 6.”  In the movie, the robot asks people questions about their health and then finds solutions for them.

Camille, 17, said teaching is a profession largely based on compassion and empathy. For example, during her ninth grade year, she had a teacher who used lamps instead of overhead lights to reduce student stress and students had access to fidget toys. She said she thinks it was helpful for people with sensitivity issues and she felt really comfortable in that class.

After an exhausting junior year, Camille said it would be helpful for adults to understand how hard the pandemic was on students. She has heard of students who drop out of college in their first year and said she finds that “worrisome” but she understands because school has “been a lot" recently.

Last summer, Mah was in a Zoom meeting with REP4 participants. There was one student who never turned on his camera but eventually opened up and started asking questions about community college.

He told Mah that no adult had ever talked to him before about college. That made Mah sad.

But by the end of the conversation, he said he was going to look into community college. That was a “game changer” moment for Mah.

REP4  coordinators also aim to meet students where they are at. High school students don’t have to be straight A students or write an extensive essay to get in. In fact, GVSU intentionally tells school leaders that they are looking for students “who maybe haven’t had that chance to shine,” said Bailey-Fakhoury.

GVSU partnered with traditional school districts, charter schools and youth-serving organizations across the state for its 2021 Midwest Learner Design Summit. It was one of six regional summits across the country, involving close to 300 high school students and more than 40 partner organizations.

“We got to meet all these really cool people and they talked to us like we were their equals which was cool, because we worked hard to make it,” Vanessa said.

Participating students are guaranteed admission to any of six colleges involved in the alliance and receive a waiver for their application fee.

Each college also offers its own benefits. At GVSU, participants who complete the program can earn two college credits from attending the regional summit and then have the option for three more credits if they enroll in a dual enrollment course. They can transfer those credits to any college or university across the country, Bailey-Fakhoury said. Students also receive a $500 stipend.

GVSU has also offered 10 full-ride scholarships to students who participated last summer in the regional summit for this fall. There will be several REP4 events in Michigan this summer including in-person and virtual events. If participants complete the summit, are part of the high school class of 2023 and are a first-generation college student, they will be among those considered for a full ride scholarship at GVSU.

“So the students are coming, they’re sharing their authentic selves and their ideas, but they get a stipend because we're honoring their knowledge base and their lived experience,” Mah said.

GVSU President Mantella hopes the alliance will remove some barriers between K-12 education and higher education by giving high school students exposure to what is ahead.

REP4 participant Juana Loarca Lopez, 17, of Innovation Central High School in Grand Rapids,  said she had worried she was running out of time to pick a career path to follow college, and was excited to find a topic she cared a lot about after taking a college level course while still in high school thanks to the program.

The course, in women and gender studies, was one she was excited for every week.

“It makes me think like I can do anything, like more than one thing,” she said. “I don't have to stick to one. But also… I just want to be determined on what I'm doing.”