Muskegon kids struggle to read. Their superintendent had the same problem.

Talent & Education
Muskegon kids struggle to read. Their superintendent had the same problem.

MUSKEGON – For Justin Jennings to arrive where he is today was almost impossible. He entered college reading at a third-grade level. He nearly flunked out.

Today, with four degrees to his name, Jennings is superintendent of Muskegon Public Schools, a job that leaves him facing another nearly impossible situation.

Last year, nearly two out of three Muskegon third-graders were “not proficient” in English Language Arts, the lowest ranking on the state assessment test known as M-STEP. In two years, some third-graders scoring at that level could be held back in their grade, under a state “read-or-flunk” law that goes into effect in 2020.

Muskegon and other districts around the state have poured millions of dollars and countless hours into improving literacy in early elementary students in recent years, only to see overall scores go down. In Muskegon, 60 percent of third graders were not proficient in English Language Arts in 2014-15; last year, it was 64 percent.

That’s more than twice the “not proficient” rate of Michigan as a whole. But even at the state level, three out of 10 third-graders struggle to read and the numbers are trending in the wrong direction.

There is a growing sense of inevitability that tens of thousands of children – many concentrated in Michigan’s urban, low-income school districts – will not meet the third-grade reading standards set for the 2019-2020 school year, despite what appears to be valiant and exhaustive efforts by districts like Muskegon.

Books for preschoolers, literacy coaches and early-reading curriculum haven’t moved the needle, and Jennings worries a law intended to help children succeed may have the opposite effect, because of the negative long-term effects of retaining students.

“There’s more to these students than a test score,” Jennings said.

Bridge Magazine and The Center for Michigan will be in Muskegon Wednesday as part of its Truth Tour, a year-long campaign that’s spreading fact-based reporting on Michigan’s top issues before the Nov. 6 election. The meeting in Muskegon, 6:30-7:30 p.m. Wednesday at the office of United Way of the Lakeshore, 31 E. Clay St., will focus on education.

Studies show third grade reading skills are critical. How well children read in third grade often predicts how well they’ll do in the rest of their school career. Students who are good readers by third grade drop out less, and are more likely to go to college. That means better jobs and higher pay over a lifetime.

Michigan’s third-grade reading law was a recognition of the importance of early literacy and the state’s determination to address the problem rather than simply wave struggling students through to the next grade. Under the law, third-graders whose readings skills are more than a year behind their grade level are recommended for retention in third grade.

There are numerous exemptions to the third-grade reading law, including for English language learners and children in special education, as well as for students who demonstrate adequate reading skills through school work beyond the M-STEP.

Still, it’s likely that thousands more children will flunk third grade than do currently and that, because test scores tend to correlate with income, the majority of those held back will be low-income children like those at Moon Elementary in Muskegon  Among other things, such a scenario raises questions about how schools and districts might redeploy resources and teachers.

Critics of the law also note studies that point to the negative impacts of flunking students, including damaging social connections and increasing the likelihood of students’ dropping out.

The issue has even entered this year’s campaign for governor. Republican nominee Bill Schuette announced in March that if elected he would boost early literacy by creating a cabinet-level state literacy director, placing reading coaches in every elementary school, creating summer reading programs and the like. Schuette, who also vows to cut taxes, did not say how much more his reading proposals would cost or where program funding would come from; nor did he specifically address the state’s third-grade “read-or-flunk” policy at the time.

Asked where she stands on the third-grade retention law, Democratic nominee Gretchen Whitmer told Bridge in July the state “shouldn’t punish students because our leaders have failed to make public education a priority.” She called for universal preschool, tripling the number of literacy coaches, and giving students “the in-school wraparound support they need – like counselors, social workers, school nurses, school security, healthy meals and safe transportation.” Whitmer, likewise, has not put a price tag on these services, nor has she said if they would require raising taxes.

A flurry of programs, mixed results

Since the third-grade reading law passed in 2016, Moon Elementary has added “classroom libraries” in its classrooms, filled with books purchased through donations.

Moon Principal Okeela McBride ticked off the school’s other early literacy efforts:  “We have extended school day at the K-2 level,” McBride said. “We have Champs, MTSS, Kagan training.” The school is part of the Reading Now Network, an early literacy program organized by superintendents in West Michigan, and uses i-Ready curriculum software to track student progress.

Across Muskegon County, more than 22,000 books have been distributed to low-income families with pre-kindergarten children since January, said Muskegon Intermediate School Superintendent John Severson. “With those books, we’re messaging to parents about the importance of literacy,” Severson said.

Across the state, $80 million has been spent on early literacy efforts since the third-grade reading law was passed.

And scores have gone down.

Two years ago, the percent of Moon third-graders who tested at a proficient or higher level jumped from 6 percent to 18 percent. But last year, that figure dipped to 11 percent.

On average, Muskegon’s third-graders were 1.7 years below grade level according to an analysis by Bridge Magazine and Stanford University that looked at data from 2009 to 2015. That means the average Muskegon third-grader is in grave danger of being tapped for being held back under the new law.

Helping struggling readers “has a special place in my heart,” said superintendent Jennings, “because I know how it feels.” 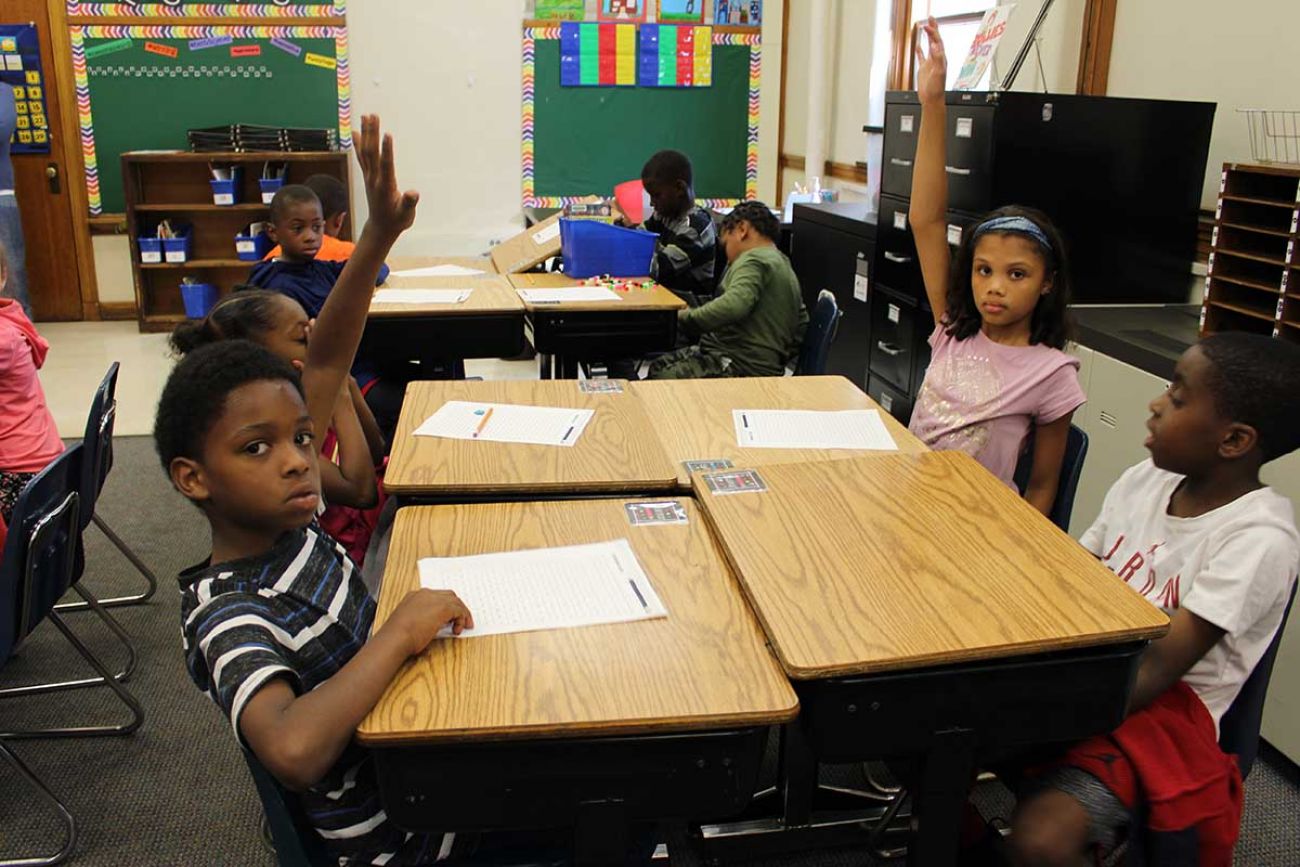 Reading ‘The Giving Tree’ in college

Jennings said he scraped through school with coping mechanisms that covered for his poor reading skills. His poor reading caught up with him in his first semester at Purdue University, where the high school basketball star had earned a scholarship to play for the Boilermakers.

An evaluation test determined Jennings had the reading skills of a third-grader. On the verge of flunking out of school, Jennings reached out to his own third-grade teacher. She made regular trips from Grand Rapids to West Lafayette, Ind., to tutor her former student, the then-six-foot-four Big Ten basketball player hunched over a desk sounding out the words in the children’s book “The Giving Tree.”

Jennings said he practiced reading in a quiet corner of the college library.

“That time was tough,” Jennings said, “but it changed my life.”

Jennings earned a bachelor’s degree in African-American studies at Purdue, then three master’s degrees at Grand Valley State University. He’s now working on his dissertation for a doctorate at the University of Michigan-Flint.

Last Wednesday, after visiting a third-grade classroom, Jennings spoke to a class of high school freshmen, telling them his story of going from struggling to read “The Giving Tree” in college to running a 3,700-student school district.

“I say to them, ‘If this is something I can overcome, you can overcome anything,’” Jennings said.

Moon Principal McBride thinks the emphasis on literacy curriculum isn’t enough for students in districts like Muskegon, where 90 percent of students are low-income and 159 students were homeless in the 2016-17 school year.

Low test scores and low income go hand-in-hand across Michigan. Muskegon’s third-grade reading scores were in the third percentile in the state, but income in the district was in the bottom 1 percent in the state, with a median household income of $28,386

Most of Moon’s students have experienced some kind of trauma, McBride said. “They’ve lost a parent or a father has just gone off to prison,” McBride said. “They go home each day and don’t know where their next meal is coming from or they’re a sixth-grade student forced to raise their little sister because Mom has to work or mom has a drug problem.

“When you have a building filled with kids who are exposed to those issues, you’re busy trying to teach them to add, subtract and multiply. And we say we don’t understand how the teacher is working so hard every day, coming in early, staying late, and (the students) still are not getting it,” McBride said. “It’s because they’re not concerned about learning to add, subtract and multiply. They’re concerned about why when they go home, they see Mom getting beat up by Dad.”

Jennings and McBride argue that urban schools aren’t going to be able to move the needle on reading without dealing with the trauma that kids are exposed to when they leave the school grounds. The state needs to invest as heavily in social workers and counselors as it does in curriculum, they say.

Moon Elementary has a social worker one day a week and no counselors.

“Until you know what our kids are going through, it’s hard to even talk about curriculum,” McBride said.

“Everybody has to have someone to rely on,” Jennings said. “(But) you get handcuffed. There is going to be a law (to hold back struggling third-graders), but there’s not going to be (enough) funding to help.”