It’s a question the public engagement team from the Center for Michigan (which also publishes  Bridge Magazine) hears all the time during our statewide engagement campaigns.

Michiganders tell us they don’t understand how our public schools could be underfunded with all the lottery money they recieve. If schools are hurting for cash, they say, then that money must be flowing elsewhere. Either that or some nefarious state accountant burrowed away in the Capitol building’s basement is putting lottery money into the School Aid Fund, then redirecting it using Excel wizardry.

These concerns may reflect residents’ historically low trust in the workings of Michigan government. To provide some clarity, Bridge examined the state’s lottery money. Here are answers to the most commonly asked questions about the lottery from residents we meet across the state.

Does state lottery money actually go to the schools?

Michigan was one of several states in the early 1970s to legalize a state-run lottery. It was seen as a way to raise state revenue, particularly for education, without increasing taxes. The Michigan Lottery was created in 1972, and lottery profits were formally earmarked for the School Aid Fund in 1981.

The money from the School Aid Fund, and by extension the lottery, contributes to the state’s public education system. Classrooms are a part of it, but that’s not the entire picture.

The School Aid Fund is designed to “maintain and support a system of free public elementary and secondary schools as defined by law’ as required by the Michigan Constitution.”

Once lottery money is in the School Aid Fund, it becomes part of the larger public education pot ‒ a small part, about 7.5 percent, but a part.

“Once the dollars get into the School Aid Fund, they’re all commingled and you can’t tell the ‘green’ dollars from the State Education Tax [the money raised from property taxes instituted by Prop A] from the ‘orange’ lottery dollars,” Jim Stansell, senior economist for economic/revenue forecast and tax analysis at the nonpartisan Michigan House Fiscal Agency, told Bridge.

The state’s school aid money is largely distributed on a per-pupil basis –  districts with more students get more money, and those with fewer get less (some districts get more per pupil than others). Districts use that money to pay teachers, buy textbooks and heat buildings.

How much money does the lottery generate?

It varies. In 2018, the Michigan lottery pulled in $3.58 billion in revenue, with $941 million of that going to the schools, with the rest going to winners and expenses. That’s 26 cents for every lottery dollar collected going to schools.

School’s only get about a quarter of the lottery’s revenue because people play the lottery to win. It’s not like every dollar handed over the gas station counter is deposited straight in the education piggy bank. Last year, 62 percent of lottery revenue was distributed to winners. Another 9 percent went to lottery vendors and retailers, and 3 percent was used for the lottery operations and administration.

That left 26 percent of total revenues as the lottery’s net profit; it’s that amount that is earmarked for education. These profits amounted to $941 million in 2018, one of the larger figures the lottery has generated for Michigan’s schools (even when adjusted for inflation).

In general, the amount of inflation-adjusted money the lottery generates for the state’s schools has increased over time.

What percentage this represents of the lottery’s revenue varies annually “because of a number of factors, specifically overall player purchases, the amount of prizes won, commissions for retailers and vendors, etc.” noted Jeff Holyfield, director of public relations for the Michigan lottery, in an email to Bridge.

How big of a deal is that funding in the grand scheme of state funding for schools?

With how heavily the lottery advertises its school contributions, it’s easy to assume the lottery is a major player in the state’s education funding.

In reality, only 7.5 percent of state funding for K-12 education came from the lottery in the 2018 - 2019 budget year, according to the House Fiscal Agency. The state sales tax is by far the largest funding source for education, constituting nearly 47 percent of the $12.9 billion the state puts into the education budget.

Now, 7.5 percent is not inconsequential. However, it muddies the popular perception that the lottery is a prime driver of Michigan’s education budget. The reality is the lottery does not generate enough money to render other funding sources obsolete. It’s never come close.

OK, the state puts lottery money into the school fund. But don’t legislators then put less money in the education fund from the general fund, so schools don’t actually see a bump in funding?

They don’t appear to do so. Bridge compared education revenues from 1994 (the year Michigan instituted its current school funding system) to 2018. While general fund contributions to the School Aid Fund can fluctuate significantly based on tax revenues, they do not appear to move based on the lottery’s contribution. 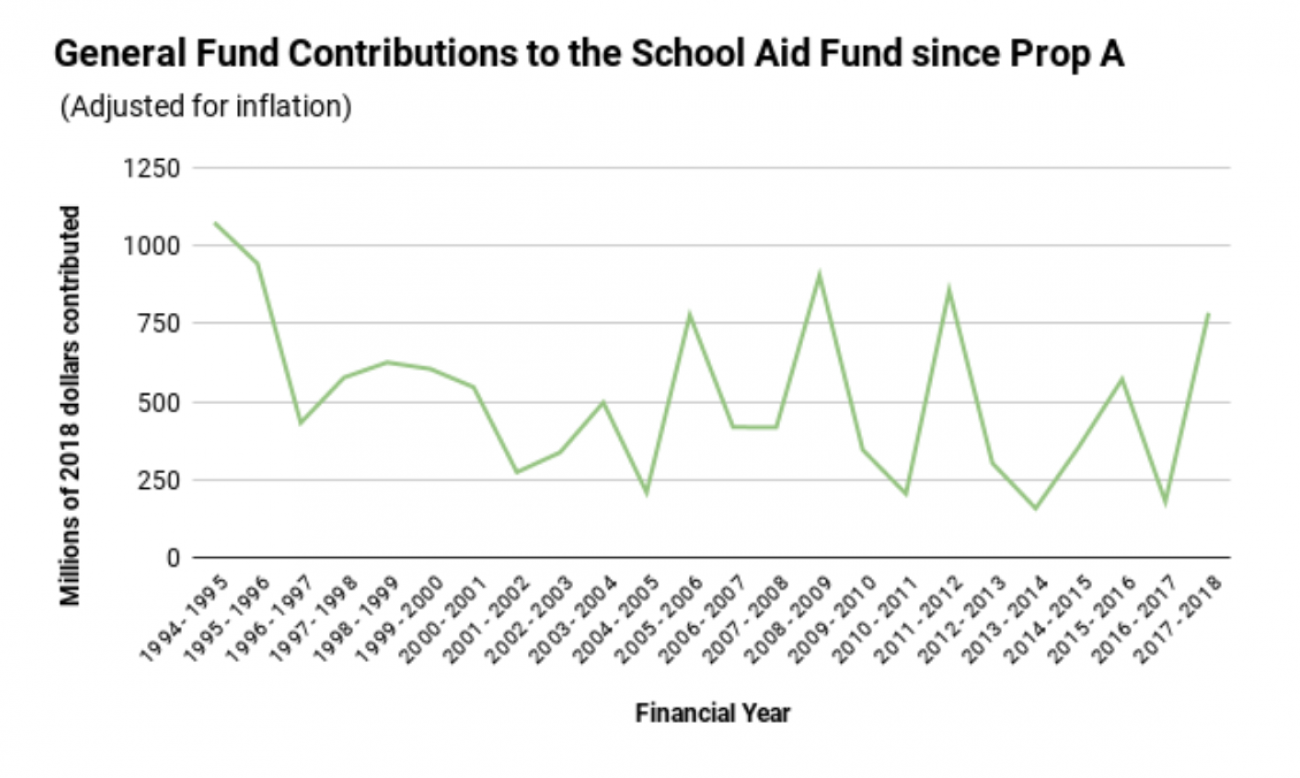 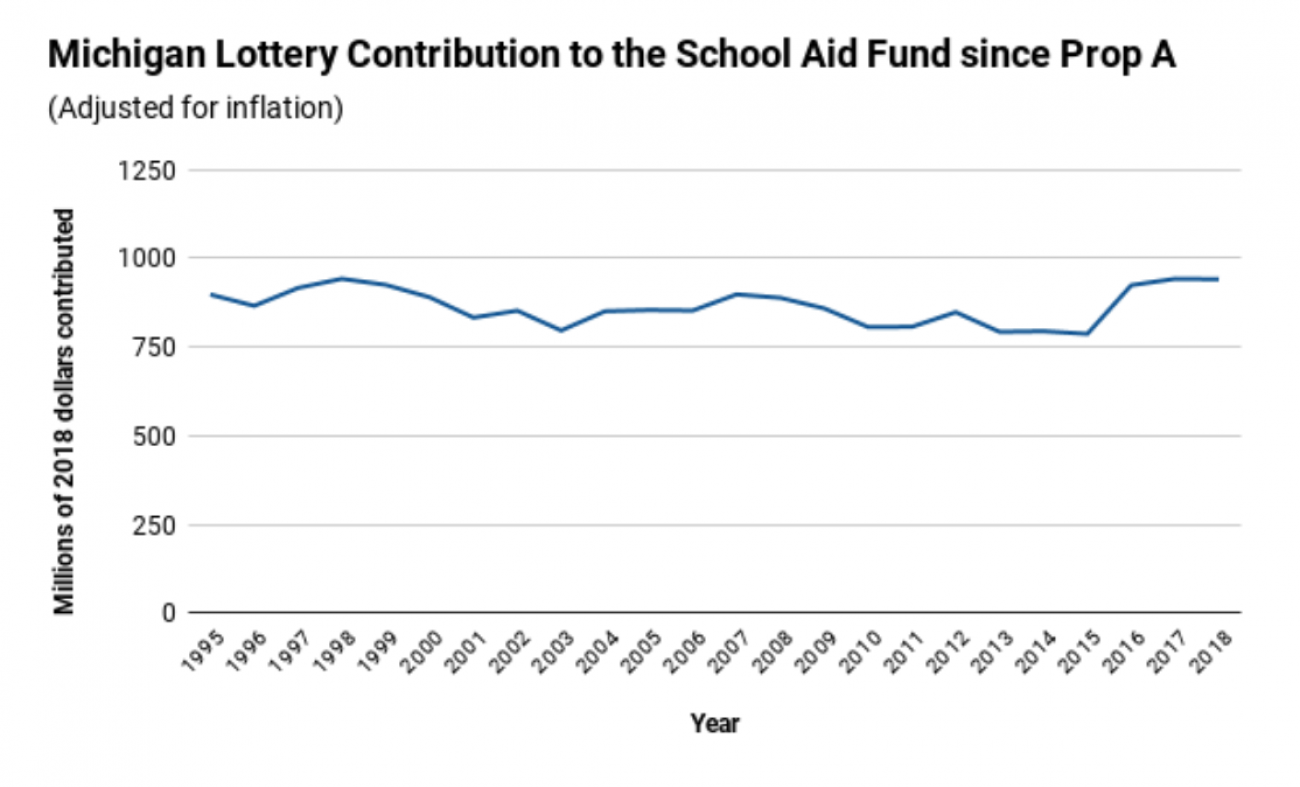 Stansell told Bridge that when the House Fiscal Agency projects the School Aid Fund for the next budget year, “The lottery is a component of [it], but nobody’s going to look at lottery revenue and say ‘Oh, because of the inclusion of lottery revenue we can increase funding to schools, or reduce some other earmark.’ It’s a piece of the puzzle the same way the State Education Tax is, or the Income Tax earmark, or the Sales Tax earmark, or any other dedicated revenue source.”

Isn’t this just a case where the Legislature duped voters by approving a state lottery when it knew lottery revenues would not significantly increase overall education funding?

If there was any trickery going on in the early 1970s, don’t blame the Legislature.

Voters were the ones who legalized lotteries.

In 1972, a state-run lottery was placed on the ballot. It passed with nearly 73 percent of the vote. Until that point, lotteries had been constitutionally prohibited in Michigan. Legislators had tried 29 times in the six years before the ballot initiative to legalize gambling, but none of those bills passed.