The University of Michigan invested big in Detroit. Now come the evictions.

The eviction notice arrived last month at William Nunley’s modest two-story house in Detroit’s Fitzgerald neighborhood, one of the hottest real-estate markets in the city. He had lived in the house for three years with his wife and their three children and had hoped to buy it from their landlord.

The construction worker said he was unaware the landlord had fallen about $6,000 behind in taxes and that the house was sold at Wayne County’s tax auction in October for $17,000 to a company funded in part by the University of Michigan.

“We didn’t know it was up for auction and we didn’t know somebody else owned it,” said Nunley, who said he kept current on his rent and had a good relationship with his landlord.

“Then we got (termination of tenancy) papers telling us to show up for court. But I had to go to work. You can’t just call in and say, I have to go to court,” he continued, a laugh creeping into his voice. “That is going to give you new problems.”

The home –  located in a neighborhood of northwest Detroit the city is spending millions to revitalize –  is one of 112 bought last fall out of tax foreclosure by a company known as FDR Investments LLC. Property records show the company spent about $2 million at last fall’s auction and was its single largest buyer. A total of 47 of the homes bought by FDR were occupied at the time of foreclosure, and evictions were filed in court on 20 of those homes, according to Wayne County records.

Related: U-M’s Schlissel: ‘Our children will suffer’ because of how we treat higher education today

Nunley said he was shocked to learn his home’s new owner is partially bankrolled by the University of Michigan. Its Board of Regents voted in February 2018 to allocate $30 million from its endowment to a related company: the Detroit Renaissance Real Estate Fund, which is owned by FDR’s two principals.

“My wife and I are trying to get the money together to buy one house. We don’t have millions to buy 113 houses” Nunley asked. “How are we supposed to compete with a university? How is that fair?”

“My wife and I are trying to get the money together to buy one house. We don’t have millions to buy 113 houses. How are we supposed to compete with a university? How is that fair?”

–  William Nunley, a Detroit renter who was evicted by a firm that received funding from the University of Michigan

In an interview Wednesday, U-M President Mark Schlissel said he didn’t have knowledge of the investment but noted that the university doesn’t “use the endowment as a social tool.” 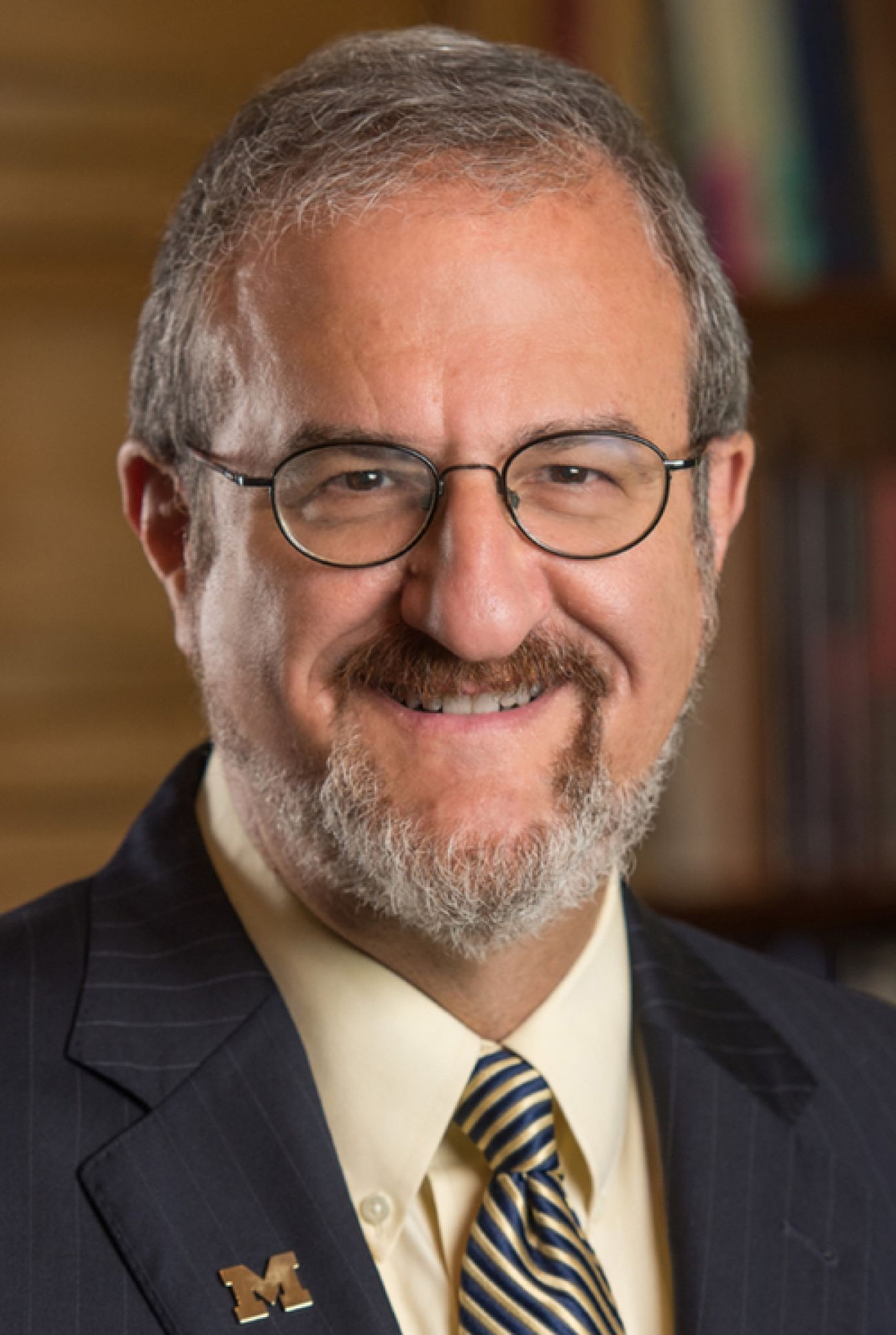 “We use it as a way to support the university in an era where public support has really dried up,” Schlissel said, adding that Detroit neighborhoods could benefit from more outside investors.

“The challenges around housing in Detroit are enormously important,” he said. “The downtown and the Midtown seem to be doing great and the neighborhoods seem to be lagging.”

Hanker, Friedman and attorneys handling the evictions did not respond to numerous messages and attempts to solicit comment.

U-M regents meeting minutes do not explain why the university, which has a $11.9 billion endowment, invested in Detroit real estate or how the deal came together.

The investment in Fortus was one of three made from U-M’s long-term endowment portfolio in the winter 2018. The other two were in a venture capital fund and a commercial real estate venture in Washington D.C.

A memo to regents from U-M Chief Financial Officer Kevin P. Hegarty explained that “Fortus targets undervalued homes that are typically two to three bedrooms and require varying degrees of renovation. The properties are held for rental income, but Fortus expects to dispose of the assets in bulk through a large portfolio sale.”

That’s a business model familiar to any viewer of HGTV or other real-estate investment shows: Buy low, renovate to increase the rent, and sell high.

While stressing he isn’t aware of the “specifics of the investment,” Schlissel said an argument could be made “that the dislocation of a certain number of people in return for investment in decaying housing stock is part of the pathway to making the city a better place to live.”

“I worry about the University of Michigan investing in this fund because the most likely outcomes of the fund’s purchases in Detroit are counter to the U-M’s mission as a public university with a strong commitment to the city.”

Margaret Dewar, a U-M urban planning professor emerita who has studied tax foreclosure and development in Detroit, said she is concerned about Fortus’ impact on neighborhoods.

Once one of the nation’s leaders in black homeownership, Detroit now is a majority-renter city. Last year, bank lenders wrote only 1,000 mortgages in a city of 673,000 residents, and affordable housing is becoming scarce.

“I worry about the University of Michigan investing in this fund because the most likely outcomes of the fund’s purchases in Detroit are counter to the U-M’s mission as a public university with a strong commitment to the city,” Dewar said.

“President Schlissel’s initiatives and the efforts of hundreds of faculty and thousands of students working in partnership with Detroiters need to succeed, not be undermined by this real estate investment.” 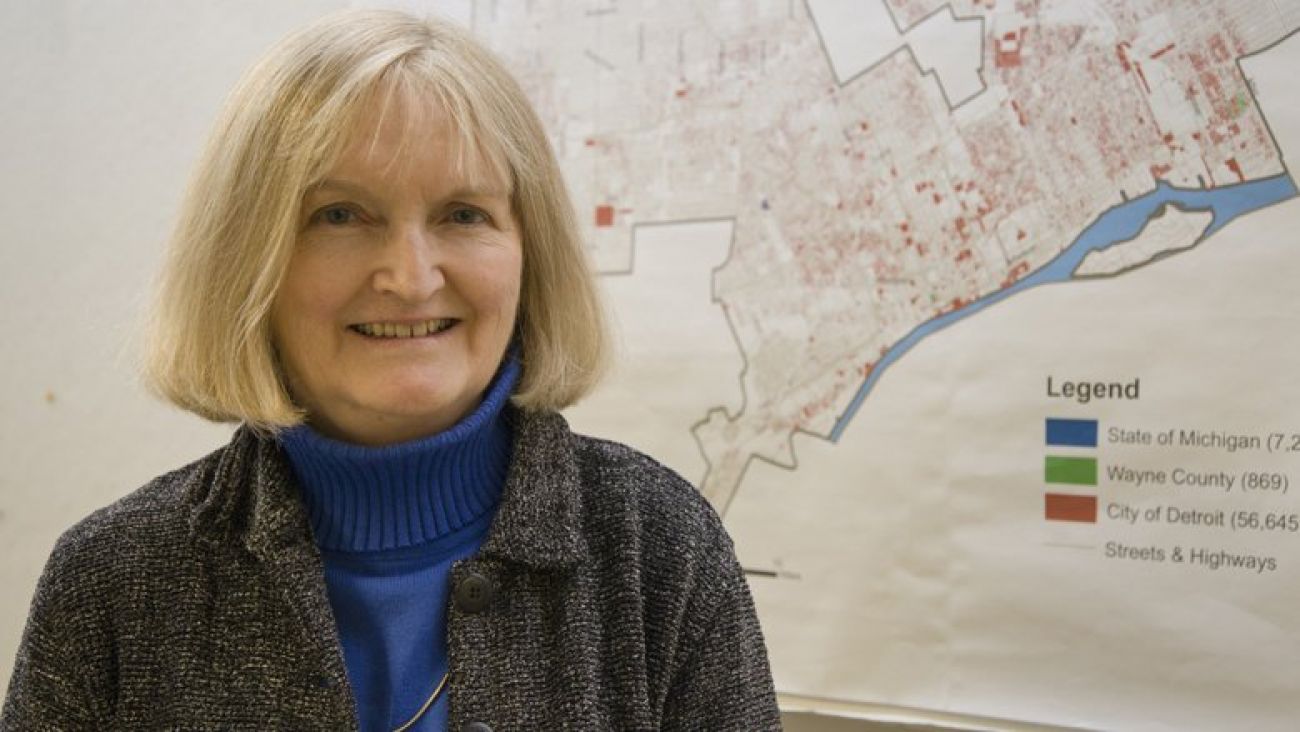 Records show FDR and Fortus bought properties in neighborhoods that are rebounding and receiving heavy investment from City Hall, including East English Village, Fitzgerald and the North End.

Among the properties: a two-story, five-bedroom red brick home with a wrap-around porch at 12503 Broadstreet in Russell Woods, traditionally one of Detroit’s finest neighborhoods.

Records show the home, which was occupied at the time of the tax auction, owed $14,000 in back taxes and fees. Fortus bought the home for $66,000 and remodeled it.

Now, a company owned by Fortus called Hela Management, is listing the home for $2,350 a month in rent.

Following conventional wisdom that housing costs should comprise no more than 30 percent of income, tenants would need to make $80,000 per year to rent the home. That’s triple the city’s median income of around $26,000. Fortus also requires tenants to have a 620 credit score and “no prior evictions or legal filings to collect rent.” Nearly two-thirds of Detroiters have credit scores below 600, according to the Urban Institute, a Washington, D.C., think tank. 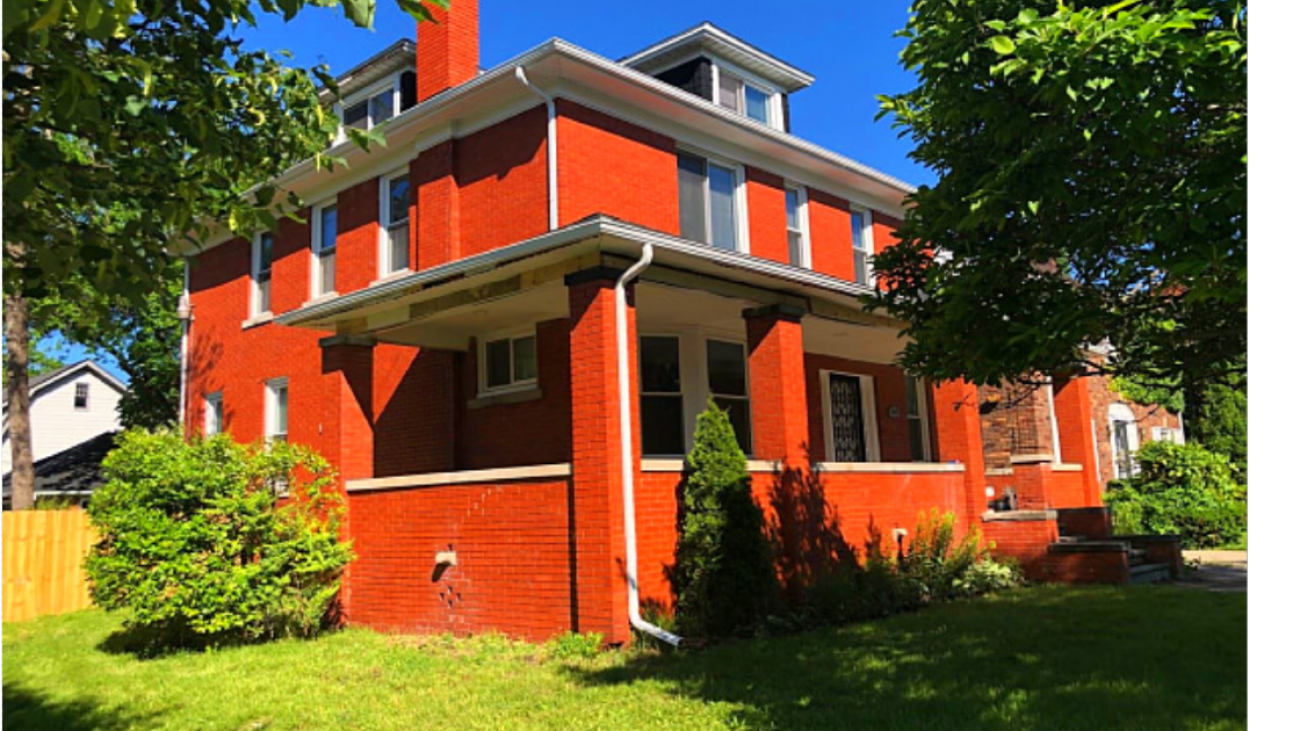 Fortus’ model of targeting the higher end of the market is unusual among buyers at the county’s tax foreclosure auction, which has sold more than 100,000 homes in the past 10 years.

A recent study by Joshua Akers, a U-M urban planning professor, found the vast majority of properties bought at the auction were to bulk buyers who made few renovations, kept properties as low-quality investments and allowed unprofitable ones to fall back into tax foreclosure.

He and others contend that cycle of foreclosure has further depressed homeowner rates in Detroit and pushed nearly a third of city properties, 95,000, to the Detroit Land Bank, a city agency that acquires tax-foreclosed land after it fails to sell at auction.

Private equity firms like Fortus rarely appear as direct bulk purchasers in the tax auction, perhaps because the business model of those firms is focused less on renting than on selling.

“With private equity typically there’s a huge incentive to exit, to sell the assets and generate a huge gain on the sale at the back end,” said Aaron Seybert, a social investment officer at the Detroit based Kresge Foundation, a philanthropic investor in Detroit.

Seybert said private equity investors in other cities generally sell inventories in bulk to other investors. Private equity firms are typically less predatory than other bulk buyers, but also less willing to work with existing tenants to stay in properties, Seybert said.

“It’s professionalized, more standardized, more unyielding because of the scale at which they operate,” he said. “You’re not going to get the human touch. What you’re going to gain in efficiency you lose in flexibility. It’s pick your poison or pick your benefit.” 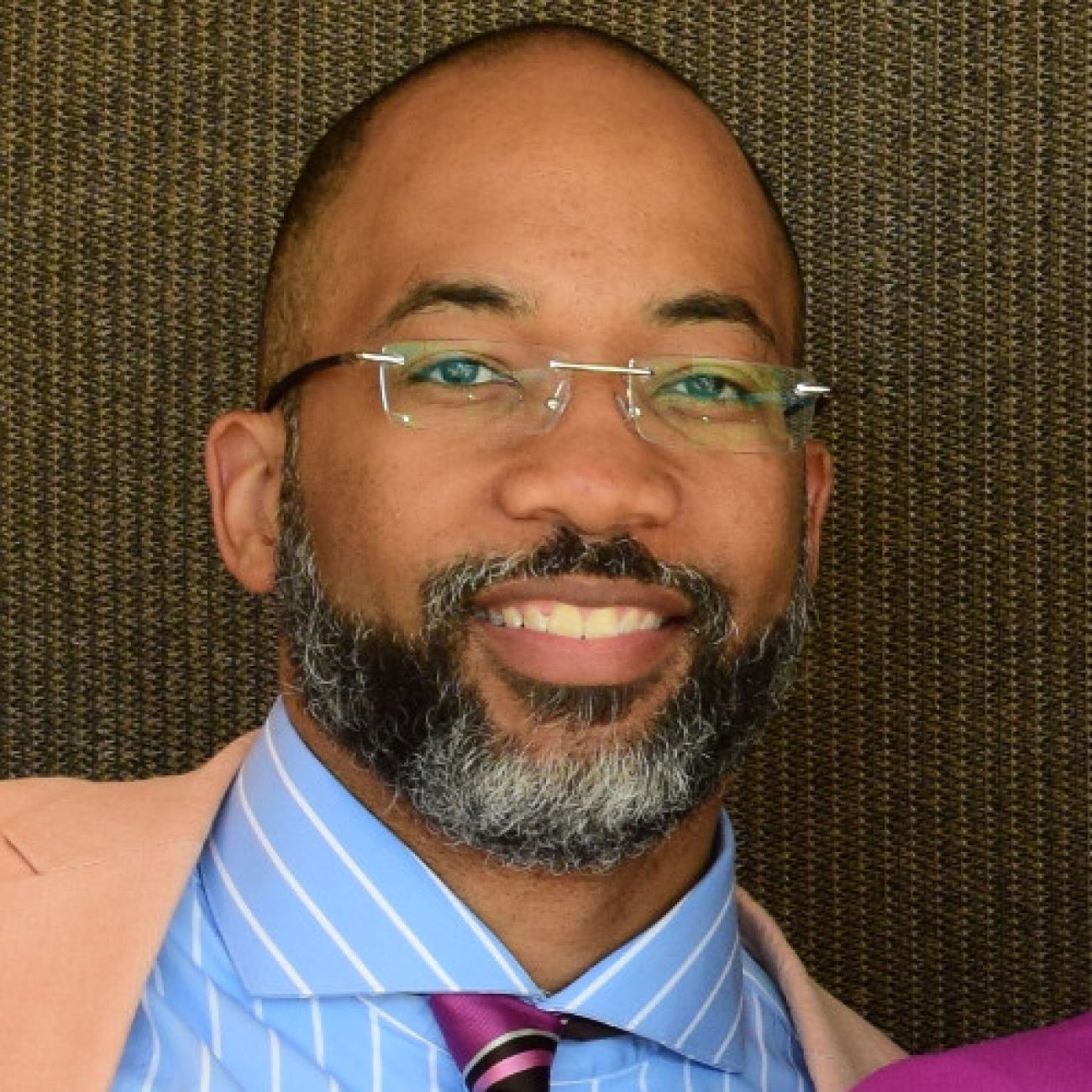 “If you’re buying at the auction, your goal is to convert that asset into its highest and best use from Day One,” said Jones, who added that developers should try to work with tenants if they can pay market rate rents.

“There are going to be some houses that are significantly under market value. The value proposition is for renovating and releasing that house to unlock even more value…. It is a really hard truth that everybody can’t live everywhere if we want to have a functioning city.”

Speaking at a real estate conference in December 2017, Hanker said recent improvements in Detroit and demographic trends make the city ripe for investment.

“There are more than 100,000 students within 25 miles of Detroit now, and they are bringing in their wealth and skills and staying to build up the local talent pool,” Hanker is quoted in Think Realty.

Hanker and Friedman are both from Los Angeles but maintain an office in Southfield. Hanker graduated from the University of Michigan in the late 1990s.

Both have been involved in Detroit real estate for several years but have kept a relatively low profile. Hanker's Linkedin profile claims  "Fortus has purchased, renovated and tenanted more residential real estate in Detroit than any other investment group over the past five years.”

Corporate paperwork registered to the pair show they’ve been buying properties through the tax auction since 2013. In 2017, they made a deal with Dan Gilbert-owned Bedrock LLC and the City of Detroit to finance the rehab of an affordable housing complex in Midtown.

Less successfully, in 2013, Hanker and Friedman tried to bring their private investment model to a deal with the Detroit Land Bank Authority. Through a Delaware LLC called Fortus Homes, Hanker and Friedman pledged to rehab and sell 24 homes in Detroit’s East English Village neighborhood by leveraging federal money and private equity to restore the homes and then sell them to middle-class families and split the proceeds with the land bank.

The land bank killed the deal a few months later when, according to meeting minutes, Fortus proposed increasing the number of properties and keeping the homes to rent instead of selling them.

Two weeks ago, Nunley and his family moved out of their home on Fitzgerald, taking their belongings before the eviction proceeding would have forced out the family.

They are now staying a few miles away with Nunley’s mother-in-law. He’s looking for a better job to make more money to afford a house in Detroit, where property values are rising quickly. He said he’d like to become a homeowner but feels the deck is stacked against families like his.

“We’re doing fine,” he said. “But this is a short-term situation.”

Sarah Alvarez is founder of Outlier Media, a journalism service that delivers data reporting and information to low-income news consumers over text messages.