Coronavirus shutdown could leave 1 in 4 jobless in northern Michigan

Already bracing for a recession, Michigan’s economy could shed tens of thousands of more jobs because of Gov. Gretchen Whitmer’s “stay at home” order Monday to stem the coronavirus pandemic, economists say.

The Anderson Economic Group in East Lansing last week predicted as many as 1.4 million of Michigan’s 4.3 million workers could lose their jobs or have hours cut because of the virus.

“These numbers mean we are not just in a corona-recession. We are facing a corona-depression during the next month,” he said.

Whitmer and many others said the economic downturn is necessary to save lives in a pandemic that has rapidly circled the globe.

But the pain won’t be felt evenly statewide, according to a Bridge Magazine analysis of federal jobs numbers and consultations with several economists.

Manufacturing will take heavy losses, but workers could be shielded — at least temporarily — by union protections that protect paychecks.

The impact will be far greater in northern Michigan, which could lose as many as a quarter of its jobs because it is so dependent on food, entertainment and tourism, a sector that could lose 60 percent of its jobs.

In Benzie County, along Lake Michigan, one-third of all jobs are tied to the leisure and entertainment industry compared to 11 percent statewide. A shutdown of a month or more could lead to 1,100 lost jobs — a quarter of the workforce — and more than $2.4 million a month in wages, a fifth of all wages.

“It’s killing us,” said Gerald Hendricks, owner of the Villa Marine Bar and Grill in Frankfort, a small Lake Michigan town at the mouth of the Betsie River, near Crystal Lake and Sleeping Bear Dunes.

The restaurant has been closed since Whitmer this month ordered bars and restaurants to shut down dine-in service in hopes of slowing the virus’ spread.

Hendricks said it didn’t make sense to continue operating a takeout business. So he sent his nine staff members home and closed.

“These are people I care about,” he said. “But if no money’s coming in, how do you make a payroll?

The pain will be real all over Michigan, based on a Bridge analysis of job and wage losses based on input for economists.

Because of limits on personal contact, travel and Whitmer’s lockdown order that allows only “essential” work, economists said manufacturing could endure short-term losses of 30 percent cut, while industries tied to trade and transportation fell 20 percent and the construction business dropped 12 percent.

Those are only estimates. The impact will differ depending on the sector. Many auto workers, for instance, will see a smaller drop in pay because of union contract protections.

But the travel and leisure sector, along with the retail and service sectors, are more exposed because most workers earn less and have few protections.

The wild card is what happens in Washington and the size and nature of any stimulus package approved by Congress.

But economists agree workers who make the least — those who sell shoes, cut hair, fix cars — are most exposed.

“The workers who are likely to be most affected are those in local-provided services done face-to-face,” said Lou Glazer, president and co-founder of Michigan Future, Inc., a nonprofit focused on helping Michigan succeed in a knowledge-driven economy.

“And those industries tend to employ lots of workers in low-wage jobs without a lot of benefits and who have little to no personal savings.”

Despite the downturn, some economists say the deepest setbacks will be brief.

“This is not going to be like the Great Depression,” said Don Grimes, an economist at the University of Michigan.

“The loss of income then was probably five to ten times worse than what we are going to experience,” he continued. “It will not even be as bad as [Michigan’s] lost decade [in the 2000s], when we lost almost a million jobs. But the decline will be much sharper, the job losses will occur in a matter of months.”.

Some parts of the state have a more diverse economy and the impact will be strong but muted.

In Grand Rapids, estimates are job losses could exceed 61,000 or better than 15 percent of the workforce, based on industries that likely will have to shut for several weeks.

“This is not going to be like the Great Depression,” said Don Grimes, an economist at the University of Michigan.

But that’s better than areas that rely nearly entirely on one sector, like travel and tourism.

During past economic downturns,  Grand Rapids has fared better than some other area that rely more heavily on one industry, Baker said.

If there’s a bright side, it’s that many of Michigan’s tourism-reliant businesses generate the bulk of their money in the summer.

Sarah Hagen, president of the Charlevoix Area Chamber of Commerce, said the stay-at-home orders are painful for businesses, but “we understand it’s the best way to go so we can get over the virus more quickly.”

“We’re hoping we can do this now, and be ready in May to cater to people who come to enjoy our area,” she said.

But if the coronavirus shutdown continues into May?

Or if Michigan residents have less money to spend on summer tourism as a result of lean times during the shutdown? That thought frightens Frankfort bar owner Gerald Hendricks.

“God knows what Frankfort will end up like,” he said. “Everybody will be affected.”

Editor's note: The headline on this article was changed on March 24 to more accurately reflect potential job losses in northern Michigan.

The state was approved for three more weeks of Lost Wages Assistance, and jobless workers should see that money by the end of September. 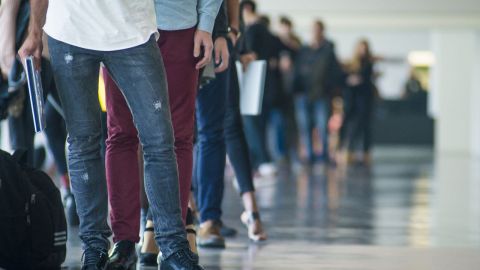 Payments will be retroactive to Aug. 1. However, state officials warn they’ll only last up to five weeks.

Nearly a million Michiganders who have lost jobs during the coronavirus pandemic will eventually qualify for $300 per week in extra unemployment benefits, but the payments could take weeks to arrive and may last just weeks more.