Michigan restaurants can now reopen.That doesn’t mean most will.

Dining rooms and patio seating can open with safety limits across Michigan starting Monday, and the state’s restaurant industry is waiting to see what that means for operators and their customers.

Coronavirus restrictions have been lifted for restaurants in the Lower Peninsula, but only about 50 percent of them were prepared to reopen Monday, said Justin Winslow, CEO of the Michigan Restaurant & Lodging Association.

Restaurants that reopen must comply with new social distancing and health requirements, such as lower capacity guidelines and the need for both personal protection equipment for staff and new operator protocols that minimize contact risks

One thing to consider, Winslow added, is how the customer experience may be changing as restaurants adapt.

“Have some patience,” Winslow said, noting that not all restaurants switched to carryout and delivery services during the last three months. “Come in with a positive attitude,  but just don’t expect that it’s going to be exactly like it was before.”

Michigan’s $19 billion restaurant industry lost an estimated $1.2 billion in sales during April, according to a restaurant association survey that month.

While many restaurants shifted to carry-out sales to keep their kitchens operating, the loss of dining rooms and in-person service continues to be a major issue as they consider reopening.

Envie, a 60-seat bistro normally open for lunch and dinner in downtown Lansing, is one that will delay reopening, said co-owner Lance Davis.

“It’ll be a couple of weeks … Fifty percent (capacity) doesn’t really work for us.”

One solution to capacity concerns is to let restaurants expand outdoor seating. It’s something both proposed and approved in many communities across the state, including Bay City, Birmingham and Detroit. There’s a presumption in the industry that many customers will feel more comfortable outdoors after months of coronavirus-related lockdown instead of in an interior dining room.

While communities are setting up those plans, some restaurants including Envie don’t see that as an option.

“We’re at a disadvantage,” Davis said, because setting up sidewalk dining would block firefighter access to a water line.

That’s going to keep the pressure on addressing safety concerns among customers so that they’ll be willing to sit inside the restaurant when it reopens.

“Profit margins in restaurants are low, and it’s difficult to make [capacity reductions] work,” Davis said. “When it’s cut in half, you can’t pay the bills.”

Among other issues, the pace of reopening is influenced by access to food inventory; a workforce that could be receiving more in unemployment because of $600 per week federal stimulus; and the complexity of new training requirements, Winslow said.

Restaurants in the Upper Peninsula and northwest Lower Peninsula were allowed to open at reduced capacity before Memorial Day weekend, giving the rest of the state a roadmap to expectations.

About 40 percent opened as soon as they could, using the few days’ notice to convert their carry out only operations to restoring in-person service, Winslow said.

Two weeks later, he said, almost all restaurants are now open in those regions.

“It was not easy for many people to flip that switch,” Winslow said. “It’s not an easy or quick process.”

The pandemic and state lockdown also has prompted more restaurants to close. The restaurant association survey from April found that 2 percent of respondents had permanently closed in March, with another 4 percent expecting to close. Examples include Logan, a 16-year fine dining restaurant in downtown Ann Arbor and Grand Central Market and Deli in Grand Rapids.

For an operator who received federal stimulus funds and has that safety net, “the worst of it may be over,” Winslow said.

But overall, he said, even with reopening, “there’s far too much uncertainty.” 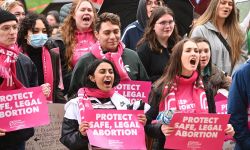