Minutes before Gov. Gretchen Whitmer ordered all state restaurants and bars to close dine-in services Monday morning, Justin Winslow, president and CEO of the Michigan Restaurant & Lodging Association, described to Bridge Magazine the dramatic impact the new coronavirus is already having on the industry. (Shutterstock)

Minutes before Gov. Gretchen Whitmer ordered all state restaurants and bars to close dine-in services Monday morning, Justin Winslow, president and CEO of the Michigan Restaurant & Lodging Association, described to Bridge Magazine the dramatic impact the new coronavirus is already having on the industry.

“We’ve already had restaurants closing,” Winslow said. “People are hunkering down. At the beginning of the weekend, most people were seeing mid double-digit declines. By the end of the weekend, they were seeing revenue losses of 60 to 70 percent. We’re less than a week into this, and already revenue doesn’t justify staying open.”

Winslow said the timing is particularly tough right before St. Patrick’s Day. “If you are an alcohol-driven restaurant, if it’s not your biggest day of the year, it’s in the top three. Your margins for the entire year can be built around St. Patrick’s Day.”

“Most of the focus has been on restaurants, but hotels have been harder hit,” he said. “They are at single-digit occupancy right now, and clearly no events are being scheduled. “There will be a short window where we deal with the virus, itself, but will the recovery take six months or nine months? We really need the governor to sign off on the federal SBA loans that are part of the $50 billion recovery package the federal government announced. Those need to be triggered by the governor. That hasn’t happened, yet, but I’m sure it will. Our members need an infusion of liquidity.”

Last week, JPMorgan Chase revised its economic forecast sharply downward because of the coronavirus pandemic, projecting that gross domestic product in the United States would fall by 2 percent in the first quarter and would fall in the second quarter by 3 percent before growing again in the third quarter by 2.5 percent.

GDP is the total value of goods and services produced. Michigan’s total statewide GDP was $527 billion in 2018, according to federal statistics. A 3 percent quarterly drop could mean a $4 billion hit to the state economy by summer.

A decline in GDP for two consecutive quarters is the definition of recession, but Gabriel Ehrlich, the director of the Research Seminar in Quantitative Economics at the University of Michigan, told Bridge on Sunday that modeling he’s completing suggests the United States narrowly averting a recession.

He said he expects to publicly release his report early this week but provided early details to Bridge. He’s using data from flu epidemics in 1918-19, 1957 and 1958 to build a model of coronavirus economic impact.

Ehrlich said he had been projecting first quarter GDP growth of about 1.8 percent but has revised that downward to 0.4 percent, followed by a second-quarter decline in GDP of about 5 percent and a return in the third quarter to positive growth of about 3.8 percent.

But Ehrlich was quick to say that the spread of the pandemic and related events worldwide and in the nation have moved so quickly and are so fluid that the United States is hardly recession-proof.

“Given how quickly things have evolved, I don’t want to downplay the possibility of recession,” he said. “It’s certainly possible we could end up being in a recession.”

The U.S. economy was strong in January and February, with the February jobs report particularly robust, adding 273,000 jobs as unemployment hit a 50-year low of 3.5 percent.

Ehrlich said there wasn’t much impact on the economy from the virus in the first week of March, so impacts on the quarter will generally only involve three weeks.

“New unemployment claims so far do not show much,” he said.

Ehrlich was relatively upbeat on the pandemic’s impact on Michigan manufacturing.

Ehrlich said the Great Recession of 2008 comes to mind, of course, when considering recession risk now.

“What we are seeing, now, is much more fluid and chaotic than what we saw in the Great Recession,” he said. “The underlying fundamentals now are solid. Whether or not we enter a recession, I don’t expect the effect to be as long lasting or as deep as in the Great Recession. There’s no reason why we can’t start getting back to normal quickly. That’s not to say there won’t be a lot of damage.”

Ehrlich said one mitigating factor is the growth of professional and business service jobs, which are white-collar jobs that allow for some or many workers to work from home and keep jobs even if offices are closed.

“The biggest sector that will be it will be those requiring social interactions -- travel, accommodations, food services,” he said. 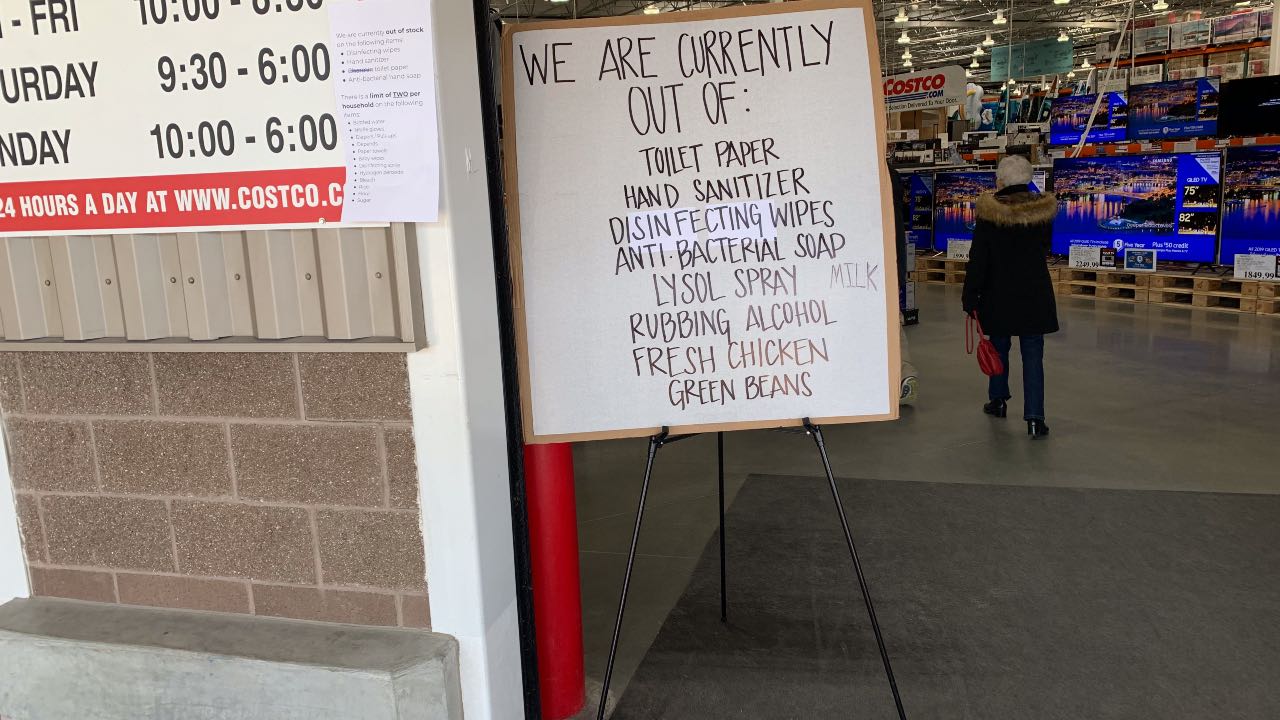 A sign at a Costco in Traverse City listed shortages over the weekend. Across the state, retail stores were out of bread, toilet paper, eggs and milk. (Bridge photo by Robert Campbell)

“As of today, our small business owners are not seeing a large impact, but as we know, the situation is changing by the hour. We will continue to listen to our members as they navigate their way through whatever challenges rise from the coronavirus,” Charles Owens, the Michigan director of the National Federation of Independent Business, said Friday. “Here in Michigan, our small business owners have a heightened awareness and are keeping an eye out for any potential problems.”

The NFIB’s national research center in Washington, D.C., did a random sample of its membership database of 300,000 small-business owners. The survey was conducted by email March 10 and 11, 2020, with 300 responses of owners of businesses employing between one and 120 employees.

Of those businesses negatively impacted, 39 percent said they are experiencing supply chain disruptions, 42 percent slower sales, and 4 percent sick employees. The owners mentioning sick employees said  employees had some signs of cold or flu-like symptoms but hadn’t necessarily tested positive for the virus.

Individual ripples all over the state economy

On Saturday, the Lansing Area Credit Union required that beginning Monday, customers will need to make appointments at their local branch to be able to access the lobby. Customers can use the interactive teller machines in the drive-thru lanes at branches, which connects them to tellers at the credit union’s headquarters.

In Traverse City, the State Theater and the Bijou Theater, two first-run movie theaters downtown run by a nonprofit founded by movie maker Michael Moore, announced they will continue to show movies but are restricting ticket sales to 40 percent of capacity.

Last Wednesday, the CVS in downtown Traverse City had just a few cars in the parking lot and was fully stocked with toilet paper and paper towels. A small bright yellow sale sign on one shelf announce that the  18-roll pack of Scott toilet paper was now $4 off.

Friday, the parking lot was packed, and the toilet paper shelves were empty, the for-sale sign replaced by a large handwritten sign saying because of demand, toilet paper was being stored behind the cashiers’ counter and sale was restricted to one package per customer.

Saturday, the store was nearly out of bread and toilet paper and was out of eggs and milk, a sign on the hamburger aisle said because of demand, sales were being limited to four packages per customer, there had been a run on potatoes and squash and there were lots of empty shelves throughout the produce department.

On Sunday the Munson Medical Center, the largest in northern Michigan, announced it was temporarily postponing all elective surgeries.

Tom Henderson has been a reporter for a variety of Michigan publications for nearly 50 years, including the Detroit Free Press, Detroit News, Corporate Detroit Magazine, the Observer & Eccentric Newspapers, and Crain’s Detroit Business. Officially retired from Crain’s, he continues to write for its monthly regional sections.

Officials said the organizer hung up on a nurse trying to warn others of possible exposure. Another person accused health officials of ‘working for Satan.’ Meanwhile, infections proliferate in the eastern U.P.

How can people on furlough be denied unemployment benefits?
In northern Michigan area and medical field workers. 2 separate people. Have been denied. And how many more?
Please help.