Enbridge Energy technically has one more day to shut down the Line 5 pipeline in the Straits of Mackinac, but even the pipeline’s most vocal opponents acknowledge slim odds that the oil actually stops flowing right away.

In the six months since Gov. Gretchen Whitmer gave Enbridge 180 days to stop transporting petroleum across the tempestuous waterway that links Lakes Michigan and Huron, and the four months since Enbridge vowed to defy her, state officials have been adamant that the order still stands.

This article is part of The Great Lakes News Collaborative, which includes Bridge Michigan, Circle of Blue, Great Lakes Now at Detroit Public Television and Michigan Radio. It unites newsroom resources to report on the most pressing threats to the Great Lakes and drinking water supplies, including pollution, climate change and aging infrastructure. The independent journalism is supported by the Charles Stewart Mott Foundation.

But as for what Michigan can or will do if Enbridge keeps the oil flowing beyond midnight on Wednesday?

Spokespeople for the governor declined to answer questions about their plans, but supplied a written statement noting that Whitmer “stands behind her decision” to cancel the easement that first gave Enbridge’s predecessor permission to build a pipeline along the sandy bottom of the straits 68 years ago.

“We cannot risk the devastating economic, environmental, and public health impacts of a catastrophic oil spill in the Great Lakes,” the statement reads.

Michigan Attorney General Dana Nessel, who is locked in legal battle with Enbridge over the shutdown order, said her office expects to pursue “punitive measures'' if Enbridge defies the order. But first, the state and Enbridge must settle a dispute about whether the case will be heard in state or federal court.

Enbridge officials admit that the idea of constructing a pipeline in the open waters of the Straits would not fly today. But company officials also insist that the current pipeline is safe: constructed of material thicker than most pipelines and watched closely for any sign of malfunction.

And, Enbridge contends, pipeline regulation is a task for the federal Pipeline and Hazardous Materials Safety Administration, not the state of Michigan.

“We will not stop operating the pipeline unless we’re ordered by a court or our regulator, which we think is highly unlikely,” said Ryan Duffy, spokesman for the company.

As the deadline looms, parties on all sides of the debate are bracing for drama in the Straits as activists protest Enbridge’s defiance, while acknowledging that at least for now, it appears likely that Line 5’s fate will be decided over months or even years, in distant courtrooms or administrative proceedings.

‘There has to be a consequence’

Predicting that Enbridge will follow through on its promises to defy Whitmer, environmentalists are planning their response.

Holtz’ group was among those that pressured Whitmer for months to revoke the easement. Achieving that milestone only to watch Enbridge keep the oil flowing, Holtz said, would be a disappointment.

But “we are going to continue holding Enbridge accountable,” he said.

In interviews with Bridge Michigan and Michigan Radio, Holtz and other Line 5 opponents called upon state and federal regulators to step in.

“There has to be a consequence for ignoring the law,” Holtz said.

What might that be? Whitney Gravelle, an attorney and chairperson of the Bay Mills Indian Community, has a few ideas: She wants Michigan to seek an emergency order to shutter the pipeline until a judge issues a final ruling, like the one Nessel obtained last year after Enbridge discovered “significant damage” to one of the Line 5’s underwater spans. Or, Gravelle said, the state could start issuing fines.

“To compare it to other spiritualities, the Straits of Mackinac is our Garden of Eden,” Gravelle said.

In addition to that spiritual significance, the Straits are treaty-protected fishing waters for several Michigan tribes.

Enbridge officials said they’re not bracing for any kind of response from the state. From the company’s perspective, spokesman Ryan Duffy said, it’s Michigan that’s violating the easement.

“Part of the easement agreement is that if there’s something that’s found that the state believes is an issue or a safety issue, they would let us know about it, and then we have a certain amount of time to fix it,” Duffy said.

Whitmer’s order outlined a laundry list of offenses that she and Department of Natural Resources Director Dan Eichinger concluded amounted to “persistent and incurable” easement violations.

But it’s unclear how long the two sides must wait before they’ll argue their points before a judge. Lawyers are engaged in court-ordered mediation while they debate whether the dispute should be settled in state or federal court.

If the case continues in state court, onlookers expect it to reach a state supreme court that became majority-liberal this year when Democratic nominee Elizabeth Welch, a former president of the Michigan League of Conservation Voters, took the bench. In contrast, Republican presidents nominated all five judges in the U.S. District Court for the Western District of Michigan, where Enbridge filed it’s federal suit.

Whitmer’s office has backed up her shutdown order with a plan for how to heat Michigan homes without depending on Line 5 to deliver propane. But Line 5 boosters have criticized the plan as inadequate, and questioned whether it’s deployable in time for the October heating season.

Shutting down the pipeline now, the company and its supporters argue, would create a regional energy crisis and harm U.S. and Canadian businesses that refine petroleum from the pipeline into jet fuel, plastics, fertilizer and other products.

In briefs submitted to the court, lawyers for the state of Ohio, whose governor’s office and legislature are under Republican control, argued a shutdown would have “far-reaching consequences,” leaving Michigan, Ohio, Pennsylvania, Ontario, and Quebec short by a combined 14.7 million gallons of gas, diesel, and jet fuel per day.

And Canada has threatened to invoke a 1977 treaty that specifies “no public authority” in the U.S. or Canada can impede the flow of petroleum products through cross-border pipelines.

Petroleum industry groups and some labor unions have stressed the potential for job losses if the pipeline shutters.

“It would put this place at risk,” said Scott Hayes, the Toledo Refining Company’s health, safety, environmental and government affairs manager, and threaten about 550 direct employees and 600 contractors who work at the site.

Hayes would not say how much of the facility’s petroleum comes from Line 5. Enbridge, likewise, won’t say exactly where Line 5’s product goes and in what quantities, although the company acknowledges most of Line 5’s product is offloaded in Canada. Pipeline opponents cite that opaqueness as reason to doubt Line 5 backers’ predictions of doom.

As for that Canadian treaty? One legal expert told Bridge and Michigan Radio that it likely supersedes state law.

However, the language of the treaty may favor Michigan, said Steven Ratner, Bruno Simma Collegiate Professor of Law at the University of Michigan. That’s because the treaty notes that pipelines are subject to “regulation by the appropriate governmental authorities.”

“If the governor can demonstrate that she's applying scientific standards, that she would close it if there were an identical pipeline that were owned by a Michigan company…(the treaty) gives her a lot of flexibility,” Ratner said.

In an interview with Bridge this week, Nessel said if Canadian officials are worried about the Straits section of Line 5 shutting down, “there’s a really easy fix for that.”

“You can lay a new pipeline on Canadian territory,” she said. “We shouldn't be in a position where Canada stands to gain nearly all the benefit and the state of Michigan bears all the risks” of a potential spill. 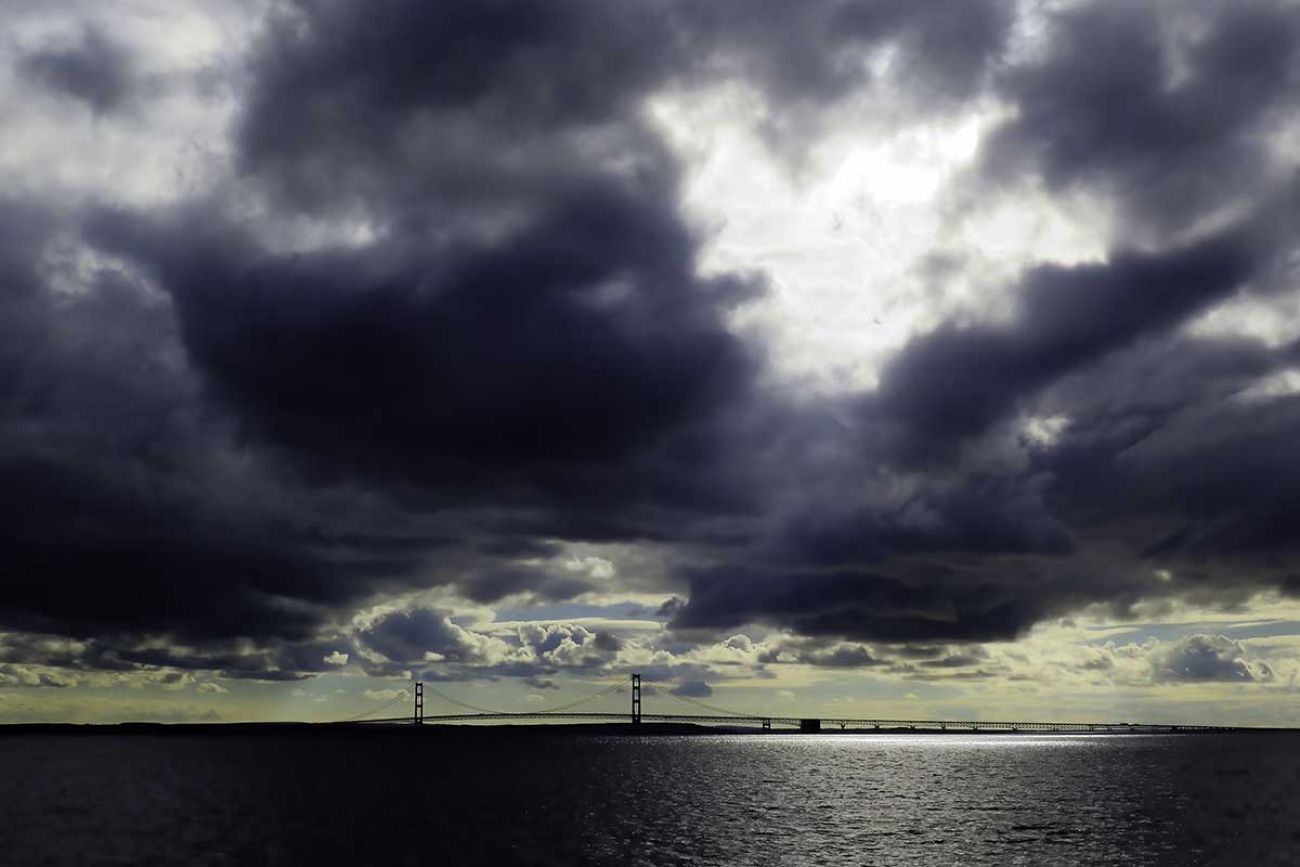 State lawyers say Enbridge has until midnight on Wednesday to cease operating Line 5 in the Straits of Mackinac. But if the company defies that order, it’s unlikely the state will take immediate action to force it. (Photo by Lester Graham, Michigan Radio)

What happens to the Line 5 tunnel?

Whitmer has regularly noted that while she wants the current pipeline out of the water, Enbridge is free to continue pursuing plans to construct a tunnel to encase the pipeline below the bottom of the straits. The company contends this would better protect the pipeline from potential dangers, such as the boat anchors that have sometimes struck the pipeline.

But the company’s original plan to complete the $500 million tunnel by 2024 has become increasingly unrealistic. Company officials acknowledge that both price and timelines are in flux, while pointing to the more than $100 million they’ve spent so far as evidence that they’re still all-in.

Enbridge originally hoped to start construction this year, but it appears the company will be waiting until well into next year to secure permits it must obtain before breaking ground.

State regulators with the Michigan Department of Environment, Great Lakes and Energy approved two key permit applications in January. But the Bay Mills Indian Community has since challenged that decision, arguing EGLE failed to conduct necessary archaeological and cultural investigations in the Straits.

Two other key permit processes are still in their early stages: The Michigan Public Service Commission’s current timeline to decide whether Enbridge can move Line 5 inside the proposed tunnel extends into next year. And the U.S. Army Corps of Engineers is still early in a review that is likely to drag on beyond this year.

Enbridge ordered to retrieve 15,000-lb. anchor from Straits of Mackinac 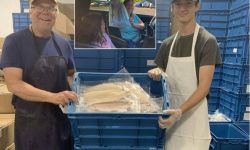 Fish, propane, cash: Not everyone loves Enbridge generosity in the Straits